BJP, Serial Betrayer of Allies, Has Got a Taste of Its Own Medicine in Maharashtra

Not just allies, BJP's brazen sabotage of opposition alliances was also brought into harsh perspective with Fadnavis's resignation on Tuesday.

New Delhi: For former Maharashtra chief minister Devendra Fadnavis, who surreptitiously grabbed power in what can only be described as an overnight coup, the Tuesday press briefing in which he announced his resignation must have been humiliating.

Although everybody knows that nothing in the BJP house moves without the sanction of the Narendra Modi-Amit Shah duo, it was perhaps karmic eventuality that the outgoing chief minister had to accept responsibility for the political fiasco the state witnessed over the last few days.

However, a passing remark by Fadnavis, even as he launched a scathing attack on the opposition forces for stitching up an opportunistic alliance, was on point. He said that had the BJP fought on its own, it would have contested all 288 seats. And that the chances of the party getting a majority would have been much better had it not allied with the Shiv Sena.

A veiled attack on Shah?

One may remember that the Shiv Sena had emerged as one of the strongest critics of the Modi government at the Centre and had announced early in 2018 that it was going to contest the parliamentary polls alone. It was none other than Amit Shah who struck a pre-poll alliance between his party and the Shiv Sena.

After multiple rounds of telephone discussions, Shah had to visit Matoshree, the Thackeray residence in Mumbai, to convince its oldest ally not to contest separately. A large section of journalists and political analysts had then termed the development as BJP president’s “Chanakya Neeti” and yet another one of his “masterstrokes”.

Similarly, Shah was credited for having successfully convinced Uddhav Thackeray to contest only 124 seats, leaving BJP with 164 in the assembly polls. The Shiv Sena was earlier demanding equal distribution of seats but eventually reached an agreement that power will apparently be shared equally by both.

When the coalition pulled off a comfortable majority in the assembly, Shiv Sena insisted on the chief minister’s chair for half the term. It is said that Fadnavis was the one who was vociferously opposed to such strong-arming tactics displayed by its ally. He expected the Shiv Sena to come around but when it did not, he duly tendered his resignation.

However, when Fadnavis was sworn-in as the chief minister in a surprise move in the wee hours of November 23, sources in the Maharashtra BJP claimed that it wasn’t his decision to grab power this way. As a chief minister who had enjoyed a considerably non-controversial tenure, it was a clear dent on his carefully-cultivated clean image. The Supreme Court’s decision to conduct a floor test came only as insult to injury. 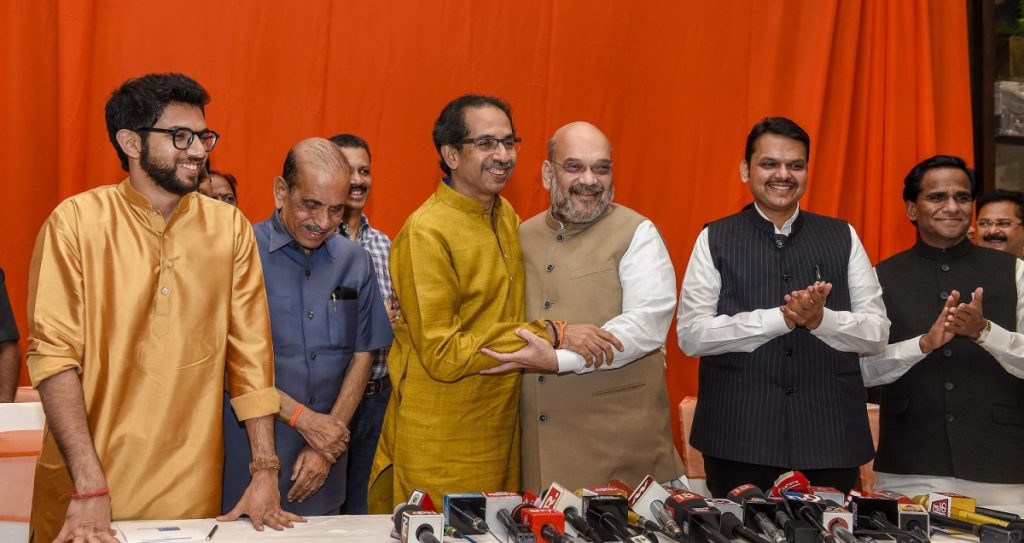 The brazen sabotage of the opposition alliance which was to stake claim the next morning was not so much Fadnavis’ method as much as it was Shah’s. In the pitched battle that played out between the BJP and the rest of the parties, Fadnavis questioning his party’s alliance with Shiv Sena in hindsight raises multiple doubts.

Was it his veiled attack on Shah? Or was it just a way to garner public sympathy?

A taste of its own medicine

Irrespective of inner party dynamics, Fadnavis’ forced resignation was a clear case of the saffron party getting a taste of its own medicine.

BJP, under the leadership of Modi and Shah, has been at the forefront of exploiting the volatility of Indian politics. It has been engineering defections in its favour not only among the opposition ranks – as in Karnataka and Goa – but also its allies.

Let’s look at some of the recent instances in which BJP has blatantly neutralised its fastidious allies.

The saffron party helped split its oldest ally Naga People’s Front (NPF) in January 2018 in Nagaland. It got into an alliance with the NPF faction the Nationalist Democratic Progressive Party (NDPP) and catapulted Neiphiu Rio as the chief minister mid-term.

In Sikkim, the BJP is held responsible for having engineered defections in the Pawan Kumar Chamling’s Sikkim Democratic Front – also one of its oldest allies. After a significant number of SDF legislators joined the BJP, the saffron party entered into an alliance with Sikkim Krantikari Morcha.

In Haryana, the BJP entered the electoral scenario with Om Prakash Chautala’s Indian National Lok Dal as its bigger partner in the alliance. However, as it gained strength, it snapped ties with it. INLD ended up as a marginal force following the arrest of Chautala and his subsequent imprisonment in a teacher’s recruitment scandal.

Similarly, in Maharashtra, the party has been trampling upon the political space of its oldest ally Shiv Sena. Over the last five years, the BJP built its base among extremely backward classes and poor Marathas, a scattered social group which traditionally supported the Sena. The current acrimony between the two parties is more a result of this political enmity than any other immediate cause.

The Modi-Shah-led party will be contesting the upcoming Jharkhand assembly elections without an ally. Both its allies – the Sudesh Mahato-led All Jharkhand Students Union and Ram Vilas Paswan-led Lok Janshakti Party – have walked out of the alliance as the BJP did not give in to their pre-electoral demands.

In Uttar Pradesh, the BJP got help from its ally Suheldev Bharatiya Samaj Party to consolidate its base among Rajbhars, an OBC group, but did not meet any of the demands once it won the assembly elections with a comprehensive majority. Similarly, it poached the Nishad party from the opposition alliance before the 2019 parliamentary polls to consolidate all the fishermen communities but did not allow it to play a prominent role later.

In Goa, the BJP is believed to have created a rift between two of its allies – Maharashtrawadi Gomantak Party and Goa Forward Party (GFP) – after two of the three MGP legislators joined the BJP. (GFP) president Vijai Sardesai accused the BJP of backstabbing the allies.

Who can forget the much-talked about exit of Chandrababu Naidu’s Telugu Desam Party from the NDA. TDP had entered into an alliance with the BJP after the latter had agreed that Andhra Pradesh would be given a special category status. However, it famously didn’t keep its promise. 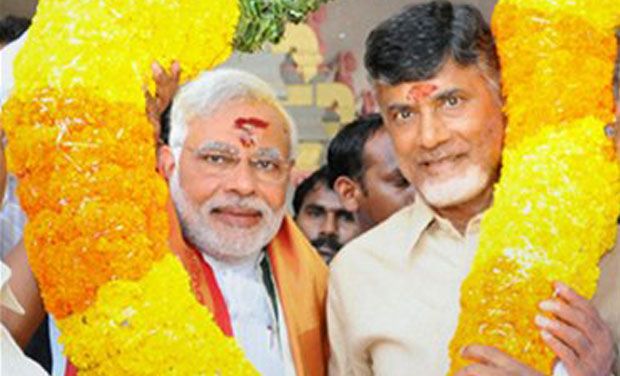 The BJP has been in a strained relationship with its allies Asom Gana Parishad in Assam and Indigenous People’s Front of Tripura. Both these parties were crucial in BJP’s victories in the two states but have been threatening to walk out over the Union government’s insistence on passing the controversial Citizenship Amendment Bill.

One also needs to remember how BJP entered into an alliance with the ideologically opposed Jammu and Kashmir Peoples Democratic Party led by Mehbooba Mufti to grab power in J&K, only to ditch it mid-way through the government’s term. Now when the state has been converted into two Union Territories, the BJP leadership has not hesitated to put Mufti under house arrest. She has been in detention from August 5, as most of the other leaders of the valley.

All is not well when it comes to the BJP-Shiromani Akali Dal’s association in Punjab either. Both the parties have been publicly criticising each other. Similar is the case in Bihar, where more than once the BJP and Janata Dal (United) have taken shots at each other ever since the chief minister Nitish Kumar broke away from the Rashtriya Janata Dal.

Is BJP adhering to coalition dharma?

The principle of coalition is not limited to elections, but also to governance. It is understood that parties come together not merely to win elections but also chalk out a programme which will help them function together as the government. While one party’s political vision may be different from the other, a coalition compels both to walk the middle ground and incorporate each other’s demands in governance.

BJP, under Modi-Shah, has turned into an organisation which believes in complete control. While it has quite promptly taken support from both big and small allies before elections, it has chosen to strong arm its smaller allies with brute force.

With one “masterstroke” after another, Shah has displayed a record of engineering multiple, both likely and unlikely, alliances across India. However, with Shiv Sena and TDP gone from its fold, and others showing their embitterment openly, Shah may also go on to become the party president under whose tutelage the party would lose most of its traditional partners/allies.

What conspired in Maharashtra over the last few days was one of the most brazen displays of power that a party could have brought to use. The BJP-led Centre has walked over political and constitutional norms like never before. Fadnavis may have taken the blame for now but that doesn’t absolve Modi and Shah’s sins.