Why the Manipur Govt Should Rethink the Maharaja Chandrakriti Memorial Park

By prioritising state history over vernacular, local histories, the government may antagonise the state's hill tribes. 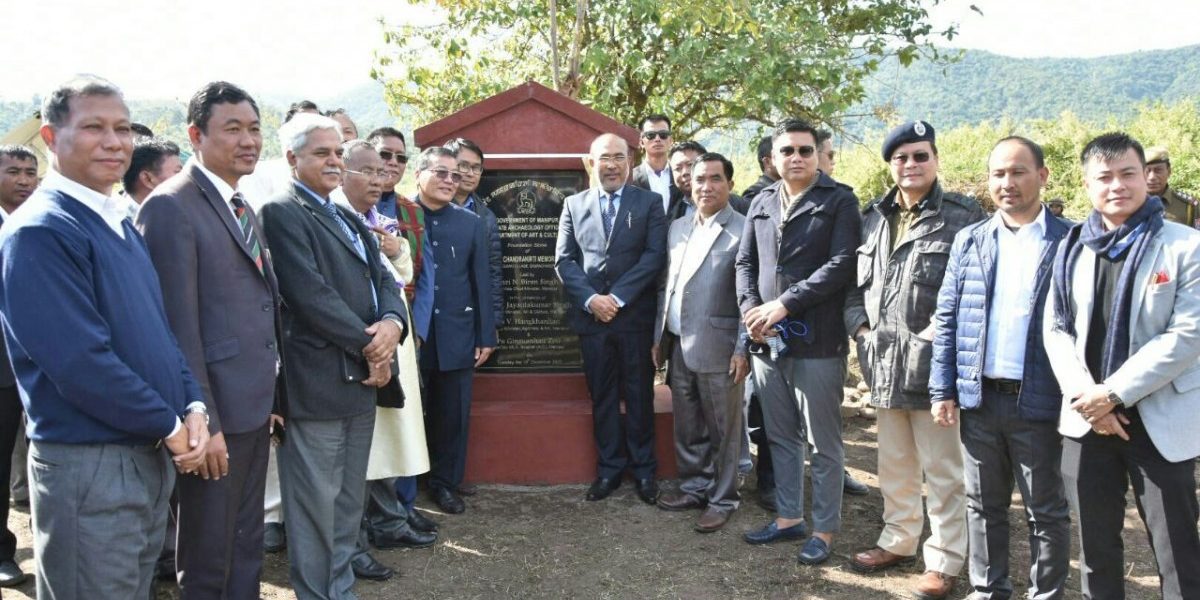 The Maharaja Chandrakriti Memorial Park at Chivu Lake, Churachandpur district in Manipur, along the Indo-Myanmar border, is set to be inaugurated soon, as construction comes to a close. The foundation stone for the park was laid on December 19, 2017. The park will house stone inscriptions commemorating a supposed victory of Manipuri King Chandrakriti Singh over the Lushai chiefs during the Lushai Expedition of 1871-72, a salt brook and the Chivu Lake.

However, a recent press release from a powerful tribal chief association has expressed deep resentment at the memorial.

In a press release dated April 26, the Zomi Chiefs’ Association, which comprises over 160 Zomi tribal chiefs in Manipur, expressed its displeasure at the proposed Maharaja Chandrakriti Memorial Park being constructed on the grounds, saying that the inscriptions amount to historical distortion. The park commemorates the capture of Guite chief Raja Goukhothang by Major Sawai Chumba and Major Thangal under the command of Major General Nuthall in 1872. The chief died while in prison.

Also read: Punjab: How One Northeastern Woman is Countering Racial Abuse With Compassion

In a multi-cultural state like Manipur, with dynamic ethnic faultlines, this commemoration raises larger questions of the place of vernacular histories and historical imagination. It suggests that a dominant community yielding political power portray Manipur’s social identity as the same as that of the state’s valley, which is one-tenth of Manipur’s geographical area. Speaking at the foundation stone laying ceremony in 2017, the chief minister had said that the Churachandpur-Behiang road would be “developed as the second corridor of the State to South East Asian Nations in the light of implementation of government of India’s Act East Policy.” A Border Trade Centre on Behiang is also being planned for Indo-Burma trade on the lines of Moreh.

With the Act East Policy being accelerated under Prime Minister Narendra Modi, new tensions and contestations are bound to increase as various groups attempt to consolidate their control and stake claim to developmental benefits. Developments such as the Maharaja Chandrakriti Park need to be understood in that context.

A closer look at the events around the Lushai Expedition 1871-72 highlights the complex relationship the Manipuri state has with its hill tribes. It is a fraught relationship, and the state finds itself grappling for a lasting solution even today.

During the Lushai Expedition of 1871-72, the Manipur Contingent under Brigadier General Willian Frost Nuthall, the then Political Agent of Manipur, was instructed by Brigadier General G. Bourchier who was heading the Cachar column, to march south in order to prevent any alliance between the Kamhau-Suktes and Lushais.

Maj Gen Nuthall went beyond Bourchier’s orders and stationed as far as Chivu. However, with the success of the Expedition’s Eastern and Western columns, by March 6, 1872, Nuthall was informed that the services of the Manipur Contingent were no longer required.

The next day, the camp encountered Raja Goukhothang of Mualpi, with over 900 followers. Thinking of the Manipuri camp as friendly neighbours with whom the Kamhau chief had made peace in 1857, Goukhothang unsuspiciously complied with the Maharaja’s majors’ orders. He was subsequently arrested and imprisoned in Imphal, where he died in 1873.

The stone inscriptions at Chivu misrepresent the victory of the British over the Lushais as a victory of the Manipur Maharaja. Commemorating the event in this way highlights the overriding predominance of state history over vernacular local histories.

Also read: Ground Report: As a Railway Line Grows, a River in Manipur Is Fighting for Survival

Whether Manipur intends to continue to see itself as having a singular historical heritage or recast itself as a new Manipur which is accommodative and inclusive, only its actions will tell. It is in the context of this emerging political landscape that the Maharaja Chandrakriti memorial becomes an important one. It has the potential to do more harm than good in terms of building confidence with the hill tribes.

If chief minister Biren Singh is serious about bridging the gap between the hills and the valley in Manipur, and pursuing the cause of chingmi-tammi amatani (hill and valley people are one), he will do well to be sensitive towards vernacular histories.

After coming to power in 2017, Singh has initiated bold and innovative policies such as ‘Go To the Hills’ and a fortnightly Hill Leaders Meet, which were well received and appreciated by the hill tribes. In addition to these, he has been relatively successful in preventing any major highway blockades in the hill districts.

With an impressive record in reaching out to the hill tribes, and a keen eye on taking Manipur to the national and global stage, no chief minister would risk the opportunity to usher in a long-lasting peace and mutual understanding. The current misadventure in Maharaja Chandrakriti Memorial Park could destabilise the delicate ethnic relations and undo hard-earned peace.

Golan Suanzamung Naulak is a political analyst and writes on the politics and development in North East India.