MP: Behind the BJP's Luring of Congress MLAs, a Bid to Reduce Scindia's Influence

Even though the BJP needs to win just nine out of the 27 vacant seats, it has been relentless in engineering defections from the Congress. Bhopal: After two Congress MLAs defected to the BJP in a span of a week, the remaining legislators of the grand old party on July 19 took an oath to stay with the party in a meeting held at the Bhopal residence of the Madhya Pradesh Congress Committee chief and former chief minister Kamal Nath.

On July 12, Congress legislator from Bada Malhera constituency Pradyuman Singh Lodhi was the first to quit the party and join the BJP. The party suffered another setback on July 17 when Nepanagar MLA Sumitra Kasdekar tendered her resignation and defected to the BJP.

To stop this flow, Kamal Nath came up with the idea to administer an oath to the MLAs that they will not break away. However, this idea seems not to have proven effective, as within four days, another MLA – Mandhata’s Narayan Patel – joined the BJP.

In effect, the series of defections from the Congress that began with Jyotiraditya Scindia’s exit is worsening.

In March, 22 Congress legislators – including six Scindia loyalist ministers – had resigned from the party and joined the BJP, toppling the Kamal Nath government. So far, 25 MLAs have deserted the party. Besides, two seats were already lying vacant owing to the death of two MLAs.

With the BJP claiming that it is in touch with even more Congress legislators, the situation only looks grimmer for the grand old party.

State cooperative minister Arvind Bhadoria had claimed while welcoming Sumitra into the party, “Some more Congress MLAs are due to join the BJP soon.”

Interestingly, Bhadoria was the one to induct Narayan Patel into the BJP. Meanwhile, Govind Singh Rajput, a supporter of Scindia, who was handed the transport portfolio after joining the BJP, had also claimed earlier that three other Congress MLAs are in touch with the BJP.

Similarly, former minister and MLA Rampal Singh – considered a close associate of chief minister Shivraj Singh Chouhan – said in a public meeting that several Congress legislators are in contact with the BJP.

Experts also believe that the exodus of MLAs from the Congress will not end anytime soon. “There is definite information about five or six Congress MLAs in talks with the BJP,” claims senior journalist Rakesh Dixit. “At least two or three are bound to be lured.”

The 230-member house currently has only 203 members, while 27 seats are lying vacant. The BJP has 107 MLAs, as well as the support of two BSP, one SP and three out of four independent MLAs, which raises its strength to 113.

In the by-elections, the BJP needs to win just nine of the 27 seats to have an outright majority on its own. If it decides to rule with the support of MLAs who are independent or from smaller parties, it only needs to win three seats. Despite being so close to having the majority, why then is the BJP eyeing Congress MLAs and luring them to change sides?

“In the assembly elections of 2018, the victory margins of MLAs who defected with Scindia were small,” explains the state Congress spokesperson Ravi Saxena. “Some won by 1,000 votes, others by 2,000 or at the most 5,000. When they visit their constituency to seek votes for the upcoming bypolls, they are likely to face public displeasure.”

“The BJP fears that if these MLAs are defeated in the elections, its government will be in trouble,” he adds. “As a result, they are targeting greedy MLAs, inducting them into the party in the morning and handing them portfolios by the evening.”

This was a reference to Lodhi’s defection. Soon after he joined the BJP, he was inducted into the cabinet and bestowed the charge of civil supplies corporation. Meanwhile, reports suggest that Sumitra will be appointed as the chairman of a corporation or board.

“In this way, more by-polls will be conducted and it will get easier for the BJP to field more MLAs and have a greater chance of winning,” Saxena further adds. “Until a few days ago, they had to win nine out of 24 seats, whereas now they have to win nine out of 27. While we had to win 24 seats earlier, now we must win 27.”

“They are taking complete advantage of being in power for horsetrading MLAs,” he says. “They are luring our legislators with money and positions of power and in the process, murdering democracy.”

However, these developments could also be seen from a different perspective. Rather than leaning on Scindia to prop his regime up, it is possible that Shivraj Chouhan wants to become atmanirbhar and is engineering Congress MLAs who are not loyal to Scindia into his camp. To understand this, the assembly math needs further elaboration.

In a 230-member assembly, a party needs 116 MLAs to form the government in Madhya Pradesh. The BJP currently has 107. In the by-polls, it will need to win nine seats, which the supporting MLAs of Scindia will ensure.

The loyalty of these legislators lies with Scindia and not the BJP. As a result, the Chouhan government will remain hinged on Scindia and the BJP will need to heed Scindia’s demands.

This arm-twisting by Scindia is now causing unrest among BJP leaders who have been in the party for longer. In order to curb the influence of Scindia, the party has devised the strategy to lure in more Congress MLAs.

“With these new defections, the math becomes easier for the BJP,” says Rakesh Dixit. “If it wins these three seats, its count will go up to 110. If a few more MLAs defect and manage to win the by-polls, the BJP will have 114-115 MLAs without Scindia and his men. It already has the support of two BSP, one SP and three independent MLAs. That takes the count to 120-121. In such a situation, it will no longer need Scindia’s help or need to bow to his pressure.”

“There is resentment in the BJP against Scindia’s attitude,” he adds. “Jaibhan Singh Pawaiya, Ajay Vishnoi and Gauri Shankar Shejwar are making public statements against him, while Chouhan finds himself under duress. So, the BJP is now aiming to kill many birds with a single stone. Firstly, it will dilute Scindia’s hold over the government. Secondly, it will clip his wings and thirdly, the government thus formed will have no threat. Finally, it will also weaken the Congress and break its morale before the elections.”

Surprisingly, the Congress has allowed the BJP to walk all over it. Kamal Nath, who had claimed in 2019 that several BJP MLAs were in contact with him, has been unable to keep his legislators from switching sides. Instead of stopping them from breaking away, Kamal Nath reportedly said, “I am not worried about those who have left (the party).” Nath had also made a similar remark about Scindia.

The former chief minister claims that he was aware that some MLAs would leave the party. Why then did he not make any attempt to stop them?

After two MLAs quit the party within a week, instead of taking any steps to stem the flow, Kamal Nath was only making statements or ‘hoping’ that no others would follow after swearing an oath of allegiance.

His ‘careless attitude’ has invited criticism from within the party ranks. Several senior leaders of Congress are of the view that Kamal Nath’s arrogance is harming the party.

On the condition of anonymity, a senior Congress leader said that Nath’s behaviour is not acceptable. “We should be encouraging those MLAs who are still with us and instil enthusiasm in them. But if it continues this way, more MLAs are bound to break away,” the leader said. 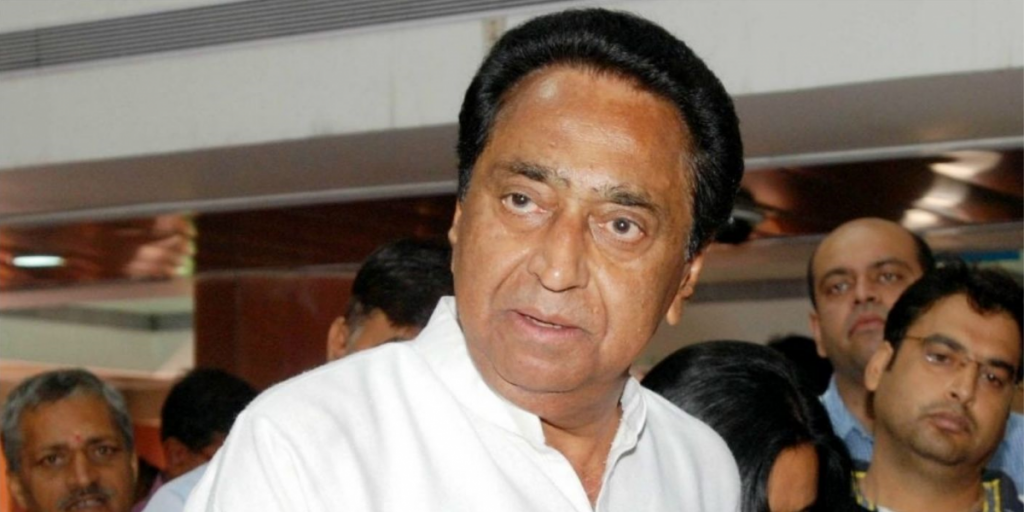 Another leader, also on the condition of anonymity, said that the government fell because Kamal Nath had cornered all the important posts. “If some 200 posts were distributed among top leaders and disgruntled MLAs, perhaps the situation would not have gone out of hand for the party,” the leader said.

To stop its remaining MLAs from hopping, the Congress, apart from administering an oath of allegiance, has framed a policy that all the bigwigs of the state unit will watch out for the MLAs in their respective camps.

Hence, leaders like Kamal Nath, Digvijay Singh, Ajay Singh, Arun Yadav and Suresh Pachauri will be responsible for retaining the legislators who were granted tickets on their recommendation.

It must again be pointed out that Arun Yadav was unable to prevent the defection of Narayan Patel, who is from his camp. It is reported that Patel switched off his phone and disappeared on July 22 and the next day, he reappeared and announced his decision to quit.

If one examines the profile of Congress legislators who are in exodus, nearly 50% are first-timers. In Scindia’s camp, nine MLAs had entered the assembly for the first time. In fact, the latest to leave the party – Pradyuman Singh Lodhi, Sumitra Kasdekar and Narayan Patel – are all newcomers.

Therefore, some are arguing that in order to return to power in the state, the Congress had fielded candidates who necessarily did not believe in the party’s ideology. As a result, they drifted towards the side which offered them the chance to remain in power.

A Congress leader who is part of the MPCC said on the condition of anonymity that many leaders consider their supporters above the party and prioritise their interests. “Secondly, the current condition of politics is such that many are easily influenced by money and muscle. The one who has both of these enters the fray. Such people have no ideology of their own, nor are they concerned with the party’s ideology. If it affects their business, they will switch sides to remain in power.”

In this context, it must be recollected that during the distribution of tickets for the November 2018 elections, Kamal Nath had reportedly said, “No matter how many cases are registered against them, they should be a winning candidate.”

Perhaps in his eagerness to win, Kamal Nath did find winning candidates but failed to ascertain their commitment to the party.

Pradyuman Singh Lodhi is one example of this conundrum. Lodhi joined the Congress right before the assembly elections and remained with the party as long as it was in power. The moment the government changed, he defected and became a cabinet minister.

The journalist Rakesh Dixit agrees. “Many who were elected on the Congress’s ticket do not believe in its ideology. How many of them know about the ideology of Nehru or Indira? They merely joined the party because of the anti-BJP wave in the state.”

However, there could be other reasons behind the exit of Pradyuman and Sumitra.

Pradyuman Singh Lodhi was elected from Bada Malhera, a seat from which former chief minister Uma Bharti contested the elections in 2003. Bharti is the tallest Lodhi leader in the state. She was miffed over the lack of representation of Lodhis in the cabinet expansion. Pradyuman admits that it was Bharti who brought him into the fold of BJP. In the case of Kasdekar, an associate of hers was arrested earlier this month with fake currency worth more than Rs 10 lakh. Her name was highlighted in the case and the BJP had used it to attack the Congress. Besides, according to a Dainik Bhaskar report, Sumitra has a case of a forged caste certificate against her at the Jabalpur high court, filed by former BJP MLA Manju Dadu. It is speculated that Sumitra joined the BJP to clear her name in both the cases.

Deepak Goswami is an independent journalist.