The students, members of the Samajwadi Party's student wing, have been charged with serious crimes, including rioting, after they raised black flags at a campus event featuring Adityanath. 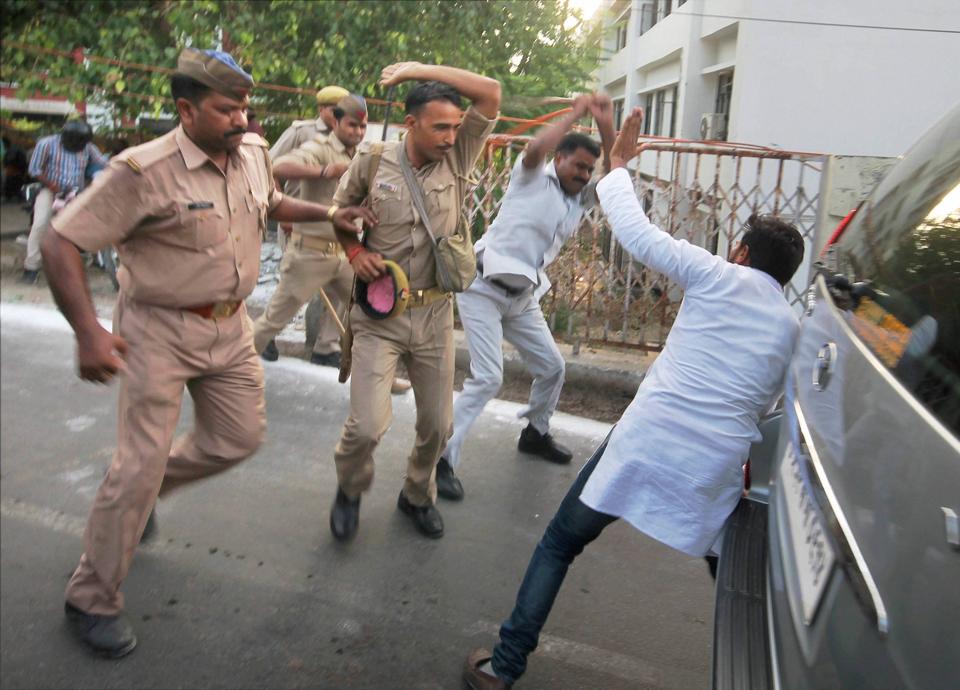 New Delhi: With the incarceration of 11 students of Lucknow University entering the fifth day, the Samajwadi Party (SP) is contemplating a nationwide agitation on the issue. The students were arrested after they showed black flags and blocked the way of UP chief minister Adityanath’s convoy at a function organised on campus.

The students, who belonged to Samajwadi Chhatra Sabha, the student wing of the SP, have been slapped with serious charges by the police, making their release difficult. SP leader and former president of the Allahabad University students’ union Richa Singh told The Wire that the police not only assaulted the students who were holding a peaceful protest, but also charged them under some serious sections of the Indian Penal Code including rioting.

“The students were raising some demands pertaining to the campus and sloganeering about fundamental problems. But the Yogi Adityanath government, which is completely against the democratic rights of students, has charged them with serious crimes,” she said.

During the protest, the students had waved black flags, which Singh said was a completely justified form of peaceful and democratic protest. As another party leader, Shahid Ahmad had pointed out, the students were upset at the “double standards” of the university administration – saying they were not releasing funds for several genuine demands while opening up its coffers for the function attended by Adityanath to commemorate Maratha ruler Chhatrapati Shivaji.

The Lucknow police, while accusing the students of rioting, had also called the incident a “security breach”. Ridiculing this argument, Singh said the students who have been arrested include two girls. “They were beaten by at the protest site and also later by the police. The sessions court had rejected their bail plea and all of them were remanded to jail. In the jail they have all been kept in the same barrack. Our leaders had visited them yesterday and today we would be again moving a court to seek their release,” she said.

Following the visit, party spokesperson Rajendra Chaudhary had demanded the immediate release of the students, saying his party would not surrender before the atrocities of the BJP government. Chaudhary, a former jail minister, said the students were protesting peacefully on June 7 and yet they have been dealt with so severely. “We will not allow anyone to play with their careers,” he said, accusing the BJP of not being sympathetic towards the youth and students.

Singh, with her experience as a student leader, said it is common for students to hold black flag protests to press for their demands. “Usually after being detained by the police, the students are released in the evening. But in this case, the police was obviously acting under pressure from the government. Adityanath also accused the students of being anti-nationals and supporting Naxal ideology during his speech. So we are not surprised that the police acted so tough against them,” she said.

The SP leader said the manner in which the students have been treated, the way in which serious charges have been levelled against them and the decision of the university to suspend them all speak about the intolerance which is pervading the state. “But when the chief minister is himself known for his hate speeches and anti-minority statements, what can you expect from the government,” she said.

Adding that all the protesters were students in the 18-24 age group, she said the party would not allow anyone to play with their careers. While it has already held protests on the issue in Delhi and Lucknow, she said it would intensify the agitations across the country if they are not released soon.