Loyola College Under Attack From BJP Over ‘Derogatory’ Paintings of Bharat Mata, Modi

The Chennai college has removed the objectionable paintings and issued an apology.

New Delhi: Chennai’s Loyola College issued an apology on Monday after coming under attack from the right-wing for displaying ‘derogatory’ paintings of Hindu gods, the nation and the prime minister on its campus.

According to an Indian Express report, several leaders of the BJP and RSS slammed a recent art exhibition as being “poor in taste,” “derogatory in nature” and an attempt to malign Prime Minister Narendra Modi.

Legal action was also demanded against the 94-year-old missionary college.

On January 19-20, the college held a folk festival called Veethi Virudhu Vizha and on its sidelines, a painting exhibition was organised which included works on caste and sexual violence, atrocities on the marginalised. There were also paintings on how the voices of those who speak up are being muzzled.

Among the paintings that started the controversy, was one depicting Bharat Mata as a victim of the MeToo movement. Another, titled ‘Rafale Deal’, shows the petals of the lotus – BJP’s symbol – as rats, Firstpost reported. 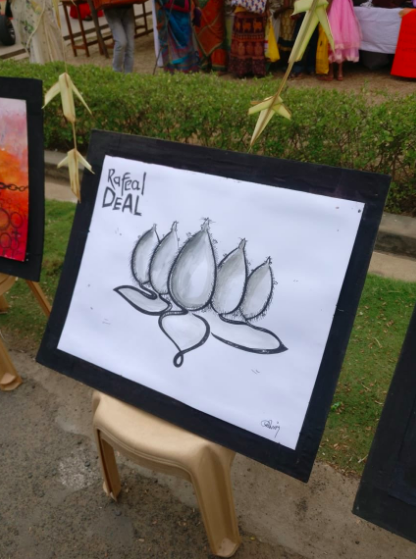 While the saffron party immediately swung into action with its national secretary H. Raja filing a police complaint against the organisers, the college, in its attempt to distance itself, claimed those behind the event “misused” the venue.

Raja also claimed the exhibition had been organised by Naxals who force conversion to Christianity and insult Hindus.

Shocked by the vulgarity of the presentation..it is not just anti Hindu but antI National. Loyola and the church can either apologise or feel proud to be part of the liberal and anti Hindu gang that hates Hinduism & India for being a majority Hindu nationhttps://t.co/4qXQDRsUJ1

Tamilisai Soundarajan, Tamil Nadu BJP president, reportedly said:  “My blood is boiling seeing these paintings. They have insulted our Bharat Mata. I demand an apology from the Loyola Institution or else BJP will stage a huge protest.”

Kaleeswaran, the coordinator of the Art and Literary Unit at the college said in a statement: “We do not advocate or support anything that tantamounts to disturbing the peace and tranquillity of the society that we render our service to. We are deeply pained, saddened and equally anguished that the venue to conduct a cultural event, Veethi Virudhu Vizha, held on January 19 and 20 2019, has been misused.”

According to Deccan Herald, noting that the college has taken down the objectionable paintings, Kaleeswaran further said the institution “sincerely apologise” for the “insurmountable hurt” it has caused.