Love and Hate in Hyderabad: The Incendiary Political Life of Akbaruddin Owaisi

From nearly parting ways with the AIMIM because of his marriage to a Christian woman and being jailed for hate speech, the younger Owaisi is an enigmatic figure.

Hyderabad/New Delhi: Akbaruddin Owaisi – four-time MLA, and floor leader of the All India Majlis-e-Ittehadul Muslimeen (AlMIM) in the Telangana Assembly – has been in the national eye for about ten years. In his home town of Hyderabad, however, he has commanded attention, suspicion and admiration for almost three decades.

In April 2011, Akbaruddin was attacked while traveling in his constituency, Chandrayangutta. In 2012, an inflammatory speech in the town of Nirmal put him in jail for 40 days, booked for hate speech. In 2007, he had threatened the Bangladeshi writer Taseema Nasreen. Nasreen was then assaulted by AIMIM legislators while she was in Hyderabad to release the Telugu translation of her book Shodh.

There are now 14 cases criminal cases against Akbaruddin, filed in different parts of the country, most for promoting enmity between different (religious) groups and for disobeying law-and-order authorities. According to a close aide, Akbaruddin believes that “hamari qaum jazbati hai isiliye uske jazbat ko bedar karna padta hai [Our community is emotional; hence we have to arouse it].”

Also Read: If BJP Wins in Telangana, Owaisi Will Have to Flee Hyderabad: AdityanathAkbar’s personal and political life has been dramatic, compared to his elder brother, Asaduddin, the liberal face of the party. He was born in 1970, and grew up in an atmosphere of communal frenzy before and after the Babri Masjid demolition. In Mumbai, during the riots, he helped the party distribute relief, while Asaduddin, now the party chief, was in London studying law. The division of labour among the brothers has been clear ever since. A third brother, Burhanuddin, edits Etemaad, an Urdu daily published by the family.

Since he was a teenager, Akbar had accompanied his father Salar Salahuddin Owaisi, widely known as just ‘Salar’, to meetings and jalsas. But his disinterest in finishing medical school, and a love affair with a Christian woman – whom he married in 1995 – came between them. 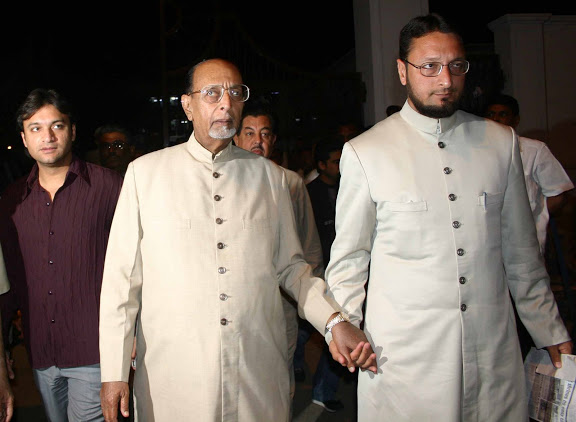 Akbaruddin (left) had strained relationship with his father Salahuddin Owaisi (centre). To the right is Asaduddin Owaisi. Credit: twocircles.net

Return of the prodigal son

Those years apart, however, were a time when Salar badly needed Akbar to defeat Amanullah Khan, a former confidante of the Owaisi family and a five-time MLA from Chandrayangutta.

Amanullah was a firebrand populist, admired for giving a tough time to the BJP’s own firebrand in the area, Tiger Narendra. In 1993, Amanullah, along with Mumtaz Ahmed Khan quit the AIMIM and founded the Majlis Bachao Tahreek (MBT). The Owaisis’ party was reduced to just a single MLA, Asaduddin, in the elections the next year. However, Mumtaz re-joined the party almost at the same time when Akbar made peace with his father.

“Salar knew only Akbar can defeat the firebrand Amanullah and he was right,” said journalist Mir Ayyob Ali Khan. After Akbar and Sabina had child, however, they reunited with the family – and Akbar led the charge to bring the party back to relevance.

“In 1999, he not only defeated Amanullah,” said Mir Ayyob Ali Khan, “He also made sure that the MBT could never make major inroads again.”

With Akbar’s patch up with the family and the return of Mumtaz Ahmed Khan, the AIMIM regained its stride in the 1999 polls. It began growing not just in Hyderabad, but across the erstwhile Nizam state, including in Aurangabad, across state lines. The party now has 7 MLAs in Telangana, which it has won during the last two elections.

Akbar is an orator – best known nationally for his inflammatory performances before crowds, but admired in the assembly for well-researched and articulate speeches. He recently started the Habeeb-e-Millat Political Research Centre to support his legislative work and public career.

This quality is something his older brother acknowledges, if not envies. In a recent interview with Kunal Kamra, he said, “Yes, I accept that he is a great orator – he is a better orator than me. In fact, I would say that he is much better politician than me.”

In AIMIM’s lingo, Akbaruddin is addressed as Habeeb-e-Millat and Asaduddin as Naqeeb-e-Millat, while in local parlance they are known as Chhoti Sherwani and Badi Sherwani respectively. 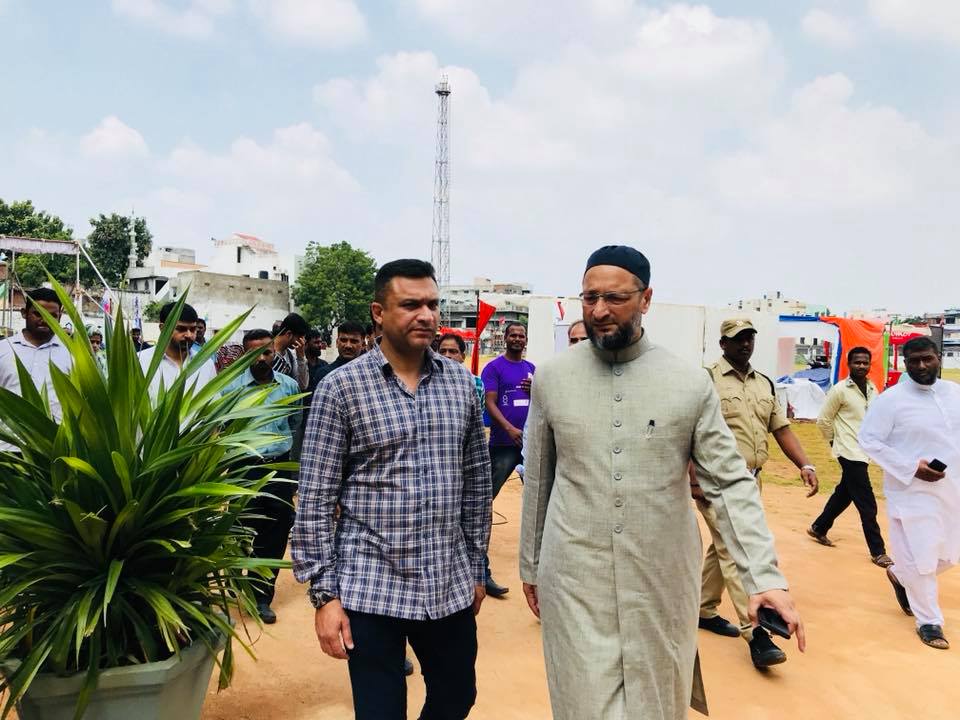 Apart from his speeches, much of the strength and popular support he draws from the people is due to the philanthropic work he and his party are involved in. According to party sources, he runs a number of educational, financial and welfare institutions in different parts of Hyderabad. In addition to his political activities, he currently is the managing director of Deccan College of Medical Sciences and Allied Institutions, run by Darussalam Educational Trust (DET). The trust also runs a number of institutions.

However, not everyone in the city is ready to buy his claims of involvement in welfare activities. Arch-rivals from the MBT dismiss them as propaganda; other critics ask what he has done in his capacity as an MLA. A local journalist who has followed the party told The Wire that, even as Akbaruddin’s private schools and institutions flourish, government schools in his constituency have suffered.

Critics also question the source of funds for Akbar’s philanthropic activities. A source in the party confided that, “There are multiple sources of funds, from real estate business, to income from management quota donations of medical and engineering colleges.”

“Even the reason behind the fatal attack on Akbar was some land deals,” a journalist told The Wire – an allegation indicated in a report in India Today. The family have been accused of land grabbing, and as the Deccan Chronicle recently reported, the “Owaisis get costly land dirt cheap for hospital”. 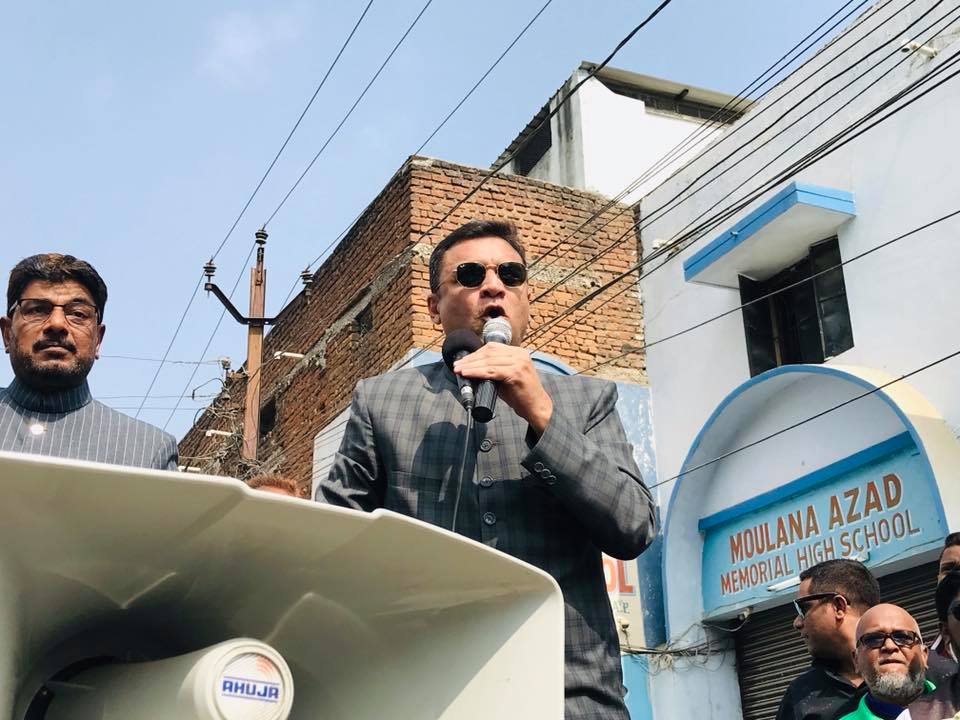 His voters, however, seem to believe that even if these allegations are true, they are not exclusive to Akbaruddin. Many of them told The Wire that what matters most is that representatives (corporator and MLA) are available when they are needed, and fulfil their basic duties.

Akbaruddin and other elected members of the party know this very well. Hence, they ensure that they remain accessible to their voters and supporters. “In my understanding, AIMIM’s leaders are the most accessible. And they continue to win because they get the basics done,” said public transport expert Ratnam.

According to a recent Times of India report, “…three MIM legislators were on top of their game by utilising by a major share of funds from their MLA quota on infrastructure development and improvement of sewerage and water supply network during their tenure.”

Also Read: Star Campaigners, Communal Messaging Unlikely to Brighten BJP’s Prospects in TelanganaAkbaruddin takes special interest in his constituency. Most of his private welfare activities are concentrated there. His constituency is known for having the most flyovers in the city. While he is not accessible to the media, he is constantly in touch with his voters and supporters. During this election, though there is no real contender against him, he campaigned continuously, from 8 am to 11 pm, while also participating in party-work.

One certainty about the Telangana assembly polls, due on December 7, is that Akbaruddin will not be defeated – and he and his supporters know it. That was why, at his nomination rally on November 17, they were playing Bollywood numbers like, ‘Mein Hoon Don’ and ‘Chali Chali Re Patang’ as he paid salaams in trademark Hyderabadi style.