Opposition leaders had said the home minister should not be allowed to introduce the Bill as it is unconstitutional. 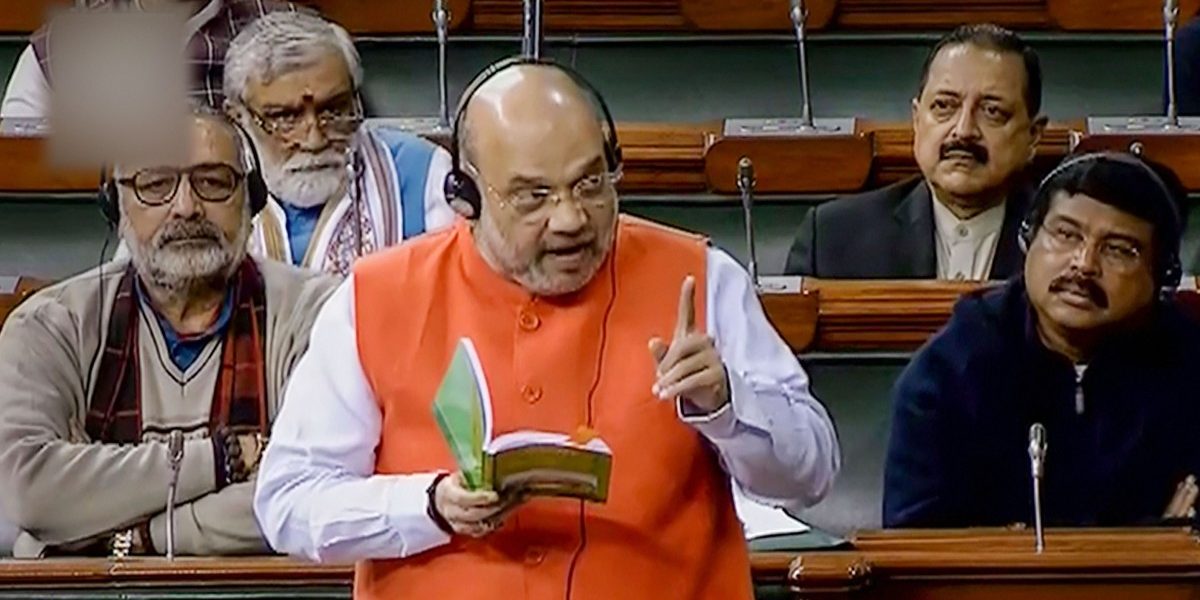 New Delhi: The debate on the controversial Citizenship (Amendment) Bill, 2019 began in the Lok Sabha early on Monday evening, with Union home minister Amit Shah taking the floor to defend the Bill.

The Bill grants Indian citizenship to immigrants from six non-Muslim religious communities coming from Pakistan, Afghanistan and Bangladesh. It has been criticised as being blatantly communal and anti-Muslim.

“This is not our political agenda,” he continued. “It was our electoral promise; it is the will of the people.” Shah has argued that the Bill makes a “reasonable classification”, and so doesn’t violate the constitution.

Shah also said the concerns of Northeastern states had been addressed. “Manipur will be brought under the Inner Line Permit system, which has been a longstanding demand.” The Bill has been widely protested in the Northeast, particularly Assam, as it violates principles of the Assam Accord.

Manish Tewari of the Congress spoke after Shah, calling the Bill unconstitutional. Both Article 14 and Article 15 make this Bill against the idea of India and its founders, he said. “When can’t discriminate among citizens, how can discriminate while granting citizenship?” Tewari asked. “Reasonable classification means that equals can’t be treated as unequals, and when a refugee comes to India, we can’t decide on their treatment on the basis of religion.”

Dayanidhi Maran of the DMK too opposed the Bill. “You have not done anything to prove to Muslims in India that you support them,” Maran said. “Is it a crime to be a Muslim?”

Maran also accused Shah of dividing minority groups. Christians were not part of the Citizenship (Amendment) Bill as set out in the BJP’s manifesto, but have been included in the final Bill. “You are first finishing the Muslims, and then you will turn to the Christians.”

“You are not home minister only for those who voted for you,” he said to Shah.

West Bengal MP Abhishek Banerjee attacked the government for its divisive policies: “The government would like you to believe that the NRC and CAB should be seen separately.”

He added that if the government is so worried about persecuted minorities, “what about the Tamil and Muslim minorities of Sri Lanka?”

Speaking for the YSR Congress, MP Midhun Reddy said that his party also supports the Bill.

Midhun Reddy,YSRCP in Lok Sabha: We support this bill but we have certain concerns also, we expect Govt to take note of our concerns. Even among Muslims there are sects which are persecuted, we request Govt to also treat them at par #CitizenshipAmendmentBill2019 pic.twitter.com/hg0O5aQFG3

Shiv Sena MP Vinayak Raut asked about the pressure the Indian economy would come under if a lot of refugees start pouring in. He said that Afghanistan should be deleted as well if Sri Lanka in not included.

“And if these people are being given citizenship, that is fine, but don’t give them voting rights for 25 years,” he said.

The Samajwadi Party and Mayawati’s Bahujan Samaj Party have also voiced their opposition to the Bill, as did IUML through its MP P.K. Kunhalikuty.

Afzal Ansari, BSP in Lok Sabha: The National President of BSP, Mayawati ji had earlier only stated that #CitizenshipAmendmentBill is unconstitutional & opposed it. Today as well, we stand here against the bill. pic.twitter.com/4P9NNvZ6BW

From the Congress, Adhir Ranjan Choudhary spoke against the Bill and asked whether those who were born in India to illegal migrants would become stateless. he also asked about the necessity to bring about a Bill that is based on religion instead of simply providing refuge to those in need, whatever their religion may be.

“We are opposing the bill because it is discriminatory in nature. It wreaks havoc on the very foundations of the Constitution. This is a step towards Hindu rashtra. India should maintain the essence of humanity,” Chowdhury said.

Supriya Sule, NCP on #CitizenshipAmendmentBill2019 in Lok Sabha: Entire ethos of our democracy is equality and talking about Article 14&15, I am not convinced by Home Minister, it will be struck down in Supreme Court. I request him to rethink of it and please withdraw the bill. pic.twitter.com/Z8POt0vk2y

Tearing a copy of the proposed Bill, AIMIM leader Asaduddin Owaisi said, “Don’t include Muslims. But why do you hate Muslims so much? What is our crime?”

“This law is aimed at a second partition. It’s worse than Hitler’s law,” he added.

Meanwhile, West Bengal Chief Minister Mamata Banerjee said the NRC and the CAB will never be allowed in Bengal as long as the TMC is in power.

“Its a divisive bill and shall be opposed at any cost,” she said in Kharagpur while claiming that at least 30 people have committed suicide in the state due to panic over the implementation of the National Register of Citizens.

Congress leader Gaurav Gogoi said the bill is in violation of many articles of the Constitution and the basic spirit of the Preamble which talks of equality, liberty and fraternity. Claiming that the BJP is “digging a political graveyard” for its NDA allies from northeastern states, Gogoi appealed to those parties to vote with their conscience and not vote according to political compulsions in parliament.

“I am saying, there are political compulsions of these regional parties and it is a test in time that their vote on this bill will go down in history and people will remember them for that. They don’t understand that BJP is digging a political graveyard for these parties,” he said.

Debate over whether Bill should be tabled

Earlier on Monday, the Lok Sabha voted to introduce the Bill, tabled by Shah. Opposition parties led by the Congress had opposed the introduction, saying that the Bill violated Article 14 of the constitution.

A total of 293 members voted in favour of introducing the Bill, while 82 voted against.

Congress leader Adhir Ranjan Chowdhury began the debate, interrupting Shah to say that the Bill could not be introduced. Reading the preamble of the constitution, Chowdhury asked Shah, “Do you not like this document?”

Shah, responding to Chowdhury’s statement that the Bill openly targeted minorities, said that it did not do so “even 0.001%”.

N.K. Premachandran of the Revolutionary Socialist Party also opposed the Bill, saying religion could not be made the basis for citizenship. Article 25 and 16 of the constitution, on the right to practice religion, is applicable to everyone, including non-citizens, he continued.

Saugata Roy of the Trinamool Congress also opposed introduction of the Bill, saying that that Shah’s defence that “Muslims were not mentioned” in the Bill holds no water. “Amit Shah is new to the house, perhaps he does not understand the rules,” Roy said to protests from the BJP. The Bill is divisive, he said, and unconstitutional.

E.T. Mohammed Basheer if the Indian Union Muslim League, Gaurav Gogoi of the Congress, Shashi Tharoor of the Congress and Asaduddin Owaisi of the All India Majlis-e-Ittehadul Muslimee also spoke against the introduction of the Bill.

Owaisi hit out at the home minister, comparing him to Hitler. “I appeal to you (Speaker), save country from such a law and save home minister also,” Owaisi said. “Otherwise like in Nuremberg race laws and Israel’s citizenship act, home minister’s name will be featured with Hitler [German dictator] and David Ben-Gurion [former Israeli PM].”

Speaker Om Birla later said this comment would be purged from the record.

As the uproar grew, the speaker mentioned that he had received multiple notices against the Bill, citing that it violated Articles 5, 10, 14, 15, 25 and 26 of the constitution.

When Shah rose to speak, he was greeted by protestations from opposition leaders. He continued despite this, saying that he would assuage all fears about the Bill violating the constitution. Article 14 doesn’t stop the government from legislating based on reasonable classifications, he said.

“Indira Gandhi said in 1974 that people from Bangladesh would be granted citizenship,” Shah said. “Why didn’t she include Pakistan?”

Shah was interrupted multiple times by opposition leaders as he defended the Bill. During the debate, the speaker had to ask several MPs to sit down multiple times.

As the uproar continued, Shah suddenly said, “Those who are protesting do not consider Pakistan-occupied Kashmir to be an integral part of India.”

Minorities are suffering in the countries listed in the Bill, the home minister said, and India has the responsibility to take in those who are persecuted. Islam is the official religion in all three countries – this makes it a reasonable classification for the Bill, Shah argued. “Muslims will never be ill-treated in these countries,” he said.

It is Congress who divided India on religious lines, Shah alleged, referring to Partition.