Like Rajiv Gandhi in November 1984, Vajpayee will go down in history as a prime minister who preached the virtues of tolerance even as he turned a blind eye to the massacre of innocent citizens. 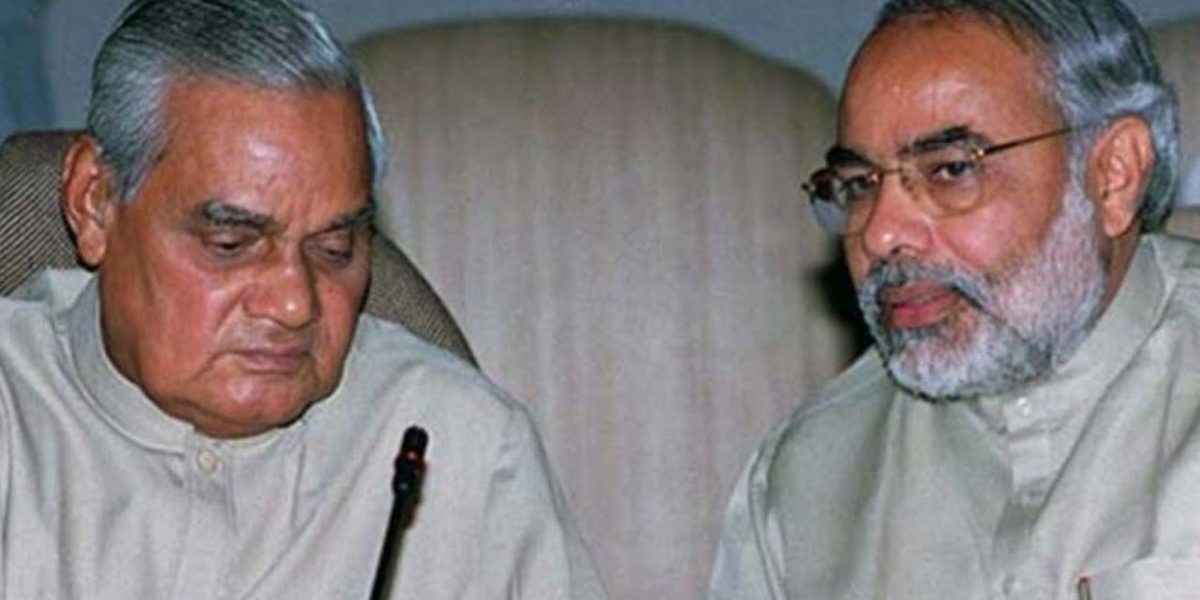 File photo from 2002 of Atal Bihari Vajpayee and Narendra Modi, chief minister of Gujarat at the time. Vajpayee criticised Modi for not abiding by 'rajdharma', or, the responsibility of a ruler. Credit: YouTube

Perhaps the most significant elaboration of the Golwalkar-Savarkar thesis of India as a Hindu nation beset by Muslim trouble-makers in recent times was that provided by Atal Bihari Vajpayee in his speech to the BJP national executive meeting in Goa on 12 April 2002.  The speech is remarkable for the manner in which a prime minister attempts to justify the murder of Muslim citizens in Gujarat by referring to Godhra and contrasting the supposed ‘traditional tolerance’ of Hindus with the alleged ‘intolerance’ of Muslims.

Like Golwalkar, who believed only Hindus were true Indians, Vajpayee uses ‘us’, ‘our’, ‘Hindus’ and ‘Indians’ interchangeably throughout his speech. He begins by making an observation about Hindu kingdoms in ancient Cambodia.

“No king destroyed a temple or damaged the deities’ idols at the time of attacking another king. This is our culture. This is our outlook, which treats all faiths equally.’ India, he said, was secular before Muslims and Christians set foot on her soil. Once they came, they had freedom of worship. ‘No one thought of converting them with force, because this is not practiced in our religion; and in our culture, there is no use for it.”

Here, Vajpayee was trying to contrast the ‘tolerance’ of Hindus and Hinduism, which he described as ‘our religion’, with the supposed intolerance of Muslims and Christians. The reference to the destruction of idols and conversion ‘with force’ is a standard part of the RSS arsenal. At the root of major incidents of violence, he said, was ‘growing intolerance’. Since Hindus are, by definition, tolerant, the obvious inference is that this ‘growing intolerance’ is on the part of the Muslims. Turning immediately to the burning issue of the day, he asked:

“What happened in Gujarat? If a conspiracy had not been hatched to burn alive the innocent passengers of the Sabarmati Express, then the subsequent tragedy in Gujarat could have been averted. But this did not happen. People were torched alive. Who were those culprits? The government is investigating into this. Intelligence agencies are collecting all the information. But we should not forget how the tragedy of Gujarat started. The subsequent developments were no doubt condemnable, but who lit the fire? How did the fire spread?”

Here, in as unsophisticated a fashion as Narendra Modi had stated it earlier, we find Vajpayee presenting his own version of Newton’s Third Law. There is no remorse about the killing of hundreds of innocent people, no apologies for the failure of the government to protect its citizens. He makes no attempt to distinguish between the criminal perpetrators of the Godhra attack and the innocent victims of the ‘subsequent tragedy in Gujarat’. For him, Muslims are an amorphous, undifferentiated lot who collectively ‘lit the fire’. They were to blame, not his party men who took part in the ‘subsequent developments’.

Going from the specific to the general, Vajpayee then launched a frontal attack on Muslims. He asserts that ‘For us, the soil of India from Goa to Guwahati is the same, all the people living on this land are the same. We do not believe in religious extremism. Today, the threat to our nation comes from terrorism’.

Who is this we and where exactly does this ‘threat to our nation’ come from? The Hindi text provides a clue. Vajpayee deliberately uses the Urdu word mazhabi for ‘religious’ (rather than the Hindi word dharmik) when he says ‘religious extremism’. We do not believe in religious extremism; it is the Muslims. His exact words were ‘Hum mazhabi kattarta mein vishwas nahin karte’. The fact that mazhabi is the only Urdu word used in the sentence is not accidental. In Sangh parivar literature and propaganda, whenever a positive reference to religion is made, the word used tends to be dharm, implying Hinduism; when the reference is negative, the word used tends to be mazhab. And terrorism, of course, is synonymous with Islam, or ‘militant Islam’, as Vajpayee chose to put it. But having first made a distinction between militant Islam and tolerant Islam, he then makes a sweeping generalisation about all Muslims:

The statement is classic hate speech, but after it generated a huge controversy, Vajpayee claimed his remarks were aimed not at all Muslims but only ‘militant Muslims’.

The Prime Minister’s Office subsequently issued a doctored version of the speech in which the word ‘such’ was inserted between ‘Wherever’ and ‘Muslims live’. Many newspapers subsequently printed this version. It was not until a privilege motion was raised in Parliament — for Vajpayee had made the mistake of claiming on the floor of the House on May 1, 2002 that the doctored version of the speech was the true version — that he was forced to admit the word ‘such’ had been deliberately interpolated.  However, he reiterated that ‘no one who reads my entire speech and takes note of the tribute I have paid to the tolerant and compassionate teachings of Islam, can be in any doubt that my reference . . . is only to the followers of militant Islam’.

The allegation of Muslims not living in co-existence with others and not mingling with others is such a standard trope in RSS propaganda that Vajpayee’s claim of intending to refer only to militant Muslims does not seem very convincing. Earlier in his speech, he had equated militant Islam with terrorism. ‘Not mingling with others’ is a peculiar charge to level against terrorists. In any case, it was a bit odd for the prime minister to talk about terrorism and militancy as if they were the preserve of the adherents of Islam— especially at a time when his own Sangh parivar was heavily involved in acts of terror in Gujarat. But there was a deeper level of dishonesty in the charge against Muslims, for it is precisely the policy of the RSS to ghettoise and isolate the Muslim community. As sociologist Dhirubhai Sheth has argued, it was not accidental that the Muslims who bore the brunt of the Sangh parivar’s violence in Gujarat were those who chose to live in Hindu-majority areas. The communal killings in the state, he says, have exposed the dishonesty of the ‘Hindutvavadis’ who reproach Muslims for not entering the ‘national mainstream’ but then beat them back into their ghettos whenever they do emerge.

In another attempt to soften the impact of his Goa remarks, Vajpayee told parliament that he was as opposed to militant Hinduism as he was to militant Islam. ‘I accept the Hindutva of Swami Vivekananda but the type of Hindutva being propagated now is wrong and one should be wary of it.’ Having said this, however, he went back to square one by adding that although there were laws to deal with such an eventuality, he was confident no Hindu organisation would become a danger to the country’s unity.  In other words, only Muslim (or Christian or Sikh) organisations have the potential of endangering the country’s unity. After maligning Vivekananda — who never spoke of Hindutva but of Hinduism — Vajpayee went straight back to the teachings of Golwalkar and Savarkar.

Apart from reverting to the usual chauvinist line of the Sangh parivar, Vajpayee was also diverting the debate into a dead end. The issue is not whether he personally opposes militant Islam or Hinduism but whether, as prime minister, he is prepared to defend the constitutional rights of all Indians. Regardless of his own views and beliefs, a prime minister cannot speak for only a section of citizens. Do the Muslims of Gujarat have the right to physical security? Is he prepared to punish those who have committed crimes regardless of their political or ideological affiliation? Rather than dealing with these questions, Vajpayee is trying to cover up his own political failure and culpability. 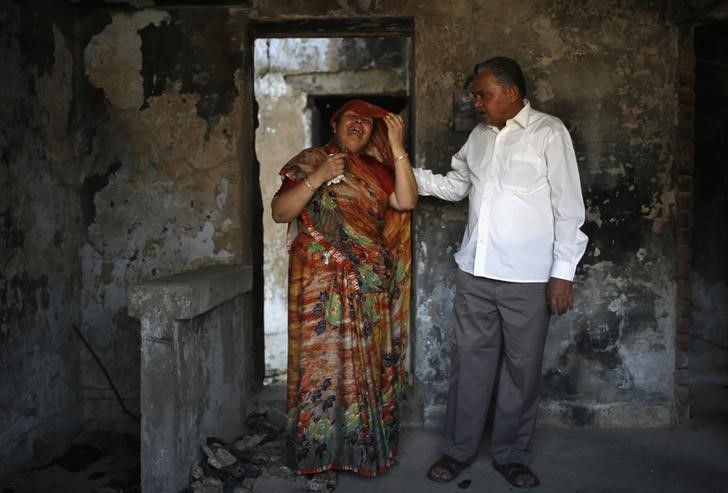 It is remarkable that Vajpayee’s first televised address to the country was only on March 2, 2002 — after the seventy-two hours of apparent freedom enjoyed by the Sangh parivar in Gujarat expired — and even then, all he could do was appeal for calm and tolerance.  In fact, his attempt to blame the ordinary people of Gujarat — and their supposed lack of ‘harmony ’— for the mass killings in their state was a disingenuous manoeuvre aimed at absolving himself, his party colleagues and the state machinery they control, of any responsibility for the crimes. Like Rajiv Gandhi in November 1984 and Narasimha Rao in January 1993, Vajpayee will go down in history as a prime minister who preached the virtues of tolerance even as he turned a blind eye to the massacre of innocent citizens. Instead of using national television to tell the people of Gujarat that the genocidal mobs would be put down with a firm hand — and that policemen failing to protect the life and liberty of all would be punished — Vajpayee delivered a sermon on the need for religious sadbhavna.

There was little passion or feeling in what he said, no words of succour for the victims, no anger or opprobrium for the killers. He said the violence was a ‘black mark on the nation’s forehead’ but he couldn’t bring himself to say that retaliatory attacks on Muslims for what happened at Godhra would attract the same punishment as the burning of the train. Here was a violent disturbance that had made a mockery of state power as it is supposed to operate, yet the prime minister issued no dire warnings to those who were challenging his authority and power as chief executive. In the US, President George W. Bush and his senior aides publicly warned citizens against attacking Muslims, Arabs and other immigrants following the World Trade Centre terrorist strike. In less than a year since 9/11, a man in Texas was sentenced to death for the ‘retaliatory’ murder of a Sikh immigrant. To date, however, Vajpayee has yet to even publicly acknowledge that Muslim citizens of India were victimised in Gujarat or to threaten the attackers with the severest consequences.

Indeed, Vajpayee was later to demonstrate that he was so loyal to his party and parivar that he didn’t mind undermining the majesty of the state and his own office. On April 17, 2002, he said that if only parliament had condemned Godhra, the subsequent massacres would not have happened. The fact is that he is leader of the House and could have ordered a discussion and condemnation of Godhra on the day it happened — instead of the scheduled presentation of the budget.

In early May, he made another curious statement, this time on the floor of the Rajya Sabha: That he had decided to remove Modi in April but didn’t act fearing a backlash in Gujarat. ‘I had gone to Goa making up my mind on changing the ruler in Gujarat but according to my own assessment, I felt that the change in leadership will only worsen the situation.’  At the time, the only people opposed to a change in leadership were the RSS and VHP. Removing Modi may or may not have provided temporary relief for Gujarat’s beleaguered Muslims but it was odd for the prime minister to admit being held hostage to the threats of criminals and goons. “Vajpayee,” wrote B.G. Verghese, “placed the diktat of the mob above his oath of office . . . the emperor has no clothes, stripped of the last shred of moral authority.”

Excerpted from the the author’s Introduction to the book, Gujarat: The Making of a Tragedy (Penguin, 2002). Edited by Siddharth Varadarajan