In Ladakh, a New Generation of Politicians Breaks From the Old

A new elected council to govern Leh will be announced on October 26. But candidates already reflect a new wave, at odds with the tightly-bound community they represent. 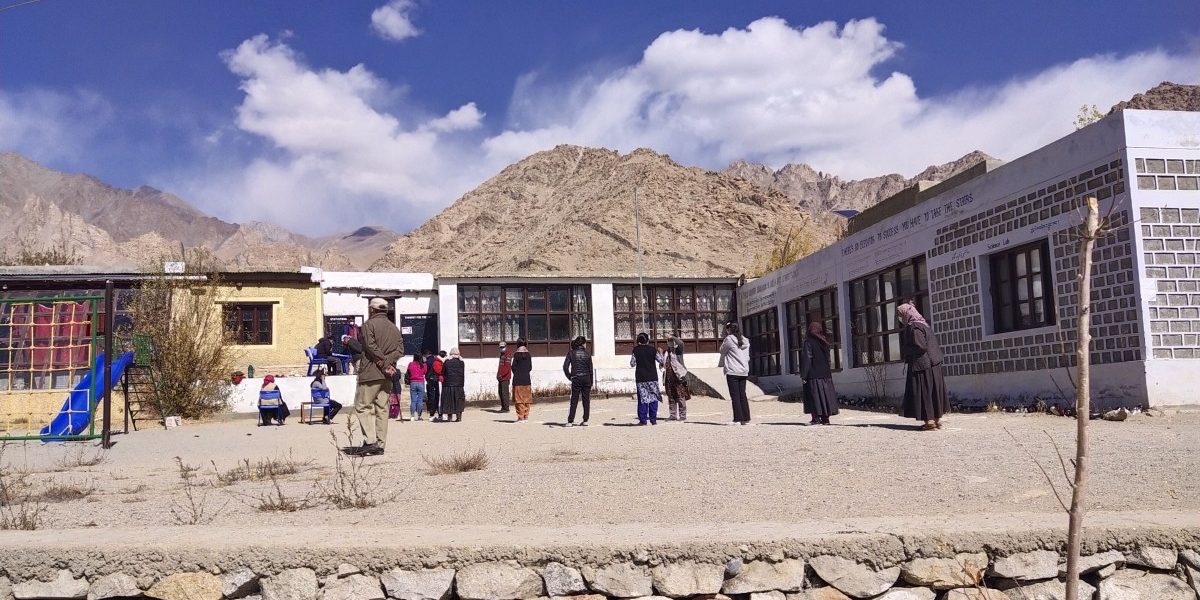 Leh: In an unprecedented move, the BJP recently sent top officers to the cold desert of Ladakh to campaign for the election of a council that is often overshadowed by the powers of a District Commissioner. Ministers Kishan Reddy, Kiren Rijiju and Mukhtar Abbas Naqvi, BJP national general secretary Arun Singh, and J&K BJP general secretary Ashok Kaul, all travelled to Ladakh ahead of election of the 6th Ladakh Autonomous Hill Development Council (LAHDC), Leh on October 22. The result will be declared on October 26.

The council is the highest elected body in Leh, with 26 directly elected and four nominated members. The majority party forms the executive branch of the council, the head of which is called Chief Executive Councillor (CEC). In order of precedence, the office of the CEC is equal to a cabinet minister in a state government. The executive power extends over subjects like health, agriculture, tourism, and education – functions that overlap with those of the DC, usually an IAS officer in their early years of service.

Never has an LAHDC election meant visits by mainland politicians at this scale. Maybe the idea was to remind Ladakhis that the council must be under the BJP if funds from the Modi government are to keep flowing. The visiting politicians, using a paternalistic tone, left no stone unturned to convey that point to the local media.

In the election, the BJP locked horns with the Congress – which has deep roots in Leh. But no Congress party leaders from outside the region were at hand. The Congress campaign was led by Nawang Rigzin Jora, a former cabinet minister in the J&K state. To be sure, the BJP campaign was led by local leaders too, the mainlanders only made short visits. The Aam Aadmi Party also made its debut in a few seats.

All parties fought on the promise to bring the Sixth Schedule of the constitution. However, home minister Amit Shah, speaking to an all-party and all religious body delegation led by Thupstan Chewang, had already given his assurance to do so.

The 6th LAHDC election is also distinctive because of a new generation of politicians in the fray. They have grown up in pronouncedly changed political environments. An elder generation came up through the movements demanding the separation of Ladakh from J&K, as a UT with legislature, from the 1980s onwards. These political elites of Leh, including prominent names such as  Thupstan Chhewang and Tsering Samphel, were on the streets, facing the lathi charge of the J&K police, or hiding in the mountains, or doing time in jail as political prisoners in the Valley. Since the Bakula Rinpoche, their generation has continuously (re)negotiated Ladakhi relations with the Indian nation-state.

Their first major achievement, in the 1980s, was getting Ladakhis recognised as Scheduled Tribes. The distanced relatives of the Ladakhis, the people of Lahaul and Spiti in Himachal Pradesh, had been recognised as STs since the promulgation of the constitution. A second achievement was the institution of the LAHDCs, one each for Leh and Kargil. The first council of Leh, constituted in 1995, marked the first semblance of local decision-making powers since 1834 when the Dogra general Zorawar Singh annexed the kingdom of Ladakh.

The demand for Union Territory status had two consequences: One, it concretised a particular identity of the Ladakhi, in the image of a Buddhist man or woman from in and around Leh town. Buddhist Ladakhis from “remote” areas like Changthang and Zangskar were  marginalised, and a rift opened with Muslim Ladakhis. From the 1960s, Martijn van Beek argued, the discontent with the J&K state began to be dressed in a new language: of Muslims in Kashmir discriminating against vulnerable Buddhists.

The movement then began to view Ladakhi Muslims as colluding with Kashmiris. The blot on the record of Leh’s elder politicians is how their movement sowed the seeds of a communal divide: framing politics in terms of religion, and not, say, in terms of language, which could have provided common cause to both communities. Still, prominent politicians do maintain a secular image – similar to how Manmohan Singh maintained the image of a clean prime minister, heading a more culpable council of ministers.

The elder leaders also lacked a firm allegiance to any national parties. When the agitation for UT status saw a lull, they often contested elections against each other. Thupstan Chhewang, for instance, the BJP MP from Ladakh in 2014, fought elections on Congress tickets and also as an independent. Party loyalty seemed to be based on practical considerations.

The new generation, which contested this October 22, is different. First, they seek election to a council that is an established institution. Only two or three of them have felt the baton of the J&K police.

Secondly, many are beneficiaries of ST status, and have studied in the country’s best educational institutes. One Congress candidate is a Stephanian, another a product of Delhi’s School of Planning and Architecture. A BJP candidate has a doctorate in Buddhist Philosophy from Delhi University. Not only these young politicians, there are many Ladakhis of their generation, including me, who make up the privileged cohort that had access to modern avenues of upward mobility. This elite group is also spawning a deep class division in Ladakh. Moreover, education made us a part of the market-driven capitalist economy.

The recent years of vendetta governance in mainland India – of threats, transfers, raids and FIRs – is now being replicated in Leh. Local BJP politicians have allegedly transferred faculty from Leh College to remote areas because of their opinions. Leh district has a small population of only 1.33 lakh. Social and political life is still organised through ties of kinship and other traditional mechanisms; the people are bound as a community, known to each other by genealogy, household names, village and sub-region. The use of state machinery to silence opinion is unheard of.

Finally, Ladakh’s younger BJP politicians are said to have no control of the regional BJP unit. The rising influence of Ashok Kaul, J&K BJP general secretary, is seen as one reason. Thupstan Chhewang and Chering Dorjay Lakrook, both one-time members of BJP, have flagged the control of Ladakh affairs by the Jammu-based leader. This is not to say that Congress is entirely in the hands of the locals.

Tribal politicians can and will align with large parties in power in the state and at the Centre. In 2015, in Assam’s Dima Hasao Autonomous Council, a sixth schedule area, councillors who won on Congress tickets all mass-defected to the BJP – which formed the regional authority without having won any seats. The reason was simple: to align the council with the party in power in Guwahati and New Delhi, to get autonomy to work.

It is another thing for tribal politicians to espouse the cause of Hindutva. Many want to believe that Ladakhi BJP politicians do not champion the cause from their heart. If they do, it is an ugly image. Imagine a Ladakhi BJP member: belonging to a religious minority (Buddhist, Muslim), a linguistic minority (Ladakhi language), and a racial minority (mongoloid), who also carries a Scheduled Tribe certificate. Imagine them speaking the language of majoritarian rule.

Padma Rigzin is a PhD scholar in the Department of Humanities and Social Sciences, Indian Institute of Technology Delhi.