How the BJP Won the Ladakh Council Polls Despite All Odds

The opposition was in disarray, and the Central government pulled out all the stops to assuage dissenting voices in Ladakh. 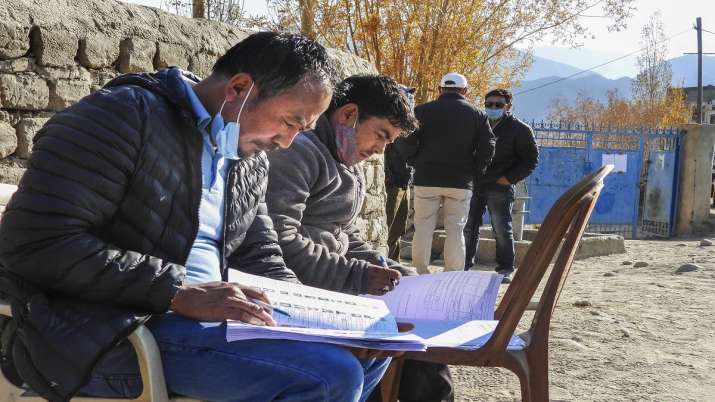 Srinagar: When elections were announced to the Ladakh Autonomous Hill Development Council (LAHDC) Leh, all odds were against the Bharatiya Janata Party. The party was ruling the local governing body of the mountainous region, bordering China.

The party’s “betrayal” on granting protection on jobs and land for locals, under the Sixth Schedule of the Constitution, brought the opposition and people on yo a single platform to fight for the “larger cause”. The disempowerment of people in matters relating to governance and day-to-day administrative affairs since Ladakh was made a separate Union territory in August last year was another reason for brewing anger against the party.

Many observers had written off the party that ruled the Council since 2015. But when the election results were announced on October 26, the BJP retained its hold on the Council, though its seat share in the 30-member body shrunk from 18 to 15.

The Congress, which was expected to give a tough fight to the BJP this time, could not reach even a double-digits figure, winning just nine seats (up from five in the previous elections). Two of 23 contesting independent candidates won the remaining seats, while the four councilors in the body are nominated by the ruling party.

What were the factors that contributed to the BJP’s win, and saved it from a major embarrassment?

While the election was a direct contest between the BJP and the Congress, which had fielded candidates on all 26 seats, the Arvind Kejriwal-led Aam Aadmi Party (AAP) had also joined the fray.

For the first time, however, the BJP flew in a battery of Central ministers and senior party leaders, including Mukthar Abbas Naqvi, Kiren Rijiju, Anurag Thakur and G. Krishna Reddy, to campaign in the local polls in the Buddhist-dominated district. The district has a total of 89,789 voters.

“Never ever have Central ministers campaigned in local council election in Ladakh. This showed a lack of confidence by the BJP in local leadership,” said senior Congress leader Nawang Rigzin Jora.

The ministers, Jora said, visited Ladakh twice, and according to him, on their second visit, they camped in the district for a week. “They had all facilities at their disposal,” he said.

Also read: In Ladakh, a New Generation of Politicians Breaks From the Old

For the Congress, Jora, a former minister in the erstwhile state of Jammu and Kashmir, was the lone “star campaigner” to challenge the BJP’s strategy. Not a single top Congress leader from Delhi flew to Ladakh to boost the morale of their local leaders.

That could explain why the BJP swept the polls in strategically important Nubra Valley, which is located close to the China border, winning all five council seats.

“The BJP’s strategic manoeuvrability is matchless at this point of time. For them, Ladakh was a tiny contest. Whether right or wrong they have cent percent clarity on their policy, ideology and strategy,” said senior political analyst Zaffar Choudhary.

On the other hand, Choudhary said, the Congress lacks clarity on the political situation in Ladakh post August 5, 2019. He said there was a split among party leaders between Kargil and Leh over the Union territory status for Ladakh, with Kargil demanding a reversal of the decisions taken on August 5 last year, when the government of India read down J&K’s special status and split the state into two federal territories.

“This lack of consensus is evident even within Leh in the party. There is also lack of leadership. All these factors left the field open for the BJP once they were able to manage the recent crisis over the demand for Sixth Schedule for Ladakh,” he said.

Those acquainted with Ladakh politics said the Congress failed to build on the momentum in the district against the BJP over the demand for protection to land and jobs for locals.

In run up to the polls, political and religious bodies in Leh had joined hands to form the People’s Movement for Sixth Schedule for Ladakh. The region saw several days of protests and shutdown, led by the body, to demand the extension of the Sixth Schedule to Ladakh.

As the BJP-led government at the Centre saw the coming together of the groups as a major challenge, Union home minister Amit Shah met top members of the group in Delhi and persuaded them to call off the election boycott, assuring them that the government would “consider [their demands] positively”.

By that time, the body had become a strong and unifying voice in Ladakh. “The softening of the stand by the body changed the tide in favour of BJP,” said a local journalist from Leh.

“The Congress was never in the race. A good number of the seats the party won were through vote against the BJP for its anti-people policies, and not the votes in favour of the Congress which was in complete disarray,” said the journalist, wishing not to be named.

Jora said the grant of Union territory status to Ladakh helped the BJP in the Council elections. “It was the long pending demand of the people,” said Jora, responding to a question on why his party could not perform better.

The decision of the regional parties, National Conference and People’s Democratic Party, to not contest the elections also left the field open for the BJP. While the entire Leh unit of the National Conference joined the BJP in August this year, the PDP unit had switched over the sides in April 2019.

Kargil-based political activist Sajad Hussain said the AAP’s decision to contest the polls ended up eating into the votes of the Congress. “At several places the Congress lost by double-digit votes which were polled by the AAP party,” said Hussain.

Jora said they lost two seats to the BJP by a small margin of nine and six votes, and the party faced defeat on three other seats, Lamayuru, Thiksey and Rong, “as AAP ate into our vote share”.

While the AAP had fielded candidates on 19 seats, it ended up drawing a blank, though on some seats the party polled good number of votes. “They (AAP) damaged our prospects and ended up helping the BJP,” said Jora.