Any observer not familiar with the peculiarities of the state would drop their jaw at how effortlessly Sajad, whose proximity with the BJP is not hidden, has swung to the other extreme. 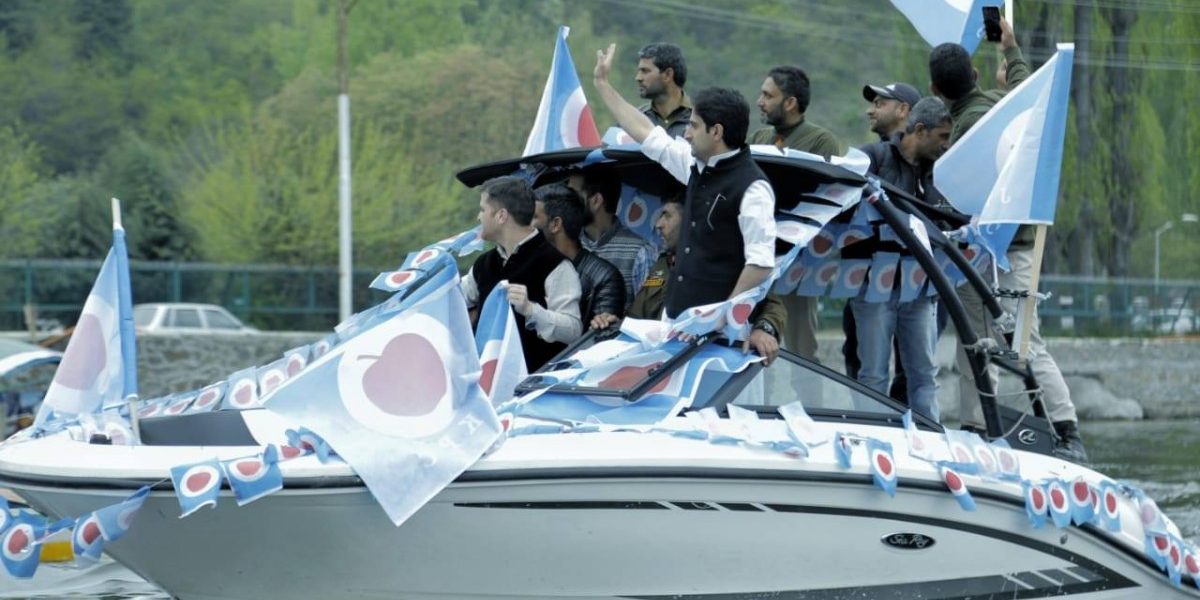 Srinagar: The most striking thing that sets the 2019 elections apart from those held in 2014 is the marked absence of the People Democratic Party’s green flags imprinted with a pen and ink pot. Five years ago, around the Tourist Reception Centre in the centre of Srinagar, these flags hung from all the street lights. They festooned the famous fountain near the area and littered the road. Not anymore.

Those flags have been replaced with new ones – blue in colour, with a red apple drawn at the centre. They are People’s Conference flags. This change is not just symbolic but the reflection of a radical political realignment on the ground exemplified by the rise of Sajad Lone. But will he be able to make an enduring impression on the state’s politics?

The Kashmir Valley has three parliamentary constituencies. To set the right tempo, the Election Commission had perhaps deliberately scheduled the first phase of polls for north Kashmir, which is currently less insurgency prone. The Baramulla constituency includes districts like Uri, which have a significant number of people who take part in elections.

Anticipating a good turnout, the government hoped to put its best foot forward in the north. It then expected to capitalise on the momentum of a good beginning in the Srinagar constituency, before finally dealing with strife-ridden south Kashmir. Polls for the Anantnag seat have, incredibly, been split into three phases so that a heavy contingent of security forces are available to guard the booths.

But things did not go as planned. On April 11, when voting ended in the north, protests erupted that targeted the rear-guard of the departing security detail. The police responded by pelleting the crowd, resulting in the death of an 11-year-old boy. The turnout in the northern constituency of Baramulla was a dismal 34.61%.

The 14% turnout in Srinagar last week has disappointed further. When the chief electoral officer was addressing the media and sounded “very satisfied” that the  poll process had ended peacefully, scores of young protesters were licking their wounds in the ophthalmology ward of Shri Maharaja Hari Singh Hospital in Srinagar.

Now all eyes are on South Kashmir, where the true moral legitimacy of the elections will be tested. Significantly, the by-election which was due there in 2017 could not take place in the wake of violence.

The real challenge: Assembly elections and after

But the troubles are not going to end here. Kashmir is also scheduled for assembly elections a few months from now. The stakes are very high because the next dispensation is going to inherit a blazing security situation that consumed its predecessor. In June last year, the BJP, which had inked a power-sharing pact with the PDP in 2014, withdrew its support amidst a worsening security situation, causing the government to collapse.

The assembly was kept in suspended animation till November when the governor finally dissolved it. The dissolution came on the heels of reports that the BJP (with 25 assembly seats) was trying to cobble a government banking on Sajad Lone’s People’s Conference (which had two seats) and combining them with dissenting PDP MLAs to reach the majority 44 mark in the 87-seat assembly. Such an arrangement was supposed to have envisioned Sajad Lone emerging as chief minister. That did not happen.

By the time parliamentary polls were announced in Kashmir earlier this year, a new political readjustment was already taking shape. Key desertions to the NC and mainly PC have enfeebled the PDP. During the last assembly elections in the state in 2014, the PDP won the largest number of seats (28).

The party’s traditional bastion is South Kashmir, comprising the districts of Anantnag, Kulgam, Pulwama and Shopian. These districts spiralled into violence after Burhan Wani’s killing.

Anantnag town is also a stronghold of the Jamaat-e-Islami, an organisation whose cadres are said to have thrown their lot behind the PDP in 2014. JeI was banned by the Union home ministry in February.

The end of its partnership with the BJP caused the PDP’s political stock to plummet. The party also suffered a wave of desertions involving influential legislators. The first one to abandon the party was Shia leader Abid Ansari last December.

Earlier this year, the party lost another influential face, Altaf Bukhari, who was expelled for “anti-party activities”. To make matters worse, the party will now have to live with the stain of having paved the way for the BJP to carve its footprints in Kashmir’s political arena. “With PDP going down, it is the NC that finds itself the biggest beneficiary of this change,” said Aijaz Ashraf Wani, political science professor at Kashmir University who recently published a book on the history of governance in the state since 1948.

While there is not much of a campaign trail in the Kashmir Valley from which to read the pulse of the latest elections, it is apparent that there is only one rallying point: Article 35 A. Every election rally is suffused with speeches in defence of J&K’s autonomy laws. It seems every other issue has taken a backseat.

In a good augury for the election season, recruitment into militancy has slumped. So have the number of militant-related incidents. PC has managed to rack up some political capital, but the PDP is not the main party it confronts: That is the National Conference, which had walked into the political wilderness after the 2010 uprising.

Omar Abdullah is deftly leading the party’s election campaign, reaping the benefit of resentment against the PDP. But over the last few weeks, the NC has also redirected its fury against Sajad Lone. If one pays close attention to their public correspondence, it’s clear that Sajad views the NC as a potential rival and fully comprehends the depleting electoral prospects of PDP while also recognising that the role the Congress will ultimately play is going to be auxiliary.

The INC has entered into a seat sharing arrangement with National Conference in Jammu and will not field candidates in Kashmir. The PDP too did not field any candidate in Jammu so as not to divide “secular votes” there. Does it mean that the PDP and NC are open to enter into an alliance with Congress to keep the BJP off? “It all depends on the numbers,” said Wani. “It is entirely possible that they may come together.”

The Wire spoke with Muhammad Ali Sagar, NC’s general secretary about a possible future alliance with the PDP. “If the offer comes from Mehbooba Mufti, we will give our response,” he said.

Political analysts in the valley believe that even if the majority of voters end up boycotting the parliamentary polls, the same won’t happen in the assembly elections. “If we analyse elections in the state starting from 2002, there are pockets that always boycott. But at same time, we need to realise the current polls are for the Central government and people don’t have expectations from them,” Wani said.

“When elections concern your local MLA, roads and transformers, a different picture plays out. Besides, there is an abiding fear that the absence of a proper government is giving a BJP backed governor far too much freedom to tinker with sensitive issues,” he added.

Meanwhile, People’s Conference from the very beginning has attempted to project itself as an alternative to both PDP and NC but in its campaigns, the party has singularly attacked the latter, avoided griping about PDP for the most part.  Last month PC’s vice president began campaigning on this very note. “There is a need to elect credible representatives in the coming parliament and assembly elections and workers’ from other parties joining PC is a clear indication that PC is the only viable alternative to take the state towards peace and prosperity” he said, referring to the exodus of legislators from other parties into its fold.

Later he termed Omar a poster boy of the NDA who took birth at RSS headquarters in Nagpur. Sajad upped the ante further by calling for a judicial commission into the 1987 election rigging for which it held NC responsible.

Since then, the NC has denounced Sajad as BJP’s “proxy” and termed every vote to PC as a  “vote to Modi”, warning that Lone’s party will undermine the state’s political autonomy. Sajad snapped back by accusing Omar of having agreed to become a rotational CM in alliance with the BJP in 2014. When the press nudged Omar on this, he neither confirmed nor denied the charge. “No comments,” he said.

Also read: What Voters of Jammu and Kashmir Want

Any observer not familiar with the peculiarities of the state would drop their jaw at how effortlessly Sajad, whose proximity with the BJP is not hidden, has swung to the other extreme, arrogating the vocabulary of the same NC and PDP he seeks to displace. He has not only fiercely defended Article 35-A but also appealed for reversal of all erosions to the state’s autonomy that have happened since 1951.

He condemned the bans on the JKLF and Jamaat-e-Islami, denounced the detention of Mirwaiz Umer Farooq by the NIA, accused Farooq Abdullah of not preventing the hanging of Maqbool Bhat and took a swipe at Omar for allying with the NDA in 1999. His influential colleague Imran Reza Ansari has vowed “to sacrifice every drop of blood to safeguard Article 370 and 35A.”

Sajad has clearly emerged as a significant contender for the chief minister’s post as and when assembly elections take place but for that to happen, the PC will have to eat into the the votes of a reinvigorated National Conference. “The entry of Imran Reza Ansari is one such move because having such a presence of influential Shia members is likely to fragment votes in Shia dominated constituencies in Srinagar like Zadibal,” said Irfan Mehraj, regional journalist and editor.

Yet some political observers believe Sajad’s political future is far from assured.

“PC’s substantial dependence on BJP financial support makes me conclude that its prospects are limited. On the other hand, the National Conference’s cadre-based organisation and its traditional support base will translate into better results,” said Siddiq Wahid, senior fellow at the Centre for Policy Research (CPR), New Delhi. “But these ‘predictions’ are assuming the elections are fair and the jockeying for government formation afterwards is transparent. As the PDP’s emergence due to Delhi’s support within three years of its birth goes to show, anything can happen in Kashmir’s electoral politics.”

Shakir Mir is a journalist from downtown Srinagar.