The speaker told Kumaraswamy that the SIT should not lead to a witch-hunt and should be only to establish the truth. 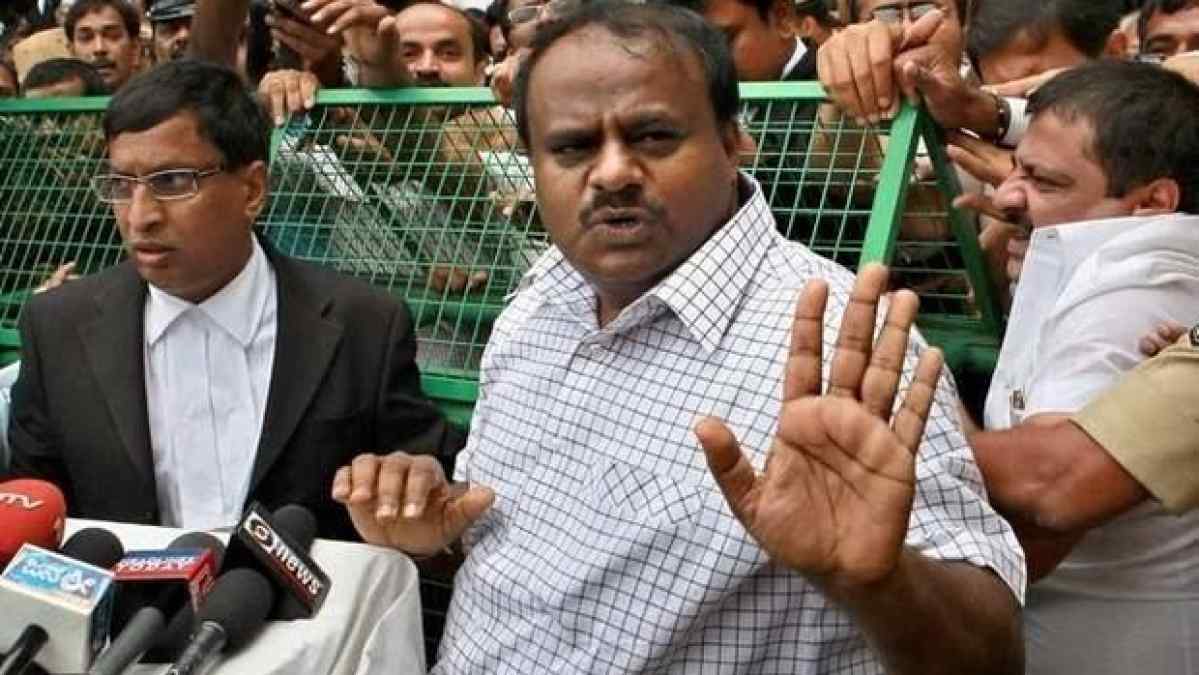 As the audio row rocked the assembly, Kumaraswamy accepted an “advice” by an emotional speaker Ramesh Kumar to constitute a Special Investigation Team to probe the episode.

This was to “establish the truth” as his (Kumar’s) name had also been dragged with the charge that he had been “booked” for Rs 50 crore, the speaker said.

“Constitute an SIT to establish the truth. Give me relief in 15 days,” a visibly anguished Kumar told Kumaraswamy, after members empathised with the speaker, saying he was known for his integrity and dignity of his office should be protected.

Kumaraswamy said he was also “pained” at the charge against Kumar and accepted his suggestion to form an SIT.

“I seek your permission to form the SIT for a comprehensive probe to bring out the truth,” he told the chair.

BJP members insisted that the probe be limited to the charge against the speaker, as otherwise the government was likely to misuse the SIT for ‘political vengeance.’

The speaker told Kumaraswamy that “this (SIT) should not lead to a witch-hunt. The probe should be only to establish the truth.”

Kumar said in the conversation “one person induces another …says we have already booked the speaker for Rs 50 crore… about Rs 50 crore having paid to the speaker to accept the resignation of MLAs (of the ruling coalition).”

He also said the man offering allurements appeared to be one holding a statutory position.

The political war over charges of horse-trading had escalated in Karnataka Friday with Kumaraswamy releasing an audio clip in which Yeddyurappa is purportedly trying to lure a JD(S) MLA for destabilising the coalition government.

Kumaraswamy had said that during the purported conversation there was a mention of about a “Rs 50 crore offer to book” the speaker to give a ruling in favour of MLAs who might resign to help the BJP bring down his government.

The speaker said he had received the audio clip and a letter from the chief minister on Friday and he was not sure whose voice it contained.

He said during the purported conversation, it was stated that Rs 50 crore had been paid to the speaker to get a favourable ruling to accept the resignation of ruling coalition MLAs.

“Identification and authentication of the person is important. I can’t take this blemish. I can’t show my face to my wife and children,” Kumar said, as he spoke emotionally of how he had always upheld the highest standards in maintaining integrity in his political career.

“I don’t want to sit in the chair even for a minute.But I am not taking any hasty decision,” Kumar said.

As minister Krishna Byre Gowda said Yeddyurappa had accepted that it was his voice, the BJP leader, who had remained silent throughout the discussion, got up to remark angrily,” don’t say that I have admitted to the conversation.”

After Kumaraswamy said he had accepted the Speaker’s advice for the SIT probe, BJP members objected to the SIT inquiry and insisted on constituting a House committee or a judicial probe.

They expressed fears that the SIT might be misused with “political vengeance”, leading to trading of charges and counter-charges between the ruling benches and the opposition.

The speaker then adjourned the House for half an hour.

Renukacharya (BJP) flashed a CD and said they can also expose.

The 2014 video CD showed Kumaraswamy purportedly telling supporters of MLC seat aspirant Vijugowda Patil, the then JDS leader from Bijapur district, about the demand for Rs 40 crore from his party MLAs in return for votes, BJP sources said.

As the House resumed,the BJP members continued to protest against the SIT, saying since the chief minister was also a party, he could not order the probe.

The speaker said a judicial probe would be time consuming and he wanted relief within 15 days as he doesn’t want to “carry the blemish” and ruled out forming a House committee.

“I cannot reverse or modify my decision,” Kumar said firmly, seeking to put an end to the matter.

Senior BJP leader Eshwarappa said the party had expected a house committee would be formed or a judicial probe would be ordered.

As the house plunged into din with a war of words between the BJP and the ruling alliance members, the Speaker adjourned the proceedings for the day.

Kumaraswamy had claimed there were two audio clips of recorded telephonic conversation between Yeddyurappa and Sharan Gouda, son of JDS lawmaker Naganagouda, whom the BJP leader was allegedly trying to woo with money and other offers.

In the clip, a male voice is heard offering money and ministerial berth, besides assuring Sharan Gouda about “taking care” of the speaker and the judges in case of the anti- defection law being invoked.

Yeddyurappa had Sunday admitted having met Sharangouda and spoken to him.

“It is true that he (Sharan Gouda) had come and spoken to me…. What happened… all those things let’s see in the future, but the Chief Minister has stooped to the level of sending someone and getting the conversation recorded,” Yeddyurappa had said.

The audio war has given a new twist to the political turmoil triggered by alleged attempts by the BJP to destabilise the almost nine-month old coalition government.

Fearing poaching, both Congress and BJP had kept their party MLAs in resorts and hotels.