BJP supporters at the venue of the BJP rally that was cancelled on May 13, 2019. Credit: PTI/Swapan Mahapatra

New Delhi: In a rare decision, the Election Commission of India invoked Article 324 of the constitution on Wednesday and said that campaigning for the Lok Sabha polls in West Bengal will end on 10 pm on Thursday.

The order was given by Chief Election Commissioner Sunil Arora and ECs Sushil Chandra and Ashok Lavasa in view of “growing incidents of disruption and violence during the political campaigns and processions”.

On social media, many speculated that the EC had made the unprecedented move to curtail campaigning at 10 pm on Thursday – and not immediately or at 5 pm on that day, i.e. 24 hours before the normal ‘silence period’ – because Prime Minister Narendra Modi is due to speak at two rallies in the state on May 16.

With the EC under the scanner already for a series of bizarre decisions, others claimed that the order was given to aid the BJP after its supporters allegedly desecrated Ishwar Chandra Vidyasagar’s bust in Kolkata on Tuesday as it was hurting its chances of winning the North Kolkata seat – a seat the party had been expecting to scoop up.

According to one senior journalist who reached out to the EC for a comment on the 10 pm deadline, a top official reportedly said: “We didn’t want to be seen as abruptly disrupting campaign at its peak. Besides it gives all political parties an opportunity to demonstrate their commitment to peaceful campaigning”.

The deputy election commissioner in-charge of West Bengal undertook a visit to the state on May 13 and took stock of the preparation levels for the elections in the nine constituencies.

In his report to the EC, he said: “During the review with the observers it clearly came out that while logistics arrangements, including trainings of polling officials, etc are mostly on track as per ECI requirements, there is distinct resistance and non co-operation from the district administration and district police when it comes to providing a level playing field to all candidates for campaigning and in providing a fearless threat-free environment to the voters.”

The EC said the report also stated that “the observers pointed out that while on the surface everything looks fine, in their frank interactions with the public the fear psychosis that is widely prevailed comes out. They pointed out that the utterances of the AITC senior leaders on the lines of ‘Central forces will leave after the elections while we will remain’ sends a chilling message among the officers as well as voters alike.”

The poll panel said both the special observers – retired IAS officer Ajay Nayak and Special Police Observer and retired IPS officer Vivek Dubey – in their report on May 15 “informed about other incidents of violence during political campaigning where cases were registered based on violent incidents that occurred on 14.05.2019. During investigation of these cases about 100 persons were details. Out of these detainees, 58 persons were arrested in two cases.”

No specific mention of violence during Amit Shah’s road show 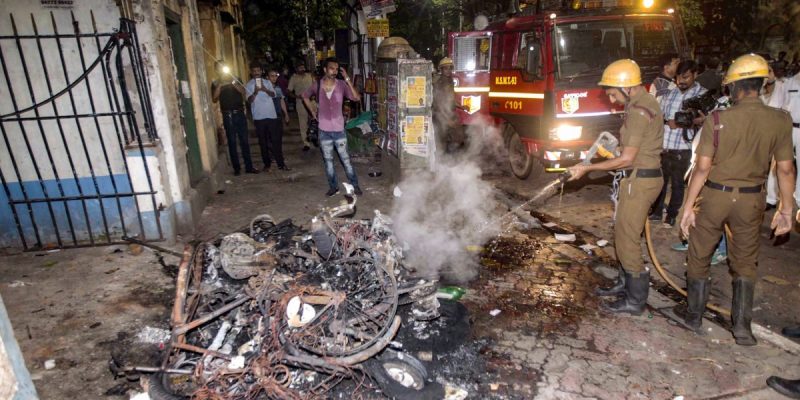 While not specifically referring to the violence during BJP president Amit Shah’s road show in Kolkata on May 14, the EC noted that during the past 24 hours, representatives of various political parties had met with it and “expressed their concerns on the prevailing law and order situation”.

“These campaign related violent incidents are creating an atmosphere of fear and hatred in the polling areas which is affecting the overall electoral environment,” it said.

“On the basis of these reports and inputs,” the Commission said it is “concerned about the safety and security of the general electors who have a right to access to the campaigns of the political parties/ candidates in free, fearless and conducive environment”.

The Commission also noted that it has “time and again with the deployment of adequate central armed police forces” intervened to create a “conducive environment for safe and secure campaign” in West Bengal.

EC says RP Act has no provision to deal with situation

Citing various Supreme Court rulings delineating its role and powers in the conduct of elections, the poll panel said it has “taken note of the provisions of Section 126 of the Representation of the People Act, 1951 which places restrictions inter alia, on holding, canvassing, attending, joining or adhering any public meeting or procession in connection with an election during the period of 48 hours ending with the hour fixed for the conclusion of the poll in the polling areas.”

Also citing Section 30(d) of the RP Act which specifies that “the date or dates on which a poll shall, in necessary, be taken, which or the first of which shall be a date not earlier than the fourteenth day after the last date for the withdrawal of candidatures”, the Commission said these two provision “make no provision for dealing with the type of situation now prevailing in these nine parliamentary constituencies in West Bengal”.

Stating that it was of the “considered opinion that some special measures are urgently need to arrest the prevailing situation” and to “create such law and order situation as may be conducive to holding free, fair and peaceful elections in these parliamentary constituencies,” the panel issued the order restricting the campaign while citing its powers under Article 324 of the constitution and “all other powers enabling in this behalf”.

It therefore directed that “no person shall (a) convene, hold attend, join or address any public meeting or procession in connection with an election; or (b) display to the public any election matter by means of cinematograph, television or other similar apparatus; or (c) propagate any election matter to the public by holding, or by arranging the holding of any musical concert or any theatrical performance or any other entertainment or amusement with a view to attracting the members of the public thereto, in connection with these elections.”

The Commission also state that “no spirituous, fermented or intoxicating liquors or other substances of a like nature shall be sold, given or distributed at a hotel, eating house, tavern, shop, or any other place, public or private, within polling areas in these nine parliamentary constituencies.”

A separate order issued by the EC through its Secretary, and communicated to the Chief Secretary of West Bengal, directed removal of the Home and Hill Affairs Principal Secretary Atri Bhattacharya for interference in the poll process. It said Bhattacharya, who is an IAS officer stands relieved for his current charge “for having interfered in the process of conducting the election by directing CEO, West Bengal through a letter dated May 13, 2019. The order stated that the Chief Secretary would look after the charge of Home Secretary also.

The same letter also stated that IPS officer, Rajeev Kumar, who was posted as Additional Director General, CID, “stands relieved and attached to Ministry of Home Affairs, New Delhi” and that he shall report to MHA by 10 a.m. on May 16.

The Commission has sought a compliance report in the matter by 10 pm today.