That rage which is so evident in the toppling, burning, desecration of so many statues all over the world never surfaced in Kolkata. 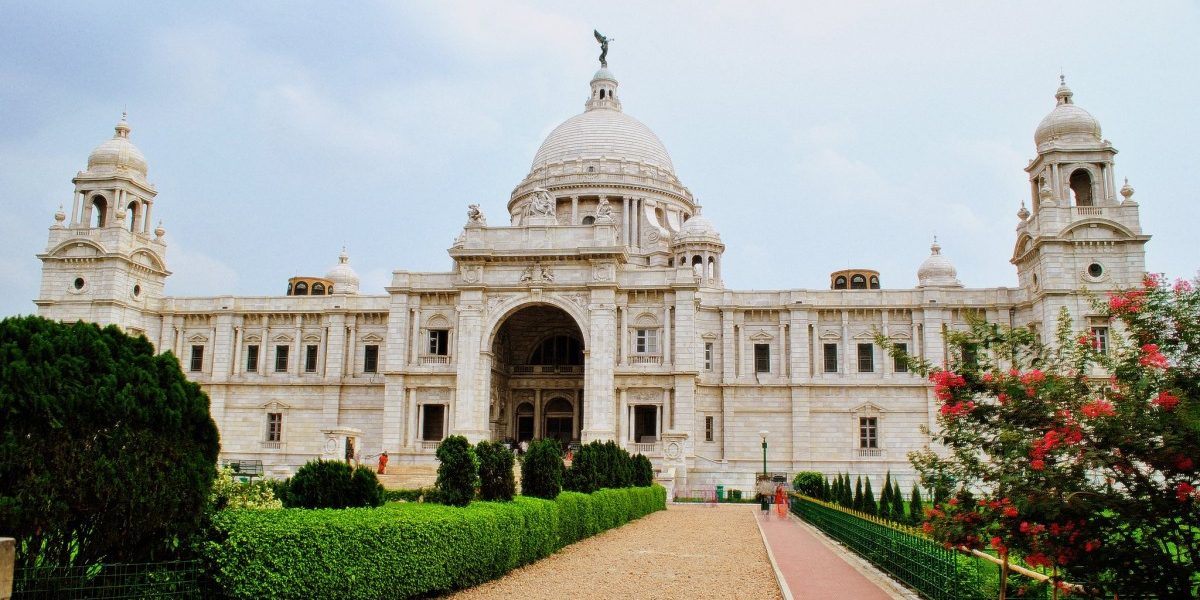 The “colonial content has been emptied” and the relics of the Raj survive in street names, as statuary inside the Victoria Memorial (pictured) or inside the inaccessible fastness of Flagstaff House, Barrackpore. Photo: Prantik.mukherjee/CC BY-SA 3.0

It is unlikely that most inhabitants of Kolkata remember much of the characters who shaped the history of the world and the idea of colonialism and later Empire. They do, however, remember that their city was once the lynchpin of the British Empire, its second city, from where it controlled the highly unequal trade and governance of its other colonies, including briefly Australia.

The paradox is confusing. Out of habit, and totally indifferent to history, most of Kolkata blithely refers to the untended park, full of litter, bang in the heart of the city, as Curzon Park, long after it was renamed Surrendranath Udyan and a statue of one of the first cohort of compromising nationalists, Surrendranath Banerjee, was installed. It is a peculiar choice, because Bengalis do not like Curzon. They may not think of him as racist, but they certainly associate his name with the first partition of Bengal in 1905 and the creation of communal constituencies; they associate him as the fellow who changed the history of Kolkata and Bengal by relocating the capital of India and stripping the city of its status.

Kolkata romanced the Raj; some of its inhabitants, like many others in what were once known as the “Presidency” cities, continue to do so. But it is not a passionate, blind love; there is and always was a resistance, resentment and rejection of the Raj, the East India Company and its subjugation of Bengal and by extension, India. Kolkata also romanced the national movement; but not everything about it. The city prides itself as the crucible of modernity in India; yet on two separate occasions, it has desecrated one of the greatest reformers, a Sanskrit scholar of extraordinary courage, Pandit Ishwar Chandra Vidyasagar.

Kolkata has vandalised its statues. Just never the colonial ones. It is extraordinary that for 20 years, after Independence, all the statues commemorating and venerating the heroes of the East India Company and Empire remained untouched. Not one was vandalised.

The rage, “the moment of friction when statues become soft targets,” as “the personification of the person,” as Tapati Guha Thakurta, eminent art historian, who lectured on ‘Why Statues Matter: The Changing Landscape of Calcutta’s Colonial and Post-Colonial Statuary in 2019’, said, are moments when the accumulation of “structural injustices and anomalies” explode and the statue becomes the embodiment.

That rage which is so evident in the toppling, burning, desecration of so many statues all over the world, including Edward Colston a slave trader in Bristol, Leopold II in Antwerp, Ghent and Brussels, Christopher Columbus in Boston and other parts of US, Confederate heroes and conquistador heroes, had stood on pedestals in public spaces for years, never surfaced in Kolkata.

Also read: ‘Home Is Where the Heart Is’: Remembering Kolkata’s Jewish Community

Guha Thakurta, who has studied the relationship of statues to the city and its people, said at the moment of friction, people treat them as humans. People ignored them, or ignored their discomfort with their presence, till it suddenly seemed unbearable after George Floyd died in police custody and Black Lives Matter erupted on to the streets, sweeping across the US and the rest of the world. As humans, the persons have to be trampled, insulted, desecrated and destroyed; they become the embodiment of the insults and injuries experienced. The “rage can be channelled” against the person as a political symbol, she explained

Against the colonial masters, Kolkata may never have experienced this rage. What the city may have done is speculation, because not willing to endanger the statues, the first United Front government in 1967, after it toppled the Congress from power in West Bengal, took down and sent them into “quiet exile” in the “serenity of Barrackpore” as Guha Thakurta eloquently described the mammoth task of removing from their plinths and pedestals some 37 statues of colonial heroes, most on horses and some upstanding.

The removal of the two lines of equestrian statues on both sides of Kolkata’s Red Road connecting Writers’ Buildings, the seat of power of the British Empire, till the capital shifted to New Delhi, to Belvedere was a huge undertaking. It was a moment when the new coalition government in which the Communist Party of India (Marxist) was a junior partner, seemed to engage in a conversation about dismantling one part of the past and replacing it with another.

So down came George V and in his place was installed Bankim Chandra Chattopadhyay, the author of ‘Vande Mataram’. Lord Bentick was uprooted and transplanted in Barrackpore. Lord Canning, India’s first Vice Roy, was supplanted by Chittaranjan Das, an ardent nationalist and Congressman. Lord Auckland was sent off to Auckland in New Zealand and in his place the statue of the 18-year-old Khudiram Bose, who was hanged, was installed. Lord Northbrook, another Vice Roy, was replaced by Surya Sen, the revolutionary who led the Chittagong Armoury Raid and was martyred.

Lord Curzon was replaced by Sri Aurobindo, with his back turned to massive statue of Queen Victoria facing the west gate of Victoria Memorial. Mahatma Gandhi ousted Lord Ochterlony, a Massachusetts-born general of the East India Company. Lord Ochterlony on a horse found refuge inside the Victoria Memorial, where it is visited by art historians, Guha Thakurta said, in search of the best work produced by sculpture John Henry Foley.

Kolkata ejected Ochterlony on a horse, thereby banishing his presence from one of the busiest traffic points in the city. It then erased his name from a monument that today is locally and informally identified as the “monument” and formally as the Sahid Minar.

The statues are symbols and there is a politics embodied in them. It pops up in odd ways. The injuries, injustices and pain of being colonised and dominated, deprived and discriminated are distant memories. Contemporary reality, post Independence experience has swamped social, political and economic consciousness to the point where even the memory of the city’s radical transformation, from conservative and Congress ruled to progressive and Left ruled, is forgotten.

Also read: Of Political Icons and Vandalism: A View from History

Searching for the statue of Surrendranath Banerjee, which was made by Debi Prasad Roy Choudhury, cast in Italy, confiscated on arrival in Kolkata as enemy during World War Two, Guha Thakurta met an old employee of the Calcutta Transport Corporation which has taken over most of Curzon Park and uses it as a depot. Asking about the statue, she was told that there are many, including one of Rani Rashmoni, who defied the Raj’s revenue collectors; and there was just one statue of a “sahib”. Puzzled, she hunted for the sahib. It turned out to be Lenin. The old CTC employee said, every year it is cleaned and there is a commemoration.

The “colonial content has been emptied” and the relics of the Raj survive in street names, as statuary inside the Victoria Memorial or inside the inaccessible fastness of Flagstaff House, Barrackpore. The 37 statues removed by Jatin Chakravarty were neglected till Governor Viren Shah and later Gopal Krishna Gandhi rescued them, cleaned them up and installed them on pedestals at Barrackpore. Street names too have a significance, but in Kolkata, there is a stubborn attachment to the old names, even though the new ones are not ignored nor rejected.

Kolkata’s streets have multiple names; Ho Chi Minh Sarani is also Harrington Street, where the offices of the US Consulate General and the Deputy High Commissioner of UK are located. Benoy, Badal, Dinesh Bagh is also Dalhousie, and every screaming mini bus conductor knows it. There is a Canning Street, a Brabourne Road, a Wellesley Street also known as Rafi Ahmed Kidwai Street, a Wellington Square, named after the Duke of Wellington who defeated Napoleon, and then there is Hastings. It remains a police district; Fort William and the Race Course are located within it. And it gives access to the second bridge across the Hooghly. There is Marquis Street, Metcalfe Street, Kings Way, Outram Ghat on the river Hooghly, the Princep Ghat, Bentinck Street, Waterloo Street, Cornwallis Street and each of them has a new name. For older residents, the old names are familiar.

Happy to live with its paradoxes, Kolkata does not have a statue or memorial to Robert Clive, but it does have a street named after him. Clive Row, address of banks and businesses, and Jardine House, is not far from Writers’ Buildings, indicating that the city was not unhappy to remember him, even if he was the victor of the Battle of Plassey and East India Company’s takeover of the Dewanee of Bengal.

Symbols of the past can be removed or desecrated. But the past cannot be changed. It can be interpreted in different ways adding new perspectives, Chitta Panda, one-time curator of the Victoria Memorial, said. Scoffing at the idea of battling the colonial and imperial past, Panda said, “Bagh nei; taar sanghe juddho! (There is no tiger; what are we fighting against?)” For him, there are older and deeper injustices that persist and there is rage that occasionally erupts in clashes between caste Hindus and Dalits, in encounter killings, lynchings and hangings.

As an academic, Panda looks at history as the longue durée; there were empires in the past; there was slavery and exploitation. It may not be possible to redress every injustice. The point is to learn how these injustices were perpetrated and prevent a repeat of the same history, he said.