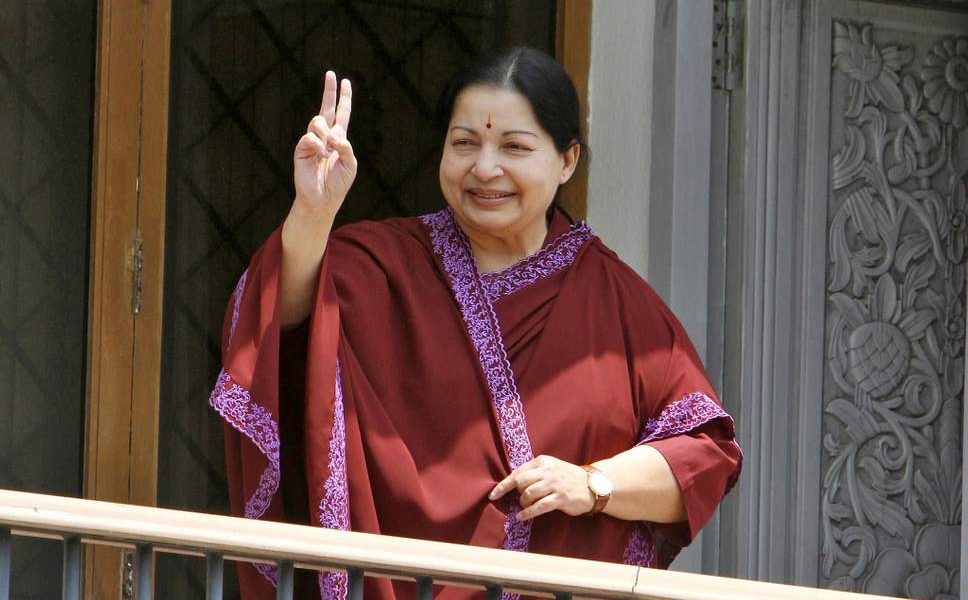 Jayalalithaa after her win. Credit: Reuters

The AIADMK seems to have pulled off a historic victory in Tamil Nadu. An election that many experts, pollsters and politicians thought would be a close call has thrown up a decisive mandate, giving the AIADMK a majority win. The party’s re-election makes it the first time in 32 years – since the massively popular former chief minister and actor M.G. Ramachandran (M.G.R.) – that an incumbent party has been voted back.

Most pollsters are trying to glean what one factor led to a mass voter decision, but analysts on the ground in Tamil Nadu say that we might be closer to understanding the result if we looked at not one, but several influences. Several politicians and exit polls went wrong, says political commentaror Gnani Sankaran, because they tried to pin a single motive on the voter. Here are some of the strongest factors whose interplay resulted in AIADMK’s victory:

The AIADMK remains the only single party in Tamil Nadu with the largest vote bank share. This comprises an intensely loyal rural voter base, that analyst Stalin Rajangam calls “subaltern voter”, which was mobilised first using the cinematic charisma of the AIADMK founder and three time chief minister M.G.R., and then through the many welfare schemes (not always freebies) that favoured the poorest of the poor. Today, the maximum number of local body leaders in rural Tamil Nadu are from the AIADMK; the party has been growing roots in an organised way.

The loyal vote bank also includes women. Female voters outstripped men by more than 4 lakhs this time, and while many parties tried to mobilise them with talk of prohibition, it is valuable to remember that they form the traditional vote bank of the AIADMK. Jayalalithaa, knowing this, wooed them with promises in her manifestoes, from discounts on two wheelers for working women to an increase in maternity assistance.

The AIADMK’s vote share in 2016 is more than 40% while the DMK cornered over 31% on its own (its biggest ally Congress got 6.5%). The party’s dependable rural base kept it afloat.

Political analyst A. R. Venkatachalapathy says that the DMK, on the other hand, did not play to its own strengths well enough. Due to its vote bank being smaller than its rival’s, the party wins through allies and power sharing. But this time around, the DMK did not accommodate some parties like Vijaykanth’s DMDK, because it was not willing to allocate more seats. “While DMDK did not manage a single seat in 2016, in an alliance with DMK, it could have helped both parties. DMDK could have fared better without Vijaykanth as a chief ministerial candidate and in an alliance with a stable party,” says Rajangam.

In this scenario, AIADMK’s pulled a harder punch with its core strength.

Secondly, senior politicians from the third front and the DMK admitted during campaign stage that AIADMK’s caste calculation in many places was astute. A former DMK finance minister called the identity formula “sharp and ruthless”. “We also do it, by fielding a majority community candidate but our alliances require us to balance minority and Dalit votes,” he said. The AIADMK has an old caste vote bank too, especially among the Nadars, the Thevars in the south and the Gounders in the west. These are the strongholds where the AIADMK has won most seats, its vote share only slightly marred by the BJP this election.

The third, and relatively recent factor, many analysts believe, is the large amounts of money that the party allegedly distributed. This allegation is not exclusively against the AIADMK, but the popular understanding in Tamil Nadu is that it is the party with the deepest and most centralised pockets. Rich candidates from all parties seem to have fared better than the rest. That both the big Dravidian parties bribe the voters does not necessarily neutralise or sway the votes decisively towards the bigger payer, but for this very unpredictability, cash for votes are also a factor in the election.

Fourth, the results show that DMK and other parties perhaps depended too much on the magic of anti-incumbency, both as an old reason for the state’s flip-flop and as a new performance-based judgement. Voters across affiliations admitted that the DMK under M.K. Stalin had the most well-planned and extensive campaign in 2016, preventing the kind of sweep the state usually sees. Its alliance with more than a 100 seats,up from 31 in 2011, can now create a strong opposition in the Tamil Nadu assembly; Sankaran says this happened due to its hard work. However, he says the party over-estimated the anti-incumbency mood, and depended too much on it. “We can see now that there was no anger vote,” he says. “They spoke about floods and Jayalalithaa’s non-performance since her corruption case, but we can see now that this was not enough.”

Finally, the People’s Welfare Front, an alliance of six parties (Dalit party VCK, CPI, CPI(M), Vaiko’s MDMK, Vijaykanth’s DMDK and Tamil Manila Congress) sought to offer an alternative to the Dravidian duo, but ended up both being washed out and moving votes away from the DMK. The front did not do well enough to win even a single seat, or even get the vote share its individual parties have cornered in the past when in alliance with one of the giants. But it threw a spanner in the works nevertheless. Many of the constituencies have had victories with smaller margins than Tamil Nadu usually does, and this could be attributed to a torn electorate, but also the third front.