How the Spectre of Hindutva Captured Politics in Kerala

Despite its lack of direct involvement in the state's politics, the BJP's actions have captured the state's agenda and propelled parties to pander to a sense of fearmongering.

A boat in Kerala's backwaters. Photo: Manfred Sommer/Flickr, CC BY 2.0

Hannah Arendt, a Jew who narrowly escaped Hitler’s final design for the likes of her, points to the moral collapse the political phenomenon Nazism caused not just among the perpetrators, the majority German Christians but also among its victims, the Jews. When fear starts its rule, it disorients and takes away all questions of ethics from everybody around, observed Hannah Arendt.

Kerala, a state often seen to be exceptional, based on achievements in the human development indices and counted as a political antidote to the Indian mainstream, seems to be demonstrating the Arendtian syndrome in the electoral scene, with local body elections just around the corner and assembly elections scheduled for next year.

In the coming local body elections, the United Democratic Front, led by the Indian National Congress with the Indian Union Muslim League as a powerful member, is moving towards closing a deal with the Welfare Party of India, an electoral outfit backed by the Jamaat-e-Islami.

This seemingly minor electoral consideration, which may very well fail to materialise, is symptomatic of what happens to the political imagination under certain circumstances. The Indian Union Muslim League is a regional party in northern Kerala which works for the communitarian empowerment of Muslims through social development. A party of largely subaltern Muslim masses, the league functions like a Muslim BSP or RJD.

As Kerala has historically worked along the lines of community reformation and political consolidation among Nairs, Ezhavas, Christians and Dalits, this model was neither demonised nor rejected – a clear proof of the party’s solid presence in the legislative assembly, with its visionary stalwart leader, C.H. Muhammed Koya having served as the state’s chief minister as well.

One of the key reasons for the general acceptance of Indian Union Muslim League was its categorical opposition to the idea of a theocratic state, which is at the core of the Jamaat-e-Islami’s theoretical framework formulated by Maulana Abul A’ala Maududi. For perspective, the Indian Union Muslim League would be akin to the BJP, if the BJP was categorically opposed to the RSS objective of creating a Hindu rashtra.

The Jamaat-e-Islami, as a party, has never aligned with the Indian Union Muslim League in Kerala, since its foundation in 1948. Moreover, the Jamaat-e-Islami has not only been attacking Indian Union Muslim League all these decades as an organisation but has also questioned its attempts to become a part of the mainstream, which according to JEI’s world view, is apologetic. So, this alliance, if finalised despite opposition, will be the first of its kind.

With the ideological incompatibility persisting, how did the IUML and JIH, which many fear will give political legitimacy to the JIH and change the very character of Indian Union Muslim League, begin to coalesce around a shared electoral adjustment?

One answer might be the fear prevalent in the minds of Malayali Muslims. Unlike the North Indian lower class Muslims and their ethical assertion after Shaheen Bagh and other movements surrounding anti-CAA events, where constitutional nationalism emerged as a clear way forward, Kerala’s largely middle class, politically solid and economically strong Muslim community is apprehensive, even though the BJP has only one MLA and no MP in the state. Though Islamists are demographically minuscule and irrelevant, their space in political discussions in Kerala has increased with the rise of Hindutva.

The fear that in Modi’s India, Muslims will go through a degradation – which will eventually lead to an ethnic cleansing – is being felt and responded to frantically in the state. This fear has brought in an overwhelming sentiment that Muslims must band together, without questioning fundamental ideological differences or raising ethical issues. While the Kerala Jamaat-e-Islami in no way poses a threat anywhere close to the ones in Pakistan and Bangladesh, it raises a crucial ethical conundrum: how does one oppose religious nationalism by using another sort of religious nationalism?

The youth wings of the most powerful religious organisations of Kerala Muslims, Samastha Kerala Sunni Student Federation and different sections of Kerala Nadwathul Mujahideen, have adopted a very strong position against the Indian Union Muslim League going into any alliance with a religio-political party like the Jamaat-e-Islami. This ethical stand against Islamism has been second nature to these organisations and they have always succeeded due to their much larger popular base.

But even so, these organisations are struggling this time due to the shift in the political environment, controlled by Hindutva and the resultant fear that politicians are trying to exploit. If they do manage to convince the Indian Union Muslim League and the United Democratic Front, led by Indian National Congress, to retract from these discussions, it will be a huge ethical win for the idea of secular democracy.

Nationally, the Indian National Congress stands to lose significantly from such an alliance since the Jamaat-e-Islami has been associated with a tarnished reputation – it was banned along with the RSS, by Indira Gandhi during the Emergency.

Maulana Maududi’s conviction by a Pakistani court for involvement in the anti-Ahmadi riots and his supporter’s role in the Bangladesh genocide have also not helped the organisation’s reputation.

Till the Welfare Party denounces Maulana Maududi theoretically (practically they actually have, since 1977) and rejects his brand of Muslim majoritarianism categorically, this impression is likely to stay. But the cynical state Congress leaders are only interested in consolidating power in their region with alarming short-sightedness. Congress leaders are trying to balance out an Islamist alliance by visiting Hindutva leaders and making pro-Hindutva statements (Congress Hindu and Muslim leaders seem to take turns for this)!

The Communist Party of India Marxist, the ruling party of the state, is also not free from such fears and missteps. In the IUML and JEI alliance, it sees an opportunity to whip up fear amongst Hindus and play soft Hindutva card against the perceived consolidation of Muslims. 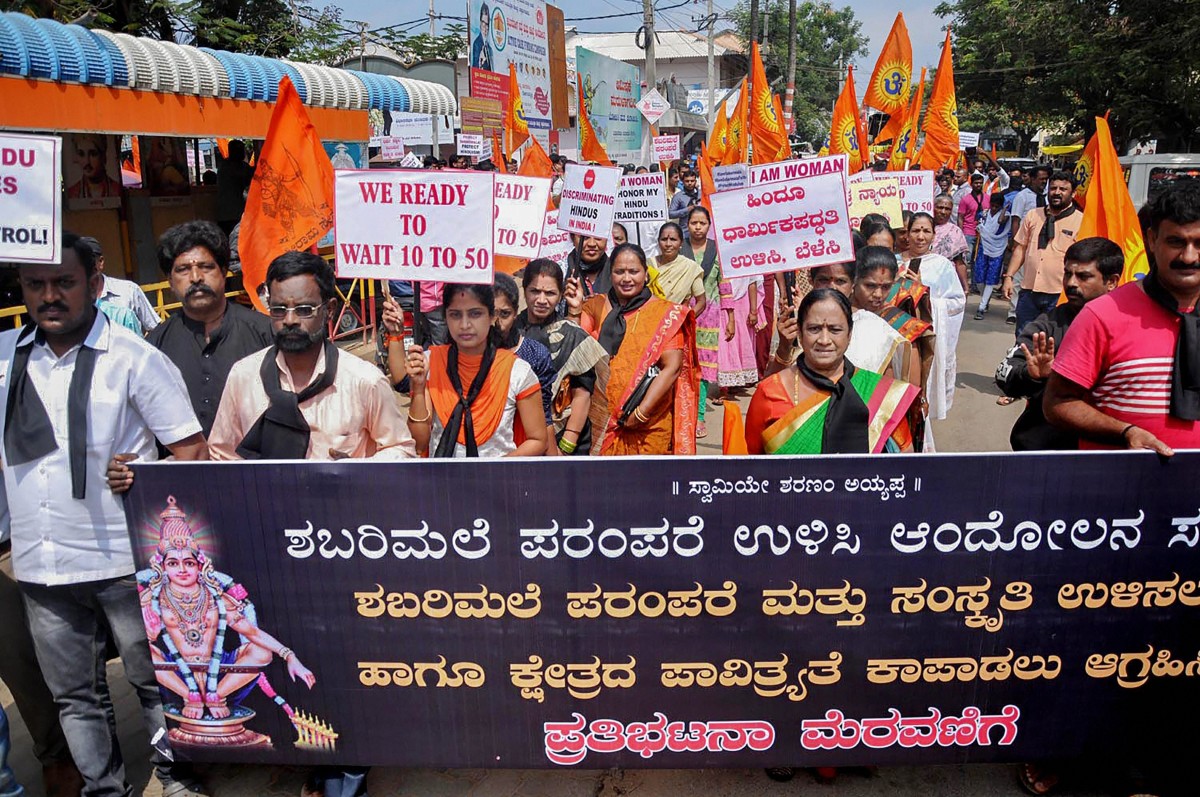 A protest against the Supreme Court’s Sabarimala verdict in Chikmagalur on October 31. Credit: PTI

The CPIM is paranoid about the BJP’s consolidated and powerful propaganda tools, perceived media witch-hunts into corruption cases and the Congress’s ploy to make the CPIM appear to be anti-Hindu when the issue of entry into the Sabarimala temple was at its height. Through an alliance with the Kerala Congress, the Christian variant of the IUML, and the use of Hindutva rhetoric, the CPIM is hoping to stay hold its ground during elections.

The common thread amongst the parties involved is that they are all pandering to fear, with a sense of victimhood and are cynically trying to retain their constituencies while burning all bridges around.

Between these three, the BJP now has no ground or organisational capacity to intervene in. While the party looks strangely innocuous in Kerala’s scheme of things, its impact in the state cannot be understated. The BJP’s agenda has taken over political imagination and destabilised the parties in the state to the point that they are doing exactly what the BJP, in the long run, would want them to.

The people of Kerala have the possibility to create a new political culture, actualising constitutional nationalism, furthering the rich Kerala legacy of inclusivism and proposing a whole new way of being in the techno-global givens for India. But led by fear and selfishness, the state seems to be on a slippery slope towards ethical degeneration.

If not identified and stopped now, when these changes at the deep structural level come up on top, there might be a very different state to reckon with!