While Noorbina Rashid's candidature is a significant development for her party, the underrepresentation of women in the candidate lists of various parties for the 2021 assembly elections is evident.

Kozhikode: The last time this author met Noorbina Rashid, the founding general secretary of the Indian Union Women’s League (IUWL), 20 years ago, she was an aspirant for the Kozhikkod-2 assembly seat. “I have already proved my mettle here as a two-time councillor, and I truly deserve a seat for the assembly elections,” Noorbina had said back then. Her eyes sparkled with confidence.

The Indian Union of Muslim League (IUML) had created history by fielding its first-ever woman candidate Qamarunnisa Anwar in the 1996 assembly elections and Noorbina’s confidence was not out of place. Even though Qamarunnisa lost the contest to CPI (M) leader Elamaram Kareem in 1996, it was a significant point in the Muslim political matrix of Kerala. No woman had contested any election for the party until 1990, when the district councils were constituted in Kerala with 30% reservation for women. This was the first election when the political parties were forced to field woman candidates, as per the statute.

Qamarunnisa Anwar’s candidature for the 1996 elections was a logical progression, but for the IUML, it stopped there itself. The defeat of the lone woman candidate was read as the poor ‘winnability quotient’ of women in assembly elections. The displeasure of religious outfits too contributed to this theory and the party gave a quiet burial to the idea of representation of women in the assembly.

In four subsequent assembly elections and an equal number of parliament elections, the IUML did not care to field any of their women leaders, even though they had a string of them who had proven their mettle in local governments. It took 25 years for Noorbina’s party to consider another woman for a seat to the state assembly. When this correspondent met her recently, she was in the middle of a house-to-house campaign. A bunch of party workers, including a handful of women, were accompanying her, most of them were very enthusiastic, especially the women.

Also read: Female Parliamentarians at a Historic High, but Parties Must Do More

“I don’t have any complaint nor do I think it is late,” says Noorbina Rashid. “The city of Rome was not built in a day, and I was ready to wait. My religion has taught me to be patient. I think the party has acknowledged not only me but the women’s community as a whole. There has been a lot of change in the past 20 years. It was not the same when I first contested as a corporation councillor.”

Even though she is contesting as assembly election for the first time, Rashid, a practicing lawyer of the Kozhikode Bar, is no stranger to the corridors of power. She was a member of the Kerala Women’s Commission during the tenure of the UDF government last time. She has also been a member of the state secretariat of the IUML.

It was in 2018 that the party inducted three women and two Dalit leaders into their state’s topmost decision-making body. During her tenure as a member of the Women’s Commission, she had found herself in a controversy when she defended the decision of some religious organisations to approach the court to lower the marriage age of Muslim girls. Many women’s organisations had demanded her resignation, accusing her of supporting child marriage. 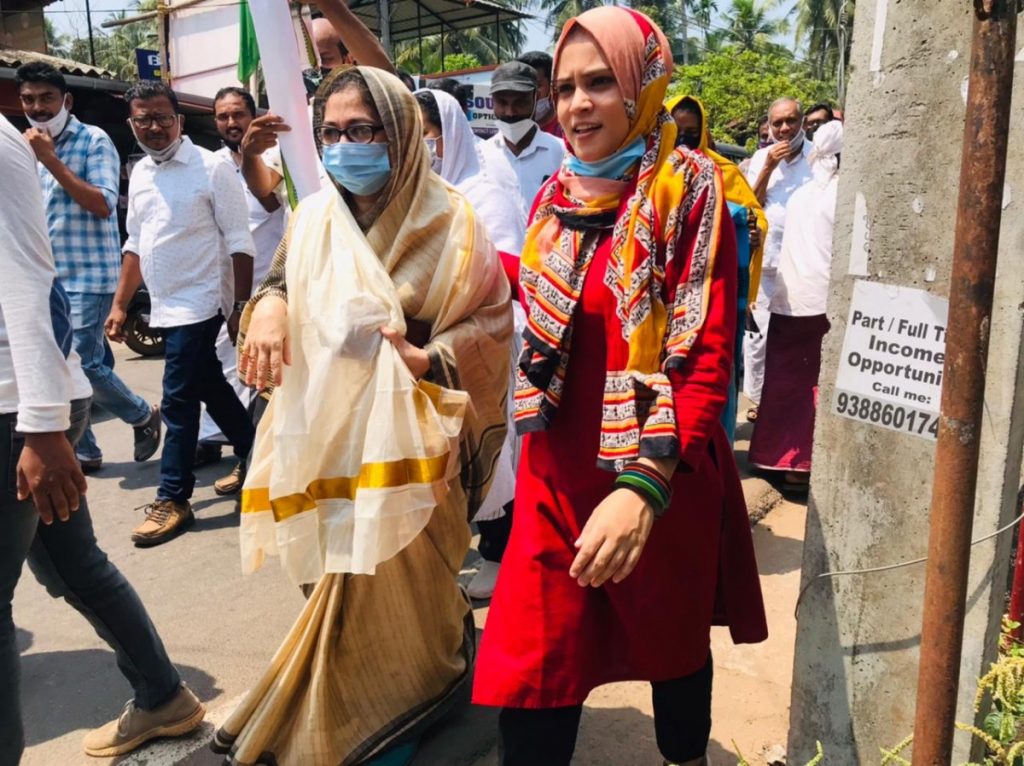 Noorbina Rashid during her campaign in Kozhikode. Photo: Special arrangement

Her standpoint on certain issues related to women’s rights and freedom does not go well with other feminist groups too. The letter by the IUWL to the prime minister demanding not to increase the marriage age of women being one of it.

Anima Muyarath, a Kozhikkode based lawyer and researcher, was suspended in 2014 for a Facebook post in which she complained about the ‘silly behaviour’ of some male lawyers. Muyarath says, “Rashid had acted very insensitively towards me in my case with the Kozhikode Bar Association. She was a member of the Kerala Women’s commission then. She was of the view that the Bar Association does not qualify as a workplace and my complaint would not hold water. She was clearly trying to dissuade me from going forward with the case.”

The decision to field a female candidate took shape in the IUML after its student leader Fathima Thahiliya, the national vice president of the Muslim Student’s Federation (MSF), came under the spotlight by taking on chief minister Pinarayi Vijayan. The chief minister had accused the IUML of “hijacking” the UDF by “dictating terms to Congress”. Thahiliya hit back at Vijayan sharply by saying that he has no locus standi to interfere in the internal matters of the UDF or the IUML, a statement that took the social media by storm.

Thahiliya’s overnight fame triggered a discussion about fielding her as a candidate this time, an idea which went down well only with the younger leadership of the party. But surely, it must be the subsequent deliberations that lead to the candidature of Noorbina Rashid. The IUML leadership had to work overtime to win over religious outfits that back the party.

On the other hand, the underrepresentation of women in the candidate list of all the major fronts has grabbed attention this time. This was largely due to the protest by Lathika Subhash, the state president of the Mahila Congress, who tonsured her head at the Kerala Pradesh Congress Committee office, as she was denied a ticket from Ettumanoor constituency. She accused the Congress leadership of not wanting women to contest from more segments.

Kerala Mahila Congress Chief Lathika Subhash gets her head tonsured in front of the KPCC office, in protest against the denial of party ticket in the forthcoming assembly elections in Thiruvananthapuram, Sunday, March 14, 2021. Photo: PTI.

Many woman leaders, cutting across party lines, including the state health minister K.K. Shailaja and CPI leader Annie Raja, had raised concerns over the diminishing number of women candidates.

The ruling LDF has fielded 15 candidates, just above 10% of the 140-member assembly. The UDF has fielded 10, and the NDA’s list includes 13 women this time. In the previous elections, the LDF had fielded 16 women candidates of whom 8 had won their seats. There are two women in the Pinarayi’s cabinet – K. K. Shailaja and J. Mercykkutty Amma, which is a first in the state.

There is widespread resentment among women political workers and leaders, who feel that they are being grossly ignored when it comes to the selection of candidates.

“I do not approve of the politics of Noorbina Rashid or Shobha Surendran (BJP leader), nor do I vote for them, but their fight inside their respective parties is indeed significant,” says a woman leader of the CPI (M) on the condition of anonymity.

“Noorbina or Shobha represent regressive politics according to my standpoint. But there are so many male leaders also holding the same political stance. We have to fight them politically, but profiling women and judging them as bad candidates is another thing. Let them contest and get defeated in the election process,” she adds.

The CPI (M) leader does not mince her words in criticising her own party and its allies.

“This anti-woman attitude is prevalent in the CPI (M) too. We have only 15 women contesting with the party tickets. I am sure that we have many leaders who fit the bill waiting in the wings. If we take a closer look at the list of candidates, we can see the absence of many known names who have been at the forefront of many struggles. It is inevitable that this should change, and I wish our party takes the lead in this direction,” she hopes.