New Delhi: Delhi chief minister Arvind Kejriwal today sounded the poll bugle in Delhi with the release of his government’s report card on work done over the last five years. He said that his government has been honest and had worked hard to improve the lives of the city’s citizens – especially in the key areas of water, electricity, health and education.

Speaking at the release of the report card, Kejriwal said one key feature of his government was that no charge of dishonesty had been proved against it. “We provided an honest government – we welcome any kind of scrutiny. We have nothing to hide. The CAG has already appreciated our work after its audit. The CBI has given us clean chit on multiple occasions. Any new investigations are welcome,” he said.

He also took a dig at the way the Centre has hounded him through central agencies for several years by saying: “People who are in public life should always be ready for any scrutiny”.

Talking about his government’s performance, he said, it has worked hard to provide social welfare while showing financial jurisprudence. “The budget increased from Rs 31,000 crore to Rs 60,000 crore per annum. The government has been running in profit for the last five years and this certificate has been given by the Centre,” he stated.

Kejriwal also spoke about the work done towards enhancing security in Delhi. He said 1.40 lakh CCTVs out of the 2.80 lakh that were planned have been installed. For women’s safety, he said that 210,000 new street lights would be installed from December 26 onwards. “We will not compromise on women’s safety,” he asserted.

The chief minister said Rs 8,000 crore has been spent on undertaking development works in unauthorised colonies so that residents there can lead more comfortable lives. Moreover, he said, 1,130 new colonies have been provided sewer lines.

On work undertaken in the key area of education, for which his government has won accolades worldwide, Kejriwal said: “We have made provisions for education for every child born in Delhi while increasing the budget threefold.”

He added that the government has also “prohibited most of the private schools from hiking fees in the last five years”.

Similarly, he also made a mention of the free power scheme that the AAP government introduced to benefit the poor. “It’s a matter of great pride for me to say that Delhi is the only city with 24×7 electricity and the only city to get free electricity up to 200 units.”

Likewise, he elaborated on the success of the free water scheme. “When we came to power, only 58% of households in Delhi had access to water. This has now increased to 93%. The remaining 7% will soon get water supply.” Consumption of up to 20,000 litres of water per month is free in the city, he said.

The AAP leader also enumerated on the success of the mohalla clinic and other schemes that have made health facilities very accessible for Delhi’s citizens. “No citizen of Delhi will have to worry about his/her medical expenses anymore. We have made free healthcare accessible to everyone and have inaugurated more than 400 mohalla clinics and transformed the government hospitals,” he said.

On the transport front, Kejriwal said the Delhi Metro corridors have increased from 173 km to 290 km in the last five years; bribery which was a norm in getting driving licences made has been done away with and new buses were being procured to improve the public road transport. 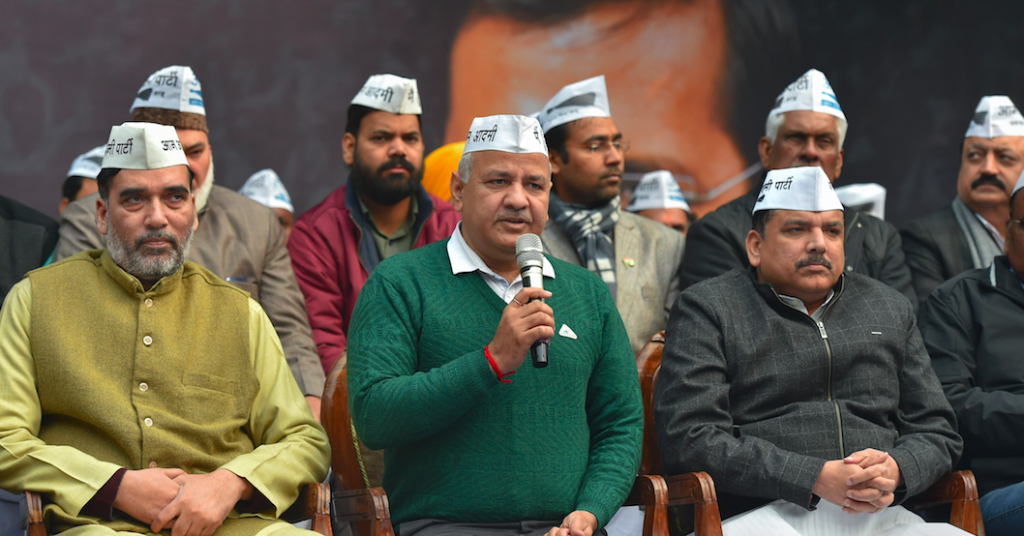 Kejriwal also pointed out that over 3,000 lives of road accident victims have been saved through introduction of the ‘Farishtey Dilli Ke’ scheme in which good samaritans who take victims to hospital are honoured.

On the need for his government to give such an elaborate account of its performance, Kejriwal said “people are the real ‘malik’ (owners) in a democracy, an elected government is only there to serve them. It is the right of the owner to seek an account from the servant. Therefore today we are here to give an account of our five years of work.”

Earlier in the day, Kejriwal also distributed 65,000 certificates of residence proof to jhuggi dwellers which entitles them to a flat each in the vicinity of their existing habitation.

Speaking at the even, he spoke about how his government provided permanent houses to over 5,000 jhuggi dwellers. “You should have seen the tears of happiness in the eyes of people when we handed them the keys to their flats. They themselves broke their hutments and moved to their flats. They have earned a life of respect, you too would get one.”

With these certificates, the CM assured the residents that no one would come to break their hutment. “Once you get permanent houses, then you can break your jhuggi and move into the new flats.”

AAP hoping to win all 70 seats this time

Kejriwal hoped that due to his government’s work, people would this time give his party all the 70 seats in Delhi assembly, even more than the record 67 it won in 2015.

Meanwhile, AAP’s Delhi unit chief Gopal Rai spoke about how the party went beyond the 70 promises it made in the last manifesto to come up with important schemes like the one pertaining to doorstep delivery of 100 services and provide 200 units of free power to the people.

He also announced the party’s campaign strategy for the coming days. “From December 26, we would launch our mega door-to-door campaign. Before we won 28 seats in 2013, leaders used to call people to a spot and address them. We were the ones to introduce door-to-door campaign and this time we would approach 35 lakh households to tell people about our work.”

Delhi deputy CM and education Minister Manish Sisodia said “education is an important thing in people’s lives – for while all other things impact the present, it affects the future of the people.” As such, he said, a lot of emphasis has been laid on the sector by the Kejriwal government.