I Was a Human Shield

"I was made a human shield as a child. I have carried this burden till now; today I feel the need to talk about it." 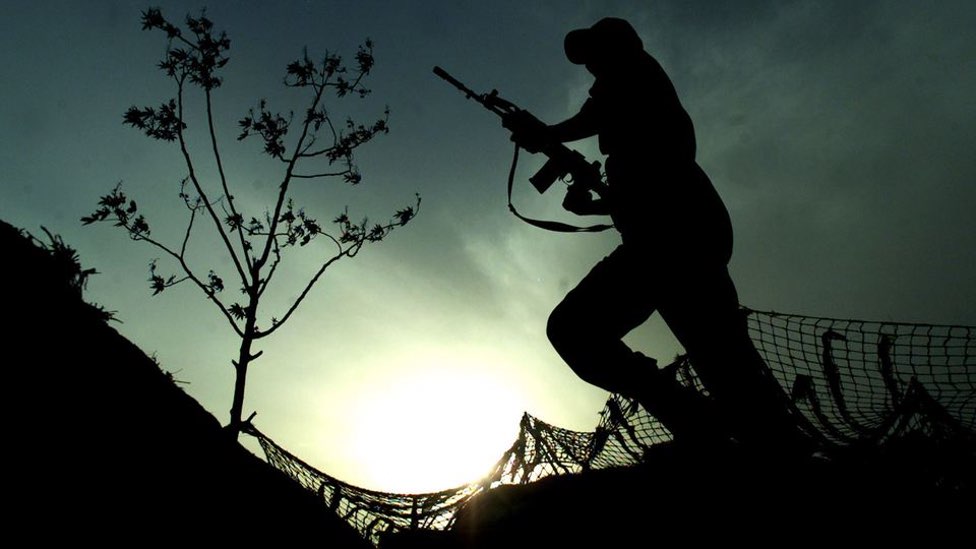 Waer (convoy duty) was a dictate set by the Indian army. Six men from a village were to search for explosives ahead of patrol parties on a rotation basis. Credit: Reuters

The video of Farooq Ahmad Dar tied to an Indian army vehicle as a human shield may have got the attention of the world, thanks to social media, but this was not new to Kashmir. These stories just never came out.

I am witness to this. I was made a human shield as a child. I have carried this burden till now; today I feel the need to talk about it.

That evening in 1999, when I was hardly six or seven years old, Habib chacha – a craggy-faced old man in his 60s, who always seemed to be lost in melancholic thought – was assigned to inform every house about their waer the next day. “Sabes chu waer,” Habib chacha said in his croaky voice.

Waer (convoy duty) was a diktat set by the Indian army at the time. Six men from each village were to search for explosives, clearing the way for patrol parties, on a rotation basis.

This was the cheapest way out for them and they had the entire population of Kashmir at their disposal.

As a child, I was always ready for cheap adventures and challenges. I thought of myself as no less than any superhero, with a toy gun to save the world. For me, ‘waer’ was just another adventure. I had no idea what it meant to be at waer until it finally happened to me as well.

My mother was ill and had been taken to the hospital by my father and elder brother. It had to be either me or one of my sisters; I chose myself.

There was terrible treatment in store for those who resisted – something I was then totally unaware of. If someone didn’t show up, the soldiers would call them to their camp and torture them with electric shocks, for instance and more.

That night, I couldn’t sleep out of curiosity. I kept rolling over in bed, thinking of the millions of ways in which I could save the world with the magical powers of my toy gun. The call of our very own scarecrow (as people used to call him), Habib chacha, continuously reverberated in my head until the muezzin gave the azaan – my sign to get ready.

I literally jumped out of bed to follow my sister, who had prepared nun chai (salt tea) and makai tcthout ( maize chapati).

“Laej sai balaai,” (‘stay safe’) my sister said while brushing my head with her hand. She was worried, but back then I couldn’t understand why. I ran out with a chapati in hand and a piece of it in my mouth. I usually hid my toy gun in my waistband but this time, because of the excitement, I forgot to bring it along.

Right across the street, five others were waiting for me to start. I walked past them one by one, eating makai tcthout and humming a tune.

“Moul katie chhui? (Where is your father?)” Rashid kak asked me. “Haspataal (hospital),” I looked up at him and answered. “I will be going with you for our waer.” Looking at me with complete disapproval, Rashid kak said something that I can’t remember.

I could see fear and worry on the faces of the other five, but it didn’t bother me much.

“Jai Hind! Jai Hind! Jai Hind!” they all kept sloganeering in unison and, feeling competitive, I kept doing it louder and louder. One of the army men then started beating up Gul kak, I’m still not sure why. I regretted having left my toy gun at home; I wanted to take revenge. “Where is your bastard father? Has he sent you to die?” one the army men asked me. He then came forward, pressed my cheeks tightly with his fingers and said, “Say something”. I replied quietly, “My mother is not feeling well. My father and brother have been in the hospital with her.”

“Remember, this is more important than anything else in the world,” he said. I nodded my head in surprise; I didn’t know what was happening.

We had brought sticks with us from home, we were asked to walk ahead. We were scanning the path with our sticks and they were following us. “Saalon azaadi chaahate ho (You bastards want azaadi),” they were abusing us from behind, but we kept quiet and continued scanning the road.

At one point, I was asked to go inside a culvert. “Go inside, little terrorist,” one of the army men ordered. I hesitated and stopped, but a harsh push from the back shoved me inside. It was dark, my whole body started trembling. I somehow pulled myself together and started crawling inside the culvert. Finally, after struggling for about ten minutes, I came out from the other side.

My knees and ankles were bruised and bleeding. I’m not quite sure when I started crying. All I could say was “Moojae, moojae (Mother, mother)”.

For the first time, my excitement for adventures turned into fear. I didn’t know that this humiliation would stay with me forever. But that was the day I realised that my toy gun has no power and I am no superhero.