If the Government Listened, Kashmir Would Be Different, Say Former Interlocutors

According to members of the J&K Interlocutors Group, recommendations made after the unrest in 2010 could have prevented the current spell on violence in the state, had they been implemented. 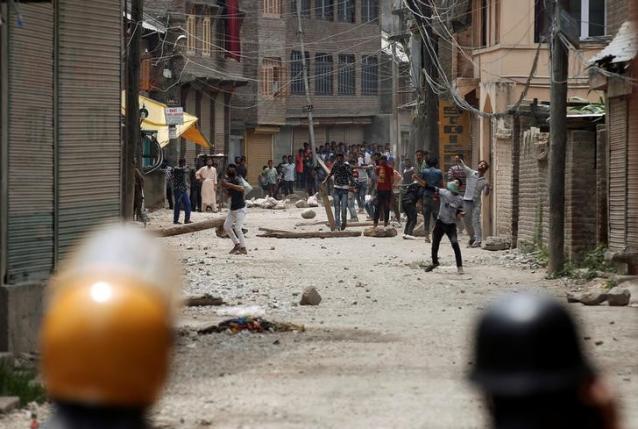 Protests against the killing of Burhan Wani in Srinagar. Credit: Reuters/Danish Ismail

New Delhi: The latest uprising in the Kashmir Valley is increasingly being equated with the unrest in 2010, which left nearly 120 people dead. Members of the J&K Interlocutors Group, who had submitted a report on the reasons behind that violence and ways to prevent its recurrence, insist that the present situation in the Valley would not have arisen if the UPA government had not ignored their recommendations and the Narendra Modi regime had taken necessary action on time.

With violence in the Valley peaking and the situation increasingly getting out of control, both journalist Dileep Padgaonkar and academician Radha Kumar told The Wire that the remedy lies as much in necessary and strong anti-militancy measures as in the deft, delicate and humane handling of protests within towns and cities. Simultaneously, they have demanded that specific youth- and employment-related programmes should be implemented and the much-delayed common minimum programme be set rolling. But, as Padgaonkar said, “by and large the report was ignored by the UPA. I had been assured that the report would be tabled on the floor of the House and that there would be a debate on it and all the parties would be allowed enough space to deliberate on the recommendations, but that was not done. And the present government has not done it either. Had they taken some serious notice of the recommendations we had made, perhaps we would not have reached the situation we have in Kashmir today.”

Though the separatists had stayed away from the talks and the prime reason for this was stated to be the non-implementation of the earlier recommendations of K.C. Pant, N.N. Vora or the five working groups made to the Manmohan Singh government, Padgaonkar said “that was not the only reason why the separatists did not meet the interlocutors”.

“They felt that they needed to talk directly to the prime minister or the home minister and they felt that we were political lightweights and therefore it was not right to engage with us. However, in another capacity, namely as member of the Ram Jethmalani-led Kashmir Committee, I did meet the Hurriyat groups on several occasions and discuss things with them. So broadly I had an idea of what they were thinking. And that is also reflected in our report.”

Padgaonkar, whose insistence on involving Pakistan in Kashmir talks was criticised by the BJP for “exceeding his brief”, maintained that “it has been proved again and again that if you discuss all issues of contention with Pakistan, including Kashmir, then you do create a certain atmosphere in the Valley which allows you to move forward with various stakeholders in the state”.

However, he said, India’s stand on the issue was very clear and was laid out in the 1994 resolution passed by parliament. The resolution stated that “the only issue to be discussed with Pakistan vis-à-vis Kashmir is to get the Pakistan-occupied-Kashmir back into the Indian Union”. There are similar resolutions passed by the national assembly of Pakistan, he said, adding that “Kashmir has been discussed between India and Pakistan right from 1947-48, so there is no reason why it cannot be discussed now. Both sides know how far each side can go and the red lines are pretty clear. But I still believe an engagement with Pakistan is pretty important if the internal situation in Jammu and Kashmir is to be taken care of”.

But right now, Padgaonkar said, the situation “appears to have gone out of hand because the nature of militancy has changed since we last submitted the report. So you need to take a fresh look. By and large our recommendations are still valid”.

When asked whether resentment also had to do with people feeling betrayed by the Mehbooba Mufti-led People’s Democratic Party as it allied with the BJP to form a government, Padgaonkar said “there is no major resentment. Let us not forget that Mehbooba Mufti got elected with a very handsome margin in the Anantnag poll which was held recently and that can also be seen as some kind of an endorsement by people of this constituency of the alliance”.

On the whole, he said, both “the coalition partners have been conducting themselves with a tremendous sense of responsibility. In the past two years, the BJP has not been insisting on its pet subject of article 370 and they have taken care to see that they work with the state in tandem on the most important issues, including security, as has been seen in the past few days too”.

On how the protests in the wake of militant commander Burhan Wani being killed are being tackled as compared to 2008, Padgaonkar said so far it has been a two-pronged approach involving very strong counter-militancy measures and development and good governance measures. “Now the fact is that this kind of an approach has its limitations. Unless and until you address the basic political question, you are not going to make much headway. These political questions are quite complicated because political aspirations differ and indeed are divergent from the needs of the coalition in Jammu and Kashmir.”

Kumar said the interlocutors had warned the government that the impact of the 2008 deaths could very well lead to militancy and the impact would be felt in a few years time. Therefore, they had suggested a series of very specific actions to prevent the violence from recurring. “In those actions, there were several youth specific actions. We had talked about release of those stone-pelters who did not have very serious cases against them. That I believe this government now took up. Had it been done earlier, it would have helped.”

But on the issue of employment generation and other social programmes brought up by the Rangarajan Committee, she said the interlocutors had demanded that they be scaled up to match the needs of the youth. “But the implementation was terrible. We had stated that do not just give scholarships for the students of the state to come out of Kashmir, rather try and get people to come to the state to teach them so that training and work-related programmes could also be undertaken.” But that did not happen.

The programmes of the government started with absolutely no connection to the youth in Kashmir. “So they came out with programmes for sending Kashmiri students to universities outside the state. They did not do any sensitisation programmes for the students from Kashmir or for other students in these host universities. It was inevitable that more grievances would come,” she said, referring to the problems students from the state experienced outside.

On the issue of separatists staying away from the talks, Kumar also said that “it is not that they were not willing to engage at all. They wanted to engage with political representatives. When they did engage it was with the deputy home minister, they also had talks with Mr. [P.] Chidambaram (the then home minister). So they wanted people in political authority who could take political decisions. That was their main reasoning for not talking to K.C. Pant, N.N. Vora or us”.

On the insistence of the separatists to always seek the presence of Pakistan on the table when they want to discuss Kashmir with the Indian government, Kumar, who had at a conclave last November stated that “Kashmir hasn’t been as bad as this in a long time”, said the situation is very different this time. “The Pakistan situation is completely different today. In the late 90s, you had the nuclear test and you had huge pressure on Pakistan, which got Nawaz Sharif and Atal Bihari Vajpayee talking. Then you had the military coup and there was 20 times more pressure on Musharraf. The EU had put conditions for releasing funds and asked him to crack down on terror groups and start talks with India. The same pressure came from the US as well. Some pressure or at least advice would have come from China too. But I do not see that same pressure coming now. So I see no reason for Pakistan to change. For them it is a wonderful situation. They will seek to benefit from it. In 2010-11, there were recorded calls from there saying ‘please see that a few more youth are killed in stone-pelting, tell them to get killed’. So I am sure similar stuff would happen right now too,” Kumar said.

According to Kumar, Pakistan has already started aggravating things. “They have sent out messages to all their embassies saying play this up, raise the issue of extra-judicial killing, support the Kashmiris in their struggle for independence. Hafiz Sayeed is making speeches that ‘I am recruiting people for jihad’. They would not want the protest to die down, because the longer it lasts the better it is for them,” Kumar added, admitting that “these are unfortunate times”.

“Political talks or the common minimum programme are long drawn out processes that take five-seven years to reach acceptable conclusions that would be accepted on the ground. Since they wasted 30 years, the sooner they start the better,” she continued.

But at the moment, she said, if the media reports are indeed correct that calls are resounding from all the mosques saying ‘come and join Jihad against India’, then this was unprecedented. “So your problem is more serious right now. See how many people were at Wani’s funeral. If it is upwards of a lakh, then it shows you it is a very different situation. In any case we have seen this situation brewing. Earlier in 2010, you had mobs coming out, but they were mostly men. Now you have women and children also. You have people storming the police stations, attacking and burning them. Look at the scale, how much has it gone up in the last five years.”

Therefore, Kumar said, the need of the hour was for the elected political leadership to step in and calm the people. “One reporter from Kashmir made a very valid point: Where is the elected political leadership? They are not out making speeches, they are not appealing, they are not using their connections, say to ask the Ullema to get the mobs to stop. What are they doing? Kashmir has a powerful Waqf Board and religious organisations. They need to first speak to all these people to calm things down and then political efforts should be initiated to resolve issues.”

Kumar also blamed the bitter election campaign followed by the formation of the coalition government, as well comments on the beef ban and other such issues, for destroying the atmosphere in the Valley. “The BJP began controlling its cadre only in the last six or seven months, but by then it was very late, especially since militancy was already there.”

She said while the PDP-BJP coalition was required to deliver immediate results, and therefore should have shown within three months that it would work for the improvement of the situation, they began their efforts too late. In the current scenario, she said, “one can only hope that the Centre and the state government realise that this situation requires big action of a generous kind and that they must rise with a political message.”

Note: This article was edited as the original version erroneously stated that the 2016 protests were equated to the uprising in 2008. It was in fact equated to 2010, when the interlocuters visited.