No other Indian politician possessed the ability for oratorical flourish like that of Karunanidhi. His political speeches recorded in the form of cassettes were as popular as Tamil film songs. 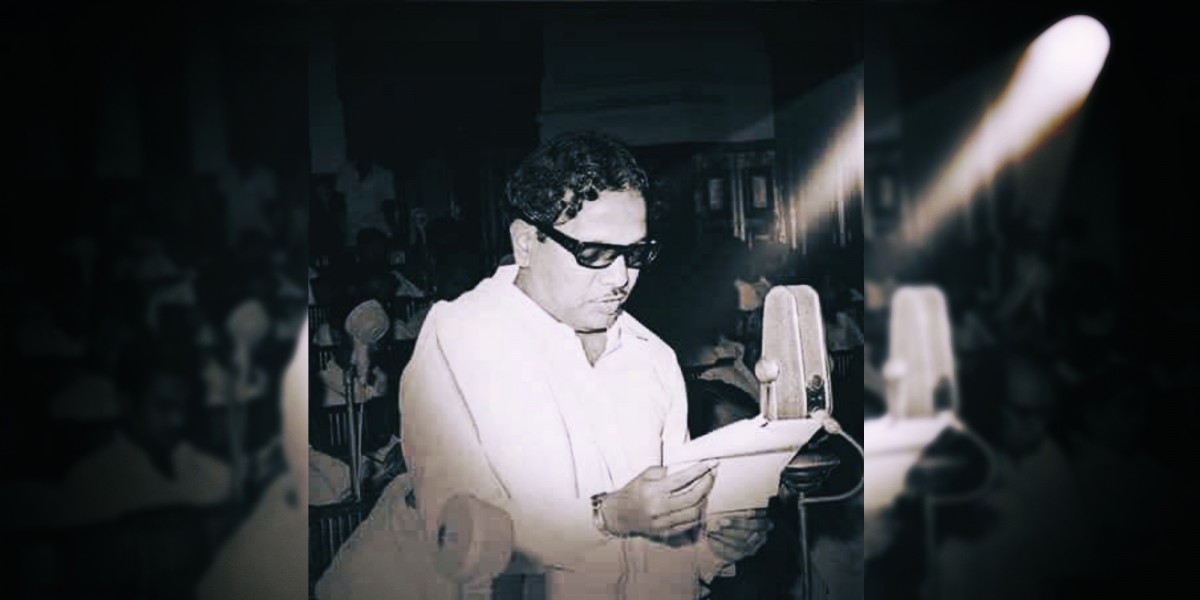 Muthuvel Karunanidhi – also referred to as ‘Mu Ka’ but more widely known as Kalaignar (‘artiste’) – was a politician par excellence whose name was synonymous with not just his party, the Dravida Munnetra Kazhagam (DMK), or the politics of Tamil Nadu for half a century but with the world of Tamil letters and culture as well. As a strong advocate of federalism and state rights, he was also a key player in national politics.

Born on June 3, 1924 in Tirukuvalaiyur in Nagapattinam district to Muthuvelu and Anjugam Ammal, Karunanidhi was inspired by the Dravidian movement as a teenager. His passion for the Tamil language led him to join the first anti-Hindi agitation launched by Periyar in the late 1930s against the Congress-led provincial government’s decision to teach the language in schools. At the age of 14, he started writing and circulating a handwritten newspaper to the members of the Dravidian movement. The DMK’s official mouthpiece Murasoli had its origin in that handwritten effort. One of the highly symbolic forms of protest during the anti-Hindi agitations was renaming Dalmiapuram – the Trichy town that was home to Dalmia cements – to its original Kallagudi as the former was a ‘Hindi’ name. As part of the struggle he slept on the railway tracks and – when he finally succeeded – was immortalised as the ‘Hero of Kallagudi’ in various forms of popular culture.

The DMK has its origins in the South Indian Liberal Association popularly known as the Justice Party, whose founding principles were social justice and equality. The Justice Party was part of the diarchy (provincial government) during colonial rule. A party of non-Brahmin elites who came together to check the Brahmin hegemony of the time slowly ended up replacing that with their own. It was then that Periyar – as E.V. Ramasamy, the iconoclastic former Congressman was know – joined the Justice Party and altered the nature of its elite leadership. In 1944, the party was dissolved to re-emerge as the Dravidar Kazhagam (Federation of Dravidians). C.N. Annadurai became the DK’s general secretary and played an integral role in taking its message to the wider public.

Five years later, however, unable to commit himself to the highly rationalist and atheistic principles of the DK, Annadurai and five of his comrades broke away to form the DMK. The new party was inaugurated on September 17, 1949, at Robinson Park in Chennai. Karunanidhi, who was 25 at the time, was not among the founding members of the DMK but would later have a meteoric rise to prominence because of his organisational skills and political acumen. In 1957, he was elected as a member of the Madras legislative assembly, winning the Kulithalai seat. He would then go on to win every single election he ever contested, a feat that none could emulate. Even when the AIADMK-Congress combine made a clean sweep of the 1991 elections following Rajiv Gandhi’s assassination, the DMK managed to win two seats. One of them was  Karunanidhi from Harbour, the other Parithi Ilamvazhuthi from Egmore. 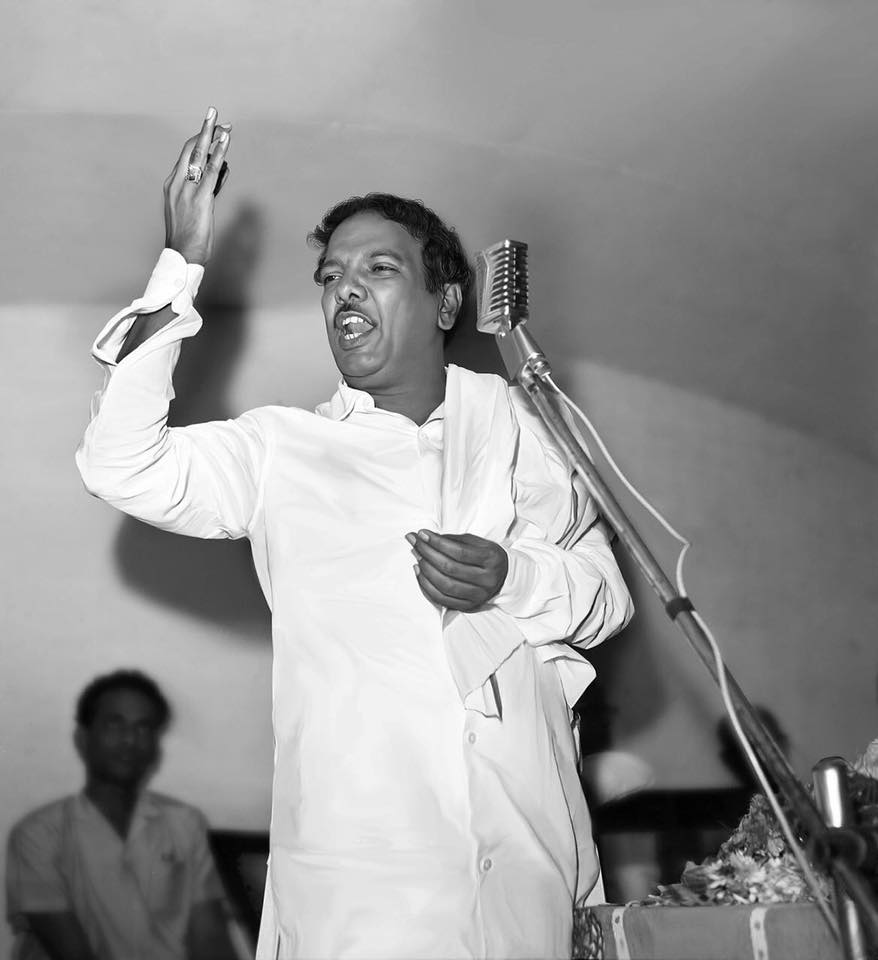 Karunanidhi was elected DMK treasurer in 1961 and the following year rose to become deputy leader of the opposition in the state assembly. When DMK captured power in 1967, he became minister for public works. After the demise of Annadurai in 1969, he outwitted senior stalwarts like V.R. Nedunchezhian to become chief minister of Tamil Nadu with the support of another party leader, M.G. Ramachandran (MGR).

Karunanidhi’s first stint as chief minister – which ran from February 1969 till the imposition of President’s Rule in January 1976 during the Emergency – is best known for his slum clearance schemes, abolition of hand-pulled rickshaws and electrification work. His rule was also marred by charges of corruption, an issue raked up by MGR who, in 1972, had left the DMK to form the breakaway All-India Anna Dravida Munnetra Kazhagam (AIADMK).

Karunanidhi had to spend the next 13 years in the opposition as MGR’s party won the assembly elections of 1977, 1980 and 1984. In 1989, the DMK leader came back as chief minister of Tamil Nadu and also played   a major role in the formation of the National Front and in making V.P. Singh the prime minister.  This also led to the implementation of the Mandal Commission report recommendations on reservation for the other backward classes (OBCs), which Karunanidhi in an interview recalled as a major effort towards the realisation of a politics of social justice. In January 1991, however, his government was dismissed by the Centre – Chandrashekhar was prime minister with the backing of Rajiv Gandhi’s Congress – which cited the violent activities of Tamil separatists from Sri Lanka. The elections that followed saw the AIADMK win handily.

Karunanidhi returned to power in 1996 for a turbulent five year term which saw major caste clashes in the southern districts of Tamil Nadu and also communal violence in Coimbatore. The frequent caste clashes, which were a by-product of the emergence of militant Dalit politics in the state, led Karunanidhi to establish ‘samathuvapurams’, or ‘equality villages’, to prevent violence. The novel idea, which saw a great decline in caste clashes, did not however result in communal harmony.

Out of power from 2001 to 2006, Karunanidhi and the DMK found themselves back in the saddle in 2006 but internal bickering and conflict within the party because of his sons M.K. Stalin and M.K .Alagiri marred his last term. The end of the civil war in Sri Lanka also became a thorn in the flesh of his government as a lot of Tamil nationalist groups accused Karunanidhi of not getting New Delhi to put pressure on Colombo despite being part of the Central government. 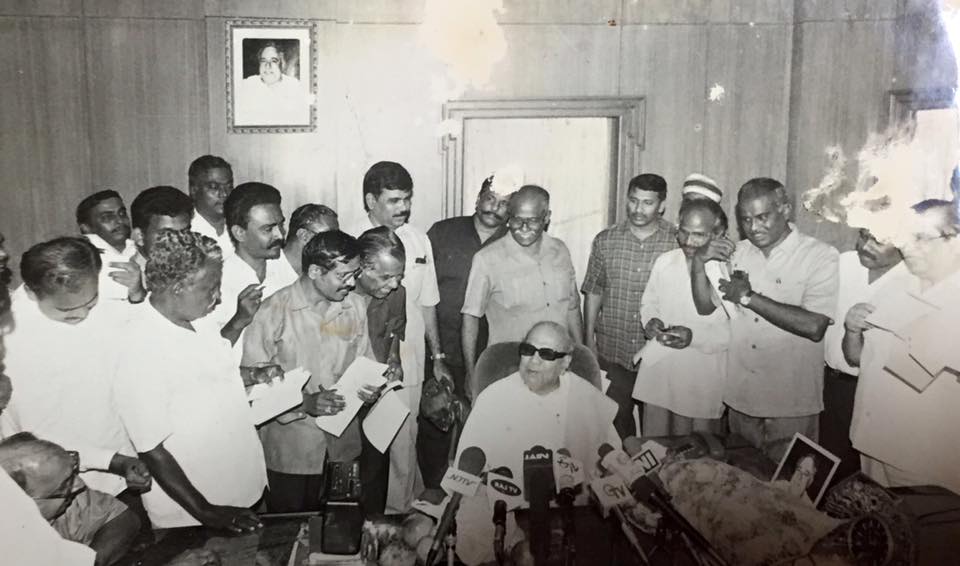 In 2011 and again in 2016, Karunanidhi suffered back to back defeats to the AIADMK. Despite his old age and ill-health Karunanidhi campaigned widely during the 2011 elections and also spoke in public meetings in 2015. However, he slowly transferred leadership of the party to Stalin, who was also made the deputy chief minister in 2011.

Karunanidhi was a staunch advocate of state autonomy and consistently voiced his opposition to the interference of the central government in state affairs.  One of the major aspects of his political career was his ability to keep the party intact, despite suffering various setbacks and breakaways – MGR’s 1972 exit and more recently,  Vaiko’s exit in 1994 to float his own party, the Marumalarchi Dravida Munnetra Kazhagam. Being out of power for 13 years did not affect the DMK, as Karunanidhi was able to keep his flock together. His letters to party cadres in Murasoli were part of his effort at keeping the party intact by communicating even with the grassroot workers.

No other Indian politician possessed the ability for such oratorical flourish like that of Karunanidhi. His political speeches recorded in the form of cassettes were as popular as Tamil film songs. They formed an integral part of its aural culture and his speeches were regularly played during public meetings and formed a regular feature of public life for close to three decades from the 1960s to 1980s.

Karunanidhi was also know for his wit and sarcasm, his press conferences were genial and always  displayed the master politician’s lighter side. During one such conference in Madurai, when journalists complained to him that “Neenga pathrigaigalai pirichu paakureenga” (‘You are favouring certain publications’), he immediately replied, “Pathrigainale pirichu thane paakanum” (‘After all one has to flip through the papers to read it’). True to his mastery over Tamil, Karunanidhi cleverly punned on the word pirichu, which means ‘to favour’ and ‘to flip through’.

Traversing the literary and political domain

Karunanidhi loomed so large over the Tamil political stage that one forgets he was also a literary giant; he was often referred to as ‘Muthamizh Arigna’r due to his excellence in the field of literature, music and theatre.  He wrote lyrics for iconic film songs, the most famous ones being ‘Velga Nadu Velga Nadu’ (from th e film Kanchi Thalaivan, 1963) and ‘Kaagidha Odam Kadal Alai Mele Povadhu Pole’ (Marakka Mudiyuma, 1966). He was a screenwriter for more than 75 films including Parasakthi (1952), Manohara (1952), Malaikallan (1954)  Kanchi Thalaivan (1963) and Poompuhar (1964).

A man possessed of enormous  oratorical skill, his style of speaking was mimicked by the youth in the 1960s and ’70s. His influence was such that young men of that era even started to dress like him and wear dark sunglasses. Karunanidhi was also a prolific writer, with dozens of books to his name. His memoirs, Nenjukku Neethi (‘Justice to the Heart’) runs into six volumes. In 2010 he also organised the World Classical Tamil Conference in Coimbatore.

One of his greatest contributions both towards Tamil language and politics – following from his political mentor Annadurai – was the establishment of a political discourse heavily invested with symbolism and rhetoric, a politics of ‘commemorative symbolism,’ which includes eulogy and oratory, monuments, relics, statues, paintings, and ritual observances. Commemoration was central to the DMK’s political discourse – the world of epics, politics and cinema merged together and ancient literary sources became part of everyday political references. Indeed, this became the quintessential feature of Tamil politics cutting across party lines and Karunanidhi was the chief patron and practitioner of such politics. No political trend in Tamil Nadu – including the Left, Right and Dalit – has been left unaffected by such forms of political practice. 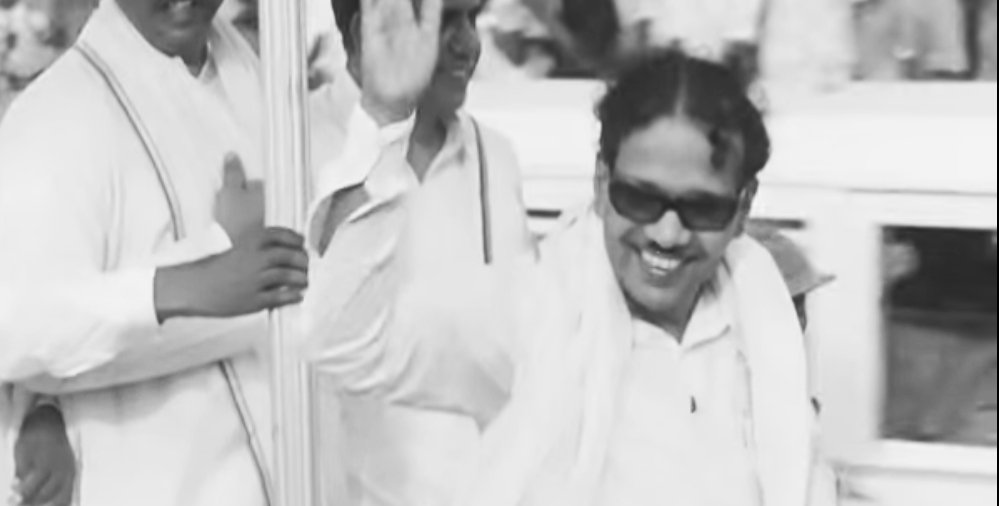 During its first, decade-long stint in power (1967-76), the DMK changed the Tamil landscape with its visible iconography, which ranged from street names to erecting statues for literary icons. Dravidian aesthetics, especially its propaganda culture, has gradually become the norm in pan-Indian politics with posters, cutouts and flexboards. This investment in the visual and aural economy gave the DMK a hegemonic presence in Tamil Nadu politics.

In continuation with DMK’s investment in symbols, Karunanidhi built the Valluvar Kottam in honour of the Tamil poet Thiruvalluvar but owing to his defeat in the 1977 elections, he was not able to inaugurate it. He swore he would step in to Valluvar Kottam only as a chief minister and after more than a decade serving as the principal opposition leader, fulfilled his vow by holding his swearing in ceremony there in 1989. In yet another act of symbolic investment, Karunanidhi in 2010 unveiled a 133-foot high statue of Thrivalluvar in Kanyakumari at the point where the Indian Ocean, the Arabian Sea and the Bay of Bengal converge. As with the ‘Dravidian’ form of political campaigning, the strategic deployment of larger than life statuary has since been emulated in states like Uttar Pradesh, Maharashtra and Gujarat.

In the short space of two years, Tamil Nadu has lost two of its most singularly important political personalities and the two parties, AIADMK and DMK, which have dominated Tamil politics for more than half a century, their supreme leaders. Jayalalithaa’s death and Karunanidhi’s deteriorating ill-health and eventual demise have created a significant political vacuum in the state. Party ideology has long been relegated to a secondary role. The demise of these two leaders also signifies the impeding crisis of the Dravidian style of politics, which is now under siege by newly emergent actors such as Rajnikanth and Kamal Hassan who are trying to usher in a post-Dravidian style of politics.