The Odds Are Stacked Against H.D. Kumaraswamy in Karnataka

The BJP appears ready to strike its final blow against the coalition government. 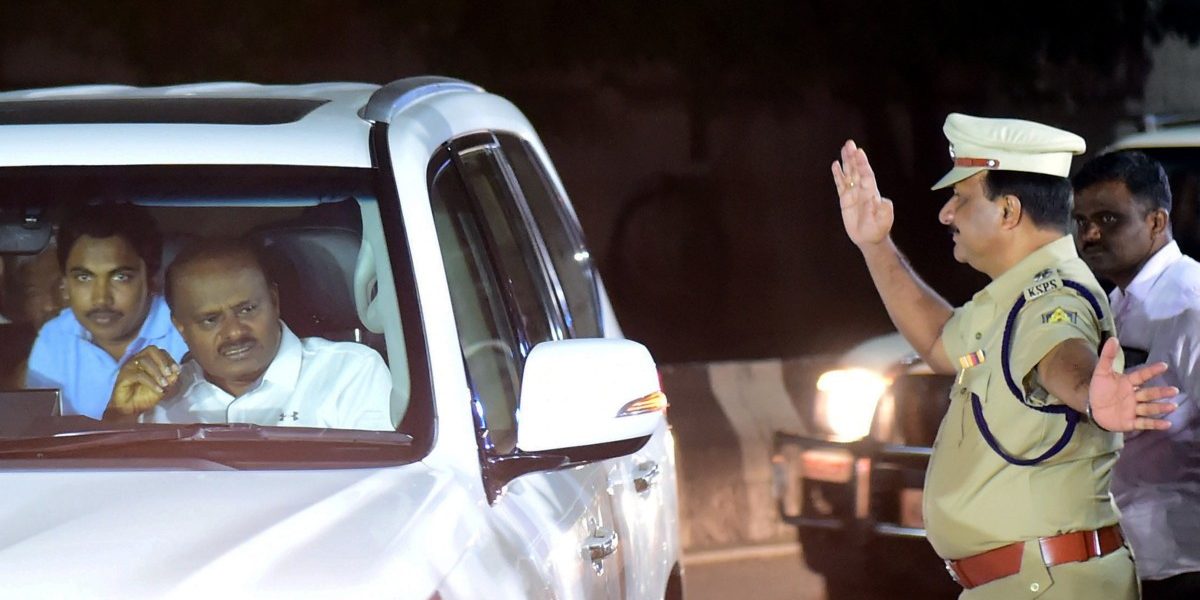 Karnataka chief minister on in Bangalore on Sunday, after he returned from a personal trip abroad. Image: PTI

It seems like this is the end of the road for H.D. Kumaraswamy in his second stint as chief minister of Karnataka. In fact, it was only a matter of time before the Congress-Janata Dal (Secular) coalition unravelled, especially after its disastrous performance in the Lok Sabha polls (the Bharatiya Janata Party won 25 of the 28 seats in the state).

The entire state cabinet resigned on Monday to allow the chief minster space to accommodate rebel leaders and disgruntled MLAs in a new cabinet. But this move is unlikely to save the day for the chief minister, who braces for the beginning of the state assembly session on July 12.

The present crisis started off after 13 MLAs, both from the JD(S) and Congress, submitted their resignations to the speaker of the house and withdrew support for the chief minister. Several of these MLAs have been mulling the idea of an open rebellion over the last many months and have been in touch with the BJP.

Their decision is certainly one taken after careful calculation, consultations after the BJP’s tremendous victory in the Lok Sabha polls and the return of Narendra Modi as prime minister.

While the BJP had made several attempts to topple the state government before the Lok Sabha polls and is waiting to deliver a decisive blow, this latest crisis seems to largely be the result of internal rebellion and power struggles in the Congress and JD(S).

The resignation of 13 MLAs and the fact that one independent MLA has shifted support to the BJP effectively brings the combined strength of the JD(S)-Congress, including one independent, to 105 in the 224-member house. The BJP, on its own, has 105 MLAs and with one independent would have 106 MLAs. Apart from this, there is one BSP MLA who won with the support of the JD(S).

In effect, when the number in the house is down to 211, the BJP, with one independent, will have a simple majority. However, there are a few more resignations from Congress members that seem to be on the anvil, and that would bring the numbers in the house down to a level where the BJP would be comfortably ahead.

It is irrelevant whether the speaker accepts the resignations of these MLAs or not. All that matters is if these members will vote against or abstain from a confidence vote. Most of the MLAs who have resigned have publicly declared that they will support anyone but Kumaraswamy for chief minister. The focus seems to be on toppling the present government.

A section of senior political leaders in Karnataka suggest that Congress leader Siddaramaiah could have played his part in bolstering the crisis and tacitly supported the resignations of the MLAs in a hope to wrest the chief minster’s chair. That Siddaramaiah has been unhappy with Kumaraswamy in the chief minister’s post is an open secret, and Deve Gowda had even publicly declared on Sunday that there is no question of the JD(S) supporting Siddaramaiah for chief ministership.

Also read: Karnataka’s Quandary: To Believe or Not to Believe

In many ways, the Deve Gowda-Siddaramaiah personal rivalry has been the weakest link in the JD(S)-Congress coalition, and it is that fault line that seems to have opened up.

While there was a section in the BJP which wanted a new face as its chief ministerial choice, the party now seems clear that it will go with B.S. Yeddyurappa as chief minster if it gets the numbers to form a government.