The History, Dilemmas and Dangers of Karnataka’s Flag Debate

The fault lines of the flag debate lie in the imperfections of Karnataka’s cultural and emotional integration. By dialling back, the Congress is avoiding a self-goal. 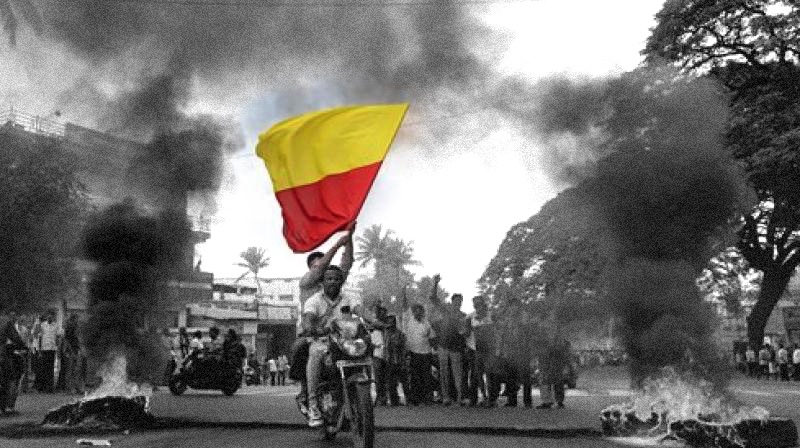 The question of creating a separate flag for Karnataka – which the Congress raised, thereby sparking a somewhat  tempestuous debate last week – will, it appears, be locked away for now. Apparently, chief minister Siddaramaiah has been advised by the Congress high command to ‘exercise restraint’ in triggering a ‘sensitive’ and ‘emotive’ issue in an election year. That is, undoubtedly, wise counsel. Karnataka goes to polls in April-May 2018.

The Congress leadership in Delhi seems to have figured out that if the BJP decides to build a bigger nationalistic narrative before the assembly polls by whetting its own appetite for demagoguery, then the Congress would not only be made to look seditious with the flag issue, but the voter will be pushed to make a choice between the national and the sub-national. In the cultural milieu that currently exists, it is a no-brainer as to which one would triumph. It is besides the point that the Congress does not possess the armoury, or the skill, to steer virulent debates, and would likely end up jeopardising its electoral prospects in the only state where it has a reasonable chance of returning to power.

The history of the debate

But why was this flag debate engineered in the first place? There are many surmises, but the one that emerges strongly is that whipping up regional pride was some kind of a ‘Chanakyan counter’ to the Hindutva debate that was threatening to engulf the state.

Violence has been periodically breaking out in the vicinity of Mangalore (Dakshina Kannada district) and in the first week of July, an RSS worker was killed in mob violence leading to a tense law and order situation. This had the chief minister worried because he holds the home portfolio as well. In fact, the coastal district, which now has the tag of being a ‘Hindutva laboratory’, has seen a sudden spurt of violence and killings in the last four months. According to one source, the region has witnessed 68 incidents of communal violence in the last two months alone.

Besides the Hindutva reason, the other thin layer of substantiation offered for the sudden thrusting of the flag debate into the public sphere is to assert regional autonomy in a federal polity like India. But to play up this angle is self-defeating for a party like the Congress, which prides itself as a national player.

There has also been an endeavour to construct victimhood around the ‘imposition’ of Hindi by the Union government. But in the absence of any real provocation in this regard, all activity around this will be perceived as lumpen behaviour that wears the garb of linguistic pride. Here, the only easy thing you can resort to is to paint signboards black to ‘reverse impose’ Kannada and demand exclusivity for the language in a cosmopolitan setting, as is happening with metro station boards. This again portends danger for a sitting government, because the violence associated with it alienates a large section of the population, besides hampering economic activity. If unchecked, this could lead to a law and order spiral, like those witnessed during the Cauvery riots.

The kind of chauvinistic forces that the flag debate could possibly unleash was illuminated in the crime section of a Kannada newspaper, ironically the same day the chief minister was reiterating that the Indian constitution didn’t really prevent a state from having a flag of its own. The police had arrested 11 members of a pro-Kannada outfit, including its president, in the JP Nagar area of Bangalore, for trying to extort Rs 5 lakh from a shoe retailer who was selling yellow sandals. Their argument was that yellow and red were ‘sacred’ shades in the existing Kannada flag and couldn’t be used on sandals. If the retailer wanted to stop the language activists from burning down his outlet, he had to make peace by coughing up money. If this is the situation with an unofficial flag, it isn’t hard to imagine the legitimacy such activity would derive with an officially-sanctioned flag. The ‘insider’ and ‘outsider’ distinctions would only sharpen, grow and create a Sena-style fear across the state. Lynchings will have a new purpose and the Congress’s ‘idea of India’ narrative would go into a tailspin.

It would be useful to also examine if the Kannada pride issue is an electoral clincher, as some in the establishment are making it out to be. Historically speaking, pro-Kannada outfits have never regained their deposit in an electoral contest. This was true even in the 1980s, when the language movement was at its peak and matinee idol Rajkumar was at its helm. For that matter, Karnataka has demonstrated distinct cultural behaviour when compared to the neighbouring states of Andhra Pradesh and Tamil Nadu. The reason for this lies in the linguistic geography of the state and the cultural and development politics that ensued after the re-organisation in 1956. It took nearly 20 years for the state to be renamed Karnataka from Mysore, and that should make explicit the tacit hegemony of one region over the rest within the state. The fault lines of the flag debate lie in the imperfections of the state’s cultural and emotional integration.

Of the 30 districts in Karnataka, only a handful of them – about five districts, in the old Mysore region – are predominantly Kannada. The rest of the state is either bilingual or trilingual. Kannada in these districts shares considerable space with say Tamil, Telugu, Malayalam, Marathi, Urdu/Daccani, Tulu, Byary, Kodava and Konkani. Even when it comes to dialects, the North Karnataka and costal Karnataka dialects of Kannada are distinct from the Mysore variety, which has come to symbolise the standard tongue. The developmental and power-sharing imbalances plaguing different regions of the state vis-à-vis the Mysore region have often led to vociferous demands for carving out separate states within the existing one. The demand for the Kodava state is the oldest. The Tulu speakers, who compare the antiquity of their language to that of Kannada, have from time to time spoken about Tulunadu. Their cultural alienation is palpable. The skewed distribution of resources has forced people in the North Karnataka region to agitate for an independent state. The districts in this region in the pre-1956 era were part of either the Mumbai presidency or the Nawab’s Hyderabad. Now, will a flag for the state dissolve all the differences that exist between these regions? Will the flag magically lead to an emotional unification, something that has escaped the state in the past 60 years?  Or is the linguistic state anachronistic, as we saw a few years ago in the case of Andhra Pradesh, where Telugu was no longer a binding force.

Finally, the colours of the existing unofficial Kannada flag, adapted in the 1960s to represent a political outfit called Kannada Paksha, has vermillion (red) and turmeric (yellow), which endears itself naturally to Hindutva iconography. The talk is that the colours could change in the official flag, but what colour could be less contentious in a communally charged environment? Red is ruled out, green is anathema and blue is outcast. In fact, one language activist, who was part of the team that conceived the red and yellow flag, has already spoken out to say the government should just adapt the existing one and not fiddle with the colours. If the Congress pursues the flag debate, it will only bleed as it tries to build a consensus around the colours.

The impatience that embeds any such culturally-exclusive project is not just visible among some die-hard activists in Karnataka, but also in sections of the government. One senior aide to the chief minister went to unprecedented lengths on social media to debunk the learned opinion of a former chief justice of the Supreme Court on the flag issue, which was published in a leading daily. Siddaramaiah is masking his interest in the issue by saying he has not approved the flag but has only constituted a committee to look into it. That is mischief and signal enough. If he was so keen to have a flag, why did he need four years and three months to take up this issue? Why didn’t he think of it when he was made the custodian of Kannada development in 1983 by the Ramakrishna Hegde government or when he was deputy chief minister twice? Surely this is a let down for people who thought this former socialist would never do anything to damage his well-earned reputation for gravitas in politics.

Sugata Srinivasaraju is co-founder and editorial director of The Good State and The State, two digital media startups.