Has Congress Been Delivered a Death Blow in Karnataka?

It is important to tell the Karnataka story through the prism of the Congress’ defeat, rather than the spectacular success of the BJP, because success has a flat, linear explanation. 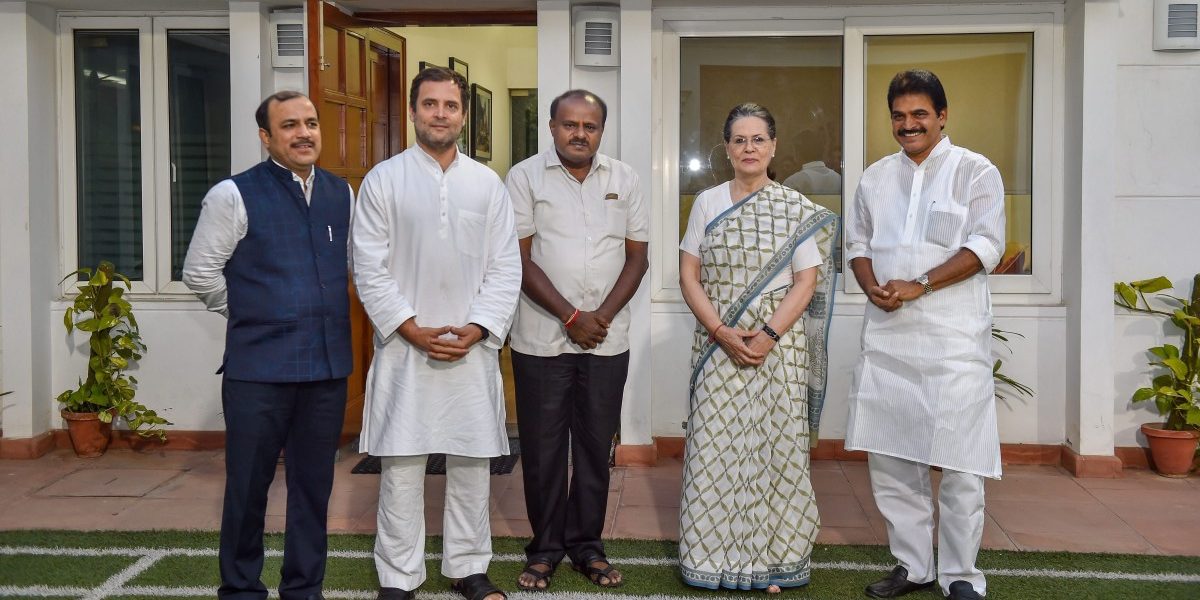 Bengaluru: Where does one begin to tell the Karnataka story? The story of a state that has at different bends in India’s electoral history resuscitated the Congress party, but has delivered a death blow on Thursday.

The worst ever parliamentary performance of the party in the state was in 1996, when it got five seats, and in 2009, when it got six seats. But this time, it has been reduced to one seat. Its alliance partner JD(S) has also managed to get one seat. They had shared seven and 21 seats between them, out of the total 28. This severe humiliation was not expected, although the alliance performance was predicted to be in single digits.

It is important to tell the Karnataka story through the prism of the Congress’ defeat, rather than the spectacular success of the BJP, because success has a flat, linear explanation. It is often boring. Defeat has layers of meaning, messages and outcomes.

If the magnitude and severity of the Congress’ loss has to register one has look at the margins of defeat: Mallikarjun Kharge, who has never lost an election in his life, has been defeated by nearly a lakh votes in Gulbarga; K.H. Muniyappa, former rail minister, who had remained undefeated for seven consecutive terms, has lost by over 2 lakh votes in Kolar; Veerappa Moily, who had bucked the 2014 trend to retain Chikkaballapur, has lost by over 1.8 lakh votes, and finally, H.D. Deve Gowda, the man who thought he may be his astrologer’s phoenix to take the prime minister’s chair again, has lost by over 12,000 votes. Siddaramaiah, the face of the campaign, and chief arbiter of ticket distribution, has not been able to save his backyard, Mysore, or his adopted home Bagalkot, where victory margins for the BJP are over 1.3 lakh and 1.6 lakh respectively. The careers of all these men are either over, or in jeopardy. 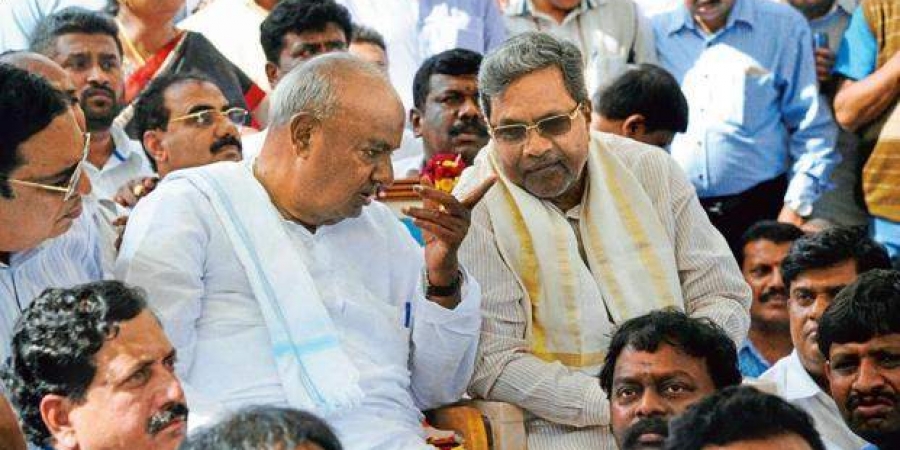 What is the reason for this severity of punishment from the voters? If one assumes it is Narendra Modi, like in the north of India, then that is only partially correct. Anyway, the BJP’s success in Karnataka pre-dates the Modi era, and it has been an intelligent blend of caste identity votes, and Hindutva aggression. This, besides periodic accrual of vote shares from the splintering of the Janata Parivar parties. Anyway, the more accurate description for the Congress’ situation would be captured in one word: hubris.

Right from day one, Siddaramaiah never allowed the alliance to generate positive optics. Instead of functioning with reasonable common sense and maturity of an elder, he behaved like a petty dissident, provoking his minions to relentlessly air slogans that irked H.D. Kumaraswamy, the alliance’s chief minister. He could never put to rest his assembly seat defeat in Chamundeshwari at the hands of the JD(S), and his running feud with the Gowda family. He tried to officially mask all of this though, but people saw through the game.

Also, the JD(S) members, and often an emotional Kumarswamy, were very vocal about the differences in the alliance. When they made clever, and not-so-clever statements against each other to score cheap points, they did not realise that their credibility would be dented, and there was Modi and the BJP waiting to exploit it all.

Also Read: Are We in for a Foundational Shift in India’s Nationalist Imaginary?

A hostile media added spice to the bickering between alliance partners, and vigorously created a BJP and Modi ecosystem. The irony is the Congress high command had dictated an alliance with the JD(S) in May 2018 with a singular purpose to keep the BJP out and garner additional numbers for the party in the Lok Sabha polls.

When the alliance partners came together a year ago, there was a problem of overlapping support bases in the old Mysore districts, but that was about guarding their individual identities as political entities. It did not threaten the express purpose of maximising victory in Lok Sabha polls, a clearly defined short-term goal. But, the self-interest of leaders on both sides mixed up the short-term and long-term goals.

Arithmetically speaking, even if the two parties did not create a special surge, the marriage of two vote shares should have easily delivered 14 seats to the alliance. If there was positive energy and optics, then there would have been two-three bonus seats. If there was an atmosphere against the BJP, the alliance could count three more. What was estimated to be a high of 19-20, and a low of 11, finally ended with two. 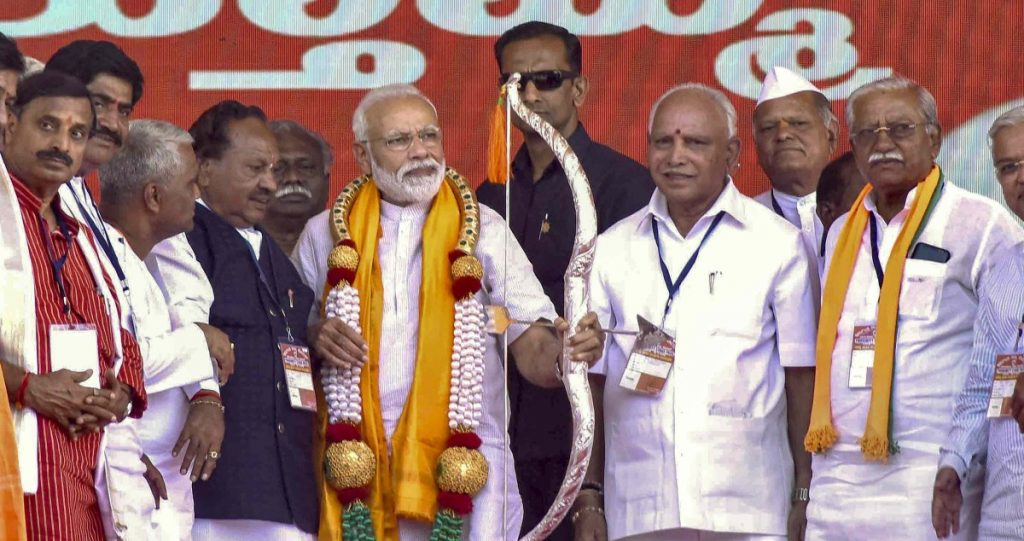 Prime Minister Narendra Modi holds up a bow and arrow as BJP chief B.S. Yeddyurappa and other leaders look on during a rally in Bagalkot. Credit: PTI

There was one other big reason for the defeat of the alliance – ticket distribution. The JD(S) lost momentum the moment it put two Gowda grandsons in the fray, and shifted the grandfather Gowda to Tumkur. The Tumkur move displaced a sitting Congress MP, who rebelled initially, but then settled to sulking. It appears the sulking was enough to defeat Deve Gowda.

Also, the JD(S) bit off more than what it could chew in the seat-sharing talks. They stuck to a number and demanded seats. In their greed, they picked seats like Uttara Kannada, Udupi-Chikmagalur, Bijapur, where the party’s presence was thin. In all the seats, the defeat has been stark. Especially in Uttara Kannada, where the controversial Ananth Kumar Hegde has won by a margin of over 4.7 lakh votes. Congress candidates in these seats would have performed better. In fact, the JD(S) did not have candidates in two constituencies and had to borrow Congress leaders.

Coming to the Congress part of the distribution, the indecisiveness and partisanship was obvious. For example, Siddaramaiah was hell bent on giving the Bangalore South ticket to an acolyte, who obviously did not fit the bill. Finally, B.K. Hariprasad parachuted into the constituency, and there was no time to plan or prepare.

The allocation of the Davangere seat was a mess, where the Shamanur Shivashankarappa family rejected the ticket, and a tame alternative had to be found in the last minute. Most Congress ticket decisions were about satisfying different factions inside the party. This has been its bane for a long time. The quota system the entrenched leaders have developed for themselves has stagnated the party’s vote share for decades, and has blocked entry of fresh talent. It is best not to discuss here aspects of dynastic perpetuation. That would call for a separate piece.

People who crossed over from the Congress and contested in Gulbarga and Bellary have won. What forced them to leave is an open secret. After this defeat, one wonders which region, and which caste, the Congress could consider loyal to it?

Also Read: Rahul Gandhi’s Big Failure Was to Not Promote Fresh Faces in the Congress

The BJP has made a substantial entry into the hitherto untrampled Vokkaliga territory by backing Sumalata, the actor-wife of deceased Congress leader Ambarish, who stood as an independent.

Other than the handsome result that the BJP has secured, there is one other inadvertent outcome of this result. It settles the supremacy of B.S. Yeddyurappa in the party for now. He has completed his term as party president, and there was a race heating up for the post. In fact, the race had split the party in the middle. Now, he’ll have a bigger say in the race. One cannot however make a similar prediction of he becoming chief minister again, because the Modi-Shah duo may have different plans.