After Karnataka, Has the BJP Lost Its Majority in the Lok Sabha?

While Yeddyurappa and Sreeramulu resigned as MPs to take oath in Karnataka, their names have re-appeared on the Lok Sabha website without an explanation. 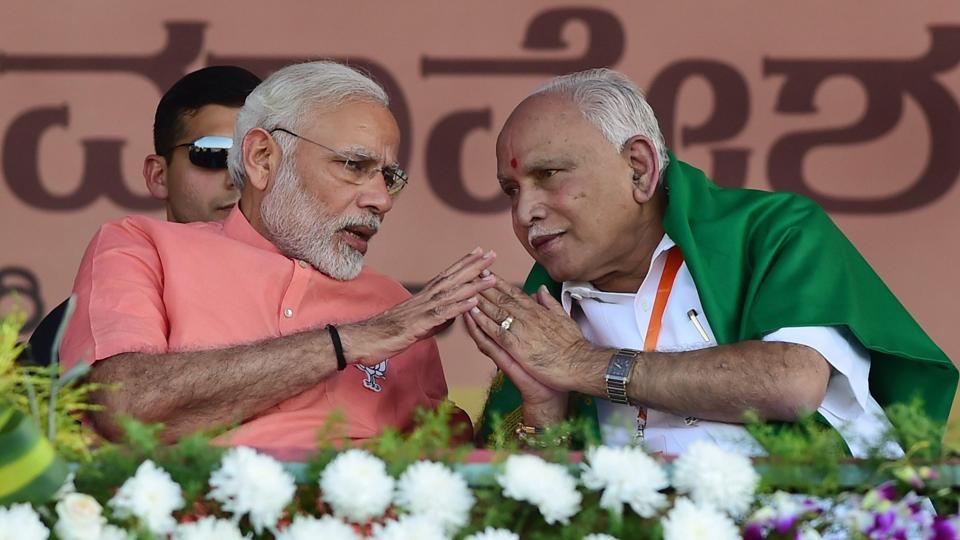 New Delhi: The fall of the two-day B.S. Yeddyurappa government in Karnataka may not be the only embarrassment that the Bharatiya Janata Party has had to face in the last few days. With two of its Lok Sabha members – Yeddyurappa himself and B. Sreeramulu – resigning to take oath as MLAs on May 19, the saffron party’s tally in the Lok Sabha may now be down to 271, from the 282 seats it won in the 2014 general elections. With its number one short of the halfway mark in the 543-elected member Lok Sabha, the BJP may no longer enjoy a majority on its own.

On May 19, hours before the floor test was to happen, both Yeddyurappa and Sreeramulu resigned from their respective positions as MPs and took oath as newly-elected MLAs. Yeddyurappa, who was earlier a parliamentarian from Shivamogga, took oath as legislator from the Sikharipura assembly constituency, while Sreeramulu, formerly MP from Ballari, joined the Karnataka Vidhan Soudha as an MLA from Molakalmuru.

Since the BJP already had only 273 members in the Lok Sabha – it lost six seats in by-elections and three seats fell vacant after MPs died mid-term – the loss of two seats pushes the party under the magic figure.

However, there is a twist. The Lok Sabha website until May 21 showed that there were seven vacant seats, which included Shivamogga and Ballari. But on Tuesday, it displayed that only five seats were vacant. Yeddyurappa and Sreeramulu were back on the list of serving MPs.

According to Article 101(2) of the constitution, no person shall be a member both of parliament and a state assembly at the same time. The person concerned gets 14 days to resign from one of these posts. With the resignation of Yeddyurappa and Sreeramulu on May 19, it was understood that their Lok Sabha seats fell vacant.

Experts say that the two can hold on to their MP positions despite giving their resignations only on one condition. “The person will cease to be an MP only when the speaker of Lok Sabha formally accepts their letters of resignations,” Subhash C. Kashyap, an expert in constitutional law and the Indian parliamentary system, told The Wire.

A senior journalist and expert on constitutional issues who did not want to be named confirmed this. He said once the resignation is accepted formally, the person ceases to hold that post. “However, in cases where the speaker has delayed accepting the resignation, the 14-day rule which gives the candidate the option of choosing one of two positions will apply.”

If the Lok Sabha website has listed Yeddyurappa and Sreeramulu as MPs again, it could well be possible that speaker Sumitra Mahajan may not have accepted their resignations formally, which indirectly gave the two BJP leaders the option of resuming their duties in the Lok Sabha again in case they fail the floor test.

However, no official clarification has come in this regard from the BJP leadership. Attempts to reach BJP spokespersons remained unsuccessful at the time of writing. Thus, a cloud of confusion prevails over whether Yeddyurappa and Sreeramulu are serving MPs or MLAs at moment.

Meanwhile, the issue has become a talking point on social media.

Earlier today when I checked LS website, it showed 7 Vacant seats including Yeddy & Sreeramulu from Karnataka.

Now it shows 5, BJP’s tally is back up to 274 and Yeddy & Sree are back in the Karnataka list of MPs. @LokSabhaSectt , what happened here? pic.twitter.com/mBt4r5TZJU

Two MPs resigned from the Lok Sabha to take oath as MLAs. AFTER taking oath but failing to prove their party’s majority in the house both are back as MPs as per the Lok Sabha website. What gives? https://t.co/ngMaRjv13a

Karnataka did one more thing yesterday that most people missed – BJP is now below the majority mark in Loksabha ?

Yeddyurappa and Sriramulu had to resign their Loksabha seats to take oath as MLAs.

Modi now doesn’t have the majority that Bhakts were so proud of ? pic.twitter.com/jUyDv1Lvmn

However, in case the resignations have been accepted by the speaker, both Yeddyurappa and Sreeramulu will have to serve their respective assembly constituencies. While with the support of allies, the National Democratic Alliance government has a comfortable majority, BJP’s own tally falling below the halfway mark may reduce its bargaining power with partners.

In that case, its tally of 271 also hangs in a delicate balance as the BJP has suspended one of its MPs from Bihar, Kirti Azad. Another MP from the same state, Shatrughan Sinha, has been openly rebelling against the Narendra Modi government.

One of its primary allies, the Shiv Sena with 18 MPs, has been threatening to pull out of the government and has already declared that it will fight the 2019 general elections on its own. At the same time, BJP’s ally in Jammu and Kashmir, the People’s Democratic Party, also lost its Srinagar seat to the National Conference. One Meghalaya seat, which was earlier occupied by Meghalaya chief minister Conrad Sangma, will also fall vacant after his resignation.

Four Lok Sabha seats are going to the polls on May 28. Two of these seats are in Maharashtra: Bhandara-Gondia, where BJP MP Nana Patole resigned, and Palghar, where BJP’s C. Wanga died. In Kairana, which fell vacant after the death of BJP’s Hukum Singh, the saffron party is facing a stiff fight from a united opposition comprising the Bahujan Samaj Party, Samajwadi Party and Rashtriya Lok Dal. The fourth by-poll is in Nagaland, from where chief minister Neiphiu Rio had resigned. Here, a BJP ally is fighting a tough election.

The BJP’s record in the by-polls has taken a hit in recent months. While it retained its seats in Gujarat’s Vadodara, Madhya Pradesh’s Shahdol and and Assam’s Lakhimpur, it lost its seats Gorakhpur and Phulpur in Uttar Pradesh, Beed in MP, Gurdaspur in Punjab, and Alwar and Ajmer in Rajasthan.

The May 28 by-polls will be held against the backdrop of the saffron party facing significant reverses in Karnataka. It will be important for the party to win these seats to remain in the majority on its own and hold its stature among its allies.

The Lok Sabha bulletin confirmed that the speaker has accepted the resignations of both Yeddyurappa and Sreeramulu. Which means that they will no longer be member of parliament and lays rest to the confusion that prevailed over the last few days over their official statuses.

It is, however, unclear why the Lok Sabha website after removing their names from the list of MPs decided to put them back. Thus, seven Lok Sabha seats are vacant as of today. However, if put in a situation to prove its majority, the BJP may pull through even without the support of its allies as the Lok Sabha strength has been reduced to 538 (536 elected members and two Anglo-Indian nominated members). The BJP will need only 269 members (excluding the speaker) in its support to prove its majority.

In such circumstances, the by-polls to be held on 28 May gains further significance as further losses may put the saffron party in an unexpectedly discomforting situation. 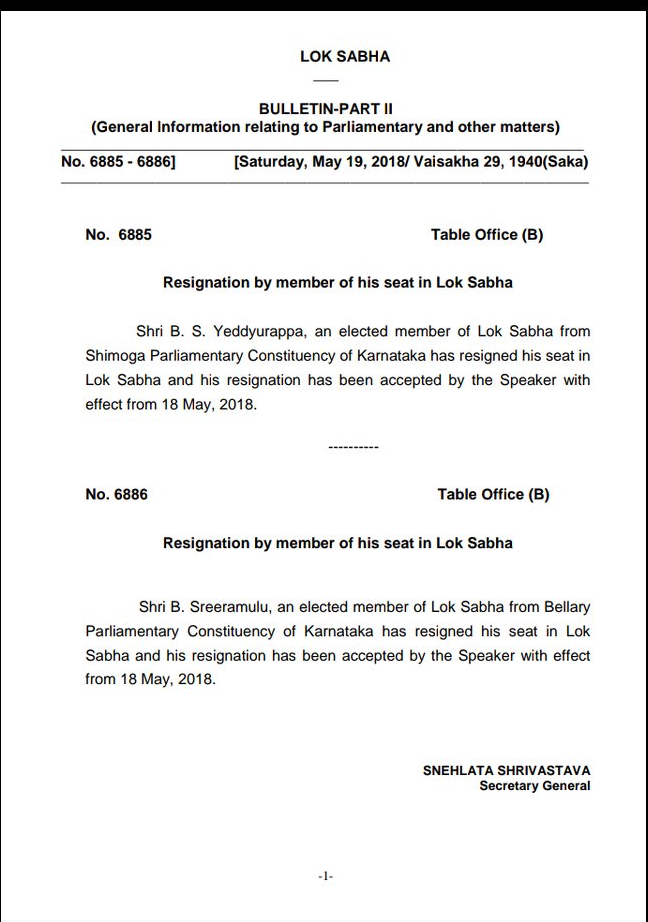