Nearly two months after the Kumbh Mela ended, tannery owners are still waiting for the go ahead to reopen. 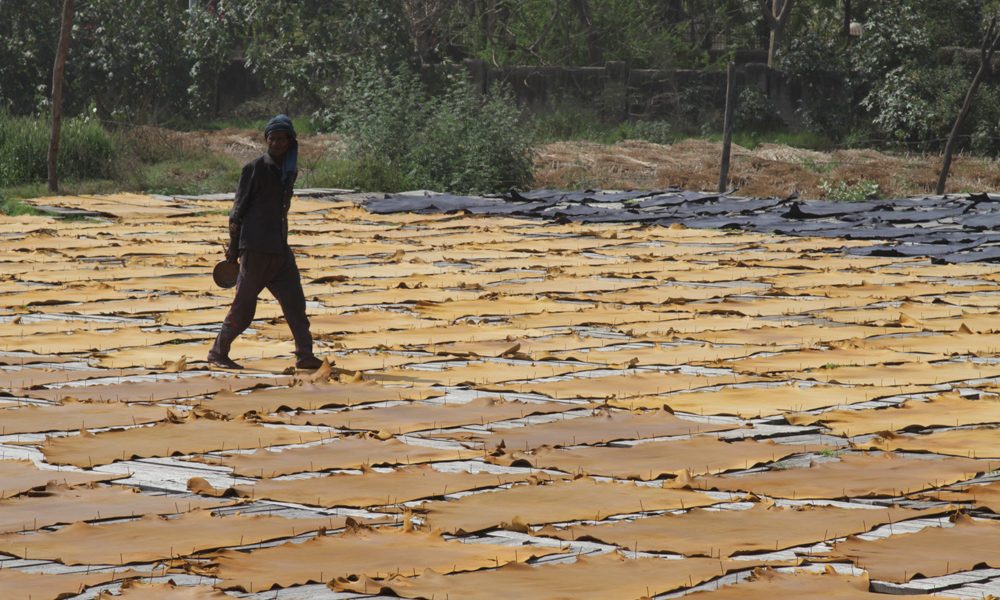 Kanpur (Uttar Pradesh): In Kanpur’s Jajmau cluster, 225 tanneries are still closed, even though the Maha Kumbh Mela ended on March 4. While the discharge created by the tanneries is being cited as the official reason, tannery owners say the state’s urban development and environment ministries, as well as the chief minister’s office, are playing a game of passing-the-file.

Since November 15 last year, all except 26 of the 251 tanneries were ordered shut in phases as chief minister Adityanath said that no sewage or industrial effluent should flow untreated into the Ganga. This was to ensure that pilgrims could have a cleaner dip lower down at the Allahabad confluence for the duration of the Kumbh.

It will soon be two months since the Kumbh ended. Tannery owners don’t know why the plants are still shut, or when they can re-open. Vijay Vishwas Pant, Kanpur’s district magistrate, advised The Wire to “talk to Lucknow,” where the state government is headquartered. He added that his administration has a made a recommendation, but wouldn’t disclose what it was. Earlier, in March, he had said the district administration had advised the state government to allow the tanneries to operate.

A senior Uttar Pradesh State Pollution Control Board official who was overseeing the Kanpur stretch of the Ganga, and requested anonymity, said the tanneries were never polluting the Ganga. The district administration was not in favour of an indefinite closure, which is why it had closed the tanneries down in phases after the Uttar Pradesh Jal Nigam raised “false alarms thrice” about the discharge effluents being more than the sanctioned amount.

A committee comprising officials of the pollution control board, the district administration and the Jal Nigam found no evidence of violation by the tanneries, he said. This was conveyed to the state’s urban development ministry, but the Jal Nigam, which the ministry oversees, is “covering up its inefficiency” by forcing the tanneries to back down. 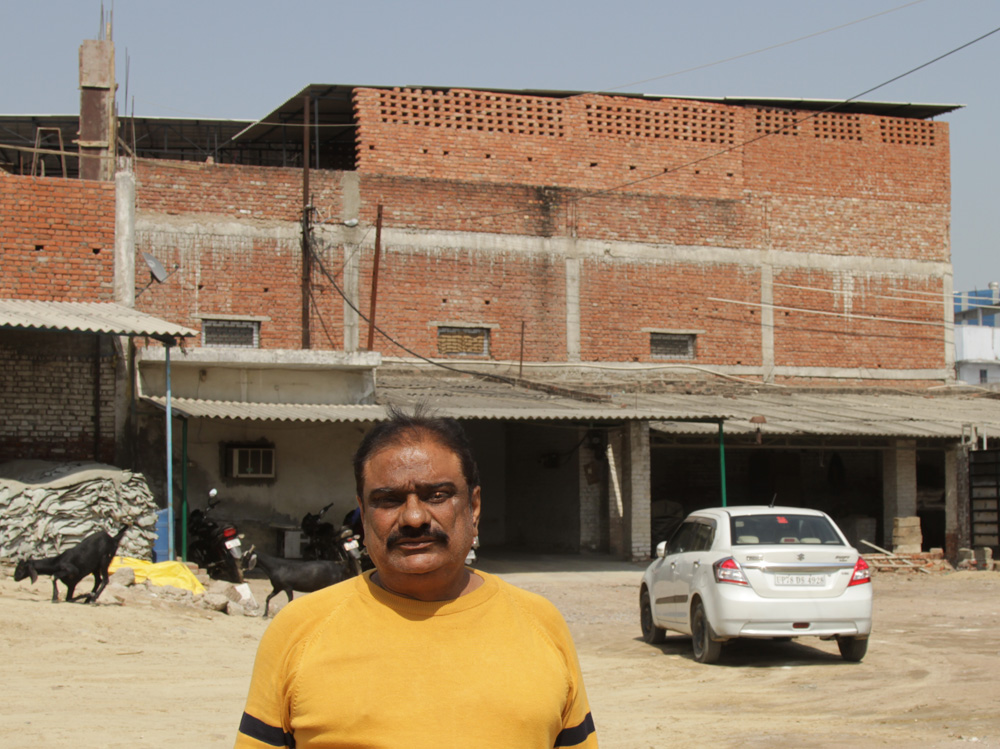 Feroz Alam outside his factory.

Our self-confidence has been broken,” says Feroz Alam of Merit Leather Finishers and an executive committee member of the cluster’s Small Tanners Association (STA). “We either have to take to the streets or kill ourselves.”

Jajmau is a British-era cluster. According to Alam, the first unit came up in 1905. More units sprang up over a period of time to process hide from cows (till cow slaughter was banned after independence) and buffaloes. Uttar Pradesh has the highest bovine population in the country. According to the 2012 Livestock Census, its share was 17% of the two species combined and 33% of India’s buffaloes. As new entrants set up units and family businesses expanded and split, Jajmau became a 12 square km dusty sprawl of faceless and nameless sheds that processed hide and discharged effluent into the Ganga.

“The effluent that is discharged (from the treatment plant) meets the norms,” said Javed Iqbal, regional chairman of the Council for Leather Exports. “In Jajmau, the treated effluent is discharged into an irrigation channel.” 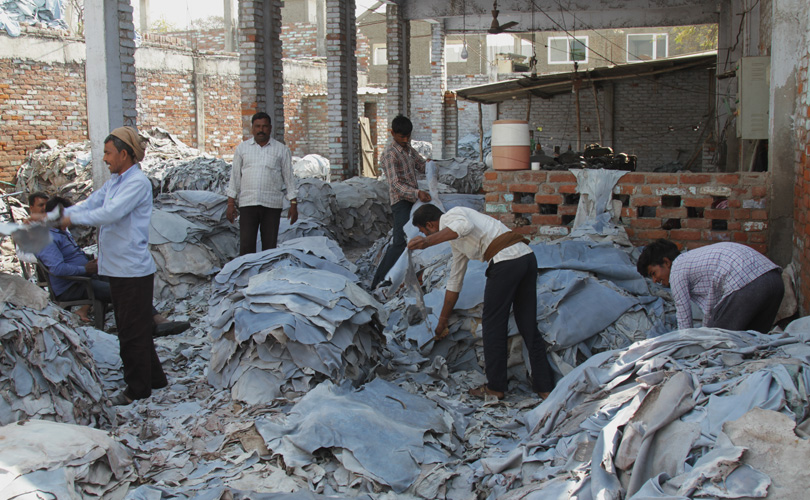 During previous Kumbh melas, the tanneries would voluntarily close down their units three days before each of the six shahi snans (bathing ceremonies), as that is the time it takes for river water to travel from Kanpur to Allahabad, says Taj Alam, managing director of Kings International, an exporter of leather goods based in Unnao, about 20 km from Jajmau. He says the Jajmau units’ representation to the state government that long closure would disrupt their businesses was treated with indifference.

The cluster’s common effluent treatment plant (CETP) became operational in 1992. It has a capacity of 36 million litres per day (MLD) of which nine MLD was estimated to be tannery waste. Though the number of tanning units has increased since then, the number of hides processed has remained the same, the pollution control board official said. The remaining 27 MLD is sewage from homes and tanning units. The treated sewage and effluents from the CETP are mixed and sent via an irrigation channel to the fields adjoining the tannery cluster.

The tanneries paid Rs 4 crore or 17.5% of the Rs 21 crore project cost to set up the treatment plant. They pay half the running cost, though they supply a third of the inflow, as tannery effluents are more polluted.

The UP Jal Nigam operates the CETP (though the diligence and efficiency is debatable). Being 25 years old, it is in need of an upgrade. Kanpur has 21 drains that carry sewage. The biggest, with a load of 130 MLD, is the Sismau drain. “It is the highest nuisance maker,” says the pollution control official. 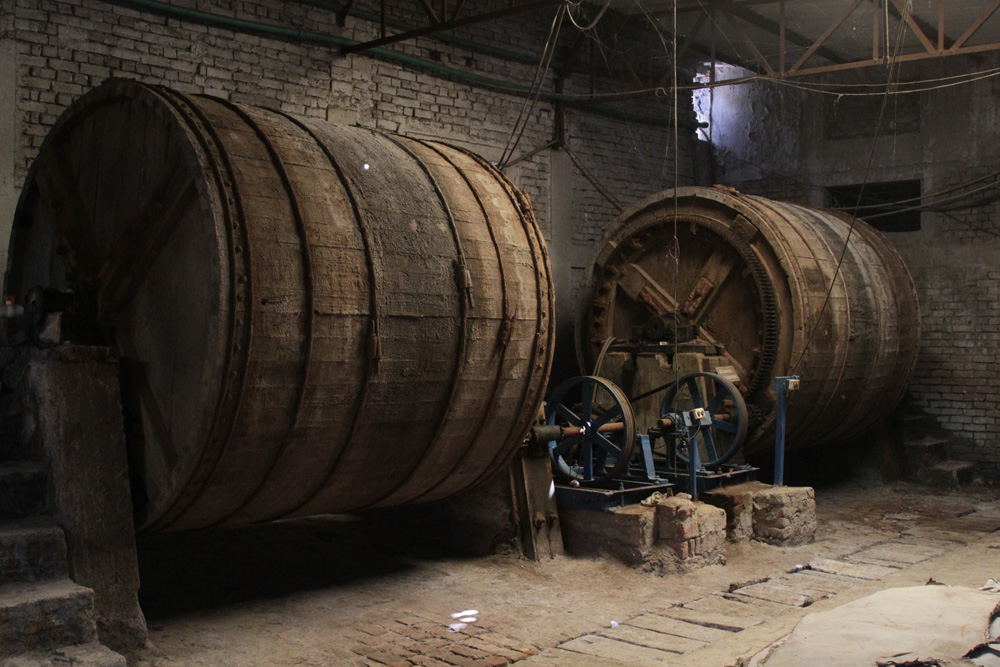 After the chief minister’s directive, the dumping of sewage from the drains to the Ganga has been stopped to a large extent – but not completely. New sewage treatment plants (STPs) have been set up, but their capacity is not enough to process all the domestic waste water that is generated. Some of the drains have been connected to the STPs, but others are yet to be connected. The CETP has been commandeered to process more sewage than before. The tanneries have had to yield to make space.

The CETP’s pumps were not working to full capacity. With funds provided by the state government, new pumps have been installed at the four stations. The Central government has approved a second effluent treatment plant for use only by the tanneries at a cost of a little over Rs 500 crore.  It is meant to treat 18 MLD of tannery waste and 2 MLD of sewage that is generated by them. The Jajmau Tannery Effluent Treatment Association will operate it as a non-profit company. It is expected to be operational in two years. The current effluent treatment plant will process only municipal sewage.

“Rest assured, the tanneries will not be allowed to re-open, at least not before the elections,” says a retired senior Indian Administrative Officer who belongs to another state cadre. He hails from Kanpur but doesn’t live there. By forcing the tanneries to shift out, the “cow credentials” of the chief minister will be boosted, he says. The loss of jobs is a “bonus”, because it will largely be for those who are unlikely to vote for the ruling Bharatiya Janata Party.

The tannery owners believe they are being targeted as their community is not the ruling party’s support base at the Centre or in the state. Soon after taking over as chief minister, Adityanath ordered the closure of slaughterhouses on the grounds of cruelty to animals and a violation of pollution control norms. All the slaughterhouses supplying meat to the domestic market are owned by municipal corporations. It’s the government’s responsibility to set up modern, hygienic abattoirs and ensure they do not pollute; instead the community of butchers was punished. Meat shops were also forced to spruce up under the threat of losing their licenses. An equalisation tank at the common effluent treatment plant, Jajmau.

The pollution control board official denies there is a political angle to the business closures. It will not fetch votes for the ruling party, he says. The district and the state are losing revenue, he adds. But a lawyer this correspondent met in Kanpur’s Company Bagh park said the closure of tanneries would rid the Ganga of pollution and check the city’s real estate prices, which were boosted by tannery profits. He might be articulating the feelings of a section of Kanpur’s population. How wide and influential that section is, one cannot say.

Conspiracy theories are also floating. A tannery owner saw the closure as a plot to force them out of Jajmau, as relocation would bring pecuniary gains for politicians and bureaucrats. Such theories gain credence in an atmosphere of mistrust and hate; the chief minister has already asked the state’s voters to choose between ‘Ali’ and ‘Bajrang Bali.

Despite closing the tanneries, the Ganga continues to be polluted. In March, its total coliform organism count was 31,000 per 100 ml. Of this, the faecal coliform count was 22,000. The safe limit for bathing is 500 or less.

All images by Vivian Fernandes.

Vivian Fernandes is the editor of smartindianagriculture.in.