Rumours are already afloat that Scindia may join the BJP along with his MLAs or topple Kamal Nath government with the the support of BJP MLAs. 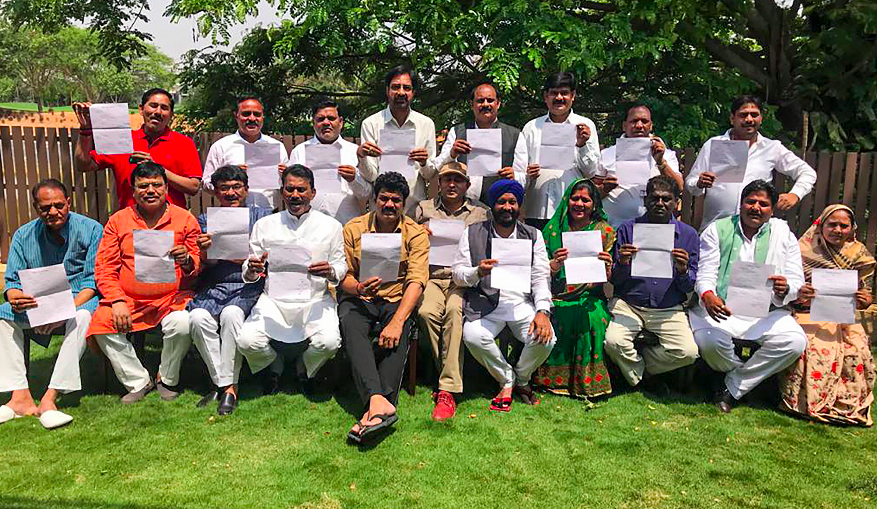 The Congress MLAs hold up their resignations in Bengaluru. Photo: Twitter

New Delhi: Just days after the Congress rescued six MLAs from a Gurgaon hotel to avert the Kamal Nath-led government from being toppled in Madhya Pradesh, the party faces a serious crisis in the state. On Monday night, disgruntled Congress leader Jyotiraditya Scindia met Prime Minister Narendra Modi and home minister Amit Shah and tendered his resignation to the Congress.

Soon after, 19 Congress MLAs including six state ministers from Madhya Pradesh who are in Bengaluru and have asked for police protection, tendered their resignation from the assembly. Three more MLAs resigned in Madhya Pradesh itself.

State Congress spokesperson Pankaj Chaturvedi, a close confidant of Scindia, resigned from the party’s primary membership soon after Scindia announced that he was quitting the party.

Sources close to Scindia told The Wire that Shah said Scindia would not be given chief ministership in the state, but could be given a spot in the Central government if he joins the BJP. Speculation is also rife that the leader may be joining the BJP today, with reports saying he went to the prime minister’s residence at 10:30 am on Tuesday. Shah has also arrived at Modi’s residence.

At 12:10 pm, Scindia tweeted his resignation from the Congress party, sent to Sonia Gandhi.

At least half of the MLAs flown to Bengaluru are loyalists of Scindia, while the other half could change sides according to how the situation unfolds, say sources.

Scindia, once considered quite close to former party president Rahul Gandhi, has been sidelined ever since Sonia Gandhi took over as interim president. According to the Times of India, the BJP is meeting in Bhopal on Tuesday, and may elect Shivraj Singh Chouhan as the legislature party chief in place of Gopal Bhargava.

NDTV reported that Scindia is currently in the national capital where the Congress central leadership is “desperately trying to negotiate a compromise but a solution seems increasingly unlikely”.

Sources claimed that Scindia is bargaining for his loyalists to be nominated for the upcoming Rajya Sabha elections and the Pradesh Congress Committee’s chief position, which chief minister Kamal Nath holds currently.

That Scindia, who is reported to have engineered the crisis, flew out the MLAs at a time when the party is still recovering from the Gurgaon episode reflects that the Gwalior royal family scion may not be merely flexing his muscles.

Also read: The Game Is Afoot in Madhya Pradesh as Scindia Whisks Away MLAs to Bangalore

Rumours are already afloat that he may join the BJP along with his MLAs or topple Kamal Nath government with the the support of BJP MLAs. He is also said to be negotiating with the BJP to support a third front government led by him.

Meanwhile, ANI reported that all cabinet ministers resigned at the meeting called by the chief minister today. The resignations have been reportedly accepted.

All cabinet ministers present in the meeting with #MadhyaPradesh CM Kamal Nath have tendered resignation; all resignations accepted. pic.twitter.com/NOmCz5BAHo

The chief minister is expected to reconstitute the cabinet soon. Kamal Nath released a statement where he said he won’t let forces “which are creating instability with mafia’s help” succeed.

The Wire on Monday evening had reported in detail about the machinations of Congress’ turf war in Madhya Pradesh, and who the rebel MLAs are.

Kamal Nath’s government, ever since its formation, had been teetering on the edge. It has the support of 120 MLAs – just four over the majority mark of 116 in the 230-member assembly. The Congress itself has 114 MLAs, but its government currently has the support of two legislators from the Bahujan Samaj Party, one Samajwadi Party and four independents.

The BJP, on the other hand, is not far behind with 107 MLAs. Two seats are currently vacant. If Scindia pulls off the coup, Congress will lose its second state after Karnataka.

Scindia, who lost the parliamentary election from his home constituency Guna, has previously flexed his muscles a few times. Ever since the Kamal Nath-Digvijaya Singh duo outsmarted him to assume power – both in the Madhya Pradesh government and in the state Congress unit – he has been resentful. His bid for the chief minster’s chair was also rejected by the Congress central leadership soon after the assembly polls. At the time, then president Rahul Gandhi had pacified him by giving him the charge of Uttar Pradesh along with Priyanka Gandhi.

Despite his significant contribution to the Congress win, more MLAs preferred Kamal Nath as the chief minister. Scindia had the support of only 23 MLAs. He then set his eyes on the Pradesh Congress Chief position. But Kamal Nath did not give the seat up and continued to lead the state unit.

Since then, Scindia has publicly differed from the party’s official position multiple times, the most important being when he supported the Narendra Modi government’s decision to read down Article 370. He said he supported “full integration” of Jammu and Kashmir into the Union of India.

His loyalists have been openly revolting against Digvijaya Singh, who is said to be controlling most political affairs for the party in Madhya Pradesh. Last year, Umesh Singhar, a state minister close to Scindia, accused Singh of interfering in government matters and establishing himself as a power centre. Scindia had then openly backed the minister and demanded that the party’s high command should look into his complaints.

Singh has emerged as Scindia’s bête noire in the last one and a half years the Congress has been in power.

In November, he dropped a bigger hint to the public about his resentment, when he changed his Twitter bio to remove his association with the Congress party, preferring to call himself a”public servant and cricket enthusiast”.

Kamal Nath also held emergency meetings with Singh and his chief secretary S.R. Mohanty. Scindia’s decision to fly out his loyalist MLAs came after the chief minister had scheduled a Congress legislature party meeting in Bhopal tomorrow at noon. Nath called the meeting on Monday morning after he met party president Sonia Gandhi in New Delhi to discuss plans for cabinet expansion and Rajya Sabha elections.

Also read: Challenging Pragya Thakur: I Did What Digvijay Singh Should Have, But Didn’t

The crisis in a way reflects the stark ineptitude of the Congress central leadership to keep its flock together. Similar wars between factions in the party have also been seen in Karnataka, Maharashtra and Rajasthan. There is already divided opinion among senior Congress leaders whether a new president should be elected or chosen.

The party has been pushed into a leadership crisis since Rahul Gandhi resigned after a humiliating loss in the 2019 parliamentary elections. Senior leaders like Shashi Tharoor and Manish Tewari have already stated that the party should elect a new president.

As senior journalist Vinod Sharma wrote on his Facebook page, “If the Kamal Nath government in Madhya Pradesh falls, it’ll be a telling comment on not just the arrogance of the Chief Minister. It’ll be a statement as much on the ineptness – or the increasing irrelevance – of the Congress High Command… The High Command should reflect how things have come to such a pass. In better times, memberships of RS and appointments to the PCC were the exclusive preserve of the central leadership. The party wheel has come unhinged as the pivot (that’s the High Command) has either gone missing or has lost its writ to competing interests.”

He said that Nath, too, had recently “dared Jyotiraditya Scindia to hit the streets if he so desired”.

“The CM was neither willing to accept his demand for a seat in the Rajya Sabha nor see him take over as the PCC president. He perhaps thought that the goodwill of Scindia’s bête noire, Digvijay Singh was enough to ensure the longevity of his regime,” he said.

(This is a developing story. It will be updated when more details emerge.)