Here's What Jyotiraditya Scindia Said While Joining the BJP

The former Congress leader heaped praise on Prime Minister Narendra Modi, described him as futuristic and a top-class administrator. 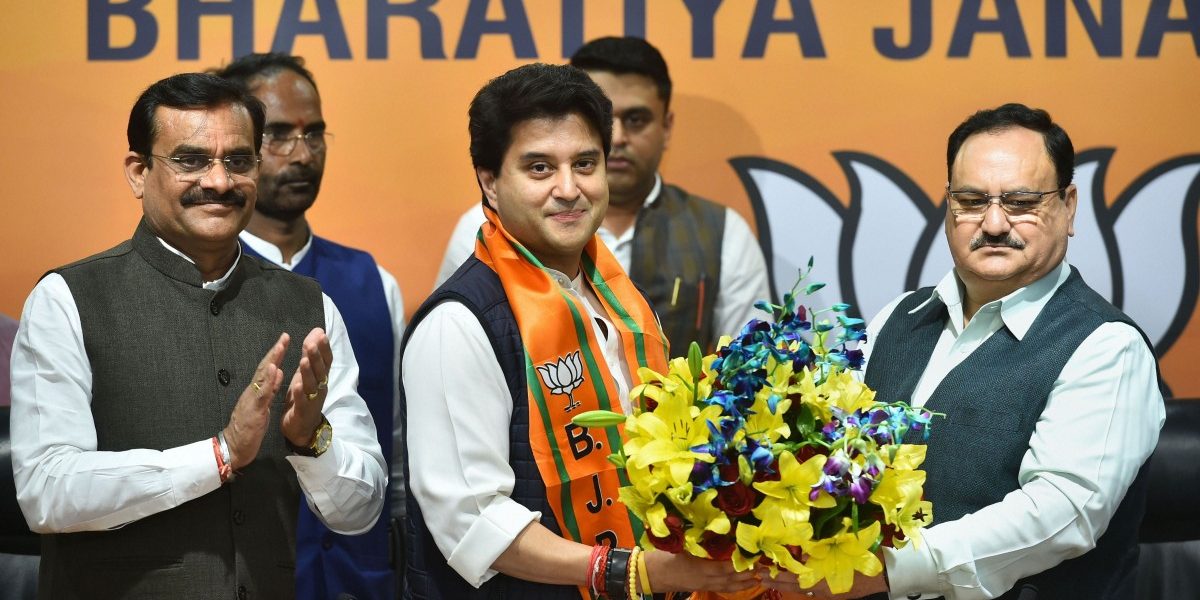 New Delhi: Senior Congress leader Jyotiraditya Scindia formally joined the Bharatiya Janata Party on Wednesday afternoon, a day after he quit his 18-year membership of the Congress party. His resignation, and that of 20 Scindia-loyalist MLAs, from the Congress is likely to throw the Kamal Nath-led Madhya Pradesh government into a major crisis.

“There are two most significant dates in my life. First, September 30, 2001 when I lost my father (Madhavrao Scindia). And then March 10, 2020 when on his 75th birth anniversary, I took a decision that will start a new phase of my life,” Scindia said, while thanking BJP party president J.P. Nadda, Prime Minister Narendra Modi and home minister Amit Shah for welcoming him into the BJP family.

He added that he had entered political life only to serve the people of India, and that “politics was only a vehicle to achieve that goal”.

“I am sad that a situation has come where I think that the Congress party is no more the same as it used to be. I can say with great faith that my goal to serve people was no more possible by remaining with that party,” he said.

He accused the grand-old party of constantly denying “reality” and disrespecting “new leaderships”.

He went on to mount a series of attacks on the Kamal Nath-led government in Madhya Pradesh.

“When in 2018, a new government was elected in my state, we had all imagined building it into a model state. But after 18 months, all those goals have been completely scattered.”

He said that the Congress promised to waive farmers’ loans in 10 days but that is yet to happen. He added that farmers who were falsely accused in the Mandsaur firing were still languishing in prison, even as there are no new opportunities for employment.

“Instead, corruption has got many more opportunities. Illegal sand mafia and transfer businesses are flourishing in the state now.”

He said that there has never been an occasion when a Union government was elected with such big mandates for two consecutive times. He described the prime minister as futuristic and a top-class administrator. “He has raised the prestige of India at a global level. I believe India’s future is completely secure in his hands,” Scindia said.

Welcoming him, BJP president Nadda likened Scindia’s induction to his homecoming. He praised his grandmother Vijaya Raje Scindia, who from the inception of Bharatiya Jana Sangh and BJP was instrumental in advancing the Hindu nationalist party’s ideology across the country.

“I welcome his grandson to the party today. I feel that ours is a very democratic party where every individual has a say. He will also get a chance to participate in party activities,” he said.

Neither Scindia nor Nadda took any questions from the press.

The BJP has reportedly agreed to field him as its candidate in the upcoming Rajya Sabha elections and also give him a ministerial berth in Modi’s cabinet. It remains to be seen how the BJP accommodates the legislators who also resigned from the Congress with Scindia.

In the coming days, Madhya Pradesh is likely to see both the Congress and the BJP training its guns on each other. On Tuesday, both parties have moved their MLAs to different resorts to prevent any further horse-trading.

Scindia walked out of the Congress, along with MLAs seen as his loyalists in the state. He was resentful of the party’s high-command, following its inability to strike a truce between the Gwalior royal scion and politically-powerful duo of Digvijaya Singh and chief minister Kamal Nath.

Scindia had shown multiple signs of his disenchantment with the party in the past 1.5 years. However, instead of attempting to stem the party’s crisis, the Congress high-command let the Nath-Singh duo take greater control of the party in the state.

The immediate trigger for Scindia to leave the party was when his nominees were overlooked by Nath and Singh for the upcoming Rajya Sabha elections. The duo had also stymied his chances to become the Pradesh Congress Committee’s  leader earlier.

The BJP had attempted a coup last week when it reportedly flew eight MLAs – four from the Congress and four independents – to a Gurugram hotel. Although the Congress prevented the crisis by getting the Congress legislators back to its flock, Scindia’s open rebellion has made it almost impossible for the Congress-led state government in Madhya Pradesh to survive.