While JNU believes that the fundamental objective of knowledge is to break hierarchies that society imposes, the ruling regime believes not only in protecting these hierarchies but also creating new ones.

Students raise slogans as they take part in a march to save public education, in New Delhi, Monday, Dec. 9, 2019. Photo: PTI/Kamal Singh)

Until 2014, students and teachers of JNU were found occupying place in prime time shows of news channels as experts on various socio-economic and political issues. But post-2014, JNU has occupied prime time spots, almost every alternate week, for very different reasons.

The current JNU protests are against changes in the hostel manual and the steep increase in hostel charges that will force nearly 50% of its students to leave their education and stop scores of others from underprivileged backgrounds who dream of taking admission in this university. Both students and teachers of the university – through their representative bodies, JNUSU and JNUTA respectively – have unequivocally said that these changes are unacceptable, but the JNU administration has chosen to ignore them completely and is hell-bent on imposing these changes.

The students and teachers are arguing that it is the university’s responsibility to provide residential and mess facilities to those pursuing higher education at reasonable costs and hostels cannot be run on a self-financing principle as the new hostel manual proposes. A large number of students from marginalised backgrounds, particularly female students, have so far been able to both enter and successfully study in JNU only because the fee structure has remained very low. The students and teachers of the university see it as a part of a larger assault on inclusive public higher education, and a concerted agenda to destroy JNU.

A few months earlier students and teachers had protested because the JNU vice chancellor had selectively issued charge-sheets against 48 teachers, including a retired faculty, invoking CCS conduct rules for raising their voices against the destructive policies of the JNU administration.

The teachers got a stay since there were absolutely no grounds for the university to claim the applicability of CCS conduct rules for teachers. The Delhi high court pointed out that applying CCS rules to control faculty members was untenable since it would go against their basic role as  teachers responsible for  research and encouraging debate.

While we in JNU have a very clear understanding, the public at large is always perplexed about the nature of constant protests in JNU. In what follows, I make an attempt to explain the core concerns of students and faculty at the university. 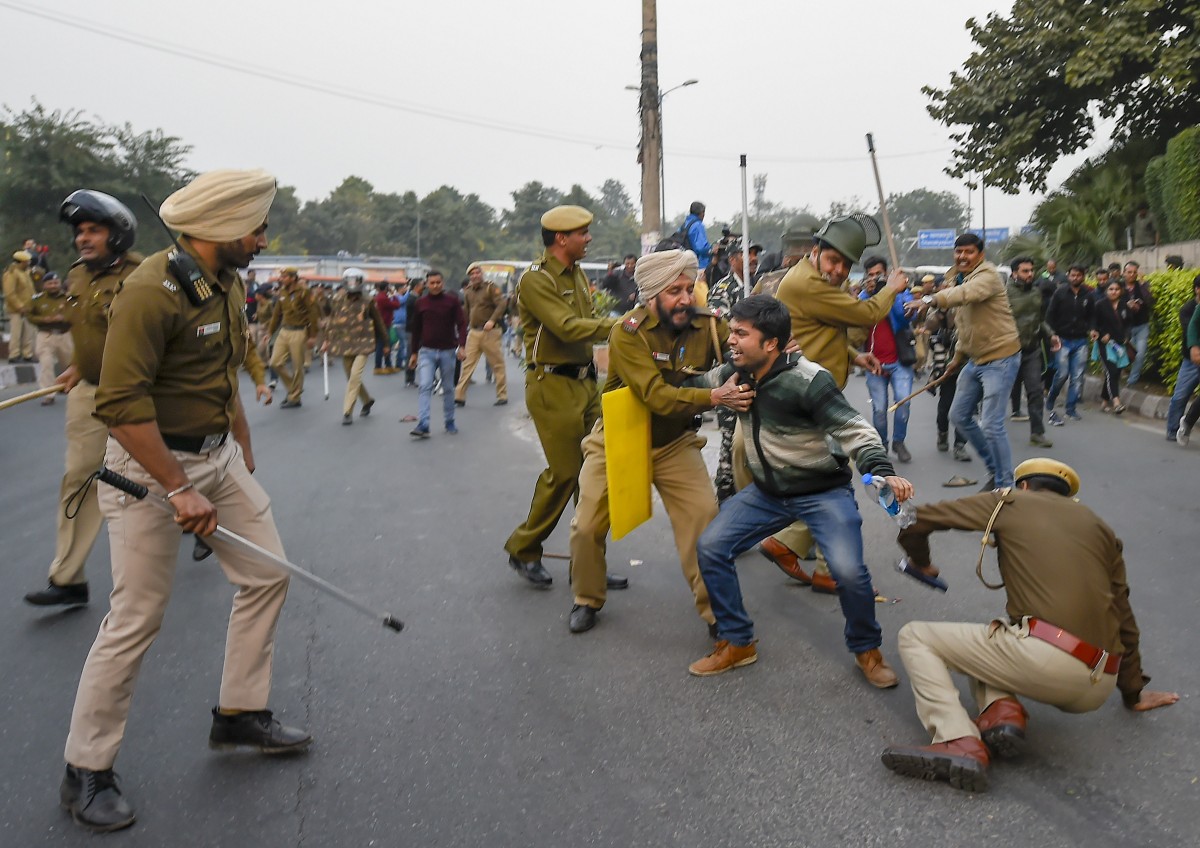 JNU students lathi-charged by the police during their march to Rashtrapati Bhavan, in New Delhi, Monday, Dec. 9, 2019. Photo: PTI/Kamal Singh

One of the foremost objectives of the JNU Act is to disseminate and advance knowledge, wisdom and understanding via the teaching and research of social needs. If this is so, why is JNU the target of the current regime? While we at JNU believe that the fundamental objective of knowledge is to break all kinds of hierarchies that society imposes on us and question existing wisdom in order to push the boundaries of knowledge; those in the ruling regime believe not only in protecting these hierarchies but also creating new ones. Over the years, JNU has been able to successfully break three types of hierarchies – that of identity (gender, caste, and religion); of disciplines; and the hierarchy between teachers and students.

Taking seriously upon itself the responsibility of fulfilling the objective stated in the JNU Act, the JNU community takes pride in claiming that this is not a university for children of the rich but for those deserving boys and girls, however marginalised and poor they may be.

Until this VC took over, JNU, without shying away from critiquing its own efforts, whenever necessary, became a microcosm representing the diversity of India through its unique model of deprivation points allotted for regional, economic and gender backwardness, over and above the constitutionally mandated reservation policy for Scheduled Castes, Scheduled Tribes and Other Backward Classes. The university implemented this objective even in its faculty composition. This was the first hierarchy that it demolished.

Subsequently, with the help of its diverse background of students and teachers, the second hierarchy that JNU dismantled was among disciplines. As a result, knowledge creation here instead of remaining within the boundaries of specific disciplines, transcended to create a unity of knowledge.

And none of this could have been achieved, if the JNU community had not broken the third hierarchy, i.e. between teachers and student within the classrooms. It became a university that practised inter-disciplinarity in the true sense. The pedagogy that the JNU community evolved was not based on the idea that teachers alone were custodians or owners of knowledge. Rather both teachers and students in JNU always remained seekers of knowledge. This resulted in form of interactive teaching and research with a collaborative connection between students and teachers.

It is for the first time in the history of JNU that we have seen a vice chancellor who is completely controlled and governed by the ideologies of a parivar that fundamentally believes in maintaining all the above-mentioned hierarchies. This is being pushed through by the current vice chancellor through repeated violations of the statutory provisions and obligations to alter the basic character of the university.

Ever since professor M. Jagadesh Kumar took over, he has undermined the integrity of the faculty selection process, He has restricted students from joining the university for higher studies and research, violated the Central Educational Institution Act 2006 and the constitutionally mandated policy of affirmative action, harassed and intimidated teachers who disagree or oppose these moves; assaulted all democratically elected bodies; destroyed JNU’s anti-sexual harassment policy which was achieved after a long struggle of the JNU community and created an atmosphere of fear among students and teachers. 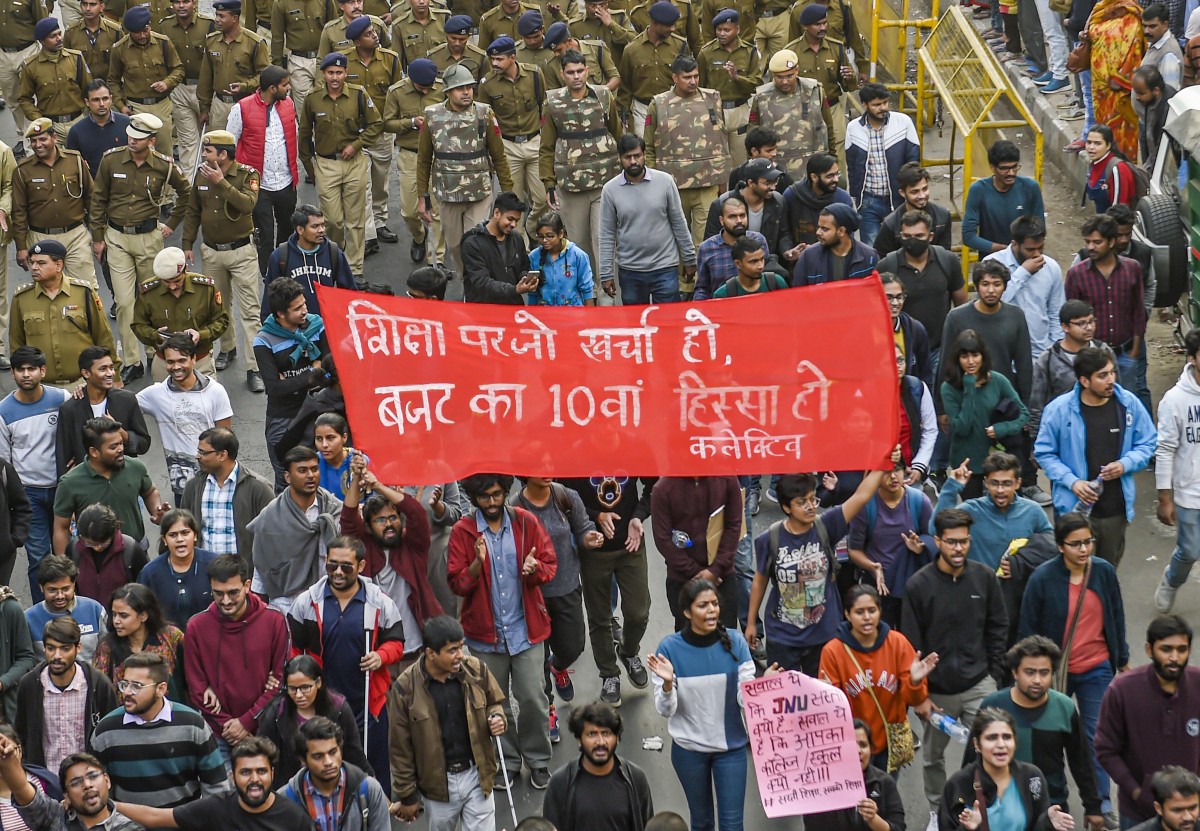 JNU students during their march from the university campus to Rashtrapati Bhavan, in New Delhi, Monday, Dec. 9, 2019. Photo: PTI/Kamal Singh

The JNU community has opposed every single move of the vice chancellor. Ever since Narendra Modi’s election in May 2014, there have been few occasions to feel hopeful about anything in general but particularly about politics in the country. Yet even in these difficult times, it is JNU that has spoken and voiced concerns about various issues.

This endeavour of the JNU community disturbs the current regime the most. It is the responsibility of governments in a democracy to create an environment where teaching and learning can be free and without inhibition and fear. What is happening today is exactly the opposite.

The government is forcing public universities to submit to the mercy of the market so that it can never create and nurture an egalitarian ethos. Whatever it may cost, the JNU community is united and determined in its resolve to fight against such an onslaught, save an inclusive public higher education system and protect the idea of India that is enshrined in the constitution.

Avinash Kumar teaches at the Centre for Informal Sector and Labour Studies, SSS, JNU and is the former secretary of JNUTA.