Jharkhand: Why Winning May Not Be a Breeze for Raghubar Das, Other Heavyweights

The Jharkhand chief minister's leadership style has come under criticism over the years. He also faces tough competition in former cabinet colleague Saryu Rai, who contesting as an independent candidate.

Political observers have maintained that the election this year around will not be a cakewalk for Das, who faces tough competition in former cabinet colleague Saryu Rai, contesting as an independent candidate from Jamshedpur East assembly constituency.

Rai decided to contest as an independent after being denied a ticket by the BJP – he has been a critic of Das’s policies and leadership style. During his campaign, Rai pulled in huge crowds and it was also learnt that many from the business community are backing him.

“Rai has given Das a tough fight, but it is still difficult to predict the outcome. Das, apart from having been at the helm of affairs, had the cadre More so, Das has represented this constituency for five terms – he knows many of the families. But the unfulfilled promise of regularisation of 86 illegal colonies will work against him. This is why it wouldn’t be an easy win for Das,” said journalist Ajay Ojha.

The Jharkhand chief minister’s style of functioning has been met with many unhappy murmurs over the years. Thus, cross party voting and support may not come as a surprise. 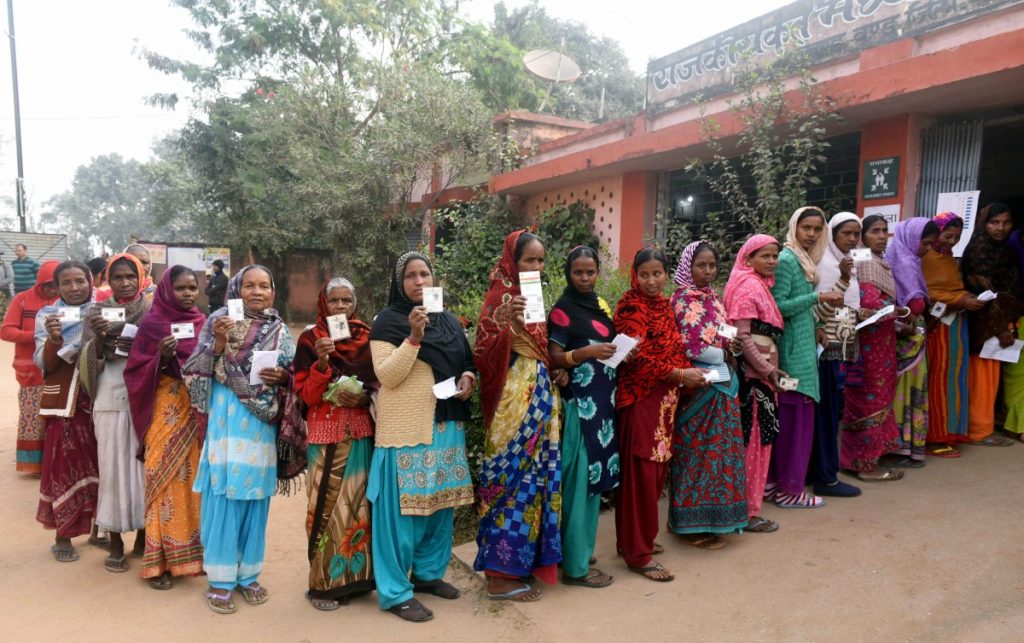 People wait in queues to cast their voted during the second phase of the Jharkand assembly elections, at Bundu, 45 km from Ranchi, on December 7, 2019. Photo: PTI

In speaker Dinesh Oraon’s constituency Sisai-West, about 60 km south of Ranchi, there was some police firing reported on the day of polling. It arose from a verbal spat between a policeman and voters at Bagni village in Sisai, and left one voter dead and two others injured. The victim has been identified as Gilani Ansari and the two injured are Astaf Ansari and Tabrej Ansari – both of whom were referred to Ranchi for treatment. Polling was cancelled in the booth following the incident, which took place at around 9.30 am.

Sisai has been the home of Congress veteran Kartik Oraon, who represented Lohardaga Lok Sabha seat in parliament. Oraon, however, played one group of tribes against another group across religious lines, a tactic that failed and eventually allowed the BJP to pick up the seat.

While the Lohardaga Lok Sabha seat is now being represented by Sudarshan Bhagat, Sisai Lok Sabha seat is in Dinesh Oraon’s hands – and both are from BJP. During the last assembly election, Oraon had secured 44,472 votes and Jiga Susaran Horo had come second with 41,879 votes.

“It won’t be easy for Dinesh Oraon to win, given the pattern of votes, as Jharkhand Mukti Morcha candidate Jiga Susaran Horo has given him tough fight,” said a Sisai assembly constituency voter.

Overall, the polling percentage recorded in the second phase was 59.27%.

In Khunti, which served as the epicentre of the Pathalgadi movement, state minister and BJP veteran Nilkant Singh Munda is trying to save his seat. While JMM has fielded greenhorn Sushil Pahan, Jharkhand Vikash Morcha candidate Dayamani Balra, an anti-displacement activist is likely to emerge as his main opponent.

In Torpa, BJP’s Koche Munda is up against JMM’s Sudeep Guria. Munda had last time lost to Paulus Surin, whom JMM did not give a ticket to this year.

“The fight in Khunti and Torpa was a fight between politics of religion and politics of identity and rights,” said an assistant professor of Birsa College, Khunti.

The Singbhum region also went to the polls today in the second phase. Singbhum has been politically hyperactive as far as identity politics is concerned. It was here that legendary Jaipal Singh Munda had converted the Akhil Bharatiya Adibasi Mahasabha into Jharkhand Party, reportedly on the advice of veteran leader Justin Richard.

Ever since, Singbhum has remained hot bed of identity politics and is now the Jharkhand Mukti Morcha’s indomitable political fort. It has also offered strong opposition to Das’s attempts to amend the Chhota Nagpur Tenancy (CNT) Act and Santhal Pargana Tenancy (SPT) Act.

JMM veteran Champai Soren is trying to make a comeback from Seraikela seat and is up against Ganesh Mahli of the BJP. State BJP president Laxma Gilua had lost his Singbhum Lok Sabha seat in the recent general elections to Geeta Koda, wife of former chief minister Madhu Koda, who had merged her Jai Bharat Samanta Party with the Congress to get the ticket. Gilua is now fighting for the Chakradharpur assembly seat.

Mandar, a constituency on the outskirts of Ranchi, populated mostly by tribal and Muslim voters, is likely witness interesting results. Bandhu Tirkey, who had been put behind the bars on the charges of obstructing public servants from performing their functions and owning disproportionate assets, was released on bail just a few days before the poll and the sympathy of the voters may just work for him. The BJP had replaced sitting MLA Gangotri Kujur with former Congress leader Deo Kumar Dhan.

Kolebira and Simdega are two constituencies where the Jharkhand Party, which has its link with legends like Jaipal Singh and N.E. Horo – both of whom stand for statehood and identity politics – is a major player. Apart from Pathalgadi movement, these two constituencies are under the influence of Sengel Abhiyan – (‘Sengel’ meaning ‘fire’ in local Mundari language, thus ‘fire movement’). This is a tribal rights-based faction which has given its own candidates. The fire movement activists – another form of identity politics – have formed Rashtriya Sengel Party and fielded a candidate in Kolebira. Sengel votes have traditionally gone to the Jharkhand Party or the Congress.

In the third phase, scheduled for December 12, a total of 17 constituencies – including those in state capital Ranchi, as well as former chief minister Babulal Marandi’s constituency, Dhanwar – will go to the polls.