Saryu Roy's remarks come in the wake of an 11-year-old girl's death in the state after her family’s ration card was cancelled for not being linked to their Aadhaar number.

New Delhi: Days after reports of a young girl’s death soon after her family’s ration card was cancelled for not being linked to Aadhaar card, the Jharkhand PDS minister has come up with a bewildering remark. Saryu Roy has said that his government’s policy of cancelling non-Aadhaar linked ration cards is creating “confusion”, further adding that he has issued instructions to revoke this order.

On March 27, Jharkhand chief secretary Rajbala Verma had ordered all district distribution officers to “debar ration cards that were not linked to Aadhaar numbers for food grain distribution from April 5”, Telegraph reported. However, Roy even then had claimed that his department is not party to the decision. 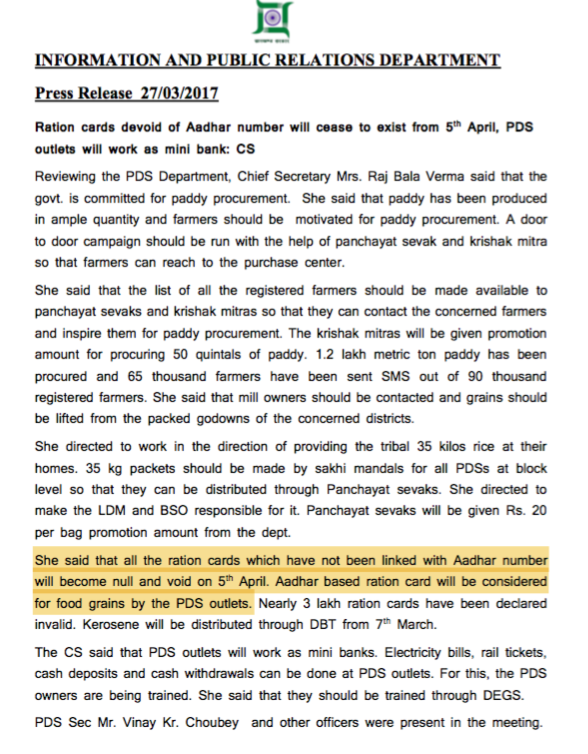 “When this (Verma’s order) came to light, I asked my officials in a written order on April 5 to ensure that no ration card gets deleted due to non-linking with Aadhaar. It is possible that some names got deleted due to the confusion,” Roy told Indian Express.

While this sounds well and good in principle, it ignores the fact that Aadhaar-based biometric authentication is needed in a large majority of Jharkhand’s ration shops, activists say. Even if ration cards are not cancelled, per se, those who have not linked their Aadhaar cards to the their ration cards will not be able to access these benefits.

The state decided to make the move to this biometric-authenticated PDS system in separate ways, depending on internet connectivity in different regions. The online system is meant for regions with strong internet connections. Once an Aadhaar-linked person goes to a ration dealer’s shop, the POS machine is used to ID them using their biometrics and if that works, they are given a receipt, asked for the payment and given the ration due to their household. The offline system seems to work almost exactly in the way the old register system did – except that instead of a register the dealer uses a POS machine and those without Aadhaar cards aren’t eligible to rations.

According to government data, more than 90% of the population in Jharkhand is registered in the Aadhaar system. While this is an impressive number at first glance, it seems as though the people excluded are often those who most need the PDS – the elderly who live alone, persons with disabilities and others who for some reason or the other were simply not able to get their card made.

Economist and activist Jean Drèze has written several articles on how biometric identification has led to people being unable to avail of the rations due to them. “We have drawn attention for more than a year to the fact that ABBA (Aadhaar-based biometric authentication) is an inappropriate technology for rural Jharkhand. It has led to the exclusion of millions of people from the PDS, according to the government’s own data. The recent starvation death in Simdega is just an extreme example of the hardships they are facing. Despite these warnings, the Jharkhand government obstinately refuses to listen. In this case, once again, the government is trying to deny the facts instead of facing them. The central government, too, is in denial mode,” Drèze said in a statement in response to Roy.

Drèze and others have been regularly highlighting the problems biometric authentication has created in the PDS. Writing for Scroll.in on the problems arising in Jharkhand’s Kunti block and the many families who were being denied their ration because of authentication failures, he said:

The local Public Distribution System dealers were present at the hearing, but they pleaded helplessness. They have strict instructions not to distribute rations without biometric authentication.

The block supply officer, who was sympathetic, admitted that the victims had been deprived of a legal entitlement, but saw no way around it since he has similar instructions. There is no fallback facility in the event where Aadhaar-based biometric authentication fails. And it is not difficult for the system to fail – lack of connectivity, biometric failure, server problems, wrong seeding, or linking, of Aadhaar data, cryptic error messages (such as “invalid”) are some of the reasons that were reported at the public hearing.

We also heard the findings of a small survey of the Public Distribution System conducted last January by the local NREGA sahayata kendra, a help centre for workers employed under the National Rural Employment Guarantee Act. The survey covered 225 households in four hamlets of Tirla gram panchayat: Belahathi, Simbhukel, Saridkel and Todangkel. This gram panchayat, very close to the block headquarters, is likely to have better connectivity than most other gram panchayats in Khunti. Yet, among 225 sample households, as many as 40 reported having been deprived of Public Distribution System rations for one month or more since Aadhaar-based biometric authentication was made compulsory last year.

Further, 100 households reported having had problems with the biometric authentication system, leading to a considerable waste of time. For instance, when connectivity failures force them to make repeated visits to the Public Distribution System outlet.

The Jharkhand government, as well as the BJP, have said that Santoshi Kumari, the 11-year-old girl who died recently in Simdega district, died not of starvation but because of malaria. While Roy may be in denial about just how embedded Aadhaar is in Jharkhand’s PDS system and is focusing on only part of the issue (cancellation of cards and not authentication troubles as well), he, unlike the rest of the government, seems to recognise that there is at least some kind of a problem in the system. “The initial report says the death was due to malaria. While there could be doubts over the cause of death, we have to ensure that no ration card is deleted because of non-availability of Aadhaar. I have asked officials to check as to how many cards got cancelled due to non-linking of Aadhaar,” Indian Express quoted him as saying.