As Jharkhand Polls Come to an End, All Eyes on December 23

With AIMIM and TMC in the fray, the election results could go any which way despite a strong anti-incumbency factor. 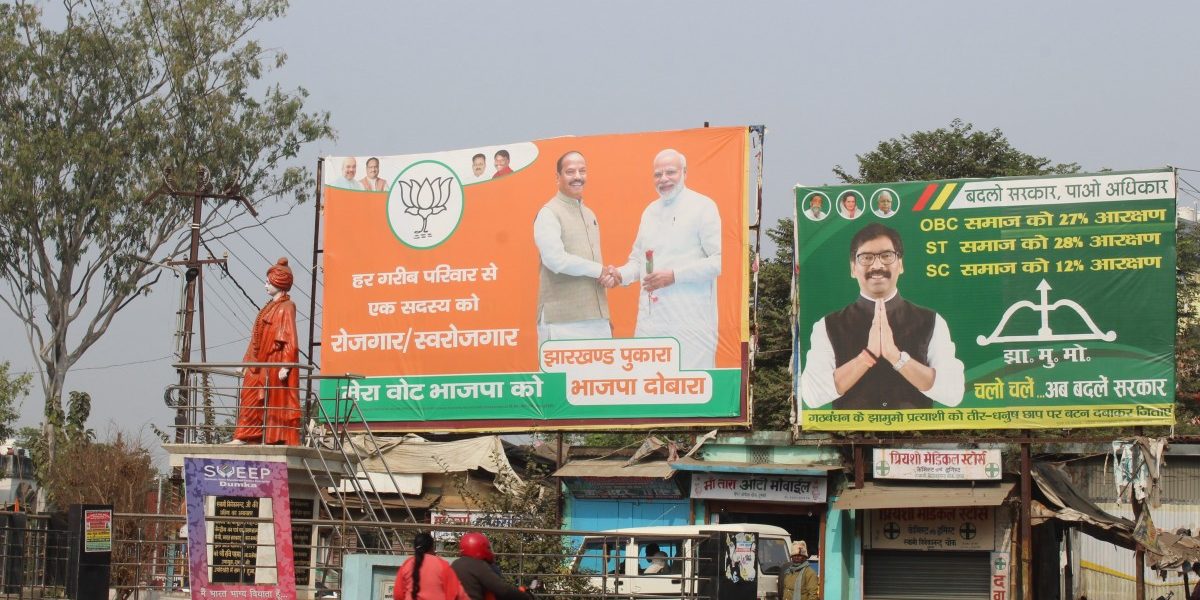 A couple rides past hoardings of JMM and BJP at Swami Vivekanada Chowk in Dumka. Photo: Santosh K. Kiro

Ranchi: The National Register of Citizens (NRC), Citizenship Amendment Act (CAA), Article 370, Ram Mandir, Pakistan, unemployment and inflation, communalism and secularism – any and every electoral bullet was fired by motor-mouth politicians in the state during the five phases of the Jharkhand assembly elections. Which of these tactics paid off is still not clear, but if pollsters are to be believed, the outcome may entirely depend on the combination of candidates in a seat.

While the TMC is unlikely to have direct influence on the results, AIMIM’s entry into the poll foray could shake things up. Some experts have even said the AIMIM could end up tilting the electoral outcome towards the ruling BJP in 8-10 seats.

According to analysts, though AIMIM may not win even a single one, its candidates have cornered a large number of Muslim minority votes – which would normally go to the JMM-Congress-RJD coalition – thereby ensuring a possible increase in the seat tally for the BJP despite the strong anti-incumbency factor.

The MCC set up by veteran labour union leader A.K. Roy and other left parties like CPI-ML, CPIM maintained its distance from the BJP and JMM-Congress-RJD coalition. However, it may consider supporting the Hemant Soren-government in case of a situation favouring JMM-Congress-RJD.

The TMC, on the other hand, had fielded candidates in Garhwa, Bhawanathpur, Panki, Tamar, Jagganathpur, Chaibasa, Manoharpur, Barhi, Kanke, Madhupur, Jharia, Littipara and Shikaripara. But things are not bright for TMC in Jharkhand. During the last assembly elections too, Trinamool had fielded candidates but did not pick up even a single seat. 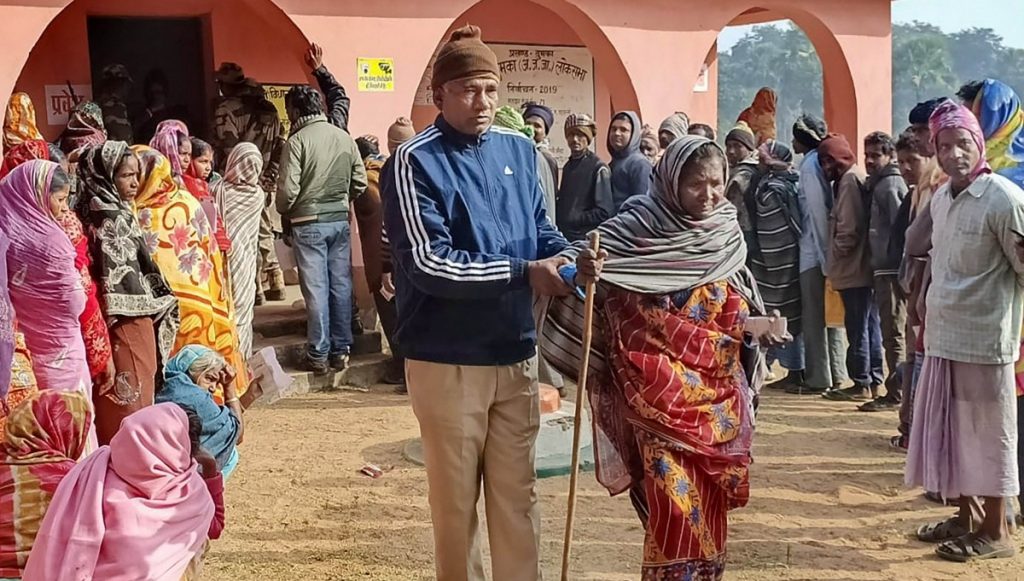 An elderly voter during the fifth phase of the polls in Dumka, December 20, 2019. Photo: PTI

Exit poll results notwithstanding, election analysts gave 25-27 seats to BJP, 22 seats to JMM, 12 to Congress, seven to Ajsu Party, three to RJD, four to Jharkhand Vikas Morcha, four to the Left and the rest to other smaller parties and independents. Thus, the BJP may still yet emerge as the single largest party, but JMM-Congress-RJD will be the largest coalition. In such a situation, smaller parties, particularly the Ajsu Party, will become kingmaker.

Former chief minister Babulal Marandi, who has been claiming that voters want his party to form the government, may yet prove to be a loser though his party will play a decisive role in government formation. “Looks like December 23 counting day will throw up a hung assembly. I fear the Ajsu Party will demand for the chief minister’s post, going by the Maharashtra example,” said a senior BJP leader.

The Jharkhand assembly has a total of 81 members; and one member nominated by the governor, usually from the Anglo-Indian community. Polling began on November 30 in Chatra, Gumla, Bishunpur, Lohardaga, Manika, Latehar, Panki, Daltonganj, Bishrampur, Chhatarpur, Hussainabad, Garhwa and Bhawanathpur. The last phase of the polling took place on December 20 – in JMM-stronghold Santhal Pargana with a huge 71.17% voter turn-out.

While the state BJP completely depended upon Prime Minister Narendra Modi and Union home m inister Amit Shah for collecting votes in all the phases, the JMM-Congress-RJD combine mostly relied upon itself, though senior Congress leader Rahul Gandhi addressed a few rallies in different places around the state. His sister Priyanka Gandhi Vadra too visited Jharkhand one to address a rally.

A strong anti-incumbency factor was present in different regions of the state, particularly due to the policies of chief minister Raghubar Das. While the tribes were unhappy with him as he tried to amend Chota Nagpur Tenancy (CNT) and Santhal Pargana Tenancy (SPT) Acts, the minority Muslim community was unhappy because of numerous lynching incidents in which members of the community were victims. The second phase region – comprising the belligerent Khunti-Simdega-Chaibasa region that had witnessed pathalgadi stir as a response to poor governance and implementation of government schemes – too had antipathy against Das.

Voters in remote villagers cried hoarse against systematic crippling of the public education system with many schools being reduced to just a para-teacher and a mid-day meal cooking maid. More so, there was displeasure of the para-teachers and the anganwadi workers as their demands for hike in remuneration had been disgraced with police action by the state government. The Christian community was unhappy because of the BJP government’s anti-conversion law, particularly aimed at the Church.

The Modi-Shah’s election rallies began with Ram Mandir, Article 370 and Pakistan in the first phase – in Palamau divisional region – but as the time passed, gained more communal colour. After the Central government managed to pass the CAA in both houses of parliament, election campaigns got muddier.

The communal tone of the electioneering culminated in Dumka where Modi made his infamous ‘clothing’ remark on how to identify protestors. At another rally in Santhal Pargana’s Bhognadih two days later on December 17, he dared the Congress to announce to give ‘citizenship to all Pakistanis’.

Though opposition leaders like Rahul Gandhi, and coalition’s chief ministerial candidate Hemant Soren tried to get Modi-Shah duo to campaign on real issues of Jharkhand, they too fell prey to the communal tone set by the BJP. During the initial days of the campaign, the opposition had managed to raise the issues of unemployment, growing job loss, lynching, law and order problem, food security  and more. But as the days progressed, their campaign also fell in line with that of the BJP, replete with mudslinging. In the process, the real issues were forced to take backseat.

“The JMM has gained strength during the last few assembly elections. For a party that once remained restricted to Santhal Pargana alone, it has now spread to Chotanagpur and Palamau region too. This election too will see an increase in the strength of the party,” said Ashutosh Pandey, a political science professor at Ranchi’s St Xavier’s College.

He said many in the BJP would like a change in leadership if the saffron party emerges as the single largest party. “Things like NRC, CAA, Temple, Article 370, Pakistan during the rallies of the leaders had little influence on the voting pattern. At the end of the day, the entire poll outcome depends on the candidate combination of respective seats. Ajsu Party and Jharkhand Vikas Morcha of Babulal Marandi will play crucial role government formation,” Pandey added.

In fact, right from the beginning of Jharkhand, it is smaller parties and independent legislators who have called shots in government formation as most elections have thrown up a hung assembly. Marandi himself tasted the tantrum of smaller parties when he was BJP’s chief minister in the state. His government fell after the independents pulled off. Now, he will be on the other side.

Counting is set to take place on December 23. The BJP had begun its poll campaign with slogan: ‘Is bar 65 par’ (this time more than 65). Chief Minister Raghubar Das, interacting with the media after the last phase polling, appeared confident and said that the slogan would come true. “The exit poll predictions will be proved wrong on December 23,” he said.

JMM-Congress-RJD coalition’s chief ministerial candidate Hemant Soren, while interacting with the media at the end of the last phase of polling, said that his coalition stood for a positive campaign while the BJP pursued a negative approach. “Though we do not so much attach importance to the poll result predictions, we believe the coalition is headed for government formation. Anti-Jharkhand forces have been voted out,” said Soren.