Despite a tangible anti-BJP mood in the state, the opposition alliance managed to win only two of the state's 14 seats, prompting it to introspect. 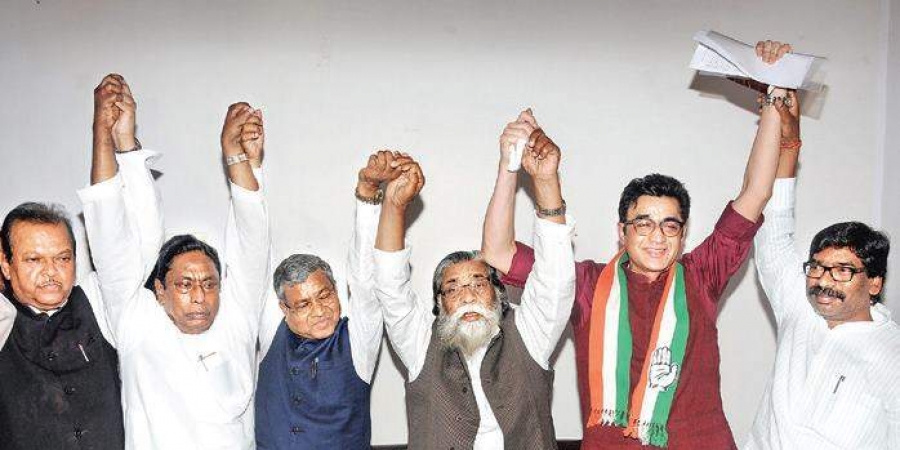 Ranchi: The general elections are over and Narendra Modi is back with a thumping majority. But in Jharkhand, the election season is far from over. Assembly elections are barely six months away, and  await.

While the victorious BJP is enthused, the JMM-Congress-Jharkhand Vikas Morcha united opposition (mahagatbandhan) seems to be slowly lurching out of the shock to analyse the situation. It is still unable to come to terms with the drubbing, which came despite large-scale displeasure against the BJP state government.

Voters, particularly from tribal communities, were very unhappy with the state government’s policies, particularly the attempts to amend the Chotanagpur Tenancy Act, Santhal Pargana Tenancy Act, the Local Residence (Domicile) Policy among other things. The pathalgadi movement in the Khunti Lok Sabha constituency – the hub of Munda voters – was thought to be a natural reaction to these policies. Voters were also unhappy with the way the government came down heavily upon the people of the region to suppress the movement instead of addressing their discontent with dialogue. In Lohardaga constituency too, tribal voters were unhappy with the BJP, and so was the situation in Santhal Pargana. However, in all these regions, the BJP did a clean sweep, leaving the Congress-JMM and JVM wonder what went wrong and where. Even the BJP, which was doubtful of victory in these areas, is wondering how it won. 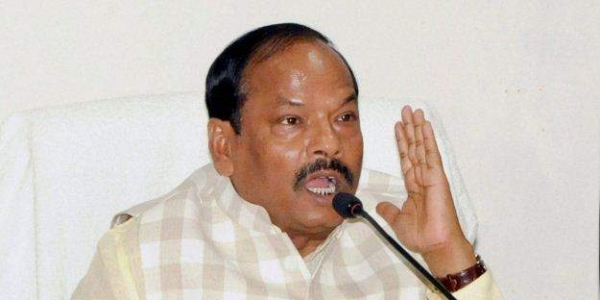 Local issues did not play a role

Arun Oraon, the All India Congress Committee (AICC) secretary, in-charge of Chattishgarh, agrees there was an anti-BJP wave across Jharkhand, especially among tribal voters. The former IPS officer said, however, local issues did not play a role in the general elections, as the Congress had hoped. “Different constituencies have different reasons of our defeat,” said Oraon, who ensured a massive victory for his party in the Chattishgarh assembly elections in December 2018. He is the son of highly respected tribal leader, Bandi Oraon, also a former IPS who worked across India along with IAS officer B.D. Sharma on several tribal issues like Provision of the Panchayat (Extension to Scheduled Areas) Act, Forest Rights Act among others.

“Simple arithmetic – the idea that when two or more parties join hands, their voters too will come together – also did not happen. We failed to work at the booth level, on the other hand, the RSS workers canvasses across the state, down to the the booth level,” said Oraon.

All the Opposition bigwigs – JMM patriarch Shibu Soren, JVM chief Babulal Marandi, former Union minister Subodh Kant Sahay lost the election. The BJP ran away with 12 seats, leaving only two for the opposition – one each for the Congress and the JMM. While the Congress’s Geeta Koda defeated state BJP chief Laxman Gilua from Singbhum, the JMM’s Vijay Hansdah managed to keep his seat from Rajmahal.

Singbhum too is a tribal hub, with decisive ‘Ho Munda’ voters who were unhappy with Gilua due to his stand on the CNT/SPT Act amendments. But unlike other tribal seats like Khunti, Lohardaga, Dumka, tribal votes in Singbhum were not divided. In the other three seats, tribal voters were divided on religious line: Christian and Sarna.

The Sarna religion is often pandered to during elections. The government has promised a ‘Sarna Code’ in the 2021 Census for the tribes who follow the ancient religion, which worships nature. Christian tribes, an educated group within the tribal community, have often been labeled as cornering the benefits of reservation in jobs and education. The BJP managed to divide the tribes along the Sarna and Christian lines through various acts and utterances, which the opposition failed to counter.

Khunti was won by former chief minister Arjun Munda, now a cabinet minister. He often stood by the tribals against the state government’s attempts to amend land laws, though the win was by a very thin margin.

Mahadev Munda, a Khunti Lok Sabha voter, said residents of Kharswan and Tamar assembly constituencies voted massively in favour of Arjun Munda because they regretted that they had cost him the last assembly election. “Development and welfare works were not happening in Kharswan after Arjun Munda lost there,” he said.

Arjun Munda defeated the Congress’s Kalicharan Munda, the brother of Nilkath Singh Munda, a minister in the state BJP government. “The mahagatbandhan leaders did not manage to reach the booth level. While the BJP workers were everywhere, the coalition did not work properly and its men were not seen in most places. The Congress thought voters will naturally vote for it as there is wide-spread discontent among all sections against the BJP,” Mahadev, who is the coordinator of the Munda tribes’ social organisations in Chotanagpur, pointed out. 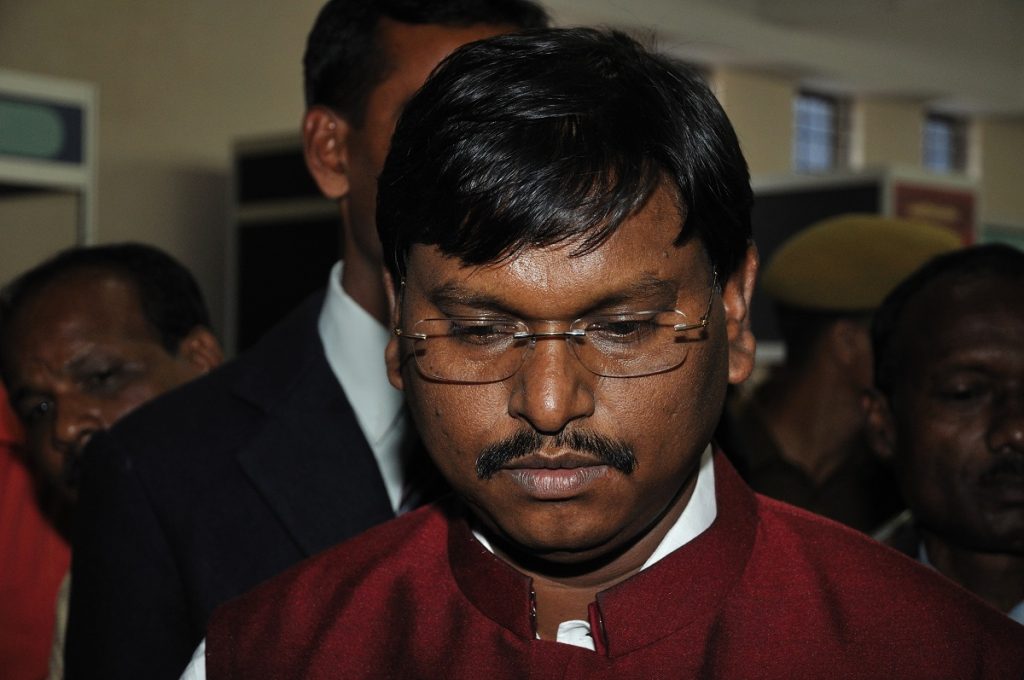 Dumka on the other hand has been a traditional JMM fort, represented by statehood pioneer Shibu Soren, who was fighting the ‘last election’ of his political life. Dumka Lok Sabha seat has three assembly constituencies reserved for tribal candidates – Sikaripara, Dumka and Jama – and the other three – Nala, Jamtara and Sarath – are general. “Nala and Jamtara voted in favour of the BJP. Even the traditional JMM cadre vote there shifted to the BJP, because of their caste and religious alignment,” said Ramesh Hembrom, a political analyst and social activist based in Dumka.

Jamshedpur, a general Lok Sabha seat, has also been a traditional JMM constituency. The steel city was the hub of JMM’s politics for many decades. Newly sworn-in Union tribal affairs minister Arjun Munda, too had once represented it, followed by Vidhyut Baran Mahato, who managed to retain his seat in this election too. However, both Munda and Mahato had their origin in the JMM, which has a strong presence among the Kurmi-Mahato voters there. The JMM fielded Champai Soren, also a JMM veteran, against Mahato.

“Mahato votes concentrated on religious line completely. This is the reason for the JMM’s Jagarnath Mahato losing from Giridih and Vidyut Baran Mahato of the BJP winning from Jamshedpur,” said Raju Mahato, a social leader who works across Jharkhand on socio-political issues. Shailendra Mahato, a statehood movement leader who was initially with the JMM and later joined the BJP but quit, countered this view. “It is true that they voted for the BJP, but they are still JMM sympathisers at heart. The voting pattern was because the JMM did not field a Mahato candidate from Jamshedpur,” Shailendra Mahato, himself a voter in the Jamshedpur constituency, said. He added that the assembly election will see a different voting pattern.

Most post-poll analysts have suggested that the Lok Sabha result will have ample influence on the assembly elections. The mahagatbandhan’s leaders are trying to put on a brave face, promising to bridge loopholes in the coalition and in electoral management.

Also Read: In This Jharkhand Village, No One Can Come or Go Without the Army’s Permission

V.P. Sharan, a former professor at the political science department of St Xavier’s College in Ranchi, says many factors, including the 10% reservation for economically poor upper castes, played in favour of Prime Minister Narendra Modi. “Besides, the Congress could not take its NYAY announcement to the voters,” he said. Sharan notes that the Lok Sabha election outcome in Jharkhand will bear some impact on the assembly elections.

In Jharkhand too, the Congress has been thrown into internal problem, and party leaders are yet to discuss the situation. The BJP, on the other hand, is in high spirits. Chief minister Raghubar Das, who had focused on Santhal Pargana in his Lok Sabha campaign, the fort of state’s tribal politics with a slogan of ‘JMM-mukt Jharkhand’, has continued touring with the assembly polls in mind. A few days ago, during a visit to Santhal Pargana, he claimed the BJP will do another ‘clean sweep’ in Santhal Pargana in the assembly election too.

JMM working president Hemant Soren, meanwhile, held a meeting to introspect with his party leaders. Following the meeting, he admitted there was some gap in coordination between the mahagatbandhan partners. He said the mahagatbandhan will continue to face the BJP in the assembly elections with a different strategy. “Whatever is the strategy, the leaders will have to assure the people that they have a better alternative,” Arun Oraon, the AICC secretary in-charge of Chattisgrah, who hails from Jharkhand, observed.