At a time, when the BJP government has taken strong positions against Pakistan, the prime minister's wife’s support to the yatra may be seen as a possible defiance. 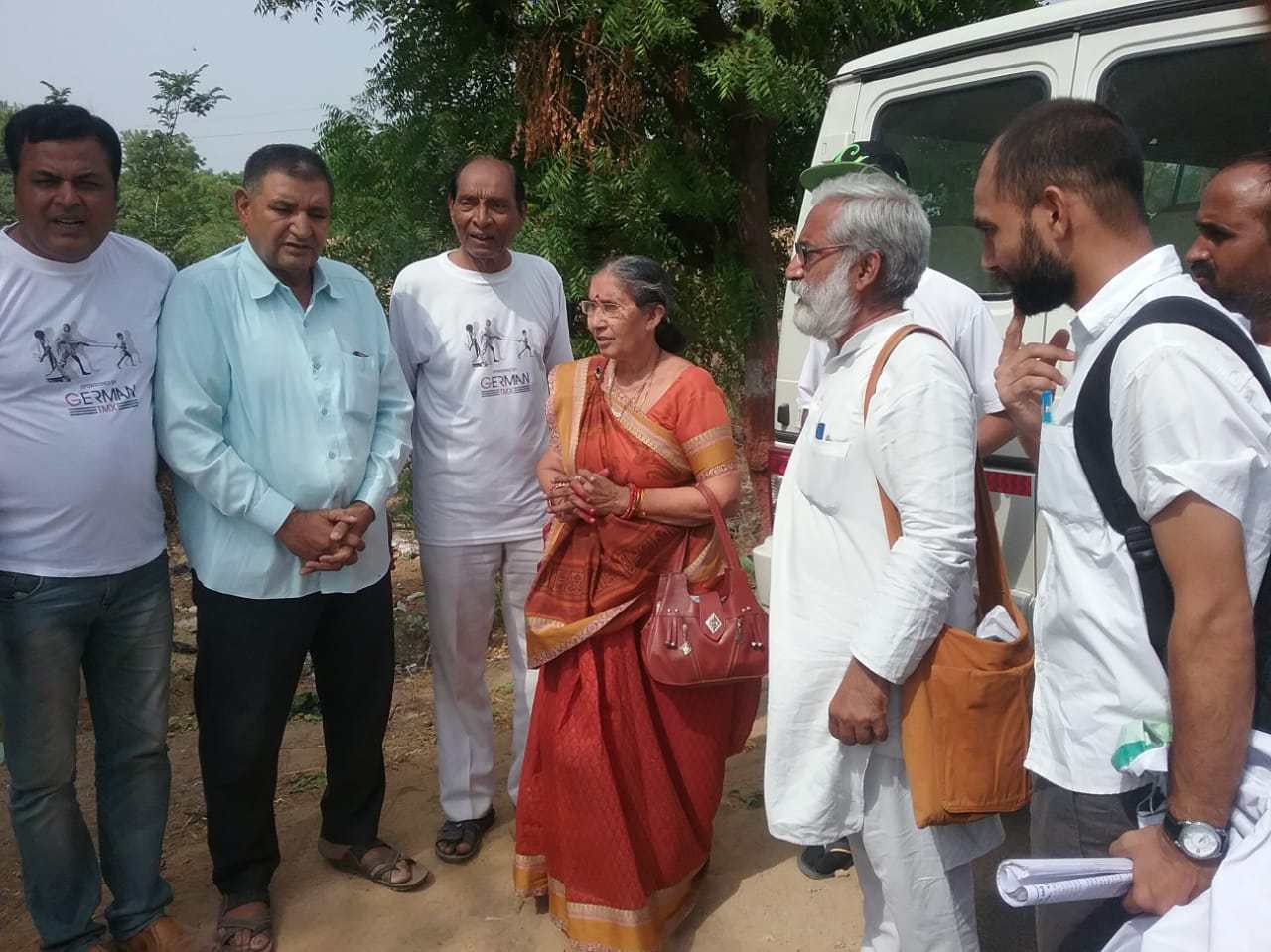 Jashodaben with the workers of the India-Pakistan peace yatra.

New Delhi: A padayatra (march) in north Gujarat is getting all the attention these days. Flagged off by the Socialist Party (India), which socialist ideologue Ram Manohar Lohia had founded after Independence, the yatra meant to promote peace between India and Pakistan created a stir when Jashodaben, the estranged wife of Prime Minister Narendra Modi, decided to join the march in support for the cause. At a time, when the Modi government has taken strong positions against Pakistan, Jashodaben’s support to the yatra may be seen as a possible defiance.

The yatra, which began in Ahmedabad on June 19, will end on June 29 near the border in Banaskantha district. It was when the march was passing through Patan district when Jashodaben rallied with the team of eight which has been walking along the region to promote greater interaction between the two nations.

“Our coordinator Kausar Ali Sayyad approached Jashodaben for support. Upon hearing our mission, she readily agreed. She and her brother Ashok Modi joined us for half an hour at a village called Sihi in Patan district. She categorically said that the borders of India need peace and the war rhetoric should stop. Yuddha Nahin, Shaanti Chahiye (Not war, we want peace) was her slogan. She said that the violence at the border should stop and we must not sacrifice our soldiers unnecessarily,” social activist and Magsaysay award winner, Sandeep Pandey, who is leading the yatra, told The Wire.

“She walked with us for around half an hour and wholeheartedly supported our endeavour,” Pandey added.

At the end of it, the march will cover five districts – Ahmedabad, Gandhinagar, Mehsana, Patan and Banaskantha – which have been severely affected by an agrarian crisis in the last few years. The members of the yatra have been openly been critical of the Modi government’s policies and its anti-Pakistan rhetoric, which they feel has been used for political benefits by the ruling Bharatiya Janata Party.

In this context, Jashodaben’s statements may come as an embarrassment for the BJP, whose popularity in Gujarat has been spiralling down.

The Socialist Party (India) has put forward two primary demands. One, the roads to Pakistan from Gujarat should be opened. “Gujarat is the only state sharing its border with Pakistan to not have direct access to the other side. Punjab, Rajasthan and Jammu and Kashmir have at least one road which people use to go to Pakistan. I am told that until 1972, there was direct bus to Pakistan but that was stopped as the roads were closed for public use,” Pandey said.

“Gujarat has a considerable number of families who have relatives on the other side. But right now, all of them get their visas from Delhi and cross the border through Wagah in Punjab,” he said, adding the whole process is harrowing for such families.

“Two,” Pandey said, “we think there should be Pakistan consulate in Ahmedabad. There are so many fishermen who get arrested in Pakistan waters. And they do not even get to know about their whereabouts. They do not get to know whether they have been arrested or not. These are poor people. The only way they can get any information is to get in touch with Pakistan’s High Commission in Delhi.”

Pandey said that the yatra has a special relevance in current times. “There is a clear divide. The upper class, upper castes look at the rally with suspicion. But daily wage workers, farmers and generally the poor have all supported our cause. We have not met more than four or five people who have opposed our yatra. Most of them supported us. They said if there is peace between the two countries, there will be nothing like it.”

He further said, “Interestingly, the trader class – mostly Hindus – are supporting us with great fervour. They hope that peace between the two countries can help increase trading activities between the two countries. Despite the widespread support, the political environment has become such that any peace mission is being looked at with scepticism.”

Pandey said that many Hindus across north Gujarat have come forward to support the initiative. “For example, in Balishana, Patan, around 100 Hindu families have relatives in Nagarparkar, the first village in Pakistan across the border. The village is predominantly Hindu-dominated. In the 1971 war, India has made a tehsil there but returned the village to Pakistan after the war. The animosity between the two countries have many adverse impact on people’s lives.”

Yet, ever since its inception, the yatra has had to face resistance from the state’s security forces. Pandey and his colleagues were arrested in Ahmedabad on June 19 as the police withheld permission for the rally. Then, the Border Security Force, too, has asked the organisers to stop the rally 27 kilometres away from the border. The organisers had planned to end the rally at the last village on the border.

Kausar Ali Sayyad, the coordinator of the yatra said that need of the time is to promote peace, not war. “Everywhere we went, we found huge support. But the governments on both sides are using the language of war for political benefits. They must realise that such rhetoric has a huge impact on the lives of common people.”