Support from local parties has given a clear edge to Congress in a region where BJP is facing anti-incumbency.

Srinagar: In 2014, the Bharatiya Janata Party (BJP) swept the parliamentary polls in Jammu, riding high on the ‘Modi wave’ and benefiting from “division of secular votes”. Five years later, the right-wing party’s MPs are again banking on “Modi’s image”. But this time around, it won’t be a cakewalk.

Congress, which has squandered opportunities in every other state to form alliances, has in Jammu got the backing of two regional forces, the National Conference (NC) and the People’s Democratic Party (PDP). Both the parties have decided against fielding candidates in Jammu-Poonch and Udhampur-Dooda.

This gives a clear edge to Congress, particularly in Pir Panjal and Chenab divisions which comprise five of ten districts of the Jammu region and contribute a significant chunk of votes to both parliament constituencies.

The National Conference was the first to announce support for Congress. This seat-sharing agreement was clinched at a meeting between senior leaders of the two sides in Jammu on March 20. Addressing a press conference, NC’s vice-president Omar Abdullah said the party took the decision to ensure there was “no division of secular votes”.

The BJP has repeated its candidates on the two seats while the Congress fielded Vikramaditya Singh, grandson of the last Dogra ruler Maharaja Hari Singh from the Udhampur seat, and former state minister Raman Bhalla from the Jammu seat.

“This election is about saving the country and its secular character, and in this battle, people will side with secular forces. Besides, Jammu people have been let down by the BJP, both at the Centre and earlier in the state. They will teach a lesson to the party whose politics revolves around dividing people,” said senior Congress leader Taj Mohi-ud-Din.

Also read: Yet Another Rebuff to Popular Will in Jammu and Kashmir

The party is also hopeful of benefiting from the PDP and NC’s decision to support it. “Today our vote-share in Jammu has grown to more than three lakh votes,” said Mehbooba. “We all know where this vote will go.” On the other hand, local leaders of the National Conference have been canvassing for the Congress in the region.

Political commentator Zafar Choudhary said there will be direct contests between the BJP and Congress on both the seats, and NC and PDP’s support will certainly prove advantageous for the Congress, particularly on the Udhampur seat where the party lost by a narrow margin last time.

Former BJP leader Choudhary Lal Singh, who quit the party after he was axed as a minister for his participating in a rally supporting a Kathua rape and murder accused, has floated his own party, the Dogra Swabhiman Sangathan, and is contesting from both the seats.

Many believe that he will be a hurdle for the BJP as his political agenda is a replica of that of the right-wing parties. He has been holding rallies, particularly in Kathua and Samba districts, a part of the Jammu constituency for past 7-8 months, and is eyeing the vote-bank of the BJP in Jammu, Rajouri and Poonch districts. 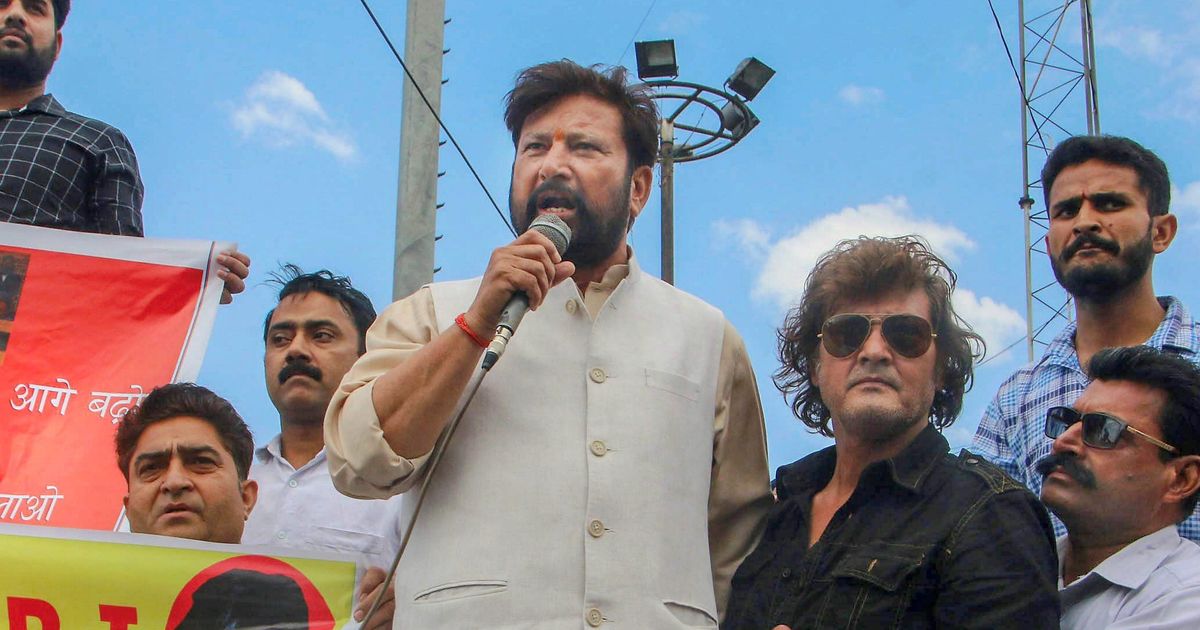 His rallies have attracted impressive crowds and his election campaign revolves around two slogans – separate statehood for Jammu and restoring ‘Dogra pride’ in the region. “He is attracting crowds and his being in the contest is disadvantageous to the BJP,” said a senior journalist from Jammu.

Over the years, both BJP and Congress have been trying to re-invent Dogra politics in Jammu. During the PDP-led government, the BJP even succeeded in passing a resolution in the J&K assembly to declare the birth anniversary of Maharaja Hari Singh a state holiday.

This election, there are four Rajput candidates in the fray from the Udhampur seat – Jitendra of the BJP, Vikramaditya of the Congress, Lal Singh and Harsh Dev Singh of the Jammu and Kashmir National Panthers Party (JKNPP). While Vikramaditya, the son of senior Congress leader Karan Singh, is not a popular name in J&K politics, he is the grandson of Hari Singh – the name at the centre of Dogra politics.

“When other people can use his (Hari Singh) name for political gains, why can’t Vikramaditya do the same? Being the grandson of Hari Singh gives him an obvious advantage over the BJP,” said Choudhary. 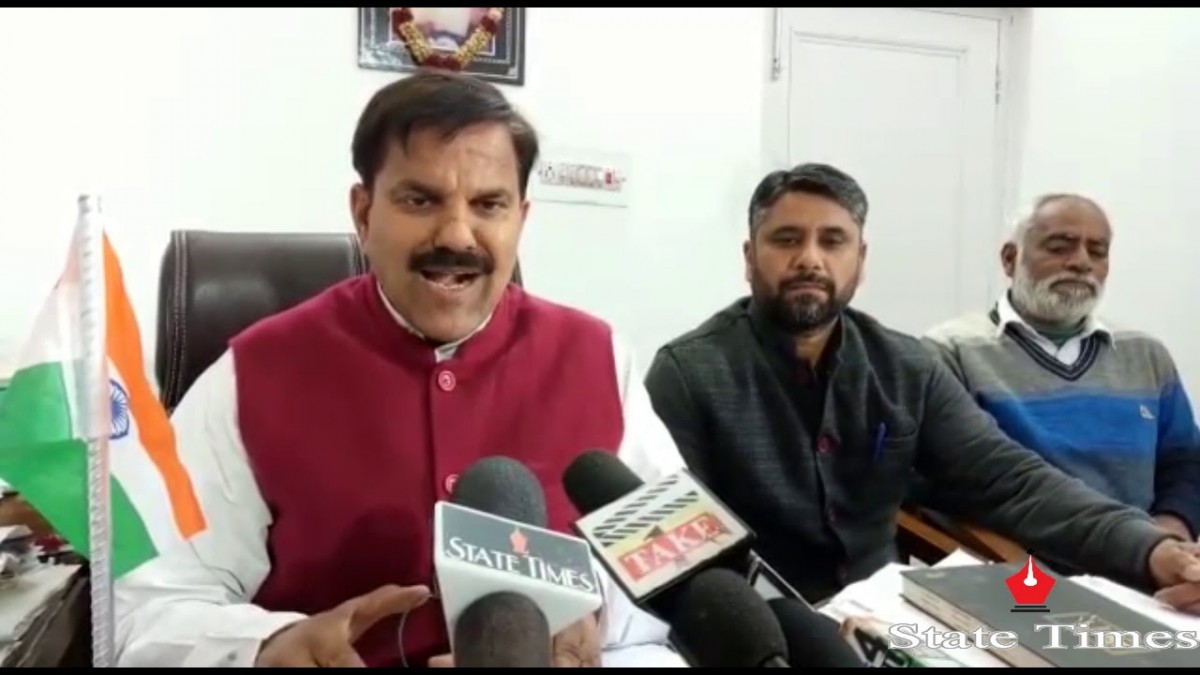 Another worry for the BJP would be JKNPP’s decision to contest both seats. The party lost all the three assembly seats to the BJP in the last election and sees this poll as an opportunity to take revenge.

In their rallies, both Harshdev and professor Bhim Singh, who is contesting from Jammu seats, have been targeting BJP over underdevelopment in the region, deteriorating of the security situation in J&K and the party’s failure to keep the promise of settling Pakistani refugees in Jammu.

During their rallies, both the BJP candidates have been highlighting the “development card” of Prime Minister Narendra Modi and seeking votes for his re-election. However, according to Choudhary, there is little in their own report card to showcase to people, and they are facing “huge anti-incumbency”.

“The party’s former MLAs haven’t lived up to the expectation of people and that has added to its worries too,” he said. Twenty-five of the 36 MLAs in Jammu are from the BJP.

In the last election, Choudhary said, people were least bothered about the candidates in Jammu. “What people saw that time was Modi. Such a thing rarely happens. Today it will boil down to the performance of candidates (MPs) and their record isn’t impressive,” he argued.

In Udhampur constituency, the BJP MP is facing allegations of neglecting four districts of his constituency while concentrating on Udhampur and Kathua districts.

People of Rajouri and Poonch have openly voiced opposition to Jugal Kishore for ignoring the twin districts of Jammu seat. Recently, posters had come up in the districts reading “missing MP”.

When Modi started BJP’s poll campaign from Jammu on March 28, for many it was a sign of the importance the party gives to the region in its poll arithmetic. A battery of top BJP leaders including Amit Shah is scheduled to address rallies in Jammu this week to re-energise its cadre.

This election fervour is, however, missing in the Congress camp. So far, none of its high-profile leaders from New Delhi have addressed any rally in Jammu.

A senior journalist who covered the Modi rally said that while people are disenchanted with BJP MPs, many might end up voting in the name of Modi. “That is an advantage for BJP,” he said.

Besides, there are other factors too. While Congress’s Bhalla is a known name in his assembly constituency of Gandhinagar and some adjoining segments of Jammu district, he doesn’t yield much influence in other segments of Jammu seat which comprises four districts. The decision of senior Congress leader Sham Lal Sharma to quit the party and join BJP is also seen as a setback for the Congress.

The BJP has also termed coming together of Congress, PDP and NC a result of their “sheer frustration”. “It is an admission of the reality that BJP has emerged as a strong force and can’t be defeated,” said party leader Kavinder Gupta.

Also, the elections are taking place in a “polarised environment” post the Pulwama attack and the airstrikes across the LoC, said Choudhary, adding that “BJP knows well how to play its cards in such a situation”.

However, he hurriedly added that the situation was unlike 2014. “Anyone can win. The straight contest between the two sides makes it more challenging for the BJP,” he commented.