The District Development Council elections results will carry a telling political message to all those who have either vociferously supported the Centre’s life-changing moves in Jammu and Kashmir or argued against their people-disregarding high-handedness. 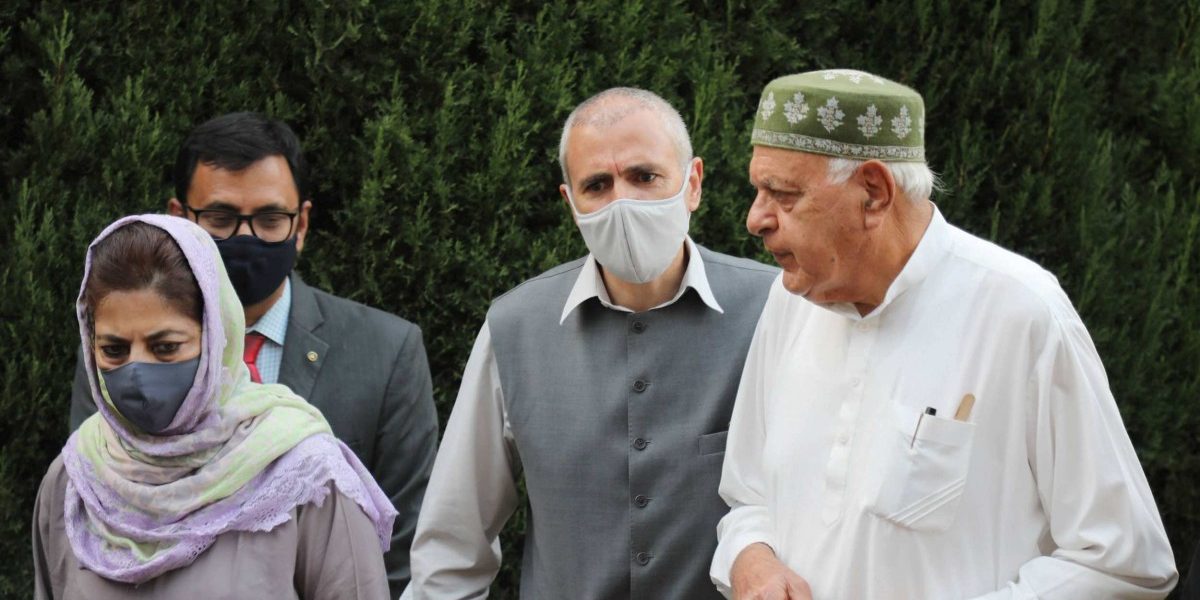 Members of Peoples Alliance for Gupkar Declaration Farooq Abdullah, Mehbooba Mufti, Omar Abdullah and others during a press conference after their meeting, at Bathindi in Jammu, Saturday, November 7, 2020. Photo: PTI/File

The union territory of Jammu and Kashmir seems set for interesting political developments.

In an earlier column, this writer had suggested that the government’s decision to hold elections to the newly constituted District Development Councils (DDCs) may have been conceived as a ploy to downgrade the status of assembly politics, and restrict political activity to disparate bodies at the lower levels. Clearly a stratagem to cut mainstream leaders to size.

If the Centre had calculated that the People’s Alliance would take customary umbrage at the move and announce a boycott of the coming elections to the DDCs, this applecart has been shrewdly overturned by the mainstream conglomerate. Notably, the Indian National Congress has decided to be part of that conglomerate.

In deciding to fight the elections jointly, the Gupkar Alliance has seized the opportunity to reinstate mainstream footprints within the polity after more than a year of stasis.

The fact that hitherto political competitors within the state have resolved to take on the ruling Bharatiya Janata Party cannot be a comforting prospect for strategists who might have hoped to achieve two whammies at once, namely, to shut down the clout of the mainstream parties, and achieve a singular spread of the BJP.

On the other hand, having decided to take the political plunge within the opportunity now offered by a scheming Centre, a heavy and consequential onus devolves on the Gupkar Alliance to demonstrate that their hold among the people remains intact, regardless of the year-long attempt to cut them off from the populace. The risk they undertake cannot be underestimated. Failure to achieve electoral dividends cannot but give the BJP the opportunity they seek to discredit with finality the mainstream as a spent force with no prospect of finding any popular, democratic space to carry forward their agenda to obtain an annulment of the revocation of Article 370.

Contrarily, should their combined opposition to the ruling party and the transformations it has succeeded in effecting in the state result in an electoral rout for the BJP in both provinces of the union territory, the mainstream would have achieved a decisive and far-reaching repudiation of the Centre’s politics vis-à-vis Jammu and Kashmir.

That the Alliance has shown great astuteness in following up on its principled political programme by refusing to hurry into grandstanding is a course that may have taken the ruling dispensation by surprise. It is commendable that the Alliance leaders have taken time to mount a widespread process of interaction and consultation among conceivably every segment of the diverse electorate in both wings of the union territory, and this cannot but ensure that their candidate selection is meant to be democratic and representative. It is hardly to be thought that the BJP would view the prospect of the coming one on one electoral fight with any great comfort, their rhetoric notwithstanding..

One can be sure that the eyes not only of Indians but also of the democratic world will be on the results of the elections to the DDCs. These results will carry a telling political message to all those who have either vociferously supported the Centre’s life-changing moves in Jammu and Kashmir or argued against their people-disregarding high-handedness. Not least, given that the issue of the constitutionality or otherwise of the abrogation of Kashmir’s special status remains pending in the highest court of the land, the results of the elections to the DDCs will have the potential to influence the judicial mind, and act as a gloss on the wisdom of having put off a judicial determination for months on end, giving the Centre the opportunity to effect a fait accompli.

Should the Alliance succeed in proving a democratic point in the projected elections, many repressive realities both at the level of the government and the populace at large may come to see rethinks of a major dimension.

Not having anticipated what the Alliance has now chosen to do, the only options the powers-that-be may have are, one, to engineer a result, or, on some pretext, to call off the elections altogether. Neither option now seems easy of accomplishment.

The Centre may hope that a plank of “security threat” may yet take the Kashmiri imagination hostage, but this will be hard to square with the contrary claim that things there have improved beyond leaps and bounds. Given that the new land laws have outraged Kashmiri of every hue – Dogras, Pandits, Ladhakis, Kargiilis, Gujjars, Bakerwals – the electorate at large may well seize the opportunity to register a rather stunning assertion on behalf of the anguish they feel at the other security threat, namely, the one to their identity and privilege as natives of the region.

That the mainstream Alliance has opted not for any ill-thought or violent recourse but reaffirmed their faith in the representative, democratic process has not gone unnoticed. Also, the fact that all sections of the state’s population, regardless of ethnic divisions, have come to sense a common destiny in pushing back on the ever-compounding policy of grab may have registered a reality far in excess of sectarian allegiances, may come to be a determining factor in the way in which Kashmiris across the board stamp their preference as they vote in the DDC elections.

There is reason to believe that sections of opinion among Kashmiris who have traditionally decried electoral politics as simply a concession to India may think twice before obliging people to desist from the coming franchise; and, if anything, in their own ways, encourage a freer and more numerous mandate – a prospect that could bring the separatists and the mainstream closer together than they have ever been.

Altogether, a fascinating exercise might be in the offing in the beleaguered state after more than a year of political suffocation and undemocratic clampdown.

That all segments of the Gupkar Alliance have taken their stand on their continuing loyalty to Gandhi’s India and interpreted the violence on all sides as a consequence of a betrayal of the Gandhian promise gives the Alliance a solid moral force.

It is the government of the day that will have to prove whether it still remains committed to the vision that Gandhi had of and for the Muslim-majority state of Jammu and Kashmir. And whether a Hindutva-run India still means to hold fast to the sanctities of the Constitution that Ambedkar and Nehru formulated, and by which the Gupkar Alliance continues to swear.