The Illusion of a New Politics in Jammu and Kashmir

The goal of furthering an illusory politics in the state is sought to be realised in two ways: by floating a congenial group at the top and encouraging a stir among panchayats. 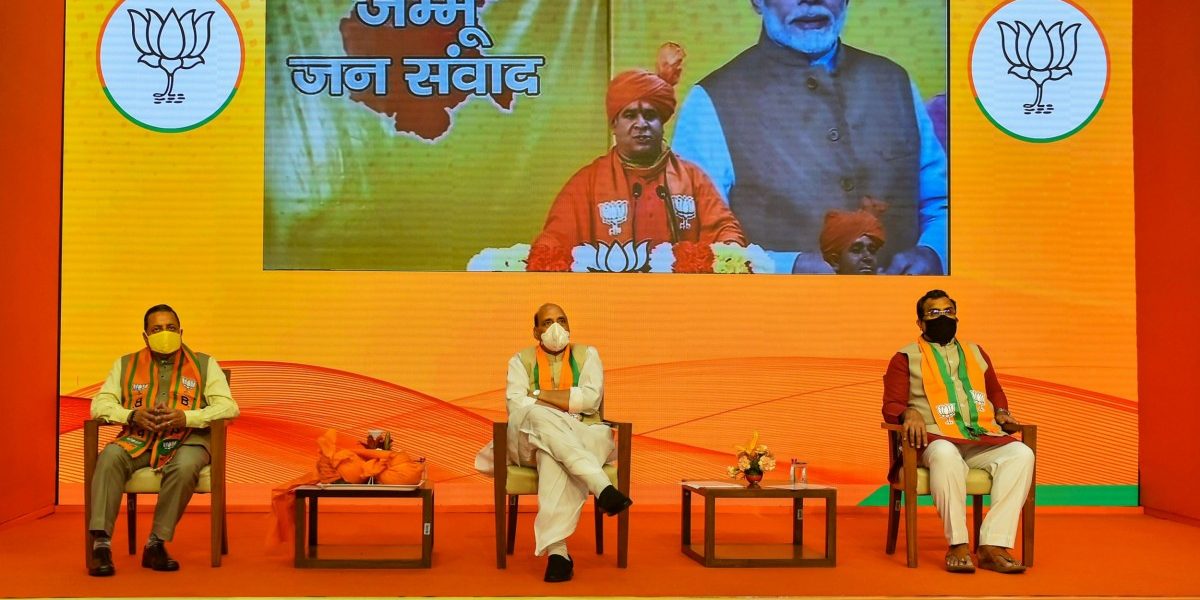 One cannily peddled discourse about recent events in Jammu and Kashmir has been that the nationalist regime at the Centre wished to bring about a new, people-oriented politics in the state. The insinuation was that traditional political parties had become decrepit and unrepresentative.

The barely concealed propagation was that the dominant Kashmiri leadership had milked Indian constraints too long and used the abrogated Article 370 to maintain a profitable distance from the claims and clout of the Centre. And that all this had made it possible for them to relegate the Jammu province due to the hegemony of a Valley-centred projection of what the Kashmir issue was about. This polarised reading of the modern history of Jammu and Kashmir, for example, entirely overlooks the little-mentioned fact that historically, one reason for the trans-state hegemony of the National Conference has been its hold among the lower castes in the Jammu province.

Thus, a two-pronged tactic was unleashed: shut off normal political activity in the state at the higher levels by incarcerating the top leaders of time-honoured, mainstream political parties, and impose unelected rule answerable not to the people of the state but the government at the Centre.

It remains an unanswered question as to why political leaders who, presumably, were past their expiry date and had little hold among the people any more should have been put away, given that, according to the Centre’s propaganda, nobody listens to them anymore. This conundrum has expectedly also been at the heart of much democratic anxiety about the state, both among political thinkers within India and concerned individuals and organised political opinion in democratic countries elsewhere.

The Indian government, as we know, has chosen to share the situation in Kashmir with only such representatives from abroad who belong largely to a congenial right-wing politics, and disallowed others from entering the state to see things for themselves without being chaperoned by state agencies.

Most rational observers have remained askance at the contrary stipulations: that all is normal in the Valley but a heavy clampdown must be continued, comprising a refusal to the public of their constitutional right to peaceful assembly and protest (belying the fruits of total integration with the Union post abrogation of Article 370), and the right to communication channels commensurate with the rest of India.

A concomitant plank of the new tactics (as to strategy, it has always been to deny autonomy to the state, however negotiated with universal consent, and lawfully codified, subjugate the region to central fiat, and clip the wings of the Muslim-majority Valley) since the watershed day of August 5, 2019 has been to prop up alternate groups whose politics would now be focused on everyday quotidian niggles rather than on any issues related to and deriving from the history of political arrangements between the Centre and the state.

That most development indices in the erstwhile state were factually well ahead of even those in Gujarat was sought to be deflected by relentless propaganda about the state’s so-called backwardness. Part of that propagation has been the charge that mainstream political leaders have had their hands in the till, copiously furnished by an obliging and complicit Centre prior to 2014. It may be noted that thus far no proof to support such allegations has been forthcoming.

The goal of furthering an illusory politics in the state is sought to be realised in two ways: by floating a congenial group at the top who may now be expected to ask the questions the Centre is amenable to answering, and encouraging a stir among panchayats, so that candidates victorious either without contest or by single-digit majorities from less than a hundred polled votes may henceforth come to represent a new, grassroots politics aligned with the salutary, nationalist aims and purposes as laid down by an unelected administration at the top.

Curiously, however, these brave women and men at the hinterland levels who are expected to shoulder the burden of generating a new, credible politics in the state remain bereft of the sort of security cover that may enable them to go freely and on a sustained level of interaction about their job.

For example, the killing just the other day of the brave young Pandit sarpanch, Ajay Pandita Bharati, raises more than a suspicion that the administration may not be as serious about ensuring the success of this new, grassroots political effort as it trumpets (remembering that panchayats in the state have functioned in far more credible and numerous ways in years before the takeover of the state by the ruling dispensation).

After all, the success of a Kashmiri Pandit in the hinterland politics of the state would not but have sent most salutary signals – that normalcy had truly returned, that Pandits were as little or more safe in the Valley as Kashmiri Muslims, that the Centre was indeed committed to the return of the migrant Pandits, that the claims of the post-abrogation administration of wishing to infuse politics in the state with a new authenticity and vigour. Contrarily, the killing of Ajay Pandita only suggests that either the administration remains inimical to the emergence of non-BJP politicians, giving them no security, or, more ominously, is only interested in creating an illusion that political activity is back in the Valley.

In leaving panches and sarpanches to their own fate in a situation where armed militancy clearly seems on the rise, the indifference of the state seems to coincide with the intent of the militants not to allow any democratic political activity, and not to permit Pandit Kashmiris to relocate within the Valley. Ironically, a law and order approach seems to suit both the state and those challenging its legitimacy.

Meanwhile, one doesn’t quite know how the ruling political forces mean to handle the complaint made by some leaders among the Pandits that the delimitation exercise from now on leaves them in the cold, since it is based on the Census of 2011 when they were no longer in the Valley.

The deeply meditative and philosophical Kashmiris, now for a whole year nearly, have learnt to meet the pall of hopelessness that hangs over their lives with a stoic resilience that bespeaks their profound immersion in Sufi spiritualism. The hopelessness no longer seems like a lid covering a boiling pot, but a pot gone cold and lifeless.

This may be the “normalcy” that the right-wing administration at the Centre thinks is most suited for Kashmiris, while people like the Nagas, never willing to acquiesce, deserve to be negotiated with as equal partners to a peace with dignity and autonomy.

We live and learn.