The 'Unholy' Alliance May Be Over, But There Are Still Dark Days Ahead for Kashmir

The BJP's project to impress communal Hindus in order to win them over electorally began long before the rug was pulled under the feet of Mehbooba. 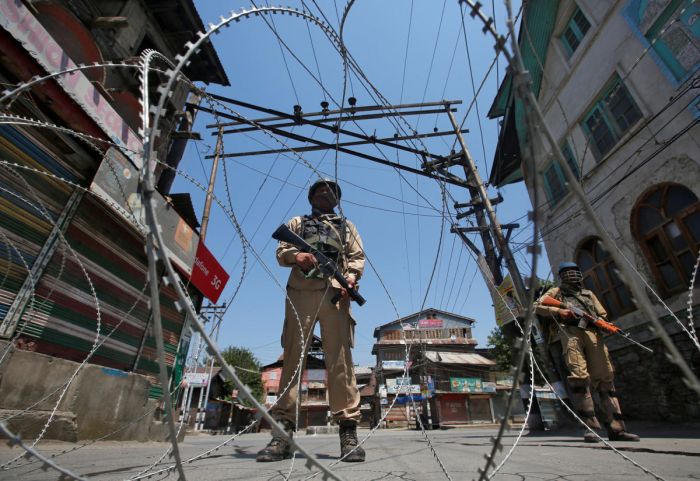 There is no golden dawn at the end of the inglorious People’s Democratic Party-Bharatiya Janata Party interregnum in Kashmir, but at least the long night is over.

Uncertainty and foreboding mark the foreseeable future. This is because the BJP still rules at the Centre, and under governor’s rule it will be calling the shots with renewed communalist and militarist fervour, if that is the trajectory it reckons will suit its interests.

In determining that, its consideration will not be limited to Jammu and Kashmir, or more particularly the state’s Hindu-majority Jammu division. After all, there are only two Lok Sabha seats in Jammu.

The saffronites are more likely to be concerned with the rest of the country as we slip into an election year and the BJP finds it expedient to project a macho, false, so-called “India First” image even after it has opened up the Kashmir Valley to a fresh and long bout of terrorist depredation by Pakistani jihadists and their cohorts in the Valley.

With Mehbooba Mufti’s virtual sack and the perfectly planned introduction of direct rule from the prime minister’s office, with national security advisor Ajit Doval playing Modi’s jack, the saffron party will not have to contend with the paradoxical situation of an acquiescing state-level partner in the PDP that also raised uncomfortable questions from time to time.

This means the BJP may now run the show any way it likes and allow its “muscular” but mindless, and dangerous and morally hollow, policies unhindered play at the expense of the peace-craving population of Kashmir.

In the worst case scenario, these policies may begin to resemble what Israel is doing to the Palestinians, as there are scarily close similarities between Benjamin Netanyahu and Narendra Modi. Such policies will suffocate the Kashmir Valley, cause India immeasurable harm and earn this country regional and international odium.

There is fortuitously a reasonable chance the damage can be limited to a year as Modi’s prospects for the next parliament elections seem far less assured than what his cronies pray for. At least that seems the emerging sense in the country. That is the saving grace.

In a fundamental way, the Modi rule in Kashmir has been different from what went before, and that’s been the basic cause of the mess things are in. It is in this period that the “Hindu” factor was injected with cold calculation for the first time. New Delhi overlooked the fact that India was a democracy. It trampled underfoot the well-acknowledged understanding that Indian culture was a multi-faceted wonder that was not overrun by a particular factor – religious or linguistic. It also ignored the inherent syncretism that pervades all aspects of life in Kashmir, including the religious, which the jihadists are seeking to overturn.

With RSS-BJP’s ingrained communal reading of history, society and politics, New Delhi made “Hindu India” confront “Muslim Kashmir”. The first disturbing sign of this came in 2015, not long after BJP got into government in J&K for the first time.

When trouble broke out between groups of students at a technology institute in Srinagar over a trivial matter, the Centre removed the J&K Police, which was doing a fine job tackling the situation, and inserted the CRPF. The CRPF also did a professional job. But the triumphalist statements of the Sangh parivar elements of the time let down the central force by darkly expressing satisfaction that a Hindu force would teach the Muslims a lesson.

A year on, then defence minister Manohar Parrikar turned out in RSS uniform while on a visit to Jammu, mocking the spirit of democratic India. Parrikar’s devotion to political Hinduism was widely noted in the Kashmir Valley. It would, of course, have been far worse if Modi had done the same. The repercussions would have been felt far and wide. But Parrikar’s touching fidelity to his real cause did not leave the Kashmiri unscathed.

Now that he is no more, his name can be revealed as there is nothing shaming in the context. The late Shujaat Bukhari, the editor who sought moderate ground, preached dialogue and engagement, and was mowed down for his pains in a targeted assassination in Srinagar just before Id-ul-Fitr, had made it a point to note the deliberately provocative act of the defence minister in a contemplative, off-the-record conversation with a group of journalists from Delhi visiting Srinagar in November 2016. The findings that emerged provided the core of a published report afterward.

In the same meeting, another senior editor narrated an incident which goes to the heart of the matter. He said he once spotted a 70-year-old man in a crowd of stone-pelting youth. Utterly surprised, he asked the elderly protester why he was in a throng of hot-headed youngsters, and was humbled by the response. The old man just said, “Politics and police and military action are one thing, but I don’t want a teeka (a Hindu-signifying vermilion mark) forcibly planted on my forehead.”

The Modi regime has scrupulously avoided the politics of engagement in Kashmir, but it has without inhibition played politics of another kind – a politics to be the vehicle for its ideology which it thinks will brighten his party’s electoral prospects as well.

The old man pelting stones is evidently wrong in a literal sense, for even Modi, who has skidded from one failed policy to another in his four years, wouldn’t dream of the reckless enterprise of embarking on a mission of religious conversion in Kashmir. That would be too risky. His calculations are less ambitious – to persuade Hindu India that he is being tough, real tough, dealing with Muslims, and bad, real bad.

The project to impress communal Hindus in order to win them over electorally began long before the rug was pulled under the feet of Mehbooba.