Jaipur Is Doing Many Things to Do Well on Swachh Bharat Survey, But Cleaning Isn't One of Them

Volunteers hired by an event management company are being used to make sure citizens give the kind of feedback the government wants. Jaipur: The Jaipur Municipal Corporation (JMC) has hired an event management company to make sure that the city performs well in the Narendra Modi government’s Swachh Survekshan – a survey to rank cities on various sanitation and cleanliness parameters.

The company, called Impressive Events Hub, has deployed approximately 100 college-going students as ‘volunteers’ for a month, giving them Rs 9,000 to “create awareness” among people by making sure that they fill a swachhata pledge form (that carries their details – name, address, ward number, mobile number and email address), download the Swachhata app and “properly” answer the six questions that will be asked during the survey.

Data from the details in the pledge forms filled by residents, schools, hotels, hospitals and markets is being collected and submitted to the municipal corporation. However, it is not known if there exists any restriction on the event management company being allowed to sell the data to a third party.

“Each volunteer is assigned a ward that he/she has to take care of. We go to residences, schools and markets in our area and ask people to fill the pledge forms and download the Swachhata app. We need to click pictures of the phones after the download and send them to our team leaders every day to prove that the app was downloaded,” Ruchika, a volunteer with the company, told The Wire.

Speaking to The Wire, Vinod Kumar Jindal, joint secretary and mission director, Swachh Bharat Mission (SBM) said, “There is no such guideline on outsourcing the survey work, but if the urban local bodies don’t have sources then they will have to hire somebody.”

69% marks for cleanliness on paper

The survey is divided into three parts and the maximum score possible is 4,000. Part one, called ‘service level progress’, carries 1,400 marks for 44 questions based on garbage collection and transportation, processing and disposal, sanitation, behaviour change, capacity building and innovation. Urban local bodies are supposed to provide data supporting these answers, and the survey agency will randomly pick a few samples to verify the claims and give marks set against each question. In case the data doesn’t match, only 31% marks will be deducted – so 960 out of 1,400 marks will still be given if the paperwork turns out to be fake.

When asked about this, Naveen Kumar Agarwal, additional mission director, SBM, told The Wire, “Basically, it is just a promotion thing. We are not giving a job to anyone.”

Part two, ‘direct observation’ carries 1,200 marks. The assessors will pick places from the submitted data – 12 or 24 (depending upon the population, 12 places if it’s below five lakhs and 24 if it’s above) residential areas, 12 or 2o public toilets, eight or 16 commercial areas, eight or 16 vegetable/fruit/meat market and catchment area of the main railway station and bus station of the city to observe their situation. The assessors are strictly advised not to interact with anyone at the time of assessment. “The survey agency would randomly pick samples from the data supplied by the ULB, both for conducting direct observation [part 2] and gathering citizen feedback [part 3],” said Agarwal.

Part three, called ‘citizen feedback’, carries 1,400 marks for six questions to review the sanitation and collection services in the city. Feedback is taken from a sample of 0.1% of the city’s population – whose phone numbers are to be provided by the urban local bodies.

Misuse of the Swachhata app A complaint posted on the Swachhata app. Credit: Shruti Jain

Complaints posted to the Swachhata app, an official app of Ministry of Housing and Urban Affairs, are handled by the ‘volunteers’ by means of another app called ‘SBM – Engineer app’. This app is designed solely for registered sanitary inspectors to get the pictures and locations of the issues reported by citizens, and upload photos of the resolved issues within 24 hours.

“Each volunteer is assigned a ward and their phone number is registered by the JMC to access the SBM – Engineer app. As soon as a complaint is received on the app from our ward’s location, we guide the sanitary inspector to resolve the issue and then we are required to upload the clean picture of that location within the time frame. If the complainant doesn’t give us feedback upon resolution, we call them to get that,” said Devendra Sharma, another volunteer.

While the efficiency of complaint resolution has improved after company volunteers became involved, it is difficult to say whether this will be maintained when the volunteers’ working period comes to an end on January 14. The sanitary inspectors have no idea how the application operates.

“Does any application of such a kind exist? We usually work on the complaints sent to us on paper from the JMC or our ward,” Mahesh Pandey, sanitation inspector of ward number 10, told The Wire.

Asked whether the volunteers can be allowed to use an application meant for the sanitation inspectors, Vinod Kumar Jindal, joint secretary and mission director, SBM, said, “I’ll take up the issue in the next video conference and make sure that nobody apart from the sanitary inspectors is allowed to access the SBM – engineer app.”

Some citizens have complained that their complaints are marked as ‘resolved’ even if the area is not cleaned.

With the initiation of daily door-to-door garbage collection in the city, dustbins that were placed in every locality have been withdrawn. Now, in case one misses the van that comes once in the day, garbage has to be stored overnight.

“Door-to-door collection and provision of garbage bins can’t go hand in hand. The major problem with those bins was that they were the hub of dirt in the city. Provision for a facilitation and collection-cum-sorting centre in a ward is planned so that people who couldn’t throw their garbage in the van could throw it here,” said Jindal.

Swachh Bharat only for the rich

In a recently-created dumping ground in Jaipur’s 20-year-old Alka Theatre kachi basti, about 50 families are compelled to co-exist with the garbage. Door-to-door garbage collecting vans dump the areas’ garbage here, and it is later collected again and taken to the Sevapura landfill in the city. 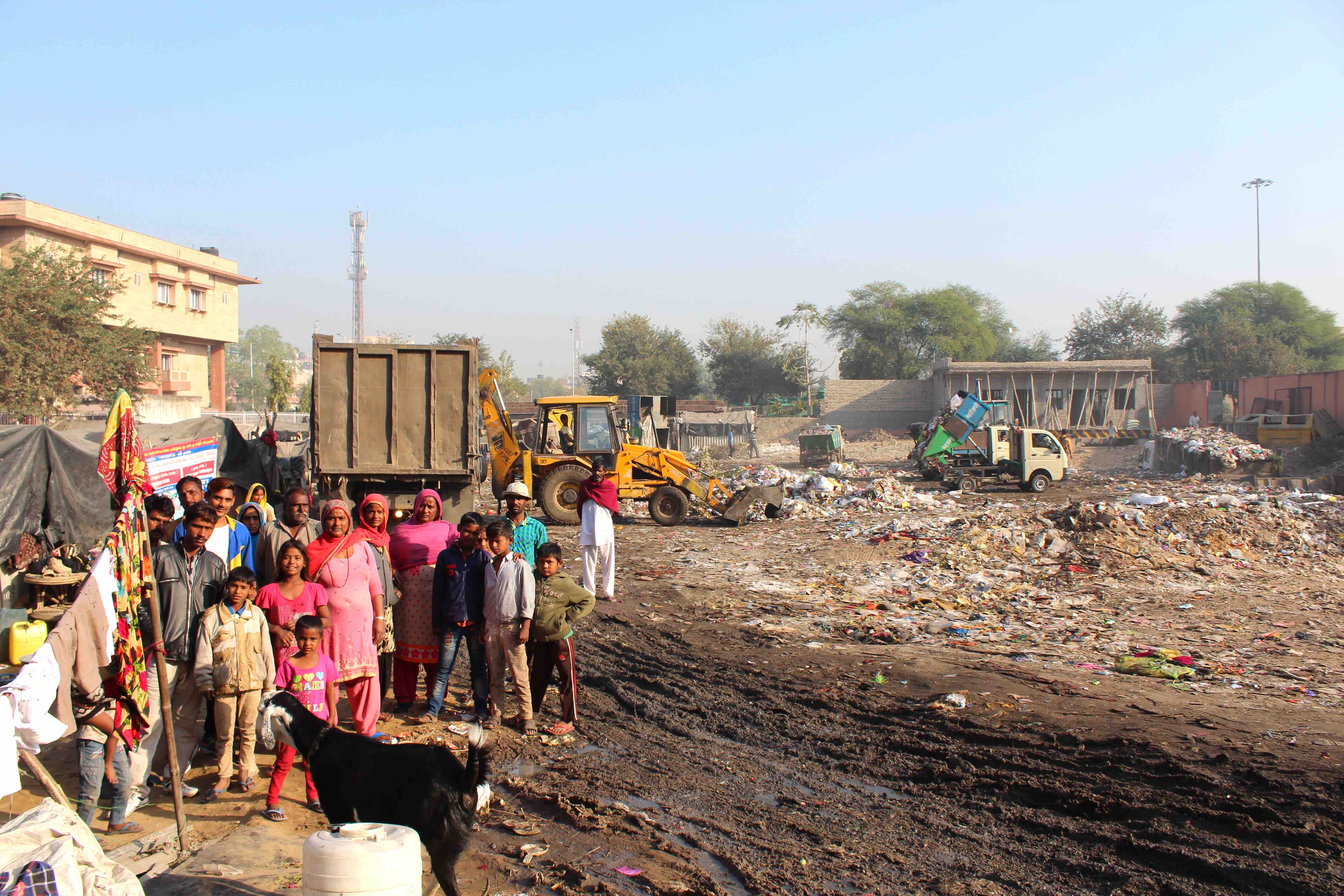 “So many times we have written to the authorities to give us a different place to stay as our school-going kids fall sick in the dirt. They tell us to shift to Sevapura, again a dumping yard,” Rukmani (45), a resident of the basti who works as a boot polisher, told The Wire.

“If they say they want to live in the chief minister’s house then that is not possible,” responded Samta Choudhary, councillor of ward number 10.

Constructing toilets is easy, maintaining them is not

Madanlal came out to use the community toilet, as the single toilet in his house was occupied by his daughter-in-law, but he couldn’t use any one of the six community toilets as they were not flushed.

“There are about 500 jhuggis and about 1,500 people in this basti. Also, close to it is a vegetable market. Thousands of vendors stay in this area from early morning till evening and we have only six community toilets whose water tank is filled only once a day. By morning, the tanks are always empty. How can we use these toilets if they are not flushed? If we go out in open then they fine us Rs 200,” said Madanlal, a resident of Fauji basti.

Kailash and Shambu Swami of the Fauji basti were fined Rs 200 recently for defecating in open.

“They cannot take care of the cleanliness of the community toilets 24×7 but will monitor us going out in the open and fine us,” said Kailash.

Having to construct toilets without adequate money from the government is also a challenge for people staying in slums.

“We have received only Rs 4,000 in our accounts and the inspector says the next instalment would come only when we start constructing the toilet. They say a toilet without a flush system can work initially as they only want to click pictures, but even that doesn’t come in Rs 4,000. The cost of digging a sewer trench is Rs 3,500 on its own, forget anything else,” said Ramdhan Naik, who has spent about Rs 10,000 to construct a toilet without a flush.

Officials say the payment can’t be made in one go in order to ensure that the funds are utilised only for toilets.

“The central government pays Rs 4,000 to the verified applicants for toilet construction, and Rs 8,000 is paid by the state governments after the geo-tagged photo of the toilet is uploaded on our portal in three stages – plot of land where the toilet is to be constructed, partially-constructed toilet and fully-constructed toilet – to curb corrupt practices and to ensure that the money is utilised only for toilet construction,” said Jindal.

Though the six community toilets are divided into four for women and two for men, hardly any women use them.

“The community toilet is surrounded by men in the morning. How can we go with them? Had the female toilets been built at a different location, we could have used them,” said Rakhee Bajrang (32), another resident of Fauji basti.