Is the 'Azadi' Narrative Gaining Steam on Both Sides of the LoC?

The high-handedness of both India and Pakistan might bring people of Jammu and Kashmir – who had little common ground – to a similar platform. 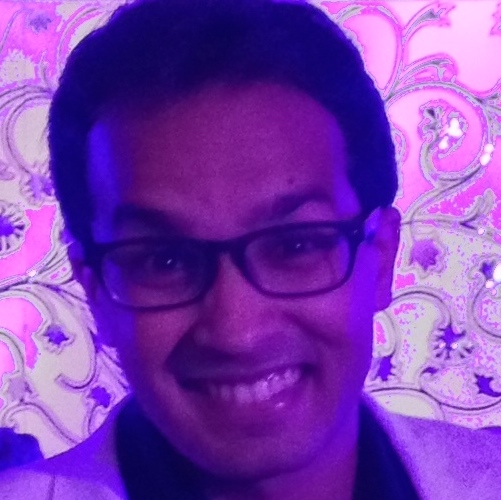 The effects of the revocation of Article 370 have been felt on both sides of the Line of Control (LoC). India-administered Kashmir a hotbed for pro-independence sentiments was merged with the Jammu division to form a single union territory. Ladakh has become a distinct political unit despite some inter-provincial differences that need to be ironed out.

On August 26, the “azadi” narrative re-emerged in Muzaffarabad, Pakistan-occupied Kashmir (known as ‘Azad’ Kashmir in Pakistan). This narrative of asking South Asian rivals to relinquish control of their respective parts of Kashmir is one that India and Pakistan have always equally eschewed. The JKPNA, a coalition of pro-independence parties, is the entity that somewhat revived this narrative.

Tanveer Ahmad, an independent researcher and policy activist from Dadyal in the so-called ‘Azad Kashmir’, states: “The internal or independent narrative has been strong for decades but it is still difficult to speculate about the future as the floor is wide open after the BJP’s seemingly unilateral move on August 5.”

The NAP and its student wing, the NSF, are among many demanding an independence option in a plebiscite to decide J&K’s future. Last weekend also saw the Kotli chapter of the Jammu Kashmir Liberation Front, a member of the PNA, lead the freedom march to the LoC. Naturally, the authorities did not take kindly to this procession.

Use of brutal force against political workers marching peacefully is a blatant violation of fundamental rights. The Govt of Pakistan and Azad Kashmir must stop gross violations of human rights and let the people complete this event peacefully on the border of divided Kashmir.

Former NSF activist and the current president of the NAP’s UK branch, Sajjad Raja says two factors were responsible for this coalescing of independence factions that were otherwise divided. “India scrapping Article 370 and the Pakistani establishment still deeming “freedom” as full accession to the Muslim-majority state has reinvigorated this ‘azadi’ sentiment.”

He is quick to quote a phrase that describes Pakistani mainstream attitudes towards those living in J&K who aren’t beholden to New Delhi and Islamabad: “Hindustan se maango to ‘azadi,’ Pakistan se maango to ‘ghadaari (Freedom from India is freedom, freedom from Pakistan is treason).” Before the scrapping of Kashmir’s last vestiges of autonomous existence, the separatist and pro-autonomy factions had their political identities as stakeholders. The same cannot be said across the LoC.

For instance, part 2 of Section 7 of the 1974 Azad Jammu and Kashmir Constitution explicitly states that “no person or political party in Azad Jammu and Kashmir shall be permitted to propagate against or take part in activities prejudicial or detrimental to the ideology of the state’s accession to Pakistan.” Section 5 (2) (vii) of the AJK Legislative Assembly Election Ordinance, 1970, likewise states that “a person will be disqualified for propagating any opinion or action in any manner prejudicial to the ideology of Pakistan, the ideology of the state’s accession to Pakistan or the sovereignty and integrity of Pakistan.”

Hence, perspectives that deviate from the clauses of the interim AJK constitution rarely get to see the light of day. “Only under the alias of Abdullah Kashmiri could I write the manifesto and constitution booklets of my party,” Raja says.

Such is the scope of political activity for independence proponents in PoK.

The JKNAP UK president adds, “Alongside India’s recent high-handedness, foreign minister Shah Mahmood Qureshi chanting, ‘Kashmir banega Pakistan (Kashmir will become Pakistan)’ in the national assembly has further fomented the independence narrative that was already present not just in Muzaffarabad, but also in cities like Kotli, Poonch, Rawalakot and Bagh.”

The JKLF will again lead another protest on October 4. 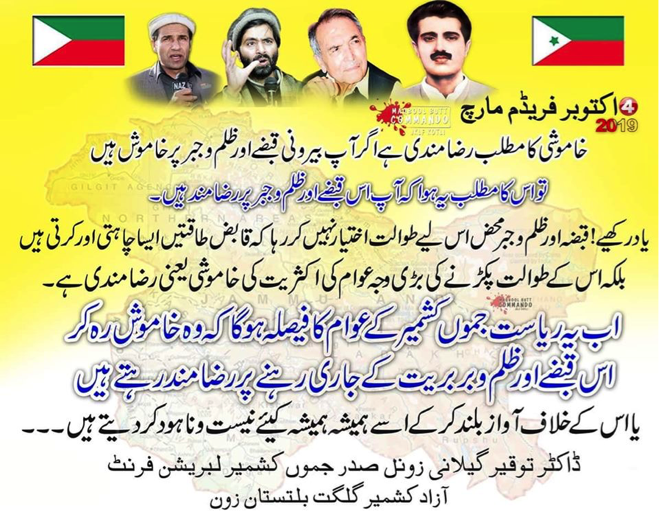 A poster advertising the JKLF’s protest next month

Back in the religiously and ethno-linguistically diverse regions of Indian-administered Kashmir, there was a clampdown not just in the Valley but in the Jammu province as well – be it those who deemed ‘azadi’ as the full restoration of the watered down and now scrapped provision or the pure secessionists.

Notwithstanding present-day restrictions, there has always been comparatively less censorship of dissenting views in India. Although things have changed with the brief detention of a former minister from Jammu and an anti-Article 370 crusader, Gulchain Singh Charak.

Also read: Is Kashmir a Domestic or International Issue?

Charak’s only crime was that he contributed suggestions to safeguard his Jammu region’s identity amidst the state bifurcation. Jammu Kashmir National Panthers Party leader, Harsh Dev, was taken into custody for defying his house arrest. A nationalist like Charak, the government didn’t like his demands for keeping Jammu attached to its former hegemon Kashmir.

Although, pan-Kashmiri nationalism never had any legs to stand on; people of the Gilgit-Baltistan portion of PoK have always steered clear of the imbroglio while regions on both sides of the LoC have harboured different aspirations.

Of course, the narrative for a united, independent Jammu and Kashmir is also not without its geopolitical caveats. Yet, the current Indian and Pakistani government’s continued positions on the issue post the scrapping of Article 370 may or may not incite a nationalistic fervour – one that cuts through religious, ethno-linguistic, geographic and historical fault lines.

Therefore, the high-handedness of both countries might bring people of Jammu and Kashmir – who had little common ground – to a similar platform. Although it remains to be seen whether India and Pakistan will evaluate past and present policies on Kashmir, as alienating even the Jammu’s nationalists might have long-term consequences.

Daneesh Majid is a freelance writer on South Asian culture and security with a masters in South Asian area studies from the School of Oriental and African Studies in London.