The binary between an unwise and ignorant Rahul Gandhi versus a wise and erudite Narendra Modi is the result of the most gigantic PR exercise that democratic India has seen. In the last four years, since Narendra Modi became prime minister, if there is one narrative that has become common sense it is that Rahul Gandhi is unintelligent and ill-informed, a “Pappu,” and thus naturally unfit to become the prime minister.

The latest example is when Rahul became the butt of jokes on Twitter and #AccordingToRahulGandhi trended a few days ago when he suggested that the person who started Coca-Cola in the US was a lemonade seller.

The flipside of this relentless mocking of Rahul’s intellectual ability is the logical corollary: the man that Rahul seeks to displace, Modi, is not only a brilliant orator, but also a brilliant mind and intellect.

This binary narrative is driven by the Sangh propaganda machinery (for many news items like “potato factory” “coconut juice’’, “petrol—Rs. 80 per Kg,” about Rahul’s unintelligence are also fake/morphed), the BJP government’s publicity department which has spent over Rs 4,000 crore in building up the Modi aura, Modi himself who called Rahul a child obsessed with “balloons and toffees” and a completely subservient mainstream media which uncritically laps it up.

In this narrative, while it is possible to admit that Modi might be a “feku” (somebody who makes tall promises or exaggerated claims with little relation to reality), it is impossible to conceive that he can be a Pappu.

For instance, while the mainstream media covered Rahul’s Coca-Cola gaffe, it not only “blacked out” Modi’s serious mistake of spelling out the acronym STRENGTH as STREANH recently in China, but also rectified his mistake while reporting it (Modi got the spelling wrong twice: second time as STRENGATH).

Now, this is a mistake borne out of a lack of proficiency in English (just as the mistake of Modi addressing the wife of President Sirisena of Sri Lanka as M.R.S. Sirisena instead of Mrs Sirisena). And English-language proficiency is not required to be the prime ,minister of India; in fact, it is necessary to have more prime ministerial candidates from outside the English-speaking elites of the country. But what is seriously disturbing here is Modi’s penchant to indulge in the inane and school-boyish game of acronym-coining not just when addressing popular crowds, but also when holding delegation-level talks with President Xi Jinping of China.

In the Karnataka election campaign, Rahul became the subject of viral jokes and media coverage when he fumbled while pronouncing the name of M. Visvesvaraya. Modi himself ridiculed him by asking to learn the name by repeating it “at least five times.” But Modi himself slipped-up and mispronounced Kudala Sangama as Kundala Sangama. And as expected, there was no media coverage.

Over the years, Modi has made gaffes of all kinds. The visibility of these has become very little because of the skewed media focus since 2014. Recently, he referred to Gandhi as “Mohanlal” Gandhi. One can understand an occasional slip of tongue. But this was the third time that he has got the father of the nation’s name wrong, quite extraordinary for the prime minister of the country.

Modi has made blunders about historical and development facts: Chandragupta belonging to the Gupta Dynasty, confusing his own ideological progenitor and none less than the founder of Jan Sangh, Syama Prasad Mookerji, with somebody else, Alexander being defeated by Biharis, Taxila being in Bihar, Konark Temple being 2,000 years old, and short skirts existing at the time, China spending 20% of its GDP on education, confusing the sizes of Shanghai and Delhi, and so on. This is in addition to the regular erroneous assertions (possibly deliberate) about Jawaharlal Nehru, Sardar Patel, etc.

Then you have the Modi statements like ancient India had genetic science and technology for head transplants, and writing a foreword to school textbooks in Gujarat which teach that Rama flew the first plane and that ancient India had stem cell technology. No Indian prime minister before Modi has promoted such blatantly unscientific claims in a nation which is anyway steeped in superstitions.

Equally embarrassing and serious is Modi’s lack of knowledge about our planet’s greatest challenge, climate change: “Climate change? Is this terminology correct? The reality is this that in our family, some people are old …They say this time the weather is colder. And, people’s ability to bear cold becomes less.” Or the shocking attribution of Gujarat’s malnutrition to figure conscious girls, the misogynist comment that “I am happy that Bangladesh Prime Minister, despite being a woman, has declared zero tolerance for terrorism” and patriarchal notions of women and gold, etc. 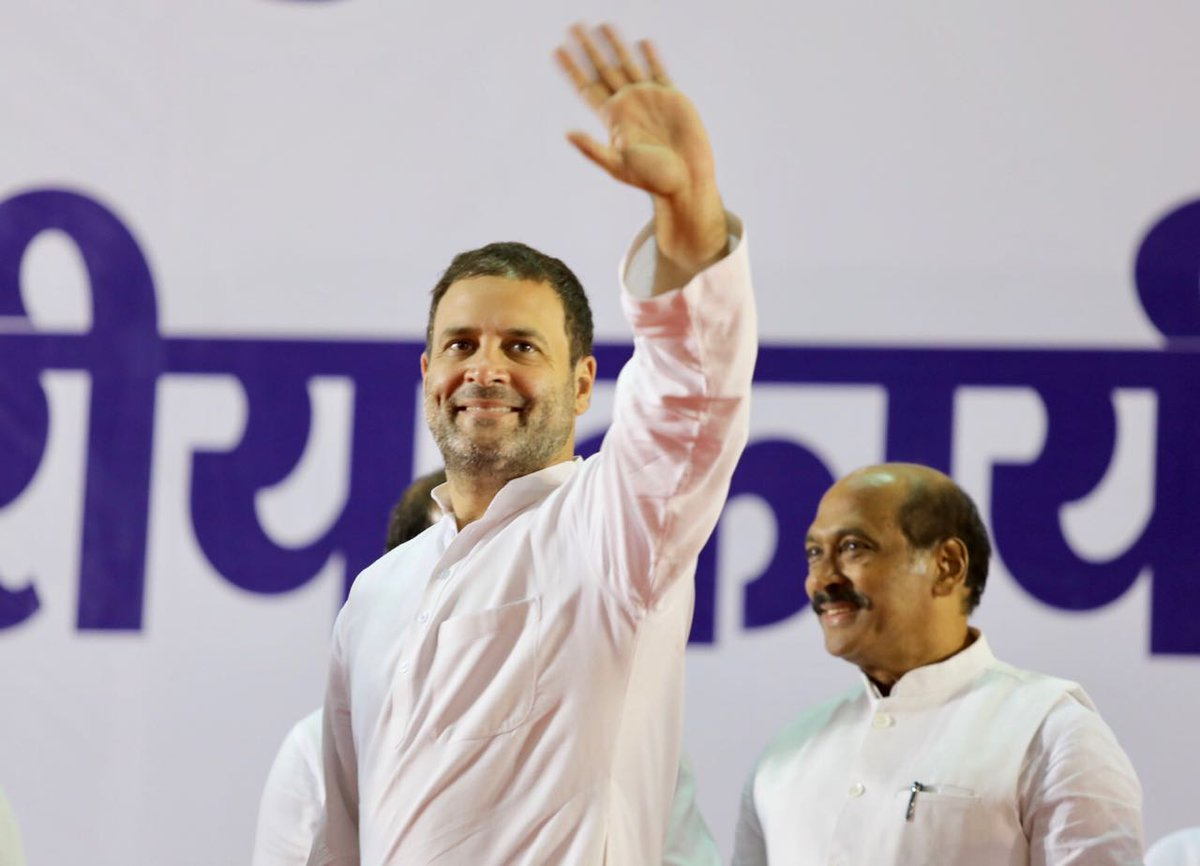 None of Rahul’s mistakes, many of which arise from his diffident public-speaking and mediocre command over Hindi, while providing comic relief, have attained the seriousness of Modi’s mistakes and views.

Modi’s reference to pakoda-selling as a job similarly betrayed a depthlessness about India’s gargantuan economic problem of unemployment.

Despite the government and the media’s relentless marketing of Modi’s supposed spontaneous and unscripted interactions, their reality too was exposed a few days ago in Singapore when the prime minister’s interpreter read from a pre-scripted interview answer-set. There was little interest for the mainstream media in reporting or criticising this, despite Rahul himself tweeting about this major faux pas. What was striking was the answer that Modi gave to the question about Asia’s main challenges and the ways to resolve them: “The biggest challenge is that do we Asians feel that or not?” This is while the interpreter listed at least 15 challenges that Asia faced, and which Modi forgot to mention.

If we analyse the content of Modi speeches beyond the theatrical oratory, vacuous generalities and superficialities abound. They are rife with, like his speeches to NRI audiences abroad, polemics mocking the Congress regimes (“what sins have we committed that we are born in Hindustan”), simplistic prescriptions like that he wants India to move from “scam India” to “skill India” or the dog-whistle and divisive politics that is characteristic of his domestic election speeches. Even in a speech delivered on the motion of thanks to the president’s address in the Lok Sabha, there is nothing substantial or insightful from an intellectual or a policy perspective, but is full of aggression and sarcasm, entirely political, and obsessed with Nehru, Congress and the “dynasty”. And have we in his speeches seen insights into the unique nature of caste-related marginalisation in India?

How do we then assess the brilliance of Modi vis-à-vis Rahul, especially, when we also do not have any chance to ask him any unscripted question? Surely, it must be a world record that a leader of a democratic nation has not addressed a single solo press conference in four years of rule. How do we assess the brilliance of a mind when all that we get are scripted eulogies like the London Town Hall session where there were paeans sung to Modi’s energy, asceticism and dedication to the nation, and had the interviewer himself clapping?

In contrast, we have the Rahul interaction sessions where there are unscripted, even fallacious and aggressive questions personally targeting him and his family, which then becomes the next-day headline of the establishment “media” as “In Singapore, Rahul Gandhi gets humiliated in front of a huge crowd!!!”

In 2008, Modi wrote a book in Gujarati on 16 people who inspired him. All 16 were men belonged to the RSS, betraying a very narrow worldview. Modi’s speeches and scripted interactions as prime minister do not tell us that this worldview has changed despite his extensive world travel. There is nothing in them that suggests Modi’s intellect is superior to that of Rahul (in any case, we have to dispel the illusion that Modi became the prime minister because of his intellectual ability).

Ultimately, the binary between an unwise and ignorant Rahul versus a wise and erudite Modi is the result of the most gigantic PR exercise that democratic India has seen. Yes, Modi is intelligent enough to know the mirage can break if he ventures out of his monologic politics and takes unscripted and hard questions from his interlocutors (for such past experiences with Karan Thapar and Rajdeep Sardesai had seen Modi either walking out or maintaining a stony silence). Until then, we have to go with SCAM, AK-49, TOP, ABCD, RSVP, MOM, IT+IT=IT, VIKAS, 3S, JAM, SMART, B2B, etc., all acronyms, and the book, Exam Warriors, as the greatest intellectual contributions of the 14th prime minister of India.