Rajguru has been campaigning in the Rajkot West constituency for a year now, and is known for his aggressive, macho image. 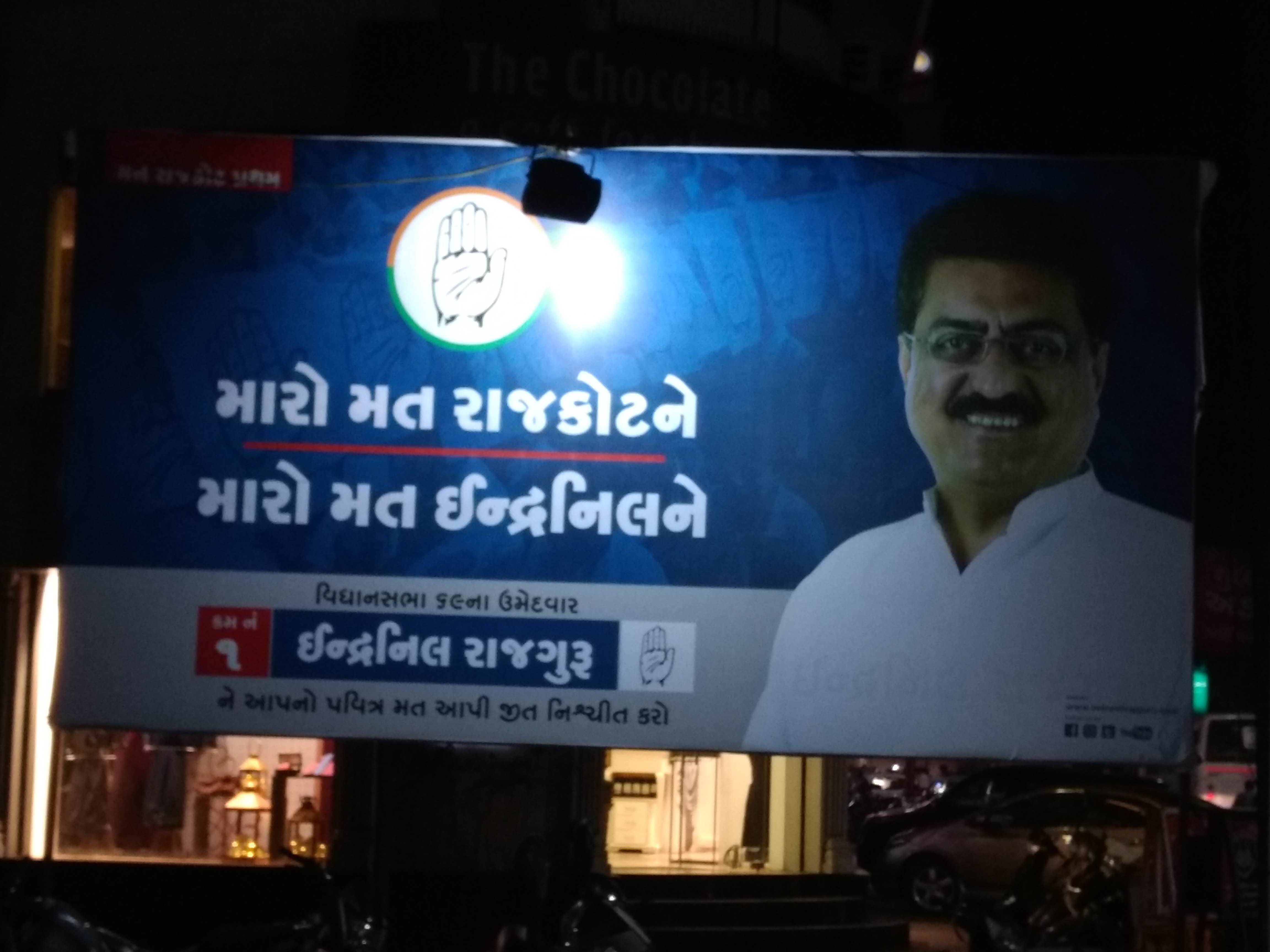 A hoarding that says ‘Vote for Rajkot, vote for Indranil’. Credit: Damayantee Dhar

Rajkot, Gujarat: Indranil Rajguru, the 51-year-old Congress candidate and currently an MLA from Gujarat’s Rajkot East constituency, will face off against BJP candidate chief minister Vijay Rupani from the Rajkot West constituency in the upcoming elections on December 9. Rajkot West has been something of an impregnable fortress for the BJP for the last two decades.

Rajkot West is the largest constituency in the Saurashtra region, with more than three lakhs voters. There are about 42,000 Kadwa Patels, 33,000 Leuvva Patels, 25,000 Brahmins, 35,000 Kshatriyas, 25,000 Vanias and less than 10,000 Jains in the constituency. Rajguru is a Brahmin, while Rupani is a Jain. Analysts say the Hardik Patel factor may swing about 10-15% of the votes that were with the saffron party before against the BJP.

Rajguru comes across as an aggressive, powerful and macho leader, who is being posed as a saviour who will lead the constituency out of decades of BJP misrule. On the other hand, Rupani comes across as a docile and non-charismatic, with an unimpressive personal portfolio. While Rajguru appears larger than his party, Rupani stands under the shadow of not just the BJP but Narendra Modi. People of the constituency are aware that Rupani was handpicked by the Amit Shah-Modi duo.

Most Congress posters have a photo of Rajguru alone, with the catchphrase “Maro mat Rajkot ne, maro mat Indranil ne (My vote is for Rajkot, my vote is for Indranil)”, while the BJP posters have an array of faces – Modi, Shah, BJP state president Jitu Vaghani and Rupani. BJP has used a series of catchphrases, including some using the chief minister’s first name as a pun: “Rajkot Vijay bhav (Rajkot shall win)”; “Vikaas matey vote do (Vote for development)”; “Narmada ni nir matey vote do (Vote for the water of the Narmada)”; and “Rajkot ka beta, Rajkot ka neta (Son of Rajkot, leader of Rajkot)”. There are also BJP posters that have photos of only Modi and Shah – which say a lot about how both the party and the electorate view Rupani as a candidate. 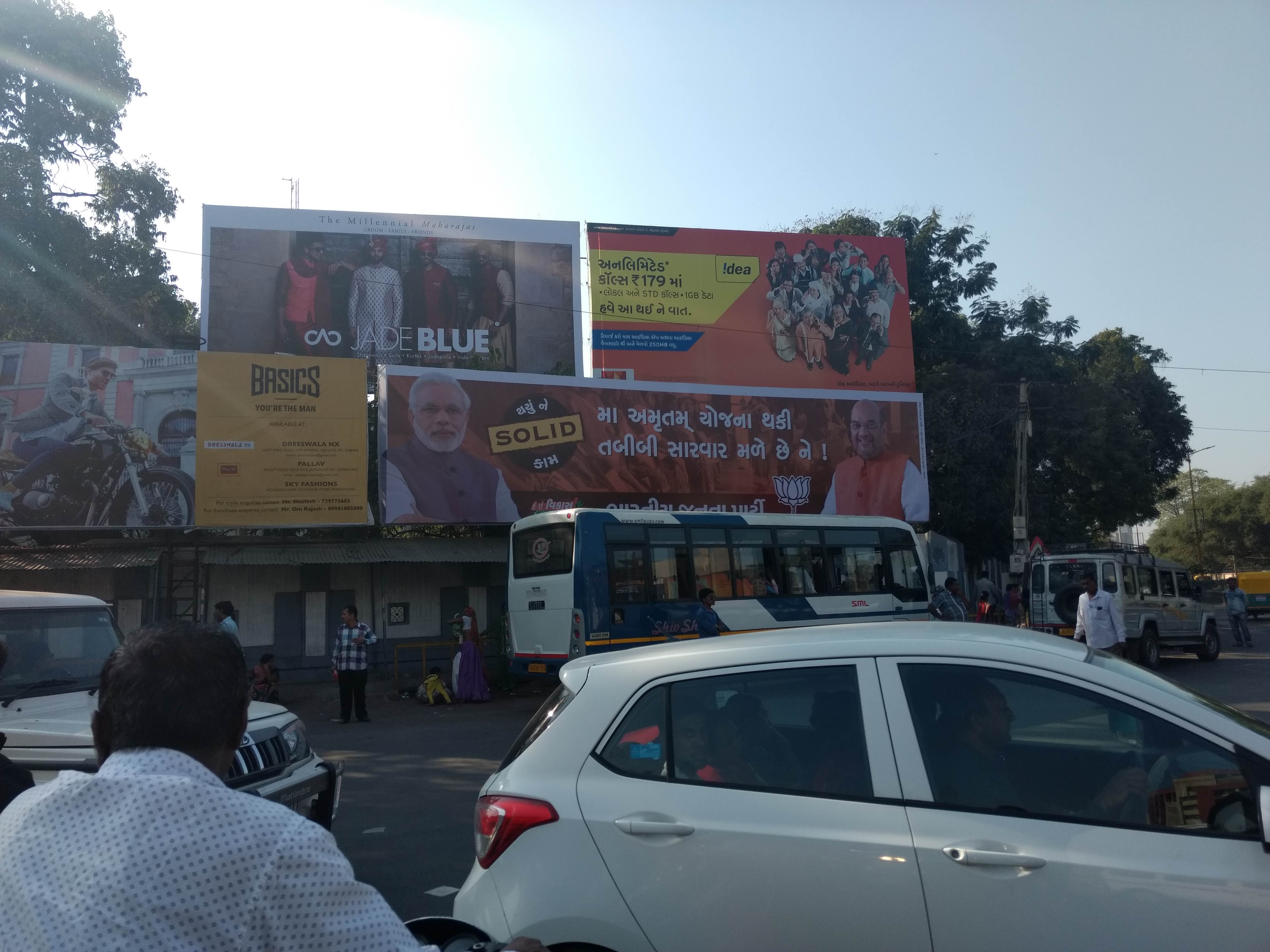 Rajkot West has been a BJP bastion since 1985 and has produced three chief ministers – Keshubhai Patel, Modi and Rupani. Despite being an important seat for the ruling party, the city has not developed as much as Surat or Ahmedabad.

While Rupani has a team of devoted, politically experienced and disciplined BJP, RSS and VHP volunteers – with at least 1,000 volunteers per booth – Rajguru, a third generation politician, is not leaving anything to chance either. As a politician who appears to understand the moves of his opposition party well, Rajguru began his preparation more than a year ago. According to locals here, Rajguru has been using the BJP’s strongest weapon against them. For the last year, he has been organising and attending various religious events to make a dent in BJP’s vote bank across castes.

Channel Public Relations Consultancy, a Delhi-based PR company, was hired about four months ago to exclusively manage Rajguru’s campaign. A social media team of about 70 youngsters has been hired from all over the country and they are working under the supervision of Sandhya, Indranil Rajguru’s elder sister. In the last year, various programmes were undertaken as a part of his campaign, including street plays, door-to-door visits, calling at least 1,000 new people everyday to interact with Rajguru, musical concerts and events, and comedy shows by local artists. Other unique programmes were also organised, like ‘Young Rajkotians’, where Rajguru would reach out to the youth and first-time voters, and ‘Coffee with Congress’, a five-day event where anybody could ask Rajguru a question in one-hour sessions between musical performances by local artists. The women’s cell of the Rajkot Congress reached out to women and senior citizen voters.

Both candidates began their political careers as standing committee chairman in the local civic body, but Rajguru’s track record is unbeaten. He won in the Rajkot East constituency after the BJP had been in power there for 22 years, and won the civic elections for the Congress for the first time in the year 2000. 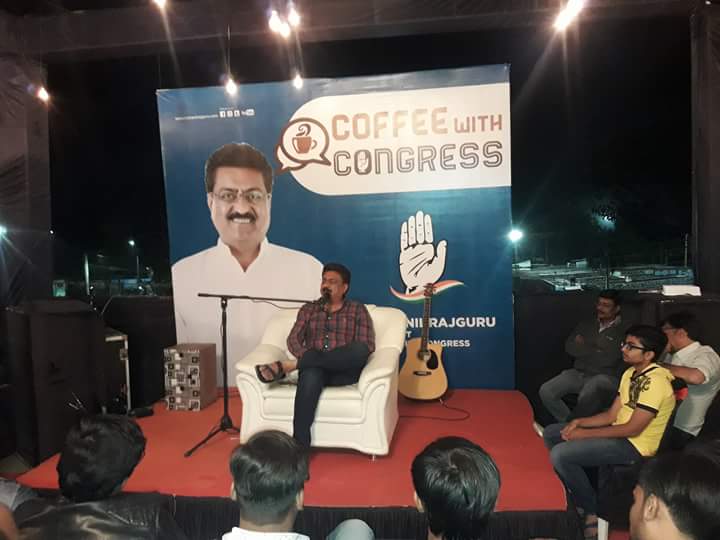 The candidate who calls Rupani “Amit Shah ka CM” sat down for a conversation with The Wire. Excerpts:

If he (Rupani) doesn’t have money, then how is the city filled with BJP hoardings? Rupani spent about Rs 11 crore when he had contested and won the by-poll of 2014, though he declared assets of only about Rs 7 crore. This time, just the hoarding spaces are worth more than Rs 9 crore. Who gives this money and where does it come from?

The BJP has come up with a catchphrase for Vijay Rupani – Rajkot ka beta, Rajkot ka neta. How will you counter that?

Many leaders of the BJP have been portrayed as the son of Rajkot in past – Keshubhai, Vajubhai Vala, Modi and now Rupani. But none of them turned to look back at Rajkot or its people after winning. Nobody did anything for Rajkot. So this year, if Rupani is portrayed as the son of Rajkot, so am I. If he became the leader of Gujarat, I shall too become the leader someday.

Vijay Rupani comes across as a soft spoken, down to earth and docile leader, as compared to your aggressive image. Does this factor go against you? How do the people of Rajkot view Vijay Rupani?

During his days as standing committee chairman of the civic body, Rupani promoted organised corruption. As an MLA, he misused the state machinery and kept the police in his pockets. He has held the hands of criminals and helped them flout law and order. People of Rajkot know this face of Rupani.

You won from Rajkot East in 2012 and yet wanted to fight from another constituency this election. Why?

I contested from Rajkot East to defeat a candidate who had not proven to be the right leader for the people of the constituency. But while I was an MLA from Rajkot East, an equally incapable leader not only won from Rajkot West but acquired the highest post of the state. I want to defeat the candidate who is not right for the people of the constituency and Gujarat. It is better to stop him here than let him ruin the state further.

Yes, I want to defeat Rupani at any cost, but that is not personal war. I have never said anything about his family or personal life. How is countering and highlighting his acts of corruption a personal issue? When I spoke about corruption in the assembly earlier, Saurabh Patel (former finance minister) and Rupani called me aside and asked to not attack them on a personal level. When the fight is against a shrewd opponent, one has to see that their weapon is potent. So I have been talking about corruption in the public domain committed by these leaders – and that isn’t personal.

Before the announcement of your candidature, there was a lot of resentment against you in the party fold in Rajkot. Many leaders complained that you not only want to contest from Rajkot West, but want your choice of candidates to be selected from Rajkot East and Rajkot Rural. Are these leaders standing with you now?

There were issues that have been resolved. Candidates have been finalised and party members are working unitedly with the sole intention of defeating the BJP now. We keep our infighting aside when we stand united against the BJP.

Will Congress lose Rajkot East in your absence?

There is no way we will lose that seat again. In fact, we have chances of winning Rajkot Rural too.

The Rajkot West seat has been a BJP bastion since 1985. How do you plan on winning from the constituency?

Usually, the Congress would wake up sometime ahead of the election and contest with about 20% preparation. This time, preparations have been going on for a year and we are about 60% prepared. There is an enthusiasm among Congress workers, as they have me as a strong candidate. Besides this, BJP workers are unhappy with Rupani being the candidate again. Rajkot has not developed at all, despite producing three CMs for the BJP. They made an issue out of cows for evoking sentiments. I would have understood the sentiment that they regard the cow as a mother if the BJP had constructed even one cow shelter for the dying and sick cows. They call Gujarat a dry state, but alcohol is available in abundance, even within about a kilometre of the CM’s house in Rajkot. The anger of people who suffered due to the Goods and Services Tax and demonetisation, and the way the BJP has handled protestors – be it Patidars, businessmen or Anganwadi workers – will also add up in my favour.