All the official communication to celebrate 75 years of independence now centre around the current supreme leader. 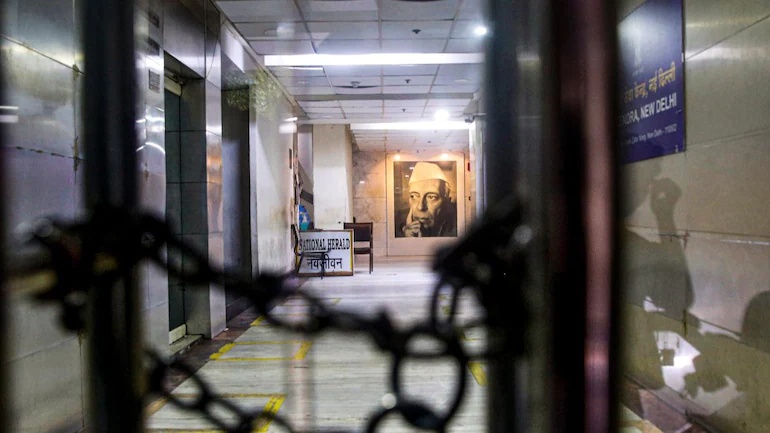 At midnight of August 14, 1947, the first prime minister of India Jawaharlal Nehru stood in Parliament and read out a speech that has become iconic, one that still has the capacity to raise goosebumps in everyone who reads or listens to it even today. “Long years ago we made a tryst with destiny, and now the time comes when we shall redeem our pledge, not wholly or in full measure, but very substantially. At the stroke of the midnight hour, when the world sleeps, India will awake to life and freedom,” he said.

Seventy-five years later, as that moment is being celebrated around the country with all the fervour of a government-mandated programme and people wave (polyester) flags from their windows, Nehru is conspicuous by his absence. Not only is his name and image been banished from all official communication, we get to see his photo behind chains in the offices of the National Herald, a newspaper he founded and which has now been partially sealed by the Enforcement Directorate (ED).

As if to further emphasise the unimportance of the man, his descendants have been questioned for hours by the ED, his great-grandchildren forcibly picked up from their protests by the Delhi police, and a large contingent of cops deployed outside Sonia Gandhi’s house.

Also read: Indians Love Their Tiranga, Modiji, Do Not Use it to Cover Up Your Failings

If the Narendra Modi government wanted to make a statement that the Nehru-Gandhis don’t matter anymore and that Jawaharlal Nehru himself matters even less, it managed to make it, at least as far as Sanghis are concerned. For the entire optics of the sealing of the Herald and rough treatment of Rahul and Priyanka Gandhi fulfil the most perverse fantasies of the Sanghi mind, where the myth of their treachery, starting from Nehru onwards, is firmly lodged, history be damned.

And what better way to attack them than to deploy the Brahmastra of the Modi government, the ED. This investigative body has been used freely against the political enemies of the government and the BJP – in Maharashtra, against Sanjay Raut, the most voluble critic of both, in West Bengal, against Mamata Banerjee’s minister and also a nephew, and on the national level, the Gandhis, who have been attacking Modi personally and his government. The CBI may be a caged parrot, but the ED is, at least for the moment, a guided missile that is being sent out repeatedly against those who the government finds inconvenient or irritating.

Mayawati was silenced three years ago when the ED opened an enquiry on the ‘memorial scam’, but the Gandhis seem to be made of sterner stuff and have continued to go after Modi. Priyanka Gandhi, surrounded by police personnel and about to be hauled crudely by them, chanted, “Jab jab Modi darta hai, police ko aage karta hai (Whenever Modi is scared, he pushes the police forward).” That must hurt. It is now certain that they cannot expect an invitation to any celebration marking the 75th year of independence.

The anniversary meanwhile has been reduced to two distinct themes: the hailing of the chief and his many putative achievements, and the waving of the flag, literally. Exhortations have come from on-high that the flag must be kept outside everyone’s homes so that the nation is united and those who are on various social media platforms should use the flag as part of their DP (display picture). This particular digital DP – or even inspirational quotes from Modi – can be downloaded from a website, which asks for all kinds of personal details such as location and contact details.  As the advocacy organisation Internet Freedom Foundation warns, this has some serious implications.

The website allows you to log in using your phone number, name, or Google SSO. It then uses your device location to allow you to pin a digital flag on your current location. Owing to the poor design and privacy policy of the website, it can put your data at harm. (2/7) pic.twitter.com/c0gqOCPBJs

Of course, in the name of #AzaadikaAmritMahotsav and our own patriotism, we may not mind handing over this personal data to yet another government body. That bus has left a long time ago.

Also read: The BJP Wants to Erase Nehru. Let’s See What India Would Have Been Without Him

There are some ironies here though. Consider that the organisation that Mr Modi belongs to, the Rashtriya Swayamsewak Sangh, took no part in the freedom struggle and even more ironically, till now, did not recognise the Tiranga. While Modi is now asking his fellow citizens to wave this flag enthusiastically, the RSS has not hoisted it for 52 years. The elders of the RSS had found the colours of the tricolour deeply offensive because they represented the nation’s diversity. The national flag, according to the RSS, should have consisted only of the bhagwa (saffron) and not also the much-hated green.

Apart from the many images of Modi, the website showcases many activities including rangoli competition, stories of ‘unsung heroes’ and downloads of images and Modi quotes. Ditto, the new song, ‘Har Ghar Tiranga‘, which is not about India’s achievements over 75 years, but the pet themes of this dispensation – yoga, outsized statues (of Shiva and Vallabhai Patel, among others), Swachh Bharat, ending with many images of, who else, but the current prime minister. The template is the same as ‘Mile Sur Mera Tumhara’ – the past never really goes away.

But in all this patriotic fervour, one would be hard put to get anything about Nehru, even on the website. He has simply been airbrushed away, somewhat like the removal of purged leaders from photographs in the old Soviet Union. As far as Narendra Modi and his government are concerned, Jawaharlal Nehru simply does not exist.

Keeping that in mind, the “chaining” of Nehru, the police action on the Gandhi siblings and the virtual house arrest of Sonia Gandhi, make perfect sense. The presence of the Gandhis is inconvenient for the current prime minister. But he cannot wish them away. And as far as Nehru is concerned, his resounding “Tryst with Destiny” speech will still resonate and inspire Indians for many more years, far beyond this Amrit Mahotsav with its limited shelf life.