India Needs to Have a Serious Conversation on Class-Based Discrimination 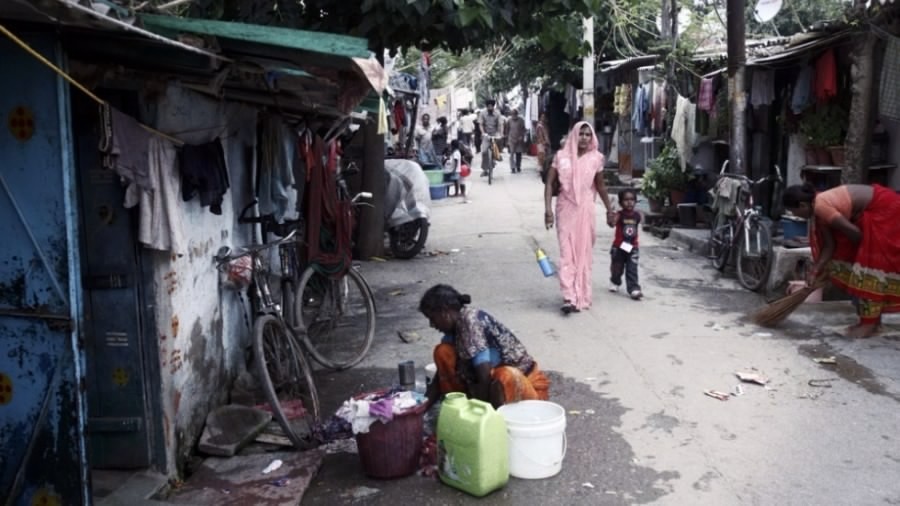 Why do we continue to ignore our poor? Credit: Reuters

The recent events in Noida’s Mahagun Moderne apartment complex and the subsequent demolition of the slums adjacent to the complex citing security reasons brought to the fore a very well-kept secret in Indian society. The mob that attacked the complex on July 12 was wrong in disregarding legitimate means in favour of rioting, but the swiftness of action by authorities acting on the complaints of Mahagun Moderne residents makes it clear that a word from the right corners could work wonders. In this context, it is probably unsurprising that incidents like these do not attract the uproar they deserve.

For all the lofty ideals in the Indian constitution and the collective conscience of this nation that rails against instances of injustices, a serious conversation on class-based discrimination is missing from the socio-political discourse today. This is probably because most of us are complicit in it, either by perpetrating it in some form or other or at the very least turning a blind eye to it. The Indian intelligentsia has been unequivocal in denouncing discrimination based on caste and religion, but is oddly quiet about the discrimination faced by the poor. The ignominies suffered by the poor on a daily basis are no less appalling when compared to people facing caste or religious based discrimination. In many households, maids are not allowed to use the toilets in the house or sit on chairs and when they accompany the people they work for to restaurants, they are expected to wait and watch while their employers eat. Take, for instance, a minor road-accident. It is very easy to abuse the poor rickshaw-wallah or the auto-driver. It is also very easy to call the vegetable vendor who overcharges or the auto-driver who insists on an extra 10 bucks a cheat while we very willingly shell out weekend prices at theatres and surge pricing for cab aggregators. Isn’t this a manifestation of our class-bias that emboldens us to abuse someone who is economically inferior to us? Yet strangely, this isn’t as much of an issue as caste-motivated floggings or communal lynchings are.

This apathy towards the poor afflicts the political class too who, apart from paying occasional lip service to the cause of poverty eradication, have not made any serious attempts to actually improve conditions. Considering that more than a fifth of all Indians live below the poverty line and almost 80% of these people live in extreme poverty, according to the World Bank, attempts to mobilise the poor are found wanting. This is because the poor present an inconvenient equation to the politician. The class divide in our country is so wide that it is not possible to help the poor without alienating the rich and especially the middle-class, which unites under the umbrella of “common man”. The ‘common man’, as understood in political circles, is a voter belonging to the lower-middle class and when it comes to elections is one of among the most motivated and fickle voters. No wonder then that the political establishment is quick to appease this class. This aspirational class is determined to climb up notches on the class system and is adept at extracting value for its votes. Unfortunately in this scramble, the lower-middle class mimics the callousness of the rich towards the poor. Therefore, this is the class where you will find most vocal critics of subsidies, even the 2016 Economic Survey put the figure of government subsidies to the non-poor at over 1 lakh crore.

The equation for political parties is simple in this regard – the rich fund elections, and the lower-middle class provide the votes. Therefore, any political narrative that ignores this class of motivated voters is bound to be doomed. Thus, issues of the lower middle-class like inflation, corruption and employment dominate the political narrative whereas the issues of poor like food security, farm distress and access to healthcare get pushed to the periphery. When Arvind Kejriwal launched his political campaign on the plank of ending corruption, he sought the support of the Delhi auto-drivers but first he made them swear an oath that they themselves wouldn’t engage in corrupt practices by overcharging passengers. This was a master-stroke because while he appeared to be co-opting auto-drivers to his cause, he was sending a message to the common man in Delhi who complains incessantly of the erratic behaviour of auto-drivers. Similarly, the support demonetisation received was largely from the lower middle-class on account of schadenfreude around the fate of the class they seek to replace. Although a big deal was made out of whether the poor suffered due to demonetisation, it is worthwhile to note that the poor survive with less than Rs 30 a day and hence were largely unconcerned.

There is another reason why political parties do not factor the poor into their equations. While the poor have significant commonalities around living standards to be identified as a voter-group to an observer from the outside, there isn’t enough class-consciousness to go around on the inside. Historically in India, caste-consciousness has been a stronger driver of voting behaviour than class-consciousness and it is in the interest of the political establishment to maintain status quo rather than invest in ideologies that would create class-consciousness. Besides that, they would be running the risk of losing out on other voter-groups like the lower middle-class and the rich because in a fragmented society like ours it is difficult to play both sides. Even if one particular party decided to invest in a long-term strategy to capture poor voters irrespective of caste and religion, its short-term losses at the hands of other parties willing to pay cash for votes or use caste- and religion-based politics would serve as a major disincentive.

These complexities aside, there may be another simpler explanation as to why political parties are not invested in the poor. Political parties continue to be dominated by the rich. The 16th Lok Sabha has 442 crorepati MPs and none of the remaining MPs would qualify as poor by any metric. Similarly, in the UP elections earlier this year, roughly 30% of all contesting candidates had assets and income running into crores.

In this scenario, it is hardly surprising that the political establishment feels any sort of empathy towards the poor. And true to form, the current crop of political leaders behave like erstwhile monarchs disbursing discretionary largesse to craft their pro-poor images rather than trying to bring about structural changes that would threaten their positions.

Parag Mohanty is a political researcher and consultant based in Delhi.