In India, Radicalisation Is Being Flaunted as a Badge of Honour

The radicalisation of the majority community has seeped into society and organs of the state and is being seen as essential to protect the motherland from the "traitors". 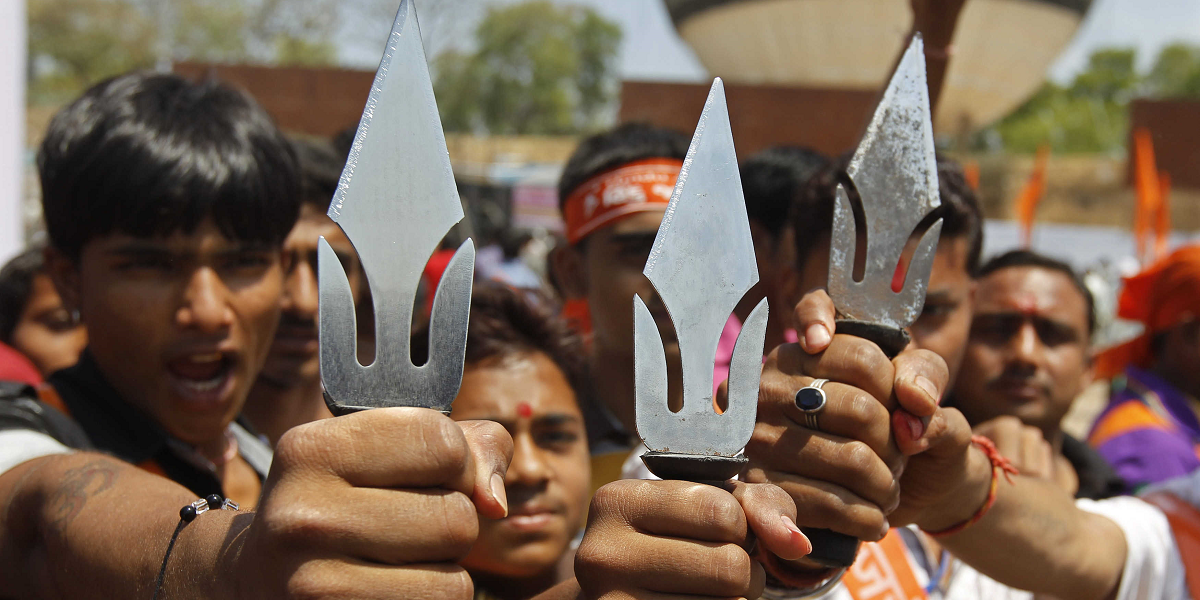 Radicalisation: The action or process of causing someone to adopt radical (extreme) positions on political or social issues. (Cambridge dictionary)

The conventional or popular belief in India (as also globally) is that radicalisation is associated with only one religious community, the adherents of Islam. How wrong this perception is can be seen in our country over the past few years, where an uncharacteristic but toxic fundamentalism appears to have seized the euphemistically termed “majority community”, especially in the north and west of the country. Driven by an ideology which has acquired political and executive legitimacy, this “reverse” radicalisation has now become almost state policy and has seeped deep into our social fabric. But whereas earlier it was an insidious infection slowly permeating the organs of this republic, over the past two months, post Article 370 and Citizenship (Amendment) Act (CAA), it has now erupted into a full-blown pestilence which its carrier-hosts no longer bother to disguise but flaunt as a badge of honour. The radicalisation of the majority community is now seen as essential to protect the motherland from the “traitors”.

This has been a work in progress since 2015, the idea being to persuade the majority that they are under threat from an “other” whose loyalty is not to India. The constant barrage of vilification, hate, fake news and reinterpretation of history has been largely successful, as repeated electoral successes of the BJP prove. For radicalisation to succeed, it is essential to create an enemy, and the community of 200 million with the same religion as Pakistan fits the bill perfectly. It has been de facto made an extension of that country and has therefore become the prime enemy. But with this enemy has been merged anyone who stands up for their rights or criticises the government: liberals, intellectuals, ‘urban Naxals’, “sickulars”. The enemy thus fully conforms to the hydra-headed monster to be found in all Hindu mythology – for example, Ravana – which of course has to be slain before Ram Rajya can arrive. The script is complete.

I am quite amazed at how radicalised my co-religionists have become. Well educated, financially secure, widely travelled, privileged families have swallowed the poison being dished out by the BJP and amplified by a craven media. They are willing to believe every lie loaded on WhatsApp and Twitter by the party’s IT cell, suspending their disbelief and eager to teach “them” a lesson for all the imagined historical wrongs perpetrated by their ancestors. The government takes the lead in this catechism by creating dubious legislation and the patriots follow it up by lynching, desecration and riots. And the BJP periodically hoovers up the votes.

Even by the low standards of our politicians, however, the ruling party’s campaigning style for the February Delhi elections reveals a radicalisation that has plumbed the depths. The protests at Shaheen Bagh and elsewhere have been made the metaphor for anti-nationalism and betrayal. A minister openly calls for shooting of the “traitors”, an MP warns that “they” will enter your homes and rape your womenfolk, another terms the election as a Pakistan vs India match, a chief minister thunders that his government will not give “them” biryani (as Kejriwal allegedly does) but give them bullets. He has to be taken seriously because his police killed 21 people in December. The prime minister, no less, fans the fanaticism by alleging that Shaheen Bagh is not a protest but an “experiment“: the innuendo leaving no room to doubt what this experiment is about. And no one bats an eyelid – not the Election Commission, not the Supreme Court, not my Hindu neighbours in my housing society, not my colleagues in the IAS, not even most of my own family.

It is one thing for politicians to become radicalised, but when organs and agencies of the government and state also adopt such ideologies, then the danger becomes very real. And this appears to be happening with the police forces in some states, particularly the crucial Uttar Pradesh and Delhi. We have learnt to live with the lack of professionalism, ignorance and heavy-handedness of the police, but their behaviour in these two states over the past two months goes beyond incompetence and sycophancy into the realm of radicalisation. The savagery with which the students of Jamia Millia (a minority institution) were beaten up to the accompaniment of racial and religious invectives, revilement and challenges, even a mosque trashed, leaves no doubt that the motivation was to teach these “enemies” a lesson. The brutal conduct of the police in UP where 21 people were shot (all Muslims, as per media reports) has been even more unambiguous and clear. The homes of members of the minority community were raided in town after town, their cars and belongings vandalised, hundred arrested (now being released by the courts for want of any evidence), dozens arrested and roughed up, notices served for compensation for ” damage” to public properties without due process of the law. One SP of a district was even recorded telling Muslims to go to Pakistan, advice for which he was even praised by ministers. The chief minister himself threatened revenge: the police was only too happy to follow this cue.

No one disputes that the police are required at times to use force to control a situation. But such use of force must always be proportionate to the danger posed, must not be excessive and should not be motivated by a desire to exact vengeance or to “teach them a lesson”. It should cease to be employed when the danger posed is over. Nor should the object of the action be regarded as an enemy just because he or she professes a different religion. The display of force should be “non-violent” as explained in a recent article by an officer who was the Delhi police commissioner at the time of the Mandal agitation in the early 90s. 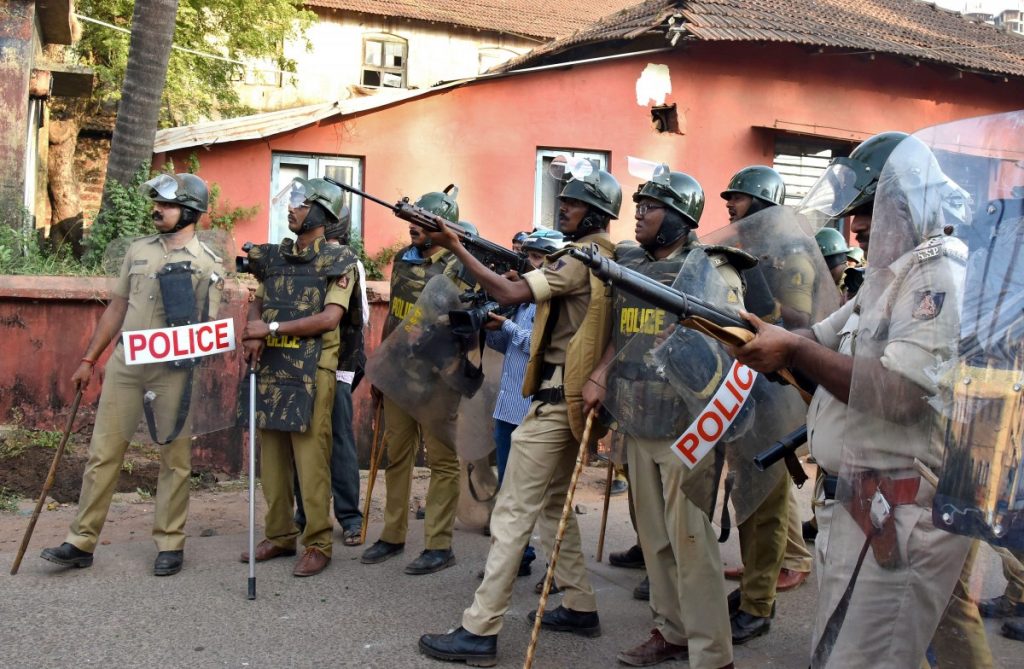 But the bestiality and viciousness displayed by the Delhi and UP police to counter the CAA/NRC protests mirror an emerging radicalisation in their thinking not seen before. And it is spreading to other states: in Karnataka a nine-year-old girl student of a school is charged with sedition, and her teacher and mother arrested, for taking part in a play on the CAA! Debates and seminars on the subject are disallowed, an Arts India exhibition raided by police in Delhi because someone there was wearing a dress resembling dresses worn in Shaheen Bagh, another JNU scholar arrested for sedition for calling for a blockade of roads in Assam. Never before has the sedition law been wielded so indiscriminately by a rampaging police in BJP-ruled states, all in flagrant defiance of the law laid down by the Supreme Court time and again.

Also Read: A Higher Threshold Should Be Set for Prosecution Under Sedition Law

The problem, however, is not that the police or politicians are showing increasing symptoms of radicalisation. The real threat, and challenge, is that one in three Indians support this pervasive paranoia, going by the BJP’s vote share. It is evident in the pro-CAA rallies, the three shooting incidents against CAA protesters, calls for boycott of shops and restaurants owned by Muslims, the eviction of a lady tenant from her Lajpat Nagar flat because she dared to protest an Amit Shah rally, the trolling of Deepika Padukone and withdrawal of endorsement contracts because she stood up for Shaheen Bagh. And the support for this bigoted narrative runs across economic and social stratifications, making it that much more difficult to counter. If a minority community is radicalised, it disrupts society. It is infinitely worse, however, for a majority community to be radicalised, for that can completely change a country’s constitutional values, character, ethos and transform it into an unintended mutant. We face this very real danger and possibility today.