The Fight for India's Democracy, From the University to the Streets

Hollowed out and neglected as they have been, the universities remain one of the few truly public spaces in India. 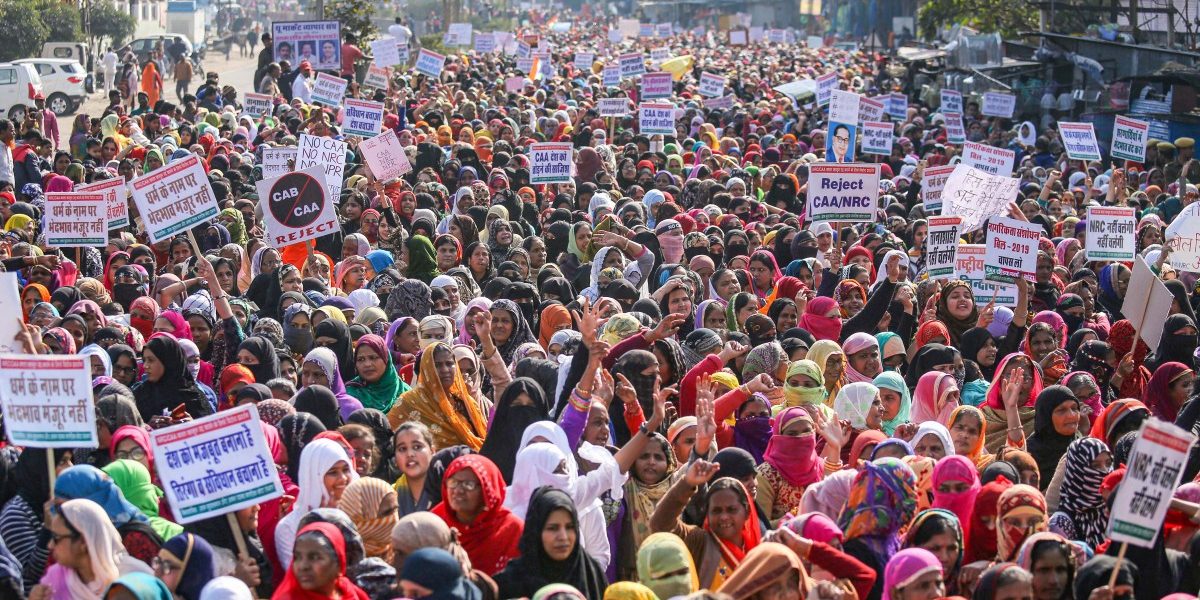 Protest against the CAA and NRC in Kota, Rajasthan. Photo: PTI

India, we are constantly reminded, is the ‘largest democracy in the world’. The phrase has become the most prominent element in India’s image. An irrefutable proof of our democratic credentials to the world and ourselves. The events of the last few months, around the Citizenship Amendment Act (CAA) and National Register of Citizens (NRC) and the resistance to it, must begin with some critical reflection on this credential.

Largest is a quantitative concept. A matter of numbers. The proof of that treasured adjective is the sheer number of voters who participate in the electoral exercise. The Indian Constitution adopted universal adult franchise, which had taken a century of struggle in most Western democracies to achieve.

Yet numbers, however remarkable their weight, cannot and most certainly should not exhaust the assessment of democracy. Today, the ruling party point to the overwhelming number of representatives and votes they garnered in the last election. Their various decisions since then, they argue, is beyond reproach since they come robed in the majesty of democracy.

To effectively counter this assertion that all discussions of democracy must begin and end with numbers, one has to go beyond the present conjecture. At the same moment the Constituent Assembly was expanding the franchise to all adults, B.R. Ambedkar noted that “democracy in India is a top dressing on an Indian soil that is essentially undemocratic”. Despite the advent of formal democratic institutions, Indian social structures were deeply hostile to democratic values. If democracy was meant to empower people to choose their own rulers, most Indians had little choice but to live under the oppressive rule of societal hierarchies. If democracy meant equality amongst citizens, Indian society remained deeply unequal. Democracy understood merely as elections was top dressing on this undemocratic soil.

Seven decades since his warning, that soil remains untilled. If democracy was a revolutionary new idea, one that scared the rulers across the world, it is because it had the audacity to declare that the people are not just passive subjects but active citizens who can collective make their political world. Seven decades ago Indians formally became citizens from subjects.

Constitutionally, India was a democracy. Democratic politics and society, on the other hand required an organised citizenry – engaged and empowered. It happens not just by drafting a new constitution, but through a movement that transforms ordinary individuals into political collectives. The modern prevalence of the term citizen dates back to the French Revolution, when the French, transformed by their collective political experience, began addressing each other as citoyens instead of the old hierarchical honourifics.

However, Congress, which transformed itself from a party of mass anticolonial movement to a party of postcolonial government at the stroke of that famous midnight hour never worked since to mobilise and organise the people into an active citizenry. Instead, the omnipotent state, in its benevolence, offered the citizens various plans and programs. And every five years, a right to decide who controlled the levers of that state in the quiet privacy of the ballot box. To be citizen came to mean primarily being a voter and a ration card holder.

First as tragedy, then as horror. Today, that state demands that the people stand, proper documents in hand, supplicant-like in front of it for the privilege of being a citizen. It can decide, in its whim and wisdom, whether or not one is deemed worthy of such a status. If the democratic ideal was of an active citizenry deciding the shape of the political institutions, today the supervisors of political institutions seek to decide who can or cannot be deemed a citizen. Instead of the people choosing their rulers, here the rulers want to choose their people.

From a certain administrative standpoint, that demand might seem logical. Don’t all countries routinely demand proper documentations from immigrants and visitors? But that claim itself betrays the transformation of the exceptional into the norm. We are all foreigners till proven otherwise. The whole country is a border, with its associated logic of security and suspicion. Should we be shocked by news reports that Mumbai and Bengaluru now has detention camps? In the perpetual borderland that would be India, one’s citizenship would be a matter of right papers. Not of shared belongings and projects that makes a geography a country, and a country a democracy.

If the NRC reduces citizenship to matters of administrative proof, the CAA makes it a derivative of identities. Once again, the citizen becomes a passive subject, this time to their surnames. In the late nineteenth century, census takers in England asked respondents about their professional vocation. In India, for the colonial census, they decided to classify people on the basis of religion and caste.

The understanding was that the subjectivity of Indians were fully defined by their religious or caste affiliations. Those were the subjects of an empire. Today, the parliament of India claims – in letters of law – that the meaning of citizenship of this republic is fully exhausted by one’s given surname. A republic of passive atomised population, with the right papers and right surnames.

Resisting this logic of passive administered citizenship requires public arenas and institutions where citizens can become active political actors. Even seven decades after India became a republic, there remain scarce few public spaces in India. Spaces that are shared, ones we feel a collective ownership of and belonging to. Caste, with its myriad rules regulating sharing, is the most obvious reason. So increasingly is class, as the upwardly mobile Indians withdraw from public schools and public transportation into their gated residences protected by private security.

Unions, which forged individual workers into collectives were always weak in India, and perhaps at their weakest now. Media, that idealised sphere of public debate, is overwhelmingly operated by and for a few powerful private interests. Privatisation, so prevalent in our discourse since 1991, is not merely an economic phenomenon but also increasingly the condition of our political existence. 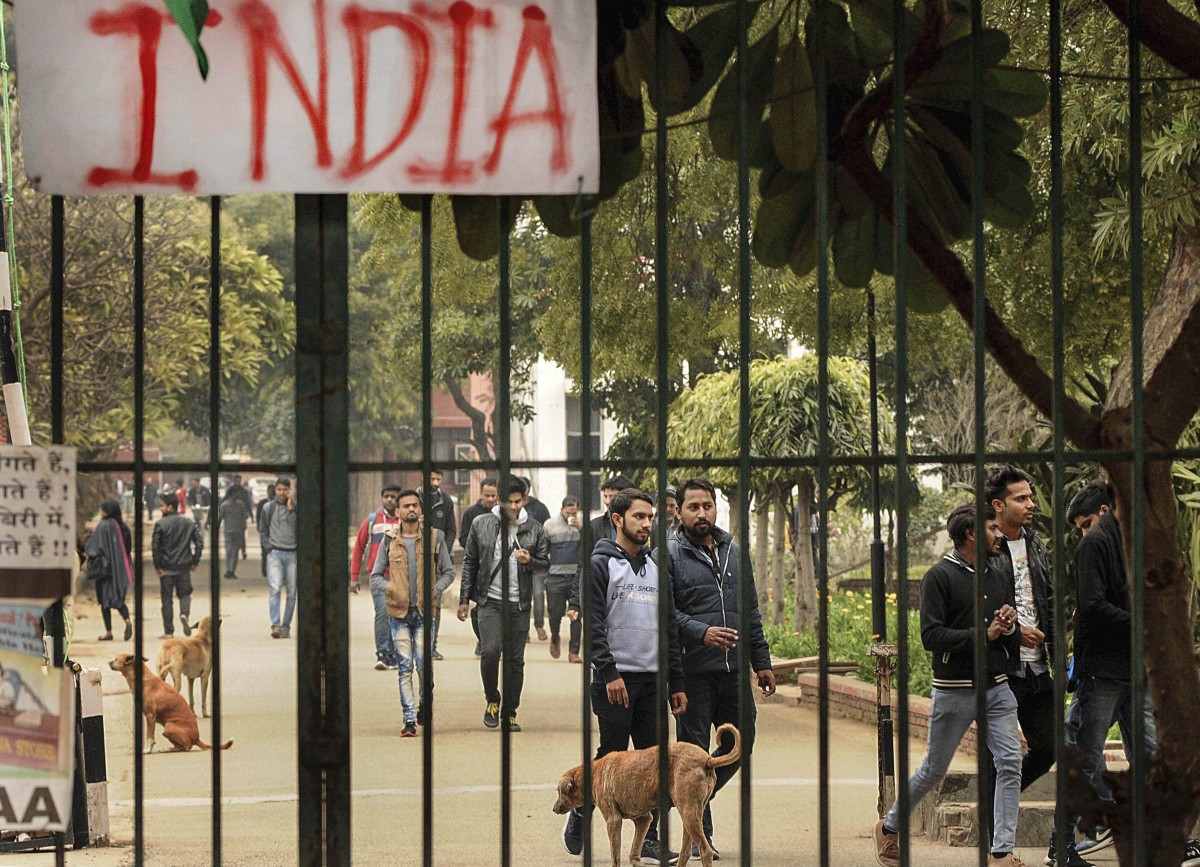 It should be of little surprise, then, that the resistance began from universities. Hollowed out and neglected as they have been, the universities remain one of the few truly public spaces in India. A shared space where one can develop relationships that are not dictated by settled hierarchies or private transactions. That is, to think and act collectively, or even just imagine what a collective beyond one’s private world could be like. A space that might make passive subjects into active citizens. This is why, as the recent attacks in Jawharlal Nehru University proves yet again, the government and their ideological allies fear the public university so much. Because they provide a space, however besieged and hesitant, to imagine another kind of democratic life of a citizen that goes beyond their cold logic of documents and identities.

The movement that the universities sparked bear the green shoots of such an idea of citizenship. The very act of marching, gathering, sitting in public spaces, transforms private individuals into political actors. It creates hitherto alien notions of solidarity and camaraderie. Of standing for and with. Crowds on the street, flowing like a river, provides a counterpoint to the neat calculation of numbers. When those crowds read aloud the Constitution, the part they read is the Preamble that speaks about ‘We, the People’ resolving to constitute – that is, to create – India as a republic. This is not a legal petition in the chambers of the Supreme Court on the basis of this or that individual right. Rather it is an assertion – in public squares and streets – of the collective creative power of citizenship. A refusal to be defined and determined by documents.

As promising as this beginning is, the path ahead is hard and messy. Confronting the enormous power of the state machinery requires perseverance and organisation. It requires digging deep into the societal soil Ambedkar talked about; creating effective counter power to the institutional power of the government. The most suitable instrument for that task would usually be political parties or unions. But the post-independence Congress was never a party of mass organisation, and the regional opposition parties exist primarily as instruments of the electoral game, owned and operated by various families.

Also read: Three Observations From India’s Past to Contextualise the Present Struggle

Ironically, since the decline of the Left as a major political force, the only party that has successfully created a coherent and ideologically committed organisation is the one that is in power. The obstacles on the path of the nascent movement would therefore seem substantial at first glance. Yet, it has the benefit of the knowledge that throughout history democracy has more often been born and preserved in the public squares and streets than they have been through Supreme Court decisions and ballot boxes.  For citizens – in its true sense – of India, there is little to lose but that hope.

Outside the gate of Jamia Millia Islamia university, the students have set up a makeshift library and are offering classes to the kids in the neighbourhood. Asked what would happen if the police shut it down, the organisers said that if they close this one they would open other universities in every corner of the country.

Sandipto Dasgupta is Assistant Professor of Politics at the New School for Social Research.