The prime minister made a fresh pitch for holding simultaneous elections and put focus on his aim of turning India into a $5-trillion economy in the next five years. 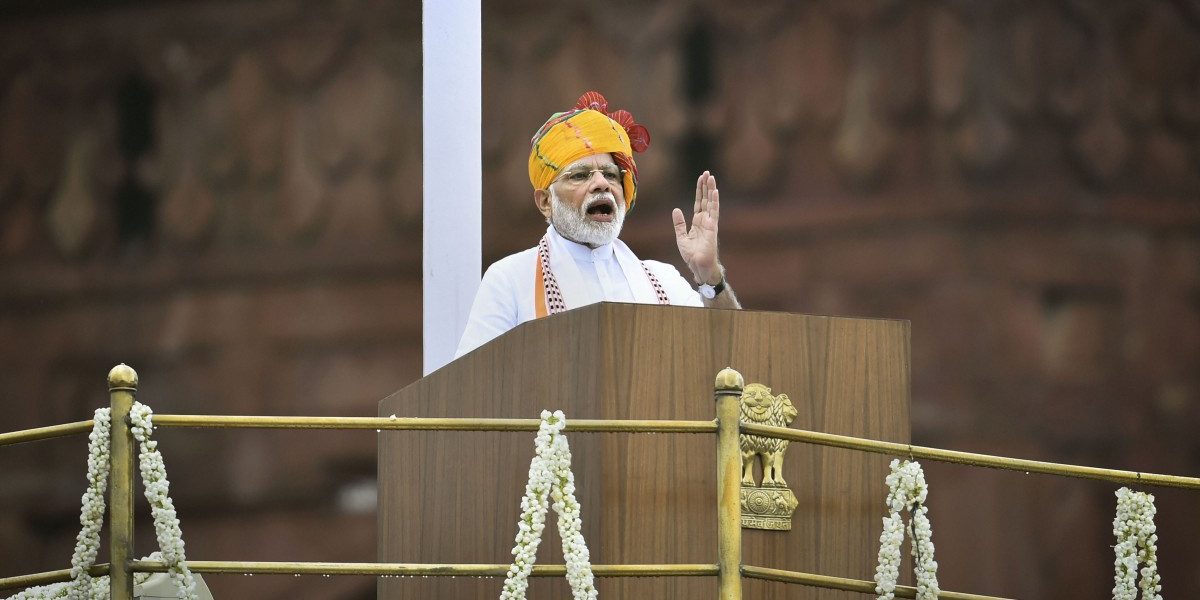 New Delhi: Speaking from Red Fort on the 72nd anniversary of India’s independence, Prime Minister Narendra Modi lauded the achievements of his government “within ten weeks of returning to power,” including the Centre’s move in Jammu and Kashmir and the new law on triple talaq.

Notably, the prime minister also announced the formation of a post – ‘chief of defence staff’ – to supervise all three defence forces. “This is going to make the forces even more effective,” he said.

In his first Independence Day speech since he was re-elected as the prime minister in May 2019, Modi talked about his vision for ’21st-century India’, and the government’s vision for the next five years. During 2013-14, he said, the mood of the nation of that of “despair”, which the prime minister said has changed in 2019 – after “five years of hard work”.

Over the last five years, the prime minister said, his government has “repealed nearly 1,450 unnecessary laws – one every day on average”.

Among the “achievements” of the re-elected Modi government, the prime minister said was the scrapping of Articles 370 and 35A in Kashmir. “The work that wasn’t done in the last 70 years, the new government has done within 70 days,” he said.

That the bills – stripping Jammu and Kashmir of its special status and bifurcating the state into two union territories – were passed in the Rajya Sabha with a two-thirds majority, he said indicated that “everyone was wanting this decision, but the question was who will come forward to do it.”

“We want Jammu and Kashmir to move forward,” he said, as the state remained cut from all forms of communication for the eleventh straight day on August 15.

Those supporting Article 370, the prime minister said “are being asked by the rest of the country that if they [the Articles] were so important, why didn’t you make it permanent over the last 70 years? Why did you let it remain temporary?”

“If there was so much conviction, you should have come forward and made it permanent,” he said. “It means you also know that what happened was not correct, but you just did not have the courage or resolve to bring reforms. It would have jeopardised your political future, but for me the country’s future is everything.”

Triple talaq, he said, “hung like a sword over the heads of our Muslim mothers and sisters.” Talking about its abolishing, the prime minister said: “We have taken a very important step by taking action on triple talaq.”

“We have always thought about our Muslim sisters and mothers. If we can think of equality for women, why shouldn’t we think about removing triple talaq for our Muslim women?”

“Many Islamic countries abolished the practice long ago, but for some reason, we did not do it in India. If we can abolish Sati and make laws to abolish foeticide and dowry, why not triple talaq?” the PM asked.

‘One nation, one election’

With Central government’s move in Jammu and Kashmir, he said Indian citizens can now say the country is: “one nation with one constitution. India has also achieved ‘one nation, one power grid’ in the energy sector and arrangements have been made for ‘one nation, one mobility card’.”

Making a fresh pitch for holding Lok Sabha and assembly polls together, Modi said: “It is good that such a discussion is taking place.”

The Centre has been toying with the idea for quite some time now. In June, soon after returning to power, Modi had met leaders of various political parties having representation in parliament to explore possibilities of simultaneous elections. A committee will be set up by the government to further explore the issue.

In a major decision, Modi announced the creation of a chief of defence staff (CDS) as head of the tri-services. He said the CDS will ensure synergy among the three services and provide effective leadership to them.

A high-level committee set up to examine the gaps in the country’s security system in the wake of the Kargil War in 1999 had called for the appointment of a chief of defence staff as a single-point military adviser to the defence minister. A group of ministers analysing required reforms in the national security system had also favoured appointing a chief of defence staff.

In 2012, the Naresh Chandra Task Force had recommended creating the post of a permanent chairman of the Chiefs of Staff Committee. The CoSC comprises chiefs the Army, Navy and the Air Force and the senior-most among them acts as its chairman as per existing norm.

In the next few days, Jal Jeevan Mission will be among the focuses of both Central and state governments, Modi said, adding that Rs 3.5 lakh crore will be allocated towards it.

Among the issues he said he wants to highlight are that of population explosion and poverty. “Before a child is born in our home, we must ask if we have prepared ourselves to fulfil the child’s needs, or are we going to leave the child to its fate? No parent can be like that, who keeps bringing children to the world but forcing them to live such lives. Social awareness is needed on this,” the prime minister said.

“The country has to make its place in the world and has to make itself free from poverty. It is not a favour to anyone,” Modi said. “We have made many successful efforts to reduce poverty in the last five years.”

Easy of doing business, Modi said was “just a step.” Actual goal is ‘Ease of living.’

The prime minister claimed Rs 100 lakh crore will be spent on modern infrastructure to bring in employment and “new systems.”

“People’s thinking has changed. Earlier, people were happy with merely a plan to set up a railway station. Now people ask, ‘When will Vande Bharat Express come to my area’. People do not want only good railway stations or bus stations, they ask when is a good airport coming,” he said.

“To some, the target of nearly doubling the size of the Indian economy to $5 trillion in five years may seem difficult. But when we have in five years [of BJP rule] added $1 trillion as compared to $2-trillion size achieved in 70 years of independence, then this target is achievable,” he said.

Talking about terrorism, the prime minister said: “Those who give protection to terrorism and support it must be exposed.”

“Bangladesh, Afghanistan, Sri Lanka also are affected by terrorism. All countries in the world need to come together to fight this menace,” Modi said.

Making an appeal to all authorities to make arrangements to ensure “freedom from single-use plastic”, he said October 2 should mark the first signification step in that effort. “Gift cloth bags instead of calendar and diaries to cut down on single-use plastic,” Modi said. “Use of jute and cloth bags will also help our farmers.”

“Our priority should be a ‘Made in India’ product. Can we think of consuming local products, improving rural economy and the MSME sector?” the prime minister added.

There is a “huge” scope to improve India’s tourism sector, Prime Minister Narendra Modi said on Thursday, and it was imperative that the country meets the aspirations of its people.

He said the time has come to boost exports and that each district of India has much to offer. “Let us make local products attractive. May more export hubs emerge. Our guiding principle is ‘zero defect, zero effect’,” he said.

He said the world is eager to explore trade with India and the government was working to keep prices under check and increase development. “The fundamentals of our economy are strong.”