Except for the Minakhan assembly segment in the district, all other constituencies have come clearly under the influence of the Hindu-Muslim religious divide, helping BJP's campaign. Bongaon/Malancha: Brahman Chawk is an island, both in the literal and figurative sense of the term.

Surrounded by artificial fishing ponds, with intermittent stretches of habitation, the tiny village is part of North 24 Parganas’ Minakhan assembly constituency, which also is the biggest export hub of seafood in West Bengal. Vast stretches of land is covered with water where people of the area engage in fish farming.

While Hindus and almost an equal number of Muslims in the constituency stay mostly in separate villages, they are inextricably linked by the trade.

At the upper tip of Sundarbans, Brahman Chawk is inhabited by various Scheduled Caste groups who had migrated from bordering Bangladesh at one point. A resident, Tapan Das explains, “Fishing unites both the communities here. In this village, Hindus employ Muslims as workers, in some of the neighbouring villages, it is the other way around. There is no enmity here. We are always there for each other.”

The annual Hari Sabha in Brahman Chawk attracts a large number of people of both Hindu and Muslim faiths from in and around the village. Photo: Ajoy Ashirwad Mahaprashasta.

The communal harmony reflects at the village’s annual fair too. Brahman Chawk may appear to be unexceptional but draws huge crowds from neighbouring villages during its rather exceptional Hari Sabha, a Vaishnavite kirtan tradition in the state, around the time of Dol or Holi.

Brahman Chawk has been hosting the fair for the last 36 years. The performative Kirtan is extraordinary at a time when political forces have sought to bracket various faiths within strict boundaries. So sings the vocalist, “Krishna and Radha were one and the same. If a Bhakt (devotee) or a Brahmin tells you that Radha and Krishna were married, and that Krishna was Radha’s husband, he will go to hell.”

“It is sacrilege to think that Radha and Krishna were married. Their love was eternal, bound by one soul, not by social sanction,” he continues, as the crowd erupts in joy and devotion. He goes on to narrate various anecdotes from the Radha-Krishna canon. These are performed in Hari Sabhas across vast stretches of the state which borders Bangladesh.

Ahead of the assembly polls, people of Brahman Chawk swear their allegiance to Usha Rani Mondol, the Trinamool Congress MLA who is contesting again.

Says one of the organisers of Hari Sabha, “The Hari Sabha does not teach us to hate, it teaches us to accept people in the way they are.” He was referring to the widespread Hindu-Muslim polarisation that has, according to him, “caught the entire area by its neck”. “Look all around us. The Hari Sabha is not only a religious affair. It is also an opportunity for different communities to mix and celebrate our culture,” he says, pointing at a few Muslim men and women who had come to the mela (fair).

“Here people eat together,” he adds, again pointing at the community feast organised by the hosts.

Yet, it seems that the syncretism ends at Brahman Chawk and other villages of Minakhan. In its visit to multiple constituencies neighbouring Minakhan, The Wire found that the notion that Hindus and Muslims have different political interests is deep-rooted.

Hindus, largely refugee Scheduled Caste groups, have come to believe that Muslims, under the Trinamool Congress regime, have enjoyed a disproportionate share of power and access to resources. And that alleged “Muslim-appeasement” policies of Chief Minister Mamata Banerjee have short-changed Hindu groups.

The Wire visited different villages in various assembly segments of North 24 Parganas where Hindu-Muslim polarisation on communal lines stares at your face, unlike many other parts of the state.

In the Hindu-majority assembly seats like Haroa, Minakhan, Barasat, Barrackpore, Noapara, Ashoknagar, Habra, Kalyani, and Bongaon, where Muslims too live in substantial numbers, allegiance to faith has become the most significant factor in elections.

“All Hindus are silent now. They will speak on the day of voting,” Alok, a barber in Ashoknagar, tells The Wire, to indicate that his vote will be for the BJP.

Similarly, Pradyut, a lottery seller, in Haroa says, “We want to try a new party which will give us equal access to opportunities.” When probed further, he says Muslims enjoy the patronage of TMC leaders in the area, and that their community of Namashudras feel left out.

In most other parts of the state, the anti-incumbency sentiment against the TMC government is expressed in a sense of deep-rooted anger against local, allegedly corrupt, TMC leaders but with an acknowledgement that Mamata Banerjee has worked hard for the state’s unnayan (development).

But in these parts bordering Bangladesh, the chief minister appeared to be in the direct line of attack. “She has introduced a lot of welfare schemes but she has empowered only Muslims through those schemes,” says Paresh Pal of Habra.

The anger against “local TMC leaders” is simply replaced with “TMC’s Muslim leaders” among a large section of Hindus. The all-pervasive anti-incumbency narrative gets a communal edge that is directly helping the Bharatiya Janata Party (BJP).

“Most TMC leaders are Muslims. They corner most of the resources for their community only,” says one Pushpendu from Thakurnagar.

Much of this perception among Hindus is not grounded in reality. With around 26% Muslims, most of North 24 Parganas district is heavily dominated by Hindus. Barring a few seats like Deganga, Amdanga, and a few in the Basirhat block, where Muslims are in majority, Hindus dominate most of the 33 other constituencies in the district.

Yet, the sense of Hindu victimhood is strong and exceptional. “Muslims receive most benefits from even TMC’s Hindu leaders,” says Haripada, a tea-seller in Bongaon, while talking about the area’s block chairman and TMC strongman Shankar Addhya.

“There are no jobs, no quality education here. All of us fall in the Scheduled Castes category, for whom there is reservation in jobs. But now, Didi has tried to pitch us against Muslims by giving a quota to Muslims,” says Ratan, a recent graduate from the Matua community in Bongaon.

Again, such a perception is drawn from BJP’s campaign based on half-truths. True, the TMC government included a number of poor Muslim communities in the OBC list over the last few years, but it also included in the list quite a few Hindu caste groups. Moreover, the SCs and OBC have no direct competition while seeking jobs.

Yet, Hindu voters appear to have been entirely polarised on religious lines, and most of their assumptions that dictated their political choice either rested on half-truths or lies.

Along this Hindu-dominated stretch until Petralpol at the Bangladesh border, a new militant Vaishnavite culture, unlike what represented the Brahman Chawk Hari Sabha, appears to have emerged in recent times. Hindu-majority villages are marked by newly-built shrines of Hanuman, even as the BJP is campaigning with armed, aggressive images of Ram. 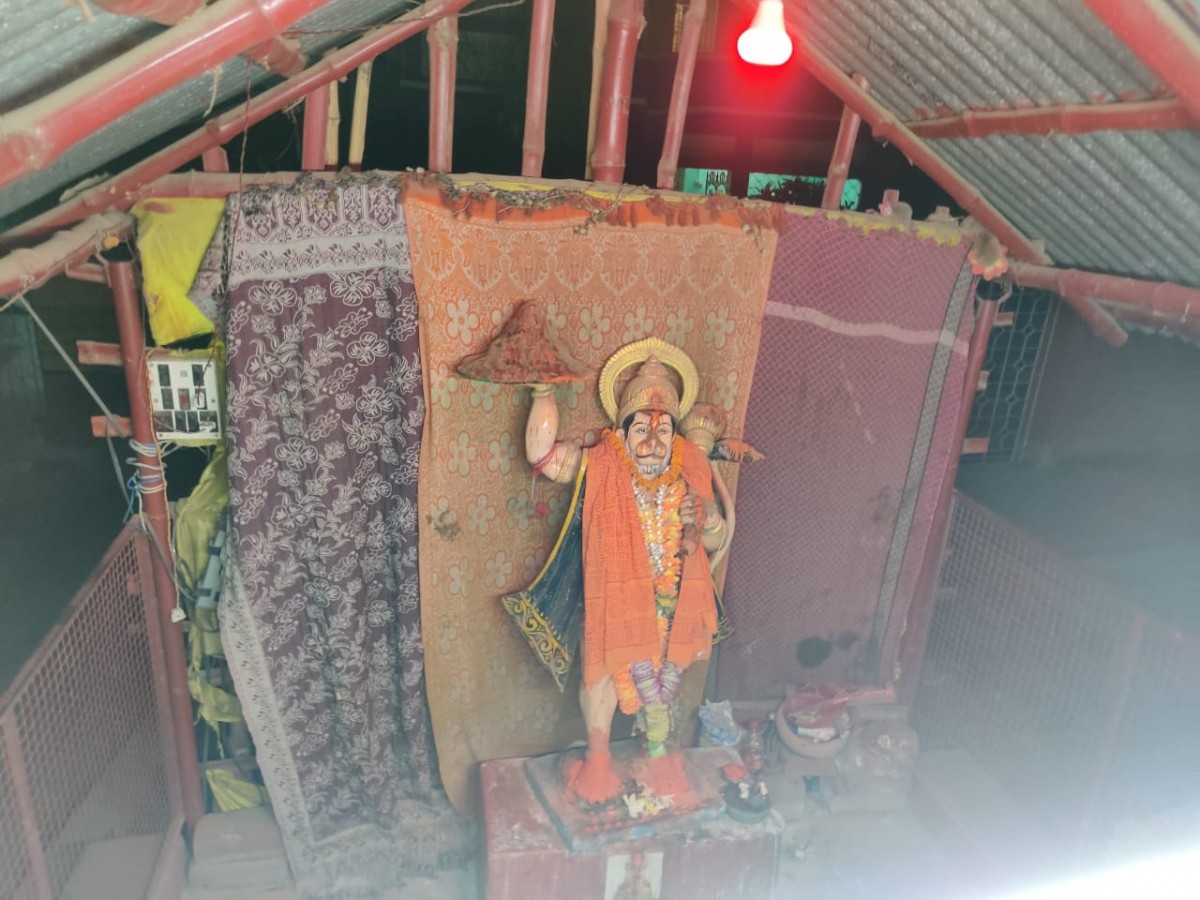 Flags bearing the “angry Hanuman” image created by Karan Acharya, a resident of Dakshin Kannada district in Karnataka, have become the most important signifier of BJP’s campaign.

In contrast, Muslims show overwhelming support for the ruling TMC and have become the strongest advocates of communal harmony. In most Muslim-majority villages that The Wire visited, people preferred TMC over BJP, although many of them readily acknowledged local-level corruption by TMC leaders.

“The TMC leaders here are selfish. Most of them and their associates strong arm their way to mobilise support. But we will vote for Didi. She has done a lot for the state,” said a plywood trader Ashraf in Amdanga.

“We believe Hindus are our brothers. Faith is a personal choice. It is a matter of great regret that politics today is solely dependent on dharmo (religion),” said a Muslim school teacher in Habra, who did not want to be named.

While being clear about their political choice, some Muslims expressed worry that the newly-founded Abbas Siddiqui-led Indian Secular Front (ISF) may weaken the TMC. “There is corruption at the lower level. In Amdanga, therefore, a lot of poor, uneducated Muslims are drifting towards the kham (ISF’s election symbol envelope). If ISF cuts into TMC’s vote, it will help the BJP,” says Ashraf.

As a result of such an unprecedented communal polarisation, the strength of the Left Front-Congress-ISF has been reduced, struggling to retain its traditional votes.

A teacher and a CPI(M) supporter Pushpendu Hazra in Ashoknagar explains the political phenomenon. “A lot of our supporters have turned towards the BJP. I am a devout CPI(M) supporter, my vote will be for the communists but I don’t think they have a good chance in this election.”

“It is more or less a bi-polar election, and TMC’s performance will depend on how successfully it can wean away Hindu supporters from the BJP. On the other hand, BJP will attempt to polarise even more,” he adds.

He explains that since 2016 the whole region has been witness to multiple low-intensity communal riots. “Some of them were big, like in Deganga and Bhaduria. Those became national news but many other such day-to-day incidents, which weren’t reported, helped the BJP consolidate Hindus against Muslims. Many of these riots happened over silly social media posts, or some other small issue. A month ago, we saw one communal tussle over excessive honking in our area. The violence ended in an hour but the incident is being talked about even now,” he says.

He adds that the saffron party tactically used politics of social engineering to expand its base. “It first campaigned against ‘TMC’s minority-appeasement” among Bangals (migrants from Bangladesh who are in an overwhelming majority in the region) and stoked their repressed anti-Muslim sentiment. Then through Acts like the CAA (Citizenship Amendment Act) created an impression among them, most of them who belong to poor scheduled caste groups, that only the BJP is concerned about them,” he explains.