In Rajasthan, Mob Justice is the Law of the Land

The attack on Sanjay Leela Bhansali is only the latest instance of mobs taking justice into their own hands while the Rajasthan government remains unperturbed. 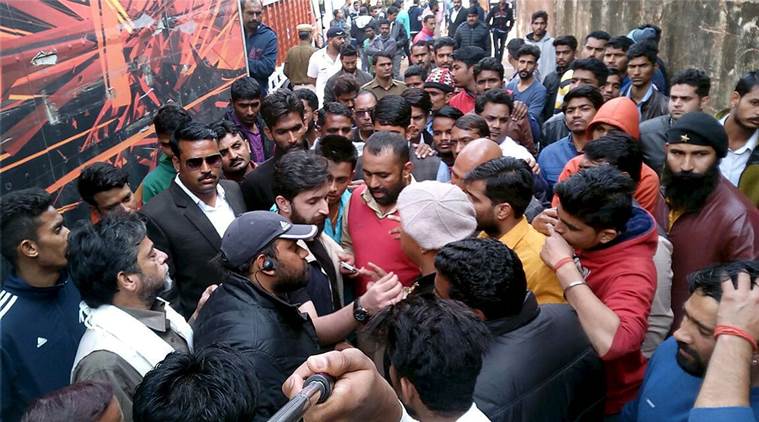 Jaipur : Silence is golden. Let justice prevail – whether mob or otherwise. The Rajasthan government seems to be following these adages with alacrity, tailoring them to suit its own needs.

Mob justice against a renowned Bollywood director, the government’s sudden withdrawal of a court case related to the burning down of a deprived community’s village, instant bail for a MLA in the police station itself – are just some of the instances that have raised eyebrows on social media as well as elsewhere in the country, but have not been able to stir the government.

So is mob justice a way of life in the desert state now?

The recent attack on director Sanjay Leela Bhansali in Jaipur has not elicited any official response or condemnation from the government till now.

Bhansali was attacked by activists of the Rajput Karni Sena, a social organisation of Rajput youths, on January 27 this year.

The mob vandalised the set at Jaigarh Fort where Bhansali and his team were shooting, pulled and slapped the director for allegedly shooting some intimate scenes between Rani Padmavati and Delhi’s Sultan Allauddin Khilji, being played by actors Deepika Padukone and Ranveer Singh for the film Padmavati.

The mob went on the rampage, “citing distortion of history,” by Bhansali, whom they criticised for allegedly filming a dream sequence between Padmavati and Khilji since it could never have happened as the queen had performed jauhar (self-immolation) along with 16,000 other queens to save their honour and escape from Sultan’s army.

Under pressure, Bhansali has had to cancel his shoot in Rajasthan for the time being.

But chief minister Vasundhara Raje, who is a regular on Twitter, has not tweeted a single comment on the incident nor has she made her views known elsewhere.

But this issue found echo in the parliament on Wednesday, February 8. Samajwadi Party MP and actor Jaya Bachchan brought up the incident during the Zero Hour in the Rajya Sabha, speaking about the “growing intolerance and threats to creativity”.

Dwelling on the issue, Bachchan said a “select few” assume that they represent the masses under “certain political patronage” and take law and order in their own hands.

She added, “They have no respect for constitutional values or the laws of the land. The incident has threatened creativity”.

Bachchan said the film fraternity, which strives to bring fictional stories to people through creativity for the sole purpose of entertainment, with some moral and social message included, has been the “soft target for these anti-social elements”.

“Sometimes they are threatened, sometimes films are not allowed to be screened, sets are vandalised and sometimes it takes a violent turn as happened in Jaipur recently,” she added.

She also said, “Bhansali is a renowned director, who has made great films and added that he had also staged the same subject of Padmavati as an opera in a Paris theatre in 2008”.

But in Rajasthan’s political circles, the matter is a closed issue, with one of the ministers even stressing that distortion of history would not be allowed. The Bajrang Dal and Vishwa Hindu Parishad also warned against shooting the film in Rajasthan.

Most political leaders, cutting across party lines, have not spoken out against the incident. They have been guarded in their reactions, presumably fearing disturbing their well-cultivated vote bank.

Rajputs form about 10 % of the state’s total population and have voted for the BJP is large numbers in the last few election cycles.

Questioned by the media, state home minister Gulab Chand Kataria only said that the police can only take action if those attacked file a complaint.

But interestingly, the government does not seem to be interested in going forward even when a formal police complaint has been lodged.

A  day after Jaya Bachchan spoke about intolerance, the Jaipur royal family jumped into the fray by issuing a statement on Thursday supporting the action of Rajput Karni Sena activists, saying that anyone distorting history will not be tolerated and before allowing any shooting in the  palaces and forts, the entire narration of the film would be necessary.

The statement from Padmini Devi, wife of the erstwhile and last maharaja of Jaipur, the late Bhawani Singh, and mother of Diya Kumari, BJP MLA from Sawai Madhopur, says the royal family has set up a different department for looking into the number of shootings that take place in their royal properties.

The statement says the said department did not provide enough details about Bhansali’ s shoot and hence action would be taken against erring officials.

Social activists Aruna Roy and Nikhil Dey’s team members from the Mazdoor Kisan Shakti Sangathan (MKSS) and Soochna Evam Rojgar Manch were attacked by a mob of 40 people, led by BJP MLA Kunwar Lal Meena, with sticks and stones at Aklera village last year in January. The place happens to fall in the Lok Sabha constituency of Raje’s son, Dushyant Singh. The women were slapped and beaten, and their cameras broken.

The activists were on the Jawabdehi Yatra, spreading awareness about government accountability across the state. They also alleged that the police just stood there as mute spectators.

They lodged a FIR against the MLA, who they say has a criminal background, seeking his arrest. But the MLA, allegedly a history-sheeter, roams scot-free.

The activists have pursued the case relentlessly, trying to meet Raje over the matter, who has not found time to meet them.

Despite the tardy and delayed investigations, a chargesheet was filed in the case early this year.

MKSS activist Dey said, “Around 25 people have been chargesheeted in the case. MLA Kunwar Lal Meena was arrested but strangely given bail in the police station itself, citing some Supreme Court order which says that if the accused is cooperating with the investigating agencies and if the conviction term in the case is less than seven years, he can be given bail at the police station itself.”

Dey added, “We have not heard of any such instances of giving bail in police station before. We will have to find out if such a precedent prevails in the state or anywhere else.”

Another surprising case is the 2014 Dhikola village case in Bhilwara district, where 42 houses of Banjara (nomadic) families were looted and burnt down completely. Even their motorcycles and bicycles were not spared. What remained after the carnage were charred grains, broken pots, burnt beds and mattresses.

A mob of around 2,500 people, armed with guns, iron rods, swords and sticks had attacked the village on August 19, 2014. No one was killed as most of the Banjara families at that time were away on a pilgrimage to Ram Devra in Jaisalmer.

The Banjaras were naturally frightened, shocked and angry.  All their savings had been wiped away in one go.

Largely nomadic and classified as a de-notified tribe, this set of Banjaras broke away from tradition to lead a settled life, working as farm labourers and buffalo traders in Dhikola village. However, owing to the stigma of a being criminal tribe that has been attached to them since the British period, even today they remain a highly oppressed and marginalised community.

The reason for the attack was mainly land grab due to a highway being constructed near the Banjara basti and a case of one Banjara man being given land for grazing that year, unlike previous years when a politically influential man used to get the grazing rights over that land.

After a FIR was filed at the Shahpura police station, the police arrested 46 people, who remained in jail for around five months. Around 141 people were named in the chargesheet and the matter was being heard in a lower court in Shahpura.

Some community members even met Raje in August 2014, who assured them that they’d get justice.

But last month, on January 21, 2017, when the Banjaras went to court for a hearing, they got to know that the state government had withdrawn the case and issued an order on November 23, 2016 itself.

The community members met Kataria in this regard, who also assured them that justice would be carried out.

But Dey said, “In my experience of several years, this is the first case I have come across when the government siding with the influential, the powerful  and the majoritarian, has withdrawn the case discrediting the already oppressed class. The message that goes out instantly is that instead of reaching out to the weaker sections of the society, this government stands to protect the powerful sections.”

Recently, on Febuary 2, a mining and environmental activist Radheyshyam Shuklawas, was beaten up in the office of State Pollution Control Board by the very people against whom he had gone to complain.

Shuklawas had gone to meet officials to seek a ban against a private stone crushing firm which was causing pollution and massive environmental degradation in the area. The ban order was issued on January 20, 2017.

Shuklawas said, “When I reached the office, the people from the private firm were already sitting there. On seeing me, they threatened me and beat me up. No official came forward to help me. I had to ring up police myself and then lodged an FIR myself. But no action has been taken against anybody till now.”

Kataria has, however, assured the activists of a fair investigation in the matter.

Activists say far from cracking down on mob justice, it seems the government, police and officials prefer looking the other way, thus stamping their approval on mob justice – now almost a part of life in this desert state.