The Uttar Pradesh legislative assembly elections will be held between February to March next year. Campaigning for the polls has begun and it is not unusual for the incumbent government to make assertions about the milestones it has achieved in the past years. On July 15, PM Narendra Modi inaugurated various development projects in UP and praised chief minister Yogi Adityanath’s governance.

During the length of the 30-minute speech, the prime minister made various claims and among them were false or misleading statements. There were also instances where the PM presented his favourable opinions about BJP’s governance as facts.

Between 7:15 to 7:42 in his speech, the Prime Minister said, “Today UP is the state that conducts the highest testing and vaccination in the country…”

According to COVID19India.org, Uttar Pradesh has conducted the maximum number of tests. But UP is also the most populated state in the country. 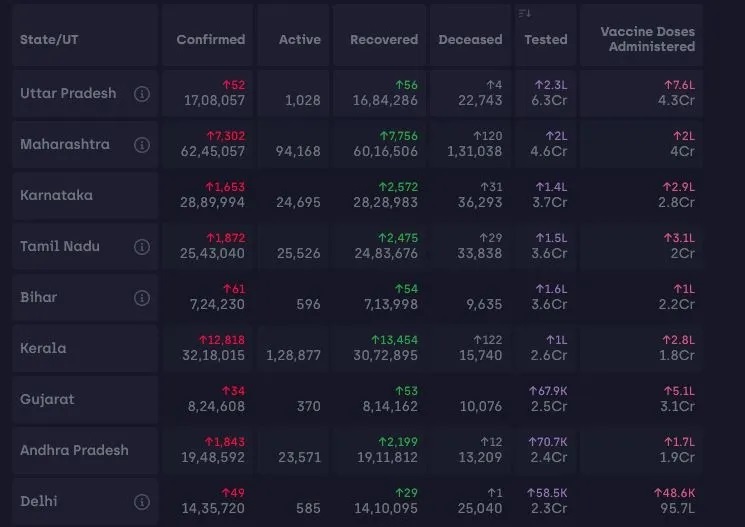 Similarly, UP has administered the highest total number of COVID vaccine doses (first+second dose), as per the latest (July 26) data of the MoHFW. But when the data is analysed as a percentage of fully vaccinated people per lakh, a different story emerges.

Alt News calculated the number of fully vaccinated people per lakh of population in each state based on the number of Aadhaar cardholders.

As per this data, UP has 3,516.89 fully vaccinated people per lakh population. It is the second-lowest and significantly behind the national rate of 7,575.84. (view spreadsheet) 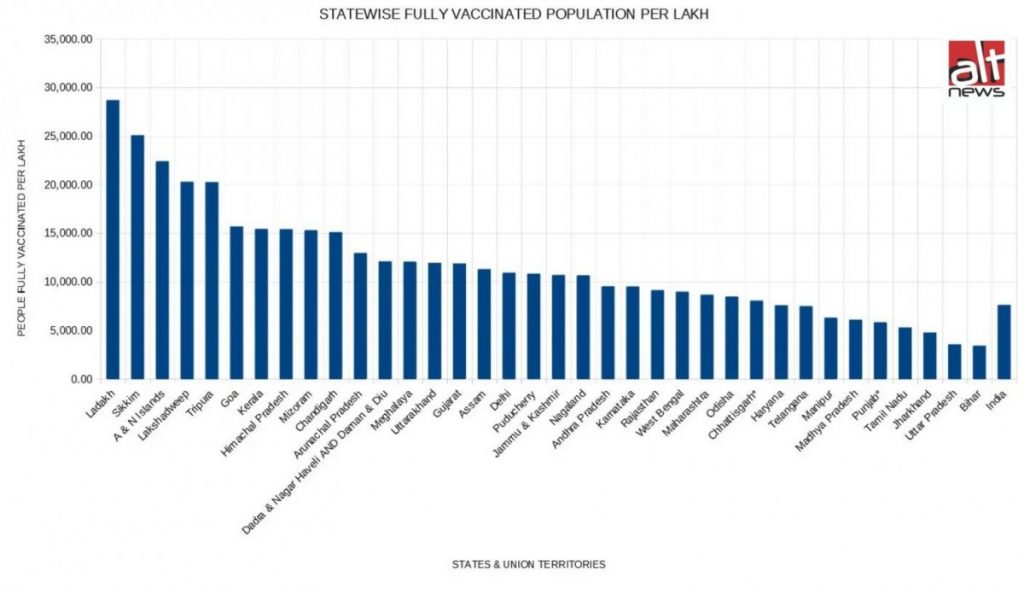 While the above statement could be directly countered with data, PM Modi made other misleading remarks that ignored the ground reality. While he praised CM Adityanath’s handling of COVID, terming it as “meritious”, the prime minister omitted to mention the thousands of dead bodies found floating on the Ganges or cremated along its banks when the second wave was at its peak.

The prime minister also claimed, “Until four years go Uttar Pradesh had only a dozen medical colleges. Now they have increased by 4 times…”

CM Adityanath took oath as Uttar Pradesh chief minister in March 2017. As per MoHFW data, UP had 38 colleges in 2016.

Claim 4: UP is safe for women under Yogi’s tenure

PM Modi also applauded the “rule of law” in Uttar Pradesh. “Parents used to live in fear and uncertainty about the safety of their daughters. This has changed. Those who harass our sisters and daughters know they can not escape the law and order,” he said, ironically only months after the Hathras gang rape that brought widespread criticism for the state government’s handling of crime against women, especially Dalit women.

The 2017 Unnao rape case had also revealed UP’s mishandling of sexual crimes. It took two years to punish BJP leader and MLA Kuldeep Singh Sengar accused of raping a minor and only after she tried self-immolation outside the CM’s residence and her father died in judicial custody.

According to the latest data (2019) on the National Crime Records Bureau (NCRB), UP is the largest contributor (14.7%) to crime against women in the country. The data from the previous report also indicates the same.

Alt News studied the latest NCRB data found that the following stats indicate an alarming situation in UP:

The prime minister praised the UP government on several counts, exaggerating its achievements and presenting his opinion of CM Adityanath’s governance as facts. He disregarded COVID deaths and oxygen shortage in the state, instead praised the CM’s work without presenting accurate data. UP contributes the most to crimes against women, yet the PM said that women now “feel safe” in the state.